We had seen a notation on the road map for the Mountain Man Museum in Pinedale, Wyoming, so we headed that way, camping at Freemont Lake for the night. This period of history, from about 1820 through about1845, has always been of interest for Marlin. He has read about all the heroes and legends from that era, so we were hoping this would be an interesting stop and we were not disappointed.

Local town folk from as far back as 1935 have been collecting period artifacts and information about the fur trading years. It has been an ongoing project within the community to collect, store and exhibit these materials. Pinedale is located on the Green River, where six out of the sixteen “Rendezvous” took place.

Rendezvous was the time and place, once a year, where the fur trappers came out of the mountains to met with buyers and vendors, to sell there beaver pelts and re-supply themselves for the next year of trapping. Before the creation of rendezvous by William Ashley, the major fur companies built trading posts, or houses, that Indians and trappers traveled to in order to sell their winters work.

In 1825, Ashley, after several setbacks in the fur business, set out, with wagon loads of goods to exchange supplies for beaver pelts, on Henry’s folk in the Green River. What started as a one day experiment in 1825, with about 120 participants, evolved into a month long event, that, at times, included as many as 3000 trappers, fur buyers, vendors, and Indians. Word of mouth carried the location of the yearly event as it moved from place to place. However, with the decline in the demand for beaver pelts, which coincided with the change in fashion from beaver, to silk top hats, the last rendezvous was held in 1840.

One of the things I enjoyed here was the biographical sketches on some of the well known people in the fur trade such as Kit Carson, Jedediah Smith, John Colter, and William Sublette, to name only a few. Most of the stories almost sound fictitious, they are so full of extreme endurance and bravery. The biographical sketches added background into the lives of these hero’s in addition to the better known legends that you hear about them.

Some exhibits had handouts that elaborated on information that pertained to an artifact. For example, near a case enclosing original native beaded clothing was a paper detailing the creation of glass beads in Europe and how they spread all the way to the American West. Another handout retold the story of how the wife of a fur trader, who was murdered by Indians, escaped and successfully traveled from southwest Idaho to the Columbia River with her children ages 2 and 4. This saga occurred over the winter of 1814, and when the snow got too deep to travel, she built a shelter from a buffalo robe and three deer skins, killed their two horses for food, and continued on foot when the snow melted.

We spent most of the morning going through the museum and talking with the woman who was the current director. She provided us with lots of local background about the museum and the town in general. The staff was getting ready to change the exhibits with replacements from their two auxiliary buildings full of artifacts. They would love to have more space but believe fund raising for an additional building has reached max from their small population. 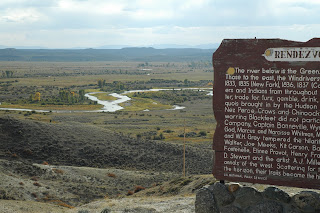 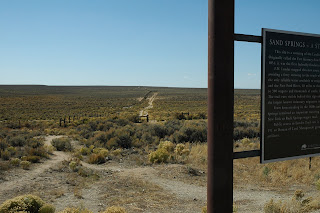 The North fork of the Oregon Trail. Looks like you could follow the tracks today all the way to Oregon. This was just past Pine Dale, WY in Sand Springs. This north fork was established to cut off five days of travel and eliminate a ferry crossing where price gouging was common.