The predominant phrase I hear over and over since we got here is “another day in paradise”. The beauty never ceases to diminish by familiarity. Our first three days here we mostly lounged around between the ocean, pool, patio (lanai), or walking on the beach. On Saturday, when family and wedding guests began to arrive it forced us to stir out of the lounge chairs a bit more often, but not too much. 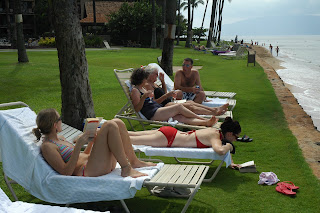 A tough day in Maui


Linda and John Miles asked us to vacation with them here on Maui during the week one of their nephews planned to get married, the same week his brother was participating in an Xterra event here on Maui. Tough invitation to turn down. The wedding, on Tuesday the 23, boasted 38 friends and family members who came to Maui from New England, for the occasion. The ceremony was performed by a local Hawaiian woman, who included traditional Hawaiian elements, making this an exceptionally moving event. 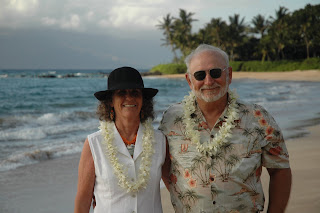 All the guests received lei's, a gift from the happy couple 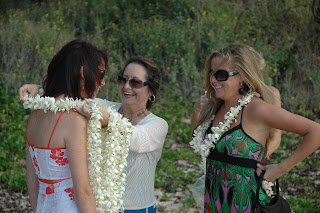 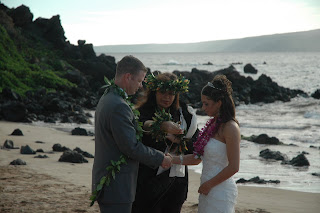 Steve and Jackie Hughes with the Hawaiian Kahuna 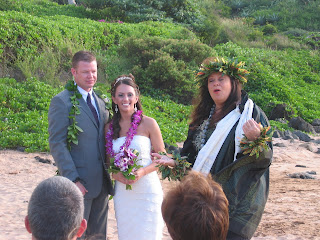 One highlight, aside from the wedding, was a trip to Hana, involving a 44 mile one way drive, over a narrow winding mountain road that over hangs the ocean on its way through the rain forest. Waterfalls and black sand beaches are seen at almost every turn. Frequent banana bread stands also tempt additional rest stops, so the trip is an all day affair.

Keanae Point has the most spectacular shore line, piled with raw lava boulders, where the blue-green waters crash on the black rocks and send spray high into the air soaking anyone standing near the shore trying to get the perfect picture. Our favorite travel book “Maui Revealed” tells us that this is the younger part of the island and the lava has not yet been beaten into beach sand.

The Keanae Arboretum had an extensive collection of trees and plants that grow in tropical rain forests around the world. The best part was that they were all labeled so we knew what we were looking at and where they grew naturally. Of course that information stayed with me for at least 20 minutes. 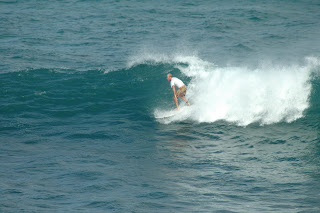 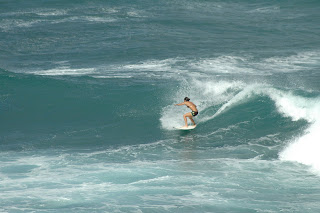 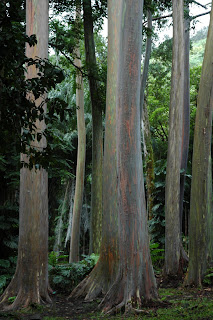 Keanae Arboretum - Painted Gum trees. We like to call them rainbow trees. 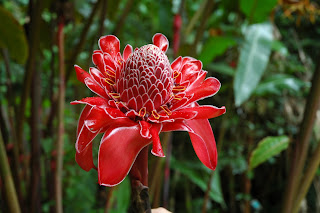 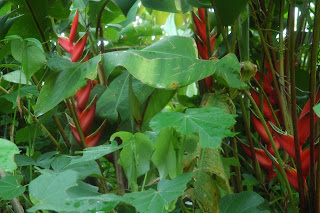 I think this was called Lobster Claw 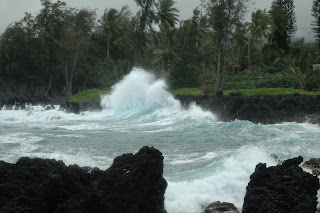 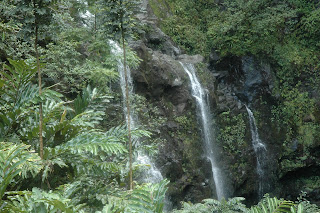 
After several more waterfall stops we arrived at Wai‘anapanapa (pronounced why-a-nah-pah nah-pah) Park, which is one of the fun Hawaiian words to let roll off your tongue. We brought a picnic lunch and watched the mongoose looking for handouts from lunch leftovers, while we ate. These critters look similar to ferrets. This park has two fresh water caves contained in old lava tubes. The pools come with a legend about a Princess who left her abusive husband and hid in one of these caves. Finding her, he killed her there and once a year, hundreds of shrimp appear and color the water red in her memory.
Past the caves, the trail drops down to U shaped Pa’iloa Beach with pure black sand and pebble sized ebony rocks. “Maui Revealed” tells us that these black beaches are truly formed in a day (or two). When the hot lava flows into the sea, it shatters on contact with the ocean, forming this distinctive black sand. The down side is that these beaches do not last long (500 years) because when the lava stops flowing into the sea, the source of the black rock is gone and cannot regenerate like white sand beaches that are made of shell and coral that continue to break down. 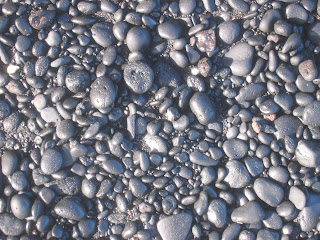 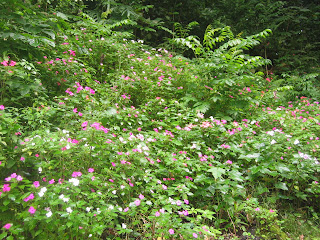 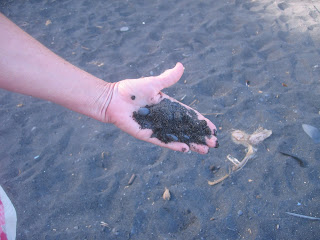 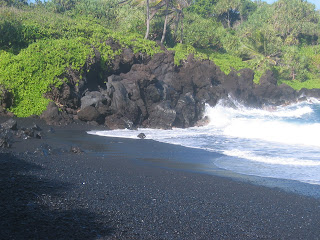