After 2,873 miles, we have arrived at Bentsen Rio Grande Valley State Park and World Birding Center in Mission, Texas.  Off to a great beginning.  As we were getting set up, three Great Kiskadee's landed near our truck to greet us.  First day, first new bird. We had to scurry through the bird book to identify the beautiful yellow bird.  Pictures to follow at a later date (hopefully), since these birds are common here in the park.

We met briefly with several of the staff, checked out the office facilities, and received some books and schedules on park programs.  A "Creatures of the Night" program was scheduled for  that evening  at 6 PM and we were told we were welcome to join if it was not full.  Our luck held and two people canceled at the last minute.  The event was more than a 10.  We heard several screech owls, listened to bats send out clicks to locate and zero in on prey (with the help of an electronic "bat box"), learned how to spot wolf spiders at night with a flashlight held next to your temple, located a tree bark scorpion on the trunk of a tree using an ultraviolet light, and to top it off, saw a bobcat about to gobble up a cottontail.  He missed, but our lights did not scare him away. He or she stood at the edge of the woods and gave us some glaring looks.

The next day we did some serious reorganizing, got groceries, then Marlin met with Javier, the Assistant Park Superintendent, and two volunteers about several maintenance projects that he will be working on.  I got a short walk in the park.  Only foot and bicycle traffic are allowed within the park boundary.  Feeding stations abound, complete with padded and covered swings for extended viewing.  My walk only covered about a half mile due to long stops at every feeder I passed.  Dozens of Green Jays, Kiskadees, Altamira Orioles and other birds seemed common after this short walk.  A birder's paradise, I'm thinking.

Tuesday we got our schedules and volunteer uniforms, received training on the two four wheeler vehicles, toured the nature center then took a nap! 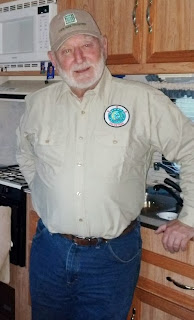 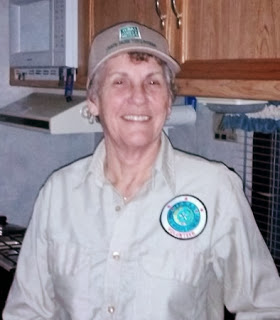 We crossed the line into Texas on December 22, having traveled Louisiana from Vicksburg to Shreveport, then over the border into Marshall, Texas, where we spent one night at the Circle M RV Ranch.  Our plan had been to make it as far as North Houston, but since we choose a longer route, that goal waited another day.

Usually we see Marlin's cousin Judy Covert at her home in Lillian, Alabama.  This year, however, she was visiting with her brother Rick and his wife Pam in Humble, TX, just north of Houston.  The last time Marlin saw Rick he was a toddler in diapers, so it was great to make the connection for the first time with the adult version.  Rick and Pam work nights so we attempted to take Judy for a walk through Lake Houston State Park.  Unfortunately, the park was closed for the holiday so we opted for coffee in our camper.

Pam and Rick invited us to share dinner with them during the next two nights, which included Christmas eve.  It was strange to be away from home on this holiday but wonderful to have new friends and extended family to celebrate with.  After dinner on Christmas Eve, we played a dice game Judy Covert had taught us in the past.  Judy won, as usual.  With her perpetual luck you would think she could be a successful gambler at a casino.  Guess she is content to trounce family in card and dice games. 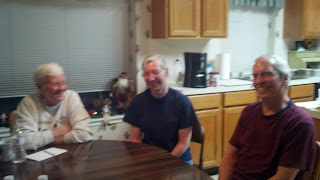 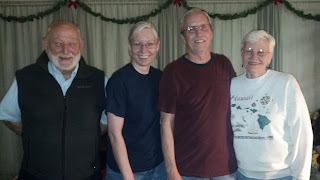 We left the North Houston area on the 26th and sailed through downtown Houston  without experiencing any traffic problems.  Last night, and again tonight, we are camped at Goose Island State Park located on the gulf coast.  We have heard much about this campground on our previous Texas travels.  It always seems to be full and anyone who has been here raves about the facility.  Park staff recommended we camp on the ocean side campground, due to the low overhanging trees and narrow entry slots at the forest campground.  We followed their recommendations and located an easy to pull into site.

This part of the park  resembles a whale's tail shaped spit that extends past a natural inlet where the boat landing is located.  Yesterday afternoon we walked out to the end of the long, long, long fishing pier. 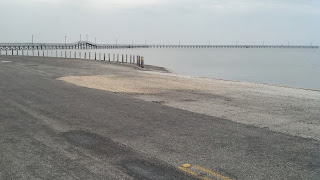 The water looks to be only two or three feet deep, with extensive oyster beds as far as you can see.  Even the sand bar appears to be made of oyster shells. 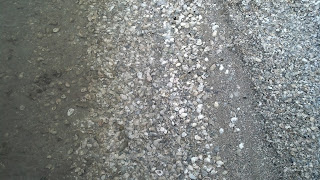 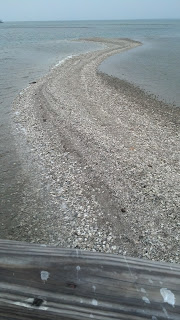 This morning we walked from this campground over to the forest section. 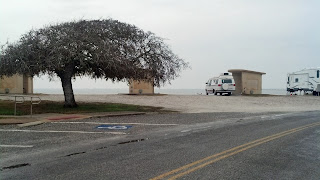 The ocean side sites are directly on the gulf. 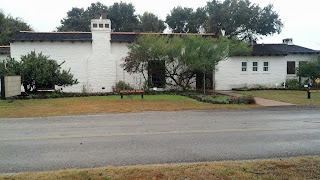 This recreation building was built by the CCC in 1933.  One more of the many CCC projects we have seen in Texas parks. 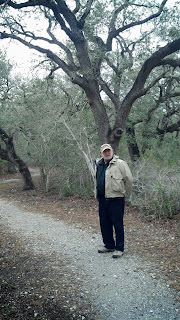 Part of our walk was on the Turks Cap trail.  The oyster shell path lead through a thick forest of live oaks that reminded me of the Hobbits going through the enchanted forest. (minus the oyster shells) 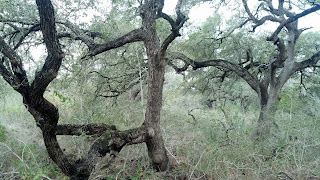 A thick tangle of twisted branches could be quite creepy if you let your imagination run wild.

We wandered throughout the forest campsites and decided it was much larger and more to our liking than the ocean side. The sites were no where as intimidating as we were led to believe.  My personal driver could back into most of them with ease!


When we were returning, we again crossed the channel inlet where the boat landing was located.  It was just after noon and several boats were coming in and several going out.  Some were fishing boats, but most were powerful air boats carrying duck hunters out to duck blinds somewhere in the bay.  We were fascinated, not only by the boats, but by the well trained Labrador dogs riding along with the hunters. 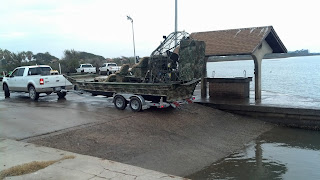 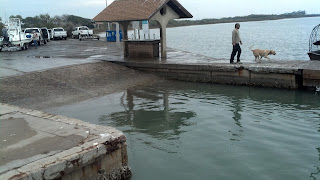 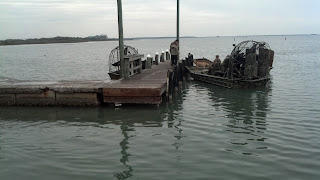 After our 2 hour traipse through the park, this was Marlin's next activity! He is excited to have such a comfortable couch. 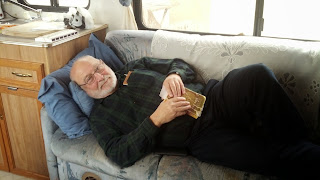 Tomorrow we will head for Bentsen State Park in Mission, about 100 miles south of here, and begin our new volunteer job.
Posted by cooktravelogue2007-8.blogspot.com at 7:50 PM 1 comment:

Traveling south usually includes a visit to Huntsville, Alabama to touch bases with my long time friend Kathy Gallagher Lundy.  This trip only allowed us a quick lunch and afternoon visit since she and her husband Rusty were leaving the next morning for Mobile.  Over lunch and tea at her house we were able to squeeze in lots of gab about family, kids, grand kids, and mutual friends along with promises for a future get together. 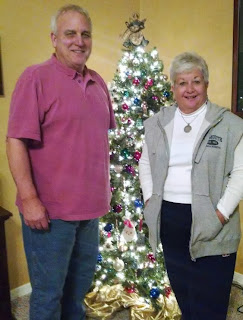 Kathy worked for the NASA Marshall Space Flight Center in Huntsville for many years.  We were often treated to "extra" tours of the facility on our visits.  This trip we camped in the RV area on the grounds of the Space and Rocket Center and although we did not take the time for a tour, we did walk around the grounds and take a few pictures, as well as reminisce about all the amazing projects and experiments we had witnessed in the past . 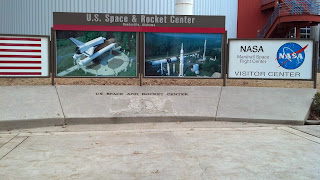 Although Marshall Space Flight Center was not responsible for developing the space shuttle vehicle, it was responsible for all of the rocket propulsion elements. This  facility developed the three main engines on the shuttle, the external tank that the shuttle rides on top of, and the rocket boosters attached to the sides of the vehicle.  It was also responsible for Spacelab, the research area carried in the Shuttle's cargo bay on some  flights.

From the start of the shuttle program in 1972, the management and development of Space Shuttle propulsion was a major activity at Marshall Space Flight Center.  On one of our tours we were treated to a private tour of the area where these huge rocket engines were tested.  The engineering of just the testing structure was mind boggling.  It is incomprehensible trying to imagine how they designed the entire engine. 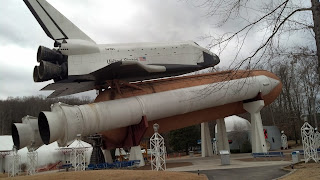 This shuttle model (now named Pathfinder) is the simulator  built at the Marshall Space Flight Center  in 1977 to be used for  tests such as  road clearances, crane capabilities, and how the shuttle would fit within structures. At one time it was used at the Kennedy space center for ground crew testing.  Pathfinder is approximately the same size, shape, and weight of an actual Orbiter. Using this model for non mission activities allowed for support crew training without requiring use of the more delicate and expensive space shuttles.
At one point it this mock-up's life, the model was on view in Japan, then refurbished and returned to Marshall for display.

Walkways leading up to the visitors center have multiple signs about space activity and the planets.  They are informative regarding the relative size of each planet as compared with the size of the sun, the planet composition, and the date when they were photographed by Voyager 2.  I wonder if Lola can get a look at our close neighbor, Venus, with her new telescope? 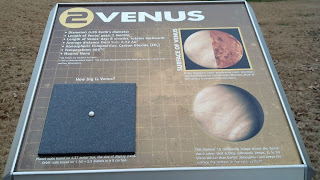 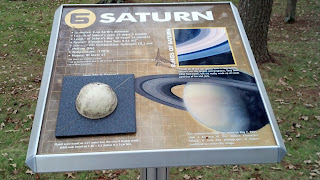 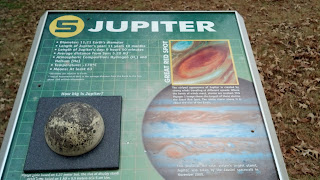 At the time of Voyager 2, an approach to Pluto did not seem possible due to distance and its small size.  However, on January 19, 2006 a mission, titled New Horizons, was successfully launched to explore Pluto.  Its closest approach to Pluto will be on July 14, 2015.  NASA is still doing some amazing space exploration even though we do not hear much about it.


Another tidbit for Lola!  The sign below commemorates "Miss Baker" the first astronaut to go into space.  It was quite a big deal at that time.  Scientists had no idea what would happen to any mammal when up in space.  Miss Baker's trip was a success. 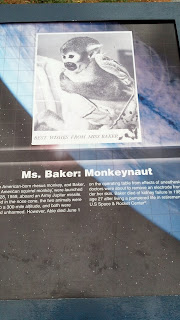 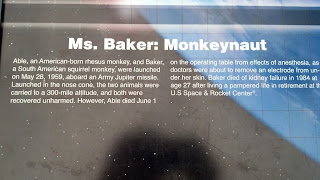 This one is for Jed.  Picture yourself flying this beauty.  There is no notation of why this fantastic plane is displayed here but it is awesome to look at.  If you single click on the picture it will become full screen and you can read the specifics on the sign. "New York to London -  1 hour 54 minutes!  I'll take it. 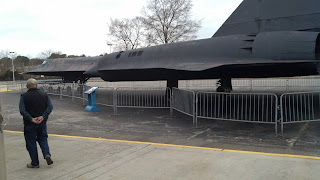 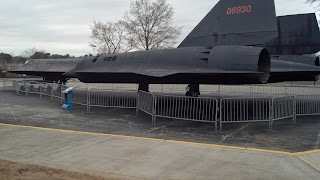 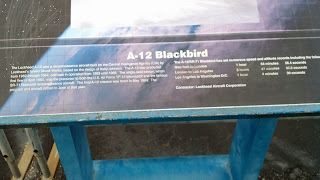 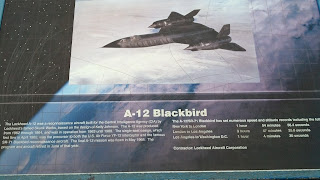 The grounds and buildings are  not as well cared for these days.  They show the results of some severe budget cuts.  Maintenance is usually one of the areas that get reduced first.
Posted by cooktravelogue2007-8.blogspot.com at 11:10 PM No comments:

Our 2014 new winter adventure is underway.  This year our departure was delayed, not the usual three or four hours due to some absent minded error, but a three day hold over to avoid our first winter storm.  Instead of heading out on December 13 as planned, we left on Monday the 16th after plowing about 12 or 14 inches of beautiful light fluffy snow. 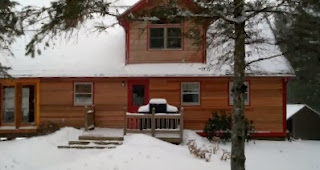 It was a wise decision since we saw deep snow on the ground all the way to Virginia.  Monday night the temperature was 14 degrees in Scranton, PA so we stayed in a hotel.

Tonight (Tuesday) we are at a campground just south of Roanoke, VA, where the temperature at 4PM was 45 degrees.   Quite a learning curve for setting up this new camper.  Not only remembering how to hook up this and that, but finding all the little glitches, like missing washers in the water hose, finding which key belongs to which lock, or opening cabinets and having pans tumble out.  Shortly after we completed all the outside tasks a rain squall roared through for about half an hour, so despite our fumbling set up time, we we were at least inside before the down pour began, thus avoiding a soaking.  At least the rain washed away one layer of highway mud.  We keep eying the signs for truck washes but I guess we will wait till we reach Texas to give it a good cleaning 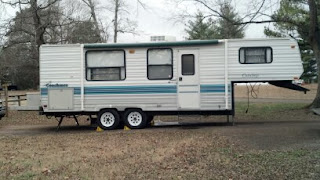 Looks like our route is going to take us through Huntsville so a stop to visit Kathy (Gallagher) and Rusty Lundy will be in order when we get that far.
Posted by cooktravelogue2007-8.blogspot.com at 8:49 AM No comments: