Moving south, we drove through Flaming Gorge National Monument, stopping at a few overlooks for pictures of the red canyons and reservoir, but continuing along toward Dinosaur National Park, which is located on the border between Utah and Colorado. The Utah section is where the large deposits of dinosaur bones were found in an eroded sandstone deposit on the banks of the Green River. The Carnegie Museum in Pennsylvania has 12 complete dinosaur skeletons taken from this location. After excavating thousands of bones from this cliff, it was decided to leave the remainder in place in order that they could be viewed and studied as they were found.

A visitors building was built utilizing the rock face, where millions of these bones still remain, as the back wall of the structure. Visitors were able to watch paleontologists while they worked at revealing additional skeleton pieces cemented in the sandstone rock. Unfortunately, last year the foundations in this unique building began to crumble and it was closed in the interest of safety. Estimates for reopening were given as 3 to 5 years.

So, we only got to see a few bones displayed at the temporary visitors center. However, there was a great campground right on the Green River that we stayed at for three days. We had a huge site so we took the opportunity to set up our new screen tent, then just lazed around and enjoyed it.

One hike we took paralleled the Green River with views of an eroded rock mound called Split Mountain on the opposite river bank. The path ended at a large deserted campground with a boat landing that was currently in use. Walking through this “ghost town” facility was eerie. Two sites closest to the boat landing were still open for large groups, most likely held for Green River rafting excursions. The ranger we asked about the closure did not have any explanation. Maybe he was new in the area.

Down a long dirt road, in the adjoining BLM (Bureau of Land Management) land, was the remains of a homesteader’s ranch. This had belonged to a woman named Josie, who came here in her 40’s, built a small log cabin, raised her food and some stock, using water from a local spring. At one point she was involved in a dispute over the water, with the final ruling declaring that if her spring water entered the stream claimed by the other defendant, that water would also belong to the person with stream water rights. This did not stop Josie. She made multiple ponds, and even flooded her fields to contain ALL her spring water. Tough folks here in the west where water is the most valuable commodity.

We hated to leave this tranquil spot, however, we needed to heard toward New Mexico and still wanted to stop at Canyonlands National Park, so we headed out on Monday, 9/24 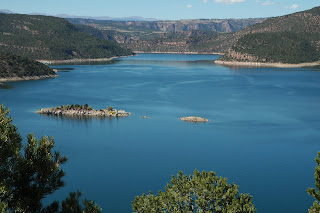 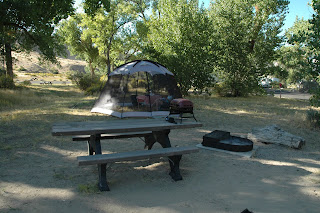 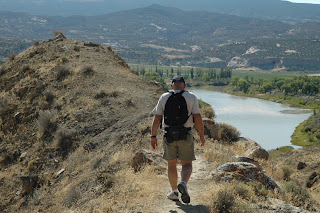 Finally, Marlin's back side instead of mine. 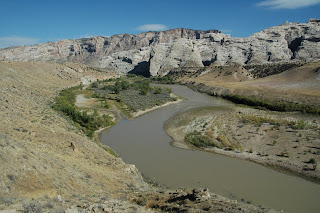 The Green River with Split Mountain in the background
Posted by cooktravelogue2007-8.blogspot.com at 12:16 AM