Another long pause from posting travel information makes me feel like a poor communicator. Again, limited access to internet but also working with a deadline to be in Las Vegas by the 18th, put bloging on a back burner for awhile. In trying to catch up I realized that we really had packed more adventures into that short time frame than we thought possible.


After leaving Albuquerque, along with Chuck and Julie, we visited several sites containing pueblo ruins. In the past the people who built these south western complexes were called Anasazi. However, within the last decade, the twelve tribes who are descendents of these builders have rejected the Navajo label Anasazi and prefer to be called Ancestral Puebloans. One ranger explained that the Navajo came to this area after the Puebloans abandoned their cities and the Navajo term, Anasazi, means ancient people or ancient enemy. Today’s pueblo dweller descendants now wish to change that label.

The first ruins we visited was the Aztec Ruins in Aztec New Mexico. Some of the original Anglo settlers, believing this site was built by the Aztec people from Mexico, miss-named the town and the name stuck even when the true origin of the builders was identified.

Aztec was a large planned city with excellently constructed brick work of over 400 contiguous rooms and a large central Kiva, that has been rebuilt. This city of ruins, although unprotected by overhanging cliffs, retains complete rooms, undisturbed T shaped entry ways, and some perfect 90 degree corners, indicating that there was a master plan for the organization of the entire complex. 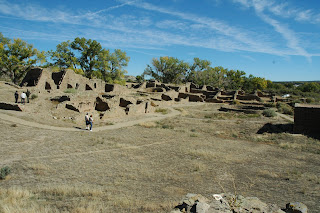 The site was first uncovered in 1859 by a geologist named John Newberry. However between then and 1889, looters and settlers seeking building materials, removed countless artifacts, including some human remains.

In 1916 The American Museum of Natural History began sponsoring excavations and in 1988 Aztec became a National Monument. There is another section of ruins, the East ruin, that is only partially excavated. 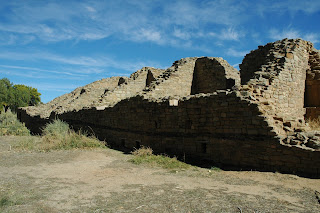 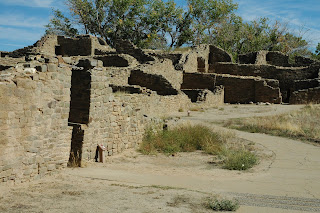 
More ruins are viewable at Mesa Verde National Park, Colorado, where the journey begins on a winding mountain road that rises from the desert floor, traveling up over 15 miles, to an elevation of more than 8000 feet at the park entrance.

This mesa resembles a hand with fingers splayed and deep canyons between each finger of land. At one time hundreds of villages and farming areas covered each of these areas. Archeological findings indicate that Mesa Verde was inhabited for at least 700 years before being abandoned as were the many other villages in this four corners area.

The four corners is where Colorado, Utah, New Mexico and Arizona all meet at the same spot. You can actually go to this spot and stand in all four states at once. When viewing the many cliff dwelling sites you pass back and forth between these states often, sometimes it gets very confused as to just which state you are in.


Unlike the Aztec ruins, Mesa Verde’s city complexes, that were built on the mesa top, have not stood the rigors of time and weather. Remains of the dwellings are only low walls and towers outlining past buildings. However, Mesa Verde’s gems are the many superior cliff dwellings that are almost intact and can be visited with a ranger tour guide. As in other ruins, it appears that the majority of residents lived on the mesa tops, where crops of corn and squash were grown. At the Far View Village, on the mesa top, irrigation ditches and farming terraces were spread out for acres around the village.

The origin and reasons the cliff dwellings were constructed has many theories, however, these spaces held a much smaller number of people than the cities above. We were able to tour two of the cliff sites. Balcony House, which is a smaller cliff dwelling but the most challenging to get in and out of. It requires climbing up a 30 foot ladder to enter, and crawling through a 12 foot long, 18 inch wide tunnel to get out. Archeologists believe this site was occupied by two families. It contains two Kivas, which are now thought to be living quarters during cold times. Today’s Hopi Kivas are used for ceremonial purposes, so researchers first assumed the same function for the ancient Kivas. Newer theories, based on recent evidence, point to a more utilitarian use.


The second site we were able to see was Cliff Palace, a much larger complex, although, again, archeologists theorize many of the rooms were used as storage for grain. At Cliff Palace, the masonry shows many different makers. Some of the walls are made with precisely cut and placed bricks, while others, right next to them, are somewhat slap-dash in their construction. To quote the ranger, “looks like everyone did there own thing here”.

Ancestral Puebloans lived in these cliff dwelling for less that 100 years. As in other puebloan sites, it was deserted around 1300. Some theories are that the last quarter of the 1200s saw extensive and prolonged drought and crop failure that may have caused a southern migration. It is also thought that hundreds of years of intensive land use depleted the soil, or maybe there was social or political disturbances that caused communities to dissolve. Good guesses, but it looks like we will never know the real reasons.

There are many more sites and trails available to see at Mesa Verde. However by the time we finished our two tours, it was late in the day, in fact, we were just able to grab a cup of coffee five minutes before the café closed at 5. Another place we have put on our list as a “must return” site. We could not return tomorrow because we had to move on toward Las Vegas by the 15th to meet Linda and John Miles. 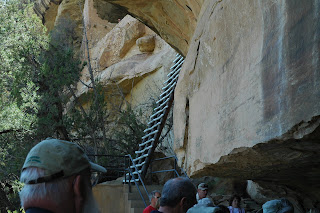 The only way in 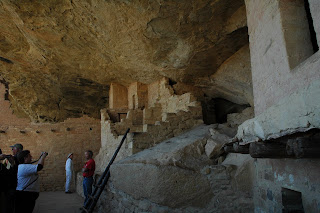 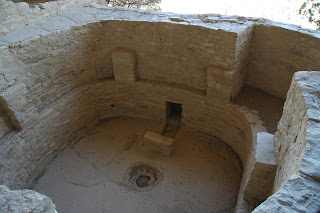 One Kiva, minus the roof 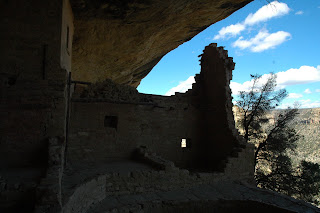 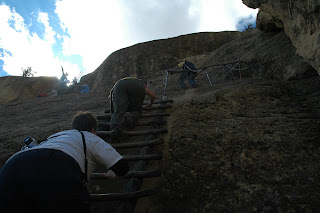 The only way out 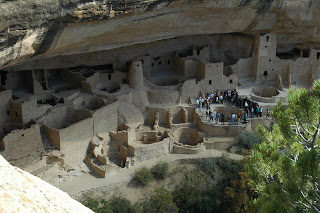 Cliff Palace from above 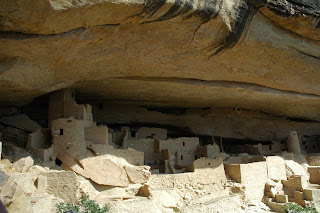 We left the Burwells in Cortez the next morning and traveled on to Monument Valley where John Ford made many of his John Wayne movies. These magnificent red buttes and stark mesas rise up out of the flat landscape into namable shapes, such as left and right mitten. The light in the southwest is entirely different than what we see in the east, but the dawn and sunset illumination is like nothing you see anywhere else. The red cliffs seem to be on fire as the sun sinks lower and lower in the evening sky. By closing your eyes, you can almost see John Wayne and the Calvary galloping at high speed between the buttes, dodging the Indians as they pour down off the mesas. 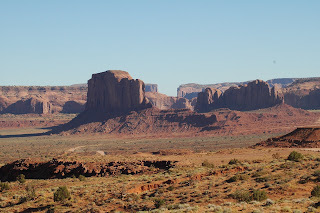 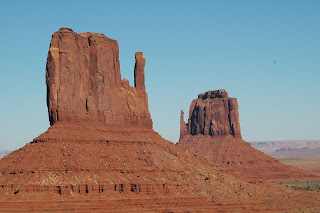 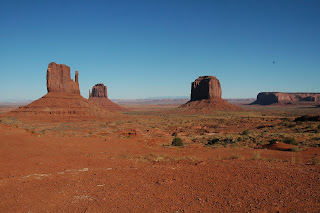 We stopped briefly at the Navajo National Monument, which was not far from Monument Valley, and is another site where cliff dwellings are well preserved. Their ranger tours ended in September, so we were only able to view this place from high on the opposite canyon wall. It was a pleasant walk down to the viewing site and with our binoculars we got a decent look into the 450 foot high cave where the135 rooms housed over 100 people at one time. 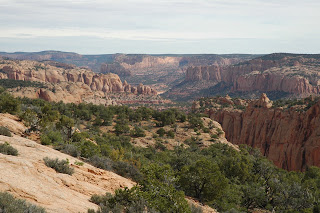 The canyons at Navajo National Monument 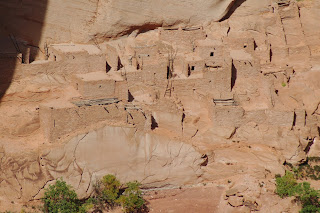 The village built inside the cave shown below housed about 100-125 people. 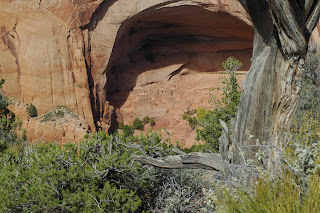