Left Dixmont on Friday December 28 without a glitch.  In the past, almost every year, some sort of complication has delayed our exit by either hours or days.  Lets hope this is the new model!.

Our first stop was an overnight with John Miles, in Concord that included dinner with Katy, Doug, Zach, Maddie, and Dillon.  What a fun night with a fun family.  We need to do that more often.  The next day we visited with John's daughter Bec, husband Peter, and new baby Sean, who choose a memorable date to be born - 12/12/12. 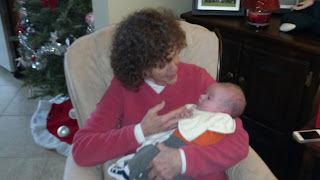 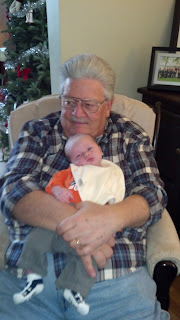 After spending some time getting to know Sean, we spent New Year's weekend visiting my sister Jane, brother Joe, sister-kn-law Josie, niece Anna and nephew Ralph, niece Paula and Tim.  We worked on preparations for our family reunion planned for next May.  New Year's day we began the journey south.

First stop was at Assateague Island where the wild ponies roam in the surf and  through the marshes on this 37 mile long barrier island.  Assateague is actually divided between Maryland and Virginia and then subdivided between several different agencies in each state.  It gets a bit confusing, so I might mess it up.

The Maryland portion of the island is divided into the Assateague  National Seashore run by the National Park Service and Assateague State Park, which is Maryland's only oceanfront State park.  The National Park Service oversees the health and well being of the ponies living on the Maryland end of the island.  They limit the size of the herd through a form of birth control.  The mares are injected once a year using a rifle dart containing a medication that prevents them from coming into heat.  The females produce only one foal when they are mature.  Other than this intervention, the horses are left as free wildlife to manage on their own.  The State Park and the National Seashore both have interesting and interactive visitor centers which are well worth the time to explore.

The Virginia end of the island is divided between the town of Chincoteague, the Chincoteague National Wildlife Refuge, run by the  U.S. Fish and Wildlife Service, and the National Park Service.  To add a bit more confusion, the horses on this end of the island are owned and managed by the Chincoteague Volunteer Fire Department.  This is the group that rounds up the entire herd during the month of July, swims them across the Assateague channel into the town of Chincoteague.  Here they check the health of the horses and also sell many of the young ponies to the public as part of their fundraising efforts.  This is a very popular event that brings thousands out to watch.  Recommended destination! 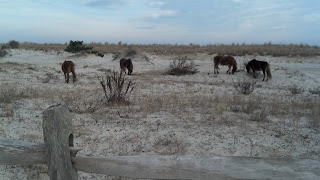 These ponies were wandering across the visitors center parking lot and onto the grass beside the lot. 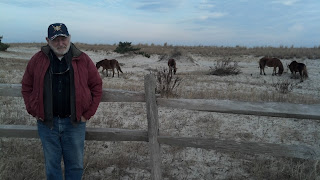 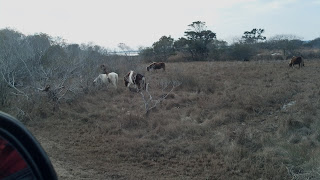 Driving through the campgrounds we spotted another group in the marsh area. 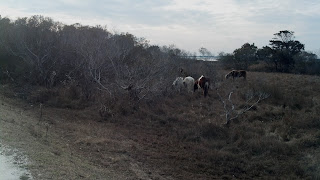 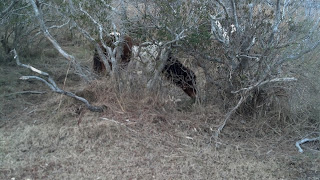 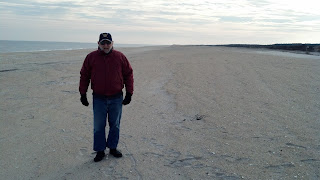 It was only 40 degrees when we were here but the wind was sharp and cold.  The best part - the beaches weren't too crowded!
Posted by cooktravelogue2007-8.blogspot.com at 10:19 AM No comments: