We pulled out of Divide, MT on the morning of Sunday May 3, heading east toward Maine. The second day out we stayed overnight in Wall, South Dakota, home of the famous Wall Drug. 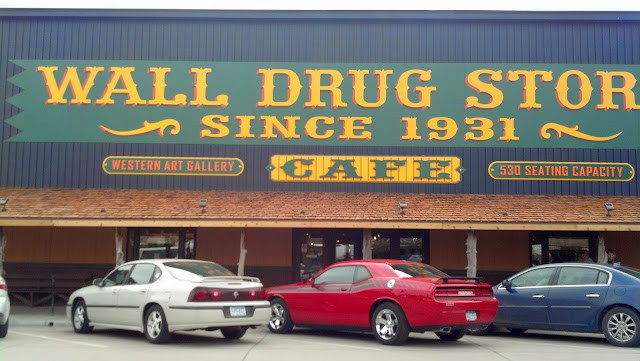 Wall Drug has been well known since the 1930's when the Don and Marjory Hustead operated a drug store in the South Dakota prairie town of Wall.  The story told in the cafe brochure tells about a struggling enterprise, until Marjory came up with the idea to put signs out on the highway advertising free ice water.  You have to remember that cars did not have air conditioning in those days.  With the addition of her signs, more and more people began stopping in for the free ice water and also purchasing other merchandise offered in the store.  The signs along the road continue to bring in travelers today.  In fact there are now several block-size parking lots to handle trailers and big RV's.
We decided to have breakfast in their cafe, where the coffee is still $.05 cents, really, five cents for coffee with refills!   There is currently an extended collection of buildings and an even more extensive collection of merchandise available in today's block long Wall Drug. 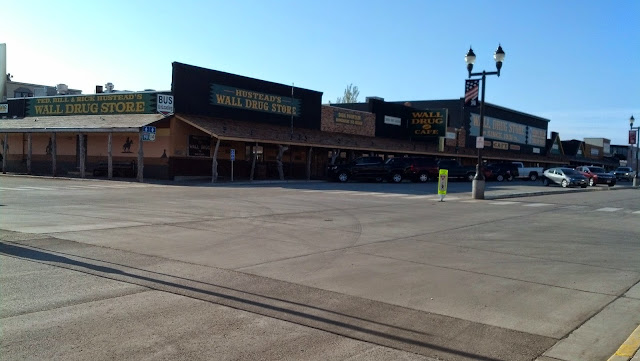 I am guessing that the Hustead's put the entire town of Wall on the map.  The picture of a plaque, commemorating their contribution to the city of Wall, and the surrounding area, hangs in the center of the business district. 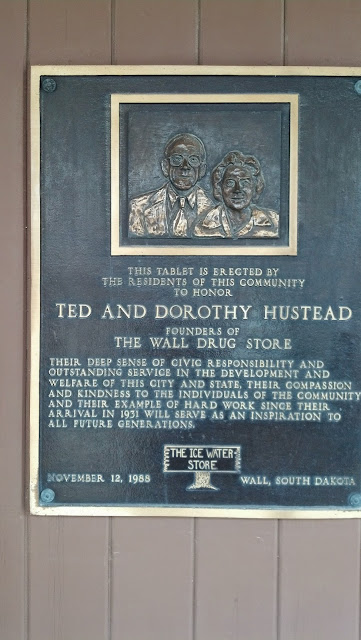 The section of the dining room, where we had breakfast, contained hundreds of western art paintings and sculptures,  many from famous artists. 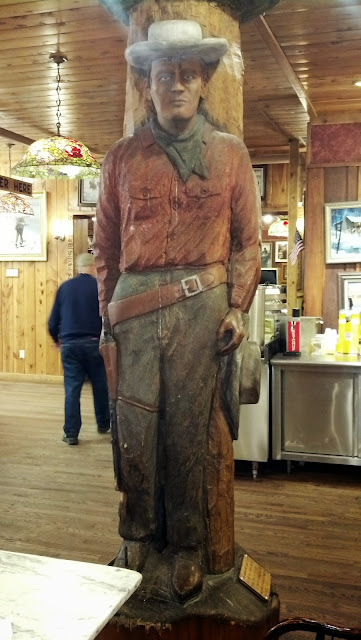 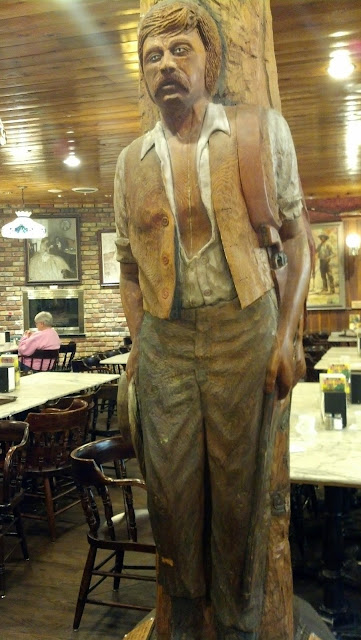 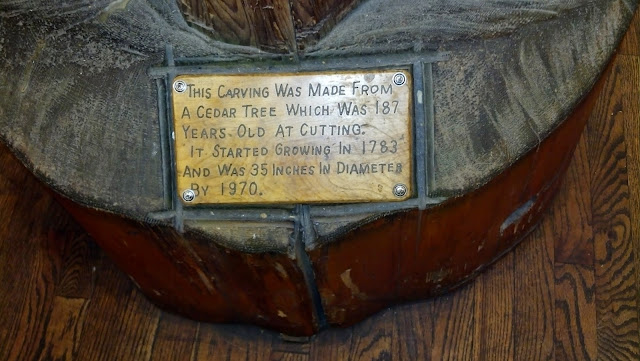 This carved post was in the center of the seating area.  There were only a few people in the restaurant, the morning we were there, but it was obvious they were set up for large crowds.  The building is maze like, and it is easy to wander around and loose track of where you are.  Found this counter where a woman was making fresh donuts the old fashioned way. 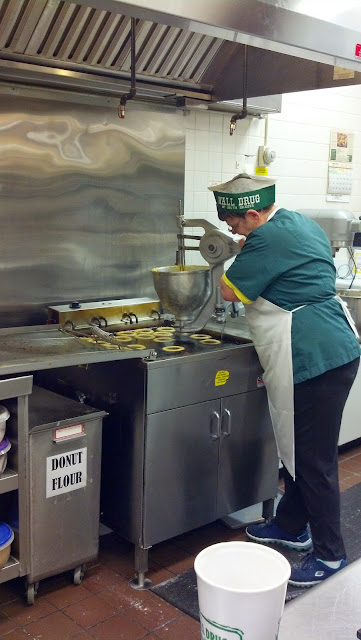 Lots of sculptures, with the cowboy theme, placed here and there. 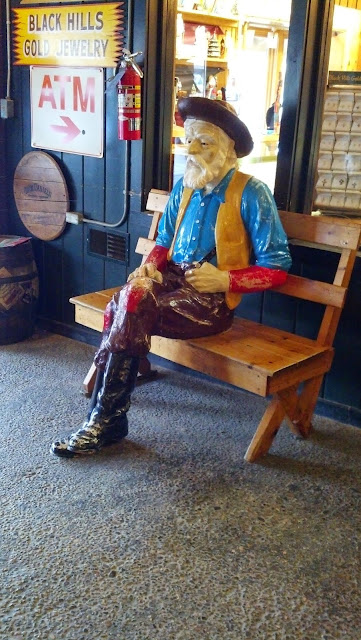 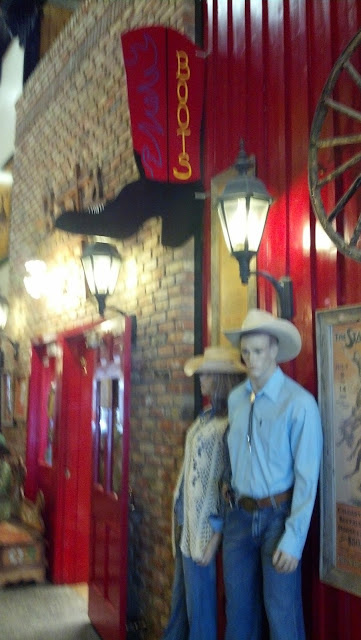 There was even a replica of the original Hustead Drug Store inside the "Wall Drug Store". A fun and interesting spot to stop if you are ever on the route through Wall, South Dakota.
Posted by cooktravelogue2007-8.blogspot.com at 9:42 PM No comments:

From April 26 through May 3 we were camped at a Bureau of Land Management campsite at Divide Bridge, on the Big Hole River.  Divide is 28 miles west of Butte, Montana.  The area all along the Big Hole and the Wise River has abundant river access points and most have great campsites for as little as $8. per night. 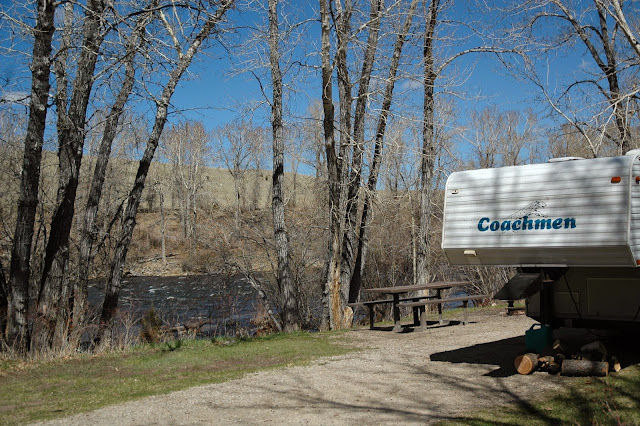 We pulled into Divide Bridge campground on a Saturday and it was about 2/3 full with weekend campers.  For some reason no one had taken this great site right on the river.  It was even a pull-through.  All the BLM campgrounds are inexpensive, however  it is strictly boondocking (no electric, water, or sewer connections)  No problem, we had the river water to flush, and 8 gallons of drinking water with us. 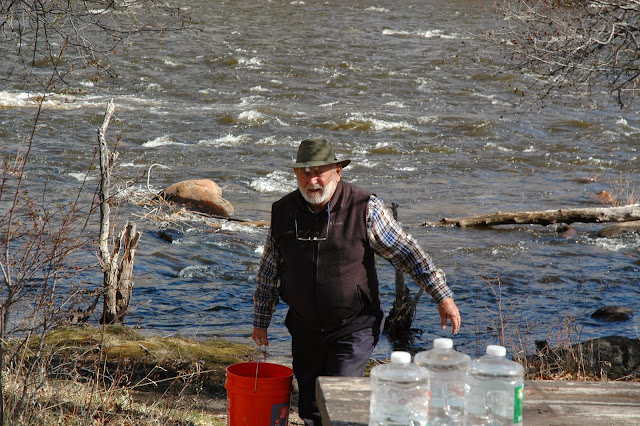 Marlin doing morning chores before heading out to fish.  Before he left, we had some visitors who perched on a rock near the shore long enough to get some good shots of these Common Mergansers.  There were many of these ducks in the area but this was the first time they were close enough, and for a long enough time, to get a good identification. 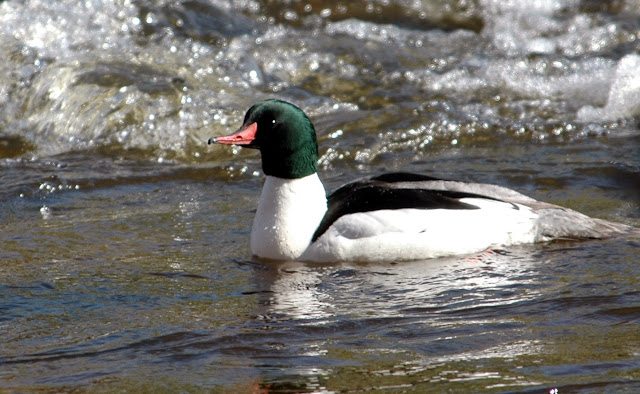 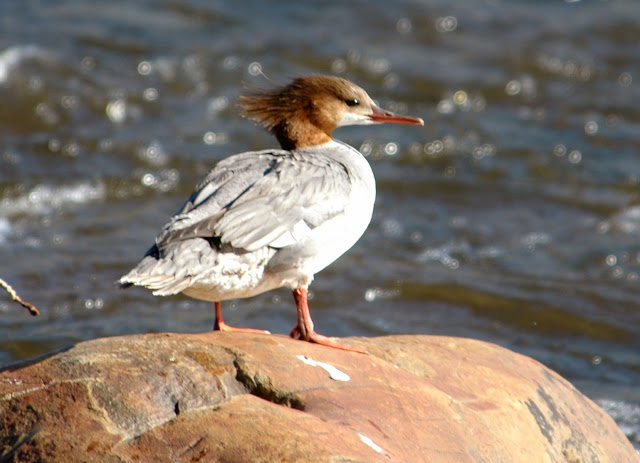 Adjacent to the campground were several short hikes that I took advantage of while Marlin fished to his hearts content.  Most of the pictures that I took were on the second time I hiked the mile and a half observation trail to the top of the rocky hill behind where we were camped.  The first trip up there, the one where I saw some great birds at close range, was the trip with no camera. 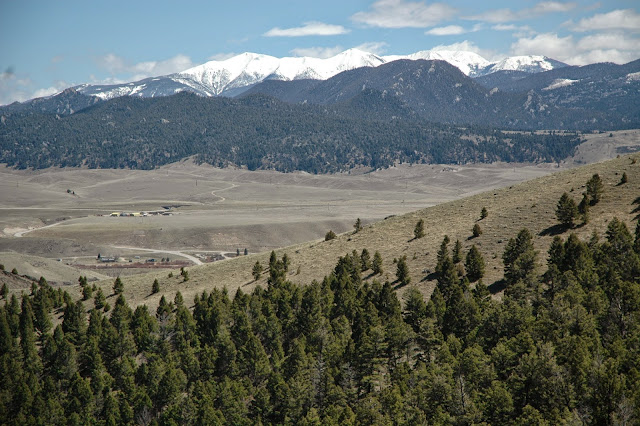 The trail meandered through a bird filled, conifer forest before climbing up and onto a grass and rock covered hill.  Quite a view. 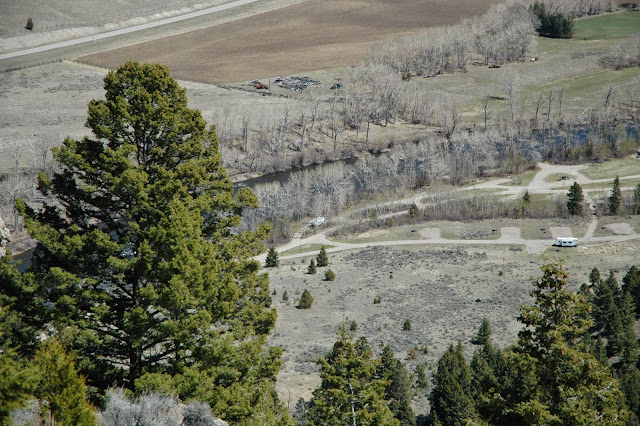 The campground was all ours by Monday Morning.  We are the tiny white spec, in the trees, closest to the river.  The other trailer left on Tuesday, so we had the entire place to ourselves.

While I was having lunch and enjoying the beautiful day on top of this hill, a pair of Mountain Bluebirds came and stayed in a tree quite close to where I sat.  It would have been an easy shot, if only I had the camera with me!!!!  Two more unusual birds perched near where I walked across the crest of the hill, a Clark's Nutcracker, and a Townsend's Solitaire.

On the way down, a red tailed hawk circled above an screeched at me.  When the trail curved under a rock out cropping, a second red tail flew out and joined its mate.  Took this with my phone, just to try and capture the moment. 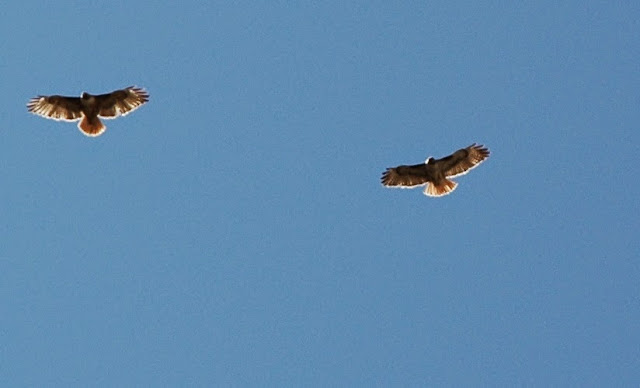 All along the grassy trail wild flowers were blooming.  With the sun so bright, the colors are washed out but these were brilliant blue 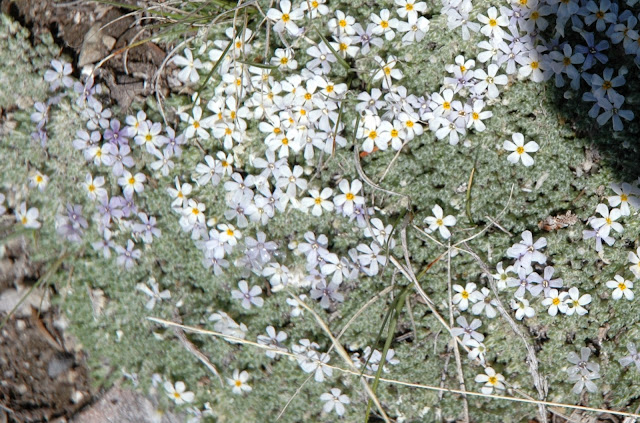 The next several days, when I hiked, I carried the camera in my pack.  Naturally, I did not see any more birds at a distance that I could photograph them.  I did spot another pair of Mountain blue birds, but they were too far away to shoot.

One day I traveled with Marlin when he went to fish in the Wise River.  This moose was the only other living thing we saw that day.  He was not thrilled that we interrupted him eating the new pussy willow buds in the middle of the campground. 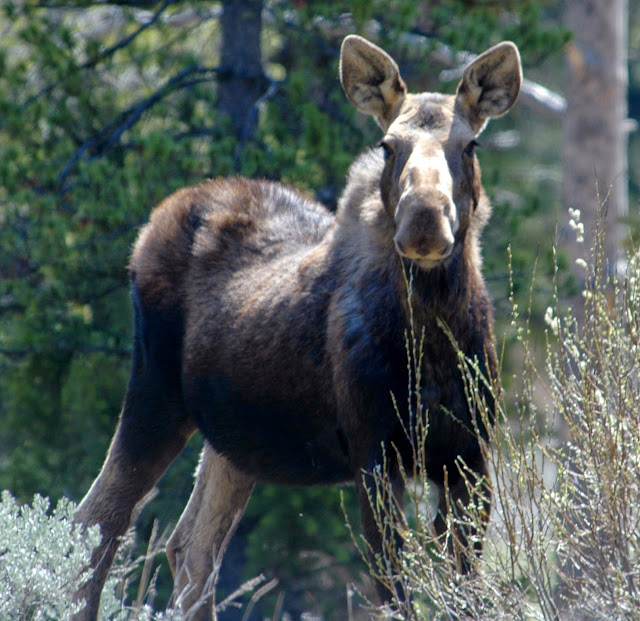 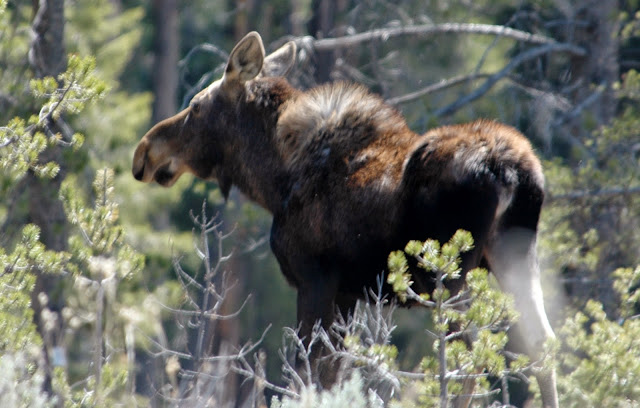 Fishing on the Big Hole.  Although a great deal of the ranch land in Montana is fenced, there are many fishing access sites along most of the roads that border the rivers.  Some are just pull outs at the side of the road and others are complete campsite areas.  Marlin tried out quite a few in both categories.  They are all well marked with this classic sign. 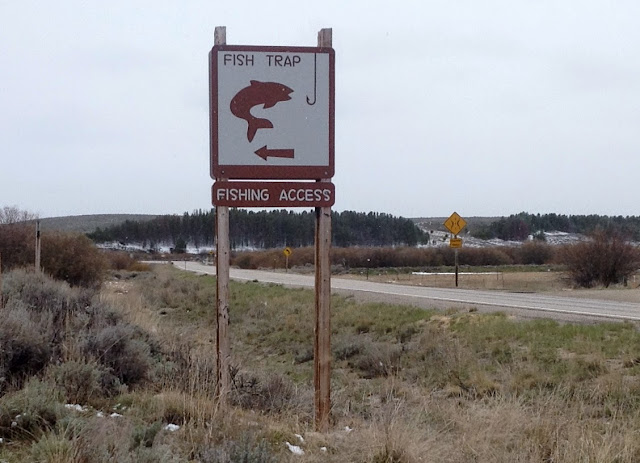 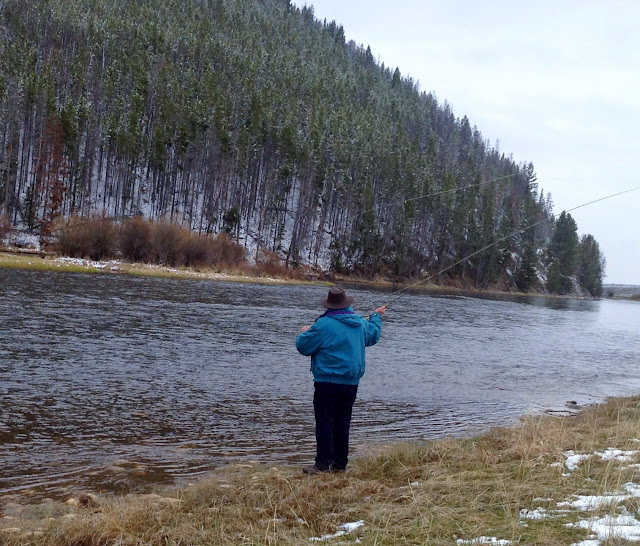 This day it was very windy.

Unfortunately, after eight days of fishing it was time to move on, and naturally, that was  just when the bugs started to hatch, and the fish started to bite! We could have stayed a few more days, but our tanks needed emptying and our electric systems were beginning to be a problem.
Posted by cooktravelogue2007-8.blogspot.com at 11:50 PM No comments: