Dropping down out of Carson National Forest we drove into Taos, New Mexico. It was still early in the day so when the visitors center mentioned a special celebration and artists show out at the Taos Pueblo, we went to take a look. The Taos Pueblo has been, and still is, inhabited by Native Americans for over 1000 years. Pueblo is a Spanish word meaning village or village dweller. Residents there maintain historic and religious traditions, yet at the same time they participate in main-stream culture, particularly the arts.

The events today were the culmination of their religious celebration for St Geronimo, the patron saint of the Taos Pueblo. On this special day the community asked that no cameras, cell phones, or animals be brought into the Pueblo.


Hundreds of artists were set up in the plaza showing hand made jewelry, pottery, rugs, weaving, and baked goods, to name a few. We wandered through many of the booths and talked with some of the artisans about their work. The maker of intricately designed pottery told me that the paint on her pots was made from spinach, boiled to a thick paste, dried on corn husks, then mixed with water and used to paint the historically authentic geometric designs. When asked if the perfectly spaced configurations were sketched in at first, she said, no, she just used her hand to judge where each line should be placed.


Part of today’s celebration was to include an appearance of the sacred clowns and a traditional pole climb, where several men attempt to climb an 80 foot smooth pole to retrieve gifts that had been tied to the top before dawn. At about 1:00 the clowns, painted from head to foot with black and white horizontal stripes, appeared on the highest pueblo roof top. They danced and hollered for awhile, then made their way down three more roof levels to the ground. We assumed this would be the start of the pole climb, but the clowns then began making their way through the rows of artists tents, playing pranks on anyone of their choosing. We waited and watched for the next hour but when we realized the pole climb would not begin until the clowns had roamed through all the tents, we reluctantly had to move on since we had 50 miles to go before meeting up with Chuck and Julie.


The Burwells were camped in a town called Las Vegas, NM. Residents claim they were the first Las Vegas, however, it bears no resemblance to the Nevada one. This is a small berg on the high desert about 50 miles south east of Santa Fe. It was pretty exciting to drive into the campground and see Julie waving at us from the back of her camper. Even though we have met some very interesting people over the last two months, there is nothing like seeing someone from home after all this time away. We had a great reunion, lots of talking and trading stories.


Later in the evening, Heather, a woman who worked at the campsite, came by to visit. She had been born in Lewiston, ME, by Canadian parents, and even though she had lived in Oklahoma for 25 years, she was sure we were related somehow or knew some of her relatives in Bar Harbor. She called her mother and asked about her Maine relatives. None of the names were familiar to us but her enthusiasm was contagious and we had a few laughs with her anyway. Campers love to make connections, no mater how implausible.


We stayed in Las Vegas only one night, then moved to Santa Fe. It is hard to believe, but here it is October 1 already. It seems like such a short time ago that it was February and we were making reservations for this years balloon fiesta in Albuquerque.


The first day together we took Chuck and Julie to the Georgia O’Keefe art museum, browsed the shops in Old Santa Fe, and had lunch in an outdoor café. 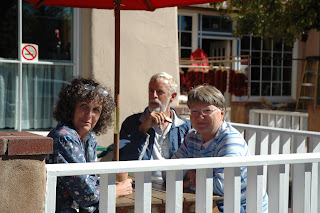 Both Santa Fe and Albuquerque have managed to preserve their oldest areas and town squares, which now these spaces are a center for tourist shops, art galleries, and high end stores carrying quality pieces of work. Window shopping there is like spending the day at a museum.


On Wednesday we headed for Bandelier National Monument where some ancient pueblo ruins are located. This pueblo was estimated to have around 700 inhabitants while it was occupied sometime around 1200 AD.

There were two separate dwelling areas. One was a large circular configuration on the flat ground near the stream. 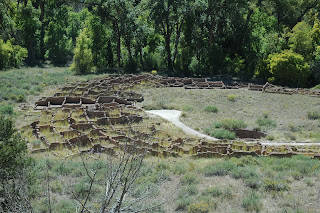 The second section was built high into the cliffs that were made of tuff, a rock created from volcanic ash. 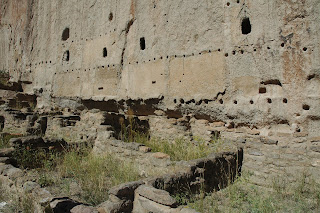 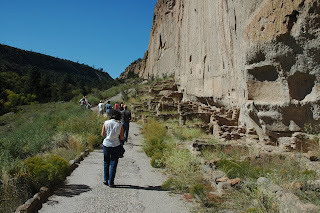 About a million years ago there were two violent volcanic eruptions which left over 1000 feet of ash that eventually turned into stone. The rock is soft enough to scrape with primitive tools, so there are many caves hollowed into the cliff face, in front of which the people built two or three stories of adobe brick and log houses. We speculated that this housing arrangement was not much different than today, where the rich people live high up and the poor folks live down on the fields where the work is!

That afternoon, Bob and Glen Baldwin flew in from Maryland and arrived at our campsite. More familiar faces with past experiences that we share. Julie had set out a rug, table and chairs between their trailer and the next camper so it was just like home with our own patio. We ate out there and visited until late in the evening, catching up with their doings and news about the Baldwin boys and grandchildren. 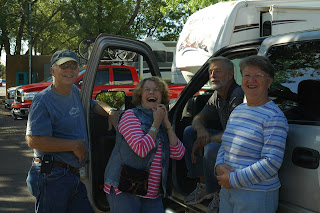