The next stop we made took us for a quick run through Zion National Park. Marlin had just spent several days here back in March, but I had not been here before. With only a few hours available, all we were able to squeeze in was a drive through on the entrance road from east to west, which includes an amazing tunnel. We did stop to take the shuttle through the main canyon in the park. This place needs at least a week to explore all the exciting sounding trails that take off from each shuttle stop. Another "must come back to" spot. 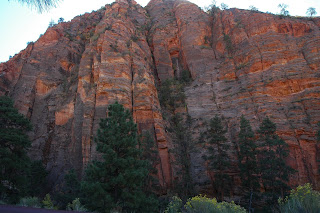 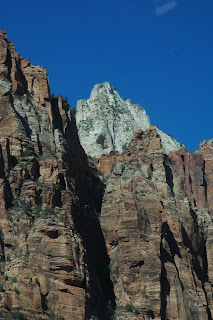 By Friday night we arrived in Page Arizona where the Glen Canyon Dam is located. We toured the dam site, viewing the movies about the damn construction that started in 1957 and continued for the next 9 years. OSHA would have a field day with the construction methods used in those days. There were men swinging on ropes over the sides of the cliffs, breaking away loose rocks with 2 foot long pry bars. No safety nets, no had hats, no back up ropes. They looked like they were enjoying the work, sort of like the rock climbers we see these days playing at what these guys did for pay.


We spent the next day in the Page campground, sorting out things in the camper to send home, going to the post office and library, and deciding what to pack for Hawaii.

Sunday we drove to Nevada and camped at the Valley of Fire State Park. This is a small State Park about 40 miles north of Las Vegas that encompasses a section of red hills that have evolved into strange shapes and caves, some of which resemble people or animals. One cliff behind our camper looked like a wall of faces, all with their mouths open as thought they were yelling or begging for food. Around the corner was a perfect poodle head and an elephant with a long trunk. 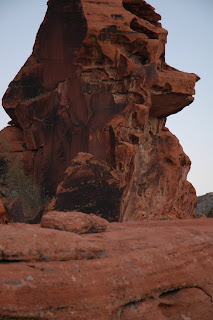 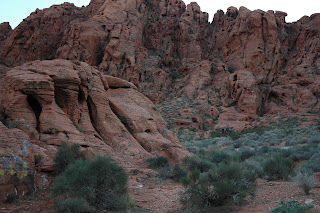 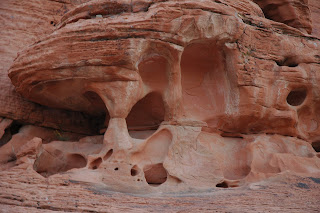 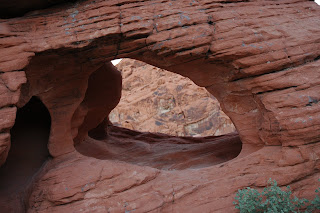 Monday afternoon we landed in the Disneyland like space called Las Vegas. Not surprisingly, Las Vegas has changed considerably since we were there 40 years ago. At that time, there was a mile or more of desert between downtown and the strip. That barren section, along with many additional miles, have become a solid stretch of casinos, shops, and restaurants. Just walking along the strip and sampling small sections of these establishments provides plenty of entertainment for free, without even taking time to attend the dozens of high profile shows that are offered.


Linda and John Miles arrived on Wednesday and we did more sight seeing along with a few stops at the slots. Linda is the one with the lucky streak in our group, so mostly we watched her play and win, then called it an early night since we were set to be at the airport at 4:30 am for our flight to Hawaii
Posted by cooktravelogue2007-8.blogspot.com at 8:04 PM