Canyonlands National Park is not as touted as Arches National Park, but we both decided it had much more to offer. Part of the issue may be that Canyonlands must be seen at three different locations which are many miles apart. One section, called “Island in the Sky”, overlooks the Colorado River on the East and the Green River on the west, from a height of 2000 feet. Even this Mesa is divided into three parts.

Another piece is 20 miles south of Moab, then 48 miles on an access road called “The Needles” which is at a lower elevation, where you look up at tall narrow fingers of rock formations. The last area is in the western section, called “The Maze“. The Maze can only be approached via 50 miles of 4 wheel drive only roads. This most remote portion of the park is full of unmarked twisting trails through endless rock canyons and spires. No support or services offered here, this is for the extreme adventure lovers in the population. From the looks of Moab, this town is an where the young and active congregate before jumping off into an excursion on bikes, jeeps, 4 wheelers, kayaks, or river rafts.

We drove to the Island in the Sky and nailed down a campsite at Dead Horse campground. The Dead Horse finger is actually a State Park, on the east side of the bird foot shaped Mesa. Dead Horse got its name from a legend about cowboys driving wild horses out onto the very end of this toe, closing the entrance with brush, and culling the best of the stock out for sale. One time, the story goes, the culls were left out there by mistake and perished from lack of water. Picture the narrow entrance to one of these “toes” shut tight and all around the edge is a 2000 foot rock strewn drop to the river below.

The pictures do not even come close to capturing the color, depth or beauty of these canyons. It did not help that we were touring in the middle of the day when the sun is too bright for any kind of decent photography. That did not stop us from taking photos, even though we knew they would be sub par. In the afternoon, realizing the poor and repetitious quality in the pictures, we left the camera in the car to go for a short hike. Naturally, this offered us some unique rock formations on a picturesque trail in the fading light of late afternoon!

Mesa arch appeared after a short walk on a trail through some neat Juniper and Pinyon Pine trees. Looking through Mesa arch, you are able to see “The Washer Woman” arch. In one stop you can see Canyonland’s only two arches. Can you pick out the “washer woman” in the picture? She is pretty big and the arch is the space between her arms and her washboard.

The next day we took the three mile Murphy’s Point hike that ventured out across some flat desert land that was once a ranch. An old rutted road, a wooden coral and a rotting shed are all that remain of the ranch. This left us wondering what ever happened to Murphy when Canyonlands became a park in 1964. The view from the point overlooked the Green River at the bottom of layers of sheer red cliffs and spires. Just to the south of Island in the Sky, the Colorado and the Green rivers converge. This is a great spot for roiling rapids that rafters love, but it is not visible from the Mesa.

One of the fascinating features you see below, from any vantage point, is the White Rim Road. Half way to the river, probably 1000 or more feet down from the Mesa, is a geological layer of white sandstone that is harder than the rock above or below it. Because this white sandstone erodes much slower, it has created a wide plateau. On this level there is a road, if you can call it that, that circles the entire Island in the Sky mesa. The road can be seen from most all viewpoints on the high ground. The river is still 1000 feet below that plateau, so adventurers traveling this road stop at overlooks to gaze down on more crumbling rock canyons between them and the river. Vehicles, 4 wheel drives of course, crawl along like ants, at about 10 miles per hour. The road is 100 miles long and it takes two to three days to complete the trip.

We watched a group of bicycle riders through our binoculars as they paused for lunch near their support truck. That seemed like a fun trip, since the truck was hauling all the heavy stuff. However, watching the riders leave their lunch stop and bounce over the rocky rutted road I began to think a double pair of padded bicycle shorts would be necessary by the end of the day.

More time was called for to enjoy this park but we were meeting the Burwells down in New Mexico, so we took off and headed that way. Saturday night we spent in Carson National Forrest at 9,954 feet after driving through snow and a very strong head wind. This is a beautiful forrest that reminded us of home. 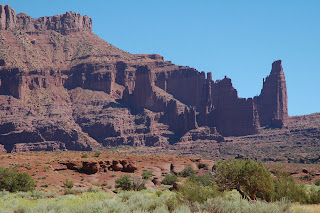 Fisher tower. You may have seen this on TV with a car on top 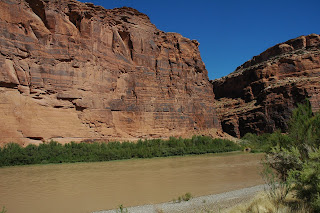 The Colorado looks like a flowing river of melted milk chocolate. 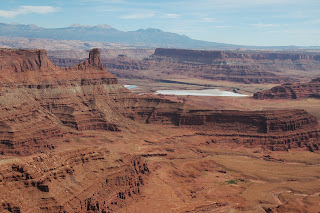 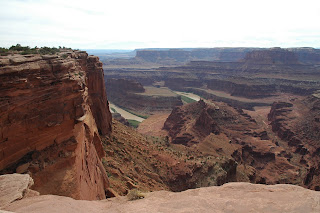 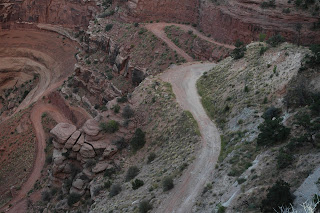 Shafer Trail leading down into the canyon and connecting to the White Rim road. 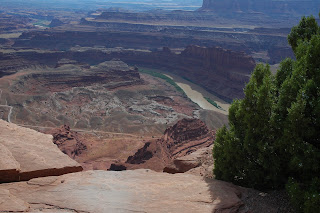 The Colorado River below. 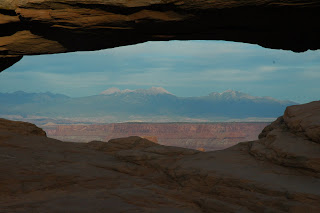 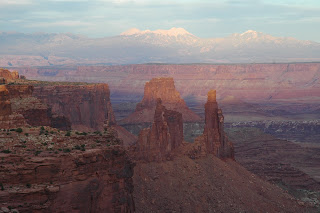 Can you see the Washer Woman Arch? 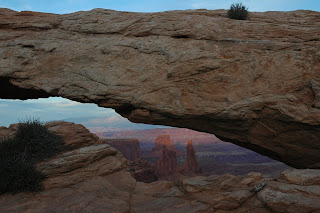 Mesa Arch with Washer Woman Arch in the background 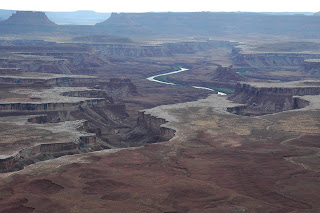 The White Rim plateau. The road can be seen on the right side of the picture