Friday, the adventure really got going. In the morning we picked up a 23 foot class C camper to use over the weekend. Our little truck job has no shower or toilet and although the Fiesta campground has water and electricity, there are no bathrooms at all. The few porta-pottys we did see were about half a mile away, so we decided to live it up for three days. 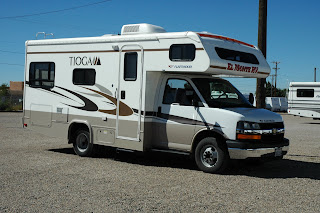 We took our place at the Balloon Fiesta campground located across the main road from Fiesta Park, around 11:00. I could not believe how many large motor homes were here. The number 1700 was heard somewhere, but it sure seemed like 17,000 to me. We again had a great set up, side by side, with the “patio” between our campers.

Chuck, Bob, and Marlin had signed up for a tour of the Trinity site on Saturday. This is the place where the first atomic bomb was constructed and exploded. They had a talk on Friday night and an all day bus trip on Saturday. At the Friday night lecture, one of the original photographers presented pictures that were taken during 1944 and 1945 when initial preparations were taking place and during the actual bomb blast. 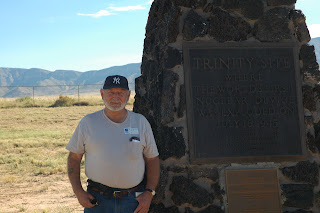 This trip was coordinated through the Atomic Museum in Albuquerque and several people who had actually worked on this bomb project were docents on the tour bus. Marlin was amazed that this original atomic bomb was constructed in an old farm house and the parts were transported there in a 1942 Plymouth sedan. This Trinity site is only opened to the public twice a year.


Julie, Glen and I got up at 5 AM with them and went to the park for the Dawn Patrol and the first Mass Ascension of the Fiesta. At this point, I must warn you that my excitement level was at an all time high, so lots of pictures of balloons will follow. This was one of the most thrilling events I have been to in a long time.

At the “Dawn Patrol” nine to twelve balloons inflate, ignite, and take off just before dawn. Their job is to check out the wind patterns but what a rush to watch them for the first time, initiating the process in the dark. Words simply cannot convey the thrill this entire event generates. First of all, there are hundreds, and eventually thousands, of people right there on the grass among the balloons. The entire crowd seemed to be very considerate of the silk pouches laid out on the grass, the support staff tugging on long ropes, and those working at holding down the gondolas after the balloons were inflated. It was great to be in such a calm group of spectators when the excitement level was so high.

The Mass Ascension began with the Green and Turquoise Albuquerque City balloon going up first, trailing a large American flag from the bottom of its basket, while the National Anthem played. Then, wave after wave of balloons took off, all choreographed by the “zebras” who are similar to referees right down to their striped clothing and ear splitting whistle blowing to move the crowds out of the way.

There were a total of 350 balloons on the first day’s Mass Ascension. I would have sworn it was 35,000 but I already mentioned my hyper state. At one point, the three of us were in the middle of a dozen balloons either taking off, inflating with a fan, or firing the propane jets to start their lift off. Over to our left was an entirely black shape just beginning to fill with air. We watched it grow bigger and bigger, but could not determine what it would be. At last it began to tip upright and with a shout someone said “It’s Darth Vader”. It was huge and all black, with the gas jets going off, it sounded just like his breathing. To top this off, the balloon was accompanied by several ground crew, dressed as storm troopers, attempting to keep the spectators at bay.

The official report said there were 98 special shape balloons for this years fiesta. You will see a few in the pictures. My favorites were, of course, Darth Vader and also Lilly Bee and Joey Little Bee who inflated and flew together. Some of the other fun shapes were Nellie B the pink elephant, Gus T Guppie a fish, Ham-let a pink pig, Enchanted Duckie who looked like Tweedy Bird, Smokey The Bear, a huge pink and black haunted house and a lot more creative characters.

The thrills continued for almost two hours. Just when you thought they were finished, another wave would begin to inflate and rise up behind you. About 9:00 you could feel the wind begin to pick up and shortly thereafter some of the flyers, that had begun to blow up there balloons, let them fall back to the ground to wait for calmer skies.

The weather went down hill for the rest of the day and the Twilight Twinkle Glow was cancelled for Saturday night. We went back to the field around 7pm for a fantastic fire works show and hoped the wind would blow itself out overnight so that Sunday’s planned events would still take place.

Sunday did dawn calm and clear, so off all six of us went again a 5:30 am to see the Dawn Patrol and Mass Ascension. There was no less excitement the second time around, but the wind was stronger today, so after take off, the balloons flew very low and dispersed at a much quicker rate than the day before. This made it seem like there were fewer take offs, but in reality, their were just as many as on Saturday and just as much oohing and aahing.

Sunday night was a go for the Balloon Glow. This is where the balloons stay tethered to the ground, but blow up and light the gas jets after dark. They are squeezed together touching side by side in about 15 or 20 rows, each row having at least 12 to 15 balloons, firing their propane burners off and on at random times. Then, when you least expect it, they all fire simultaneously, lighting up the whole field. The colors you see in the day are wonderful but this night show, with all the balloons so closely packed together, made me jump up and down with excitement. The glow lasts for about an hour and a half and shortly after it ends, the fireworks show begins. This was another outstanding spectacle in the sky, which we topped of with brownies and ice cream at the Burwell trailer. Julie is always prepared with scrumptious deserts.

The balloon fiesta continues for another seven days, however, our stay was complete on Monday morning. We expected to simply pack up and depart but when I woke up about 6 o’clock, it was just getting light and I saw a balloon passing over the campground. The dawn patrol was on the job checking the winds and weather. By the time I knocked next door so they could see the balloons, more were in the skies. Today was a “Balloon Fiesta Hold Um” Race, where the pilots receive some playing cards and have to drop two markers onto giant cards that are placed on the ground, choosing the right cards to make their best hands. This is pretty tricky when the temperatures are low and the wind is blowing.

As we watched, we saw some of the flying balloons head for an empty field within our sight, drop down low and toss out a marker. One or two of them actually touched down, we could tell by the swaying gondola as they gained height. It was a new treat to have this different view as the waves of balloons came toward us and then passed over our heads. I even climbed up on Chuck’s trailer roof for an unobstructed view and more pictures.

After this unexpected bit of excitement, we had to say good by to the Baldwins who were meeting old college friends at a near by motel. It had been a very fast five days filled with some fun memories. We left at the same time and drove across the city to turn in our temporary home and reconnect with our pop up before heading north to Mesa Verde National Park and a new adventure.

Later in the day we heard that one of the balloons had experienced a tragic accident where one woman lost her life. When we read the details we assumed we had seen this balloon as it passed over us earlier in the morning. 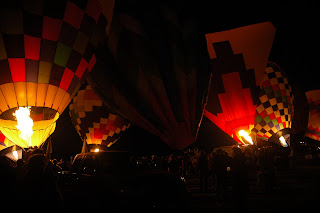 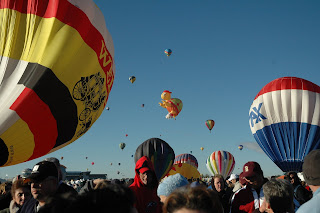 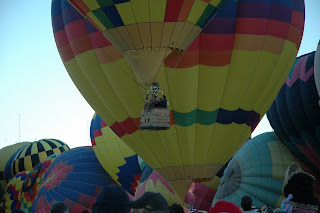 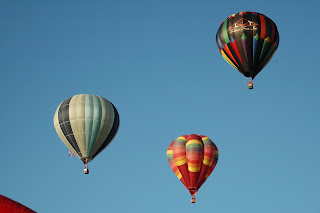 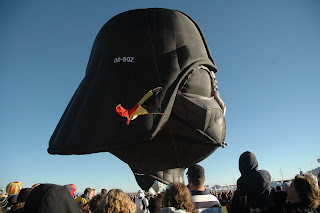 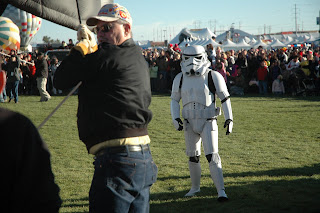 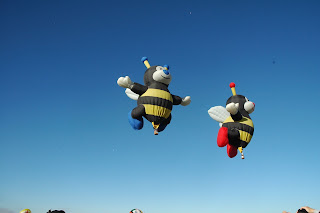 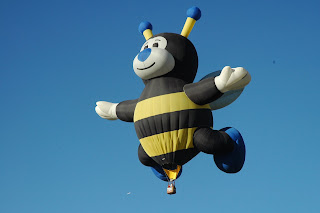 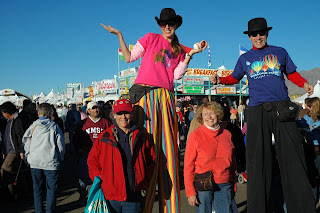 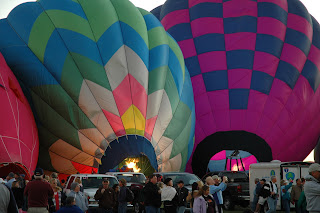 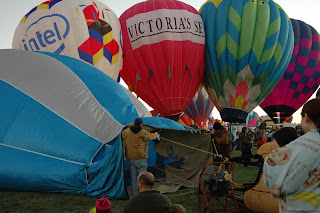 Filling a balloon with cold air at the beginning of inflation. 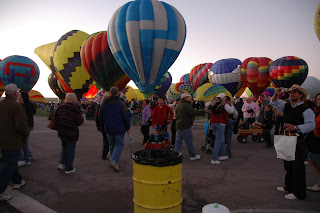 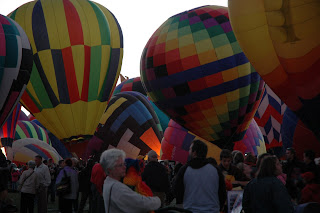 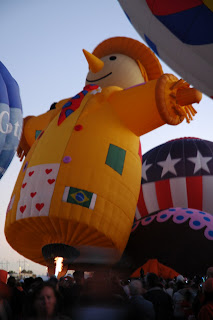 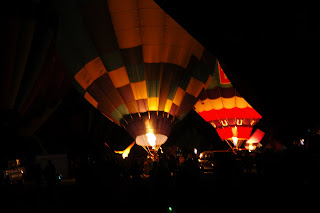 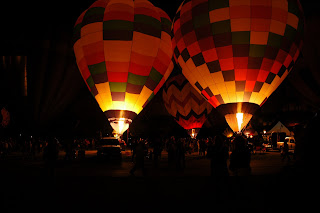 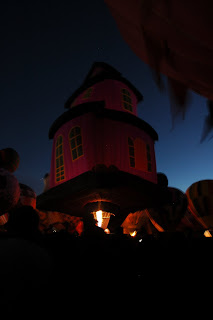 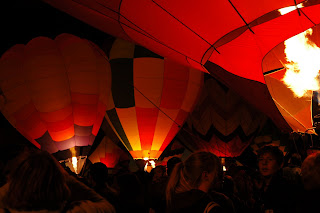 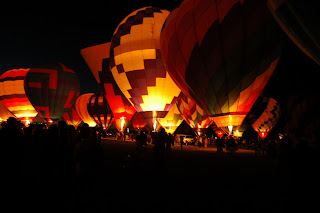 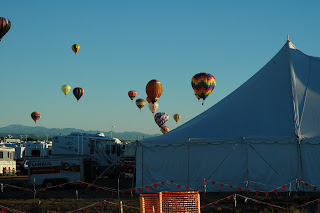 Monday Morning from our camper 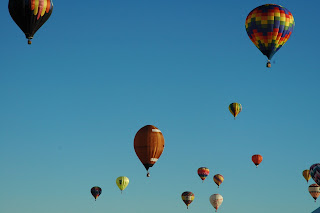