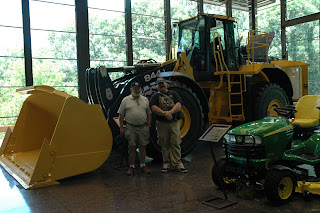 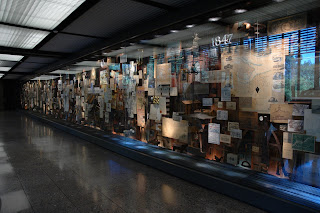 This is a collage of John Deere company and period artifacts that runs the entire length of the building.
Posted by cooktravelogue2007-8.blogspot.com at 11:50 PM No comments: 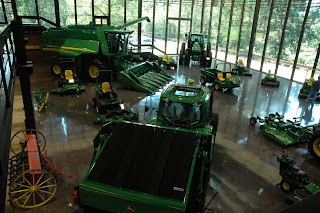 John Deere from above 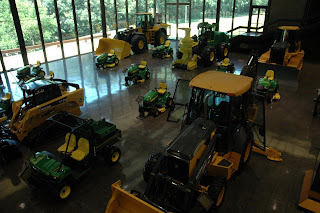 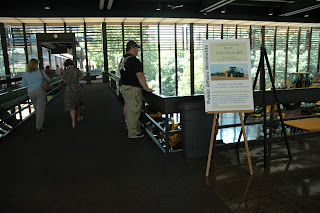 The weekend was a whirlwind of talking, visiting and eating. Saturday's reunion had a small but animated group of cousins, aunts, grandchildren, great grandchildren and great grandmothers.

Marjorie McNally, who's mother was a Sackett, is 92 and made two baked dishes herself for the pot luck. The reunion boasts its strongest attendance from Marjory's children, grandchildren, and great grandchildren. Marjorie is the oldest member of the Sackett line, which is how we are connected. Marlin's mother was a Sackett. Her father, William Paul Sackett, was a brother to Marjorie McNally's mother, Bertha. Marlin can trace the Sacketts back to 1690, when two brothers came from England .

Sunday was another cookout with uncles and cousins, and more food , of course. The weather here has been incredibly great, with low humidity and decent temperatures. Usually it is about 90% humidity at 95 degrees and no cool down at night. Lets hope the cooler, dryer days continue.

Today we went to the John Deere world headquarters building. The entrance building has a lower level where many of their large pieces of equipment are displayed. Our kids always begged for a trip there because visitors are allowed to climb on all the machines. Mike is still a kid at heart and so am I for that matter. I had to take some pictures to share a bit of the fun.

The building itself is magnificent. It is nicknamed the rusty palace because it was constructed of a metal that is a rusty brown color. The design of the whole complex is dominated by the contours of the land, which is predominately rolling hills. The building reflects this topography, with the employee cafeteria on a lower level overlooking a pond full of fountains.

On the way to the airport, we made a last trip to the Maid-Rite. Mike is now winging his way home after a full weekend of family and food. We plan to take off tomorrow morning and head north through Iowa, toward South Dakota.
Posted by cooktravelogue2007-8.blogspot.com at 10:27 PM No comments:

We arrived in Moline, IL around 11:30 on Wednesday after a grueling 14 hour driving day on Tuesday. Several towns near Elkhardt Indiana were overrun with folks headed for a local flea market. Apparently this is a large yearly event. One hotel said they were full with just vendors for the event. This caused us to drive further than we planned, but it allowed us to have a shorter trip on Wednesday.

We were in time to meet our nephew Mike's plane at noon and surprise him, then head directly for the nearest "Maid-Rite" restaurant.

"Maid-Rite" is a local hamburger made with crumbled, steamed beef that Marlin grew up eating. Now the whole Cook clan thinks they are a must when they are in western Illinois. Picture a sloppy Joe, minus the sauce, plus pickle, onion, and mustard, on a hamburger bun. At least half of the crumbled hamburger usually spills out onto the plate, to be eaten later with a spoon. The Cook boys tell me there is nothing like it. I order a salad.

The next few days will be full of visiting relatives and old friends, catching up with Mike, who we have not seen since 2000, and eating more Maid-Rites.
Posted by cooktravelogue2007-8.blogspot.com at 8:27 PM 2 comments:

On the Road At Last

We finally got away at noon today. The roof got finished, the camper got packed, the house got cleaned, the doors got locked and we piled into the old Chevy.

We have stopped for the night south west of Albany, N.Y. A charming old inn called our name as we passed by about 9 ,P.M. Actually, we figured it was our last chance of seeing a decent place to stay. It was a good choice. Charmingly redone with 40ish furnishings, hand pieced quilt, lace tablecloths, new bath fixtures , and wireless Internet. What more could we ask for.

We hope to cover lots of distance tomorrow.
Posted by cooktravelogue2007-8.blogspot.com at 9:21 PM 1 comment: 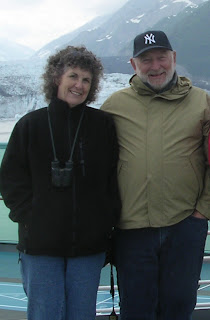 This is my first practice at putting photos on this blog. For the experiment I choose a snap shot from our visit to Alaska in 2003. We were on an inside passage cruise, viewing a glacier. And Marlin says he hates winter!
Posted by cooktravelogue2007-8.blogspot.com at 9:04 PM No comments:

Well, we were scheduled to take off today but... As usual, life gets in the way. Yesterday I realized that I had a sore "bump" inside my mouth that had not gone away, so I called and had the dentist check it out. Of course it was not good news - a dead abscessed tooth that needed a root canal. The specialist could take care of that at the end of next week. To make a long story short, he gave me some antibiotics and told me to call for the name of an dentist in Canada if needed. He has classmates in Alberta and New Mexico. Lets hope the drugs take me into November when we return for the holidays.

This unexpected delay killed our plan of finishing the roofing job that must be completed before we leave, and today's rain hasn't helped either. Retirement allows one to not panic when these things occur.

I won't send out our blog address until we really get on the road, but blog masters suggest that you write something short every day. I need to get in the habit.
Posted by cooktravelogue2007-8.blogspot.com at 6:01 PM No comments:

I was convinced by my friend Mary that blogging was the way to go for sharing our travel information instead of email. This way your mail box is not cluttered with information that you really don't care to read, but is available when you want to know where we are and what we have been up to. I also like being able to add pictures. I will use restraint in that department, we take way too many pictures.

At this point we are still trying to organize our living quarters and our lives before starting out for Moline and our family reunion. The current start date if Friday, July 20. Lets see how close we can come.