Just south of Amarillo, in the town of Canyon, is Palo Duro Canyon State Park.  Greeting signs proclaim, "Welcome to the Grand Canyon of Texas"! Since this 27,000 acre State Park is located within the second largest canyon n North America, I guess the title is appropriate. 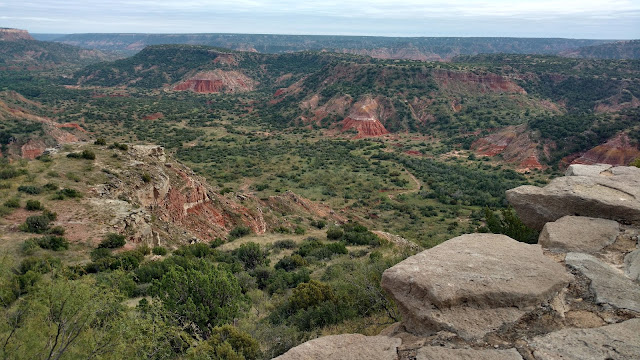 View from the visitors center

The land was deeded by private  owners in 1933, and the park was opened in 1934.  Seven companies of Civilian Conservation Corps (CCC) were sent to Palo Duro Canyon from 1933 until 1937 to develop road access and to construct buildings, shelters, bridges and trails.  Much of the work continued even after the official opening. 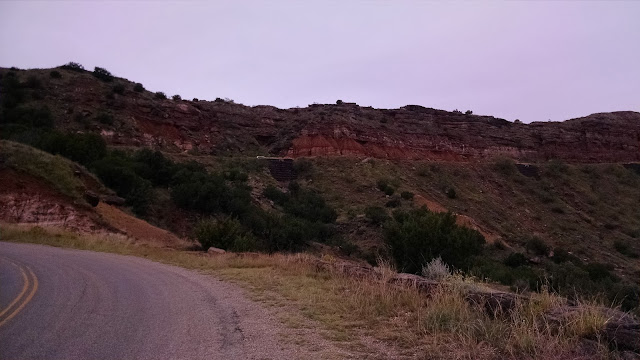 The road into the canyon, while pulling the camper, was a bit daunting.  In fact the entire three days here we worried about the trip out.  Could our aging pick up do the job of pulling up those long, long, steep grades?

The campsites were placed in scenic spots throughout the canyon.  That is the tail-end of our camper on the left. 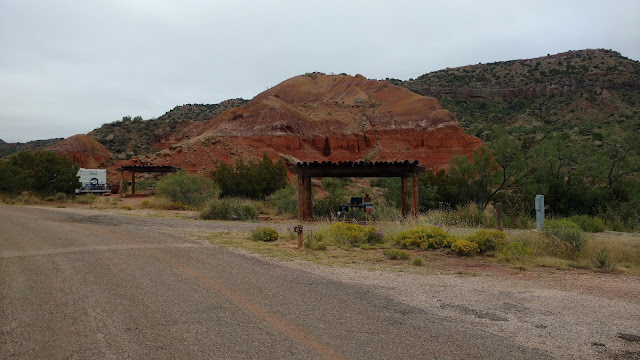 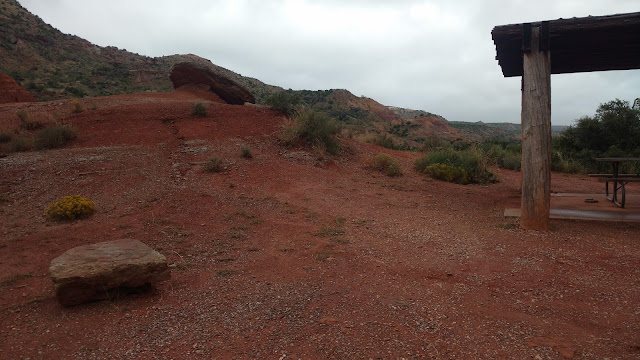 The location was beautiful, except it rained all three days we were there and the beautiful red clay washed down and around our camper, creating a muddy entry way, 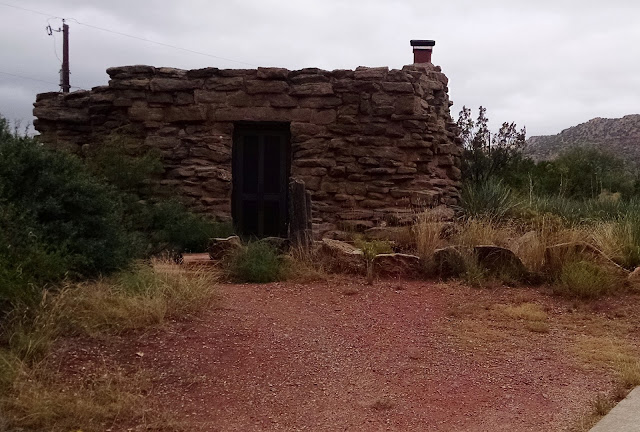 These are the cabins built by the CCC in the 1930's.  They are still used today, with the addition of air conditioning. 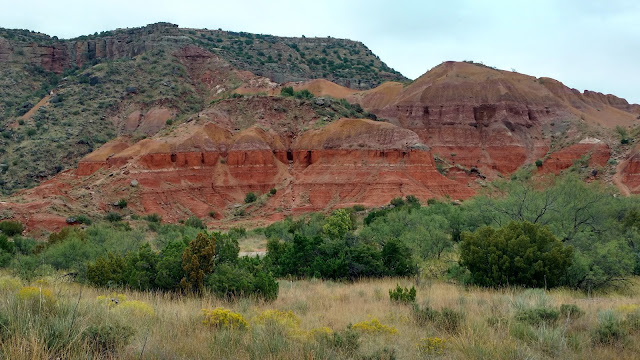 Many spots were begging to be explored but because of the heavy rains over the past two weeks, all park trails were closed. 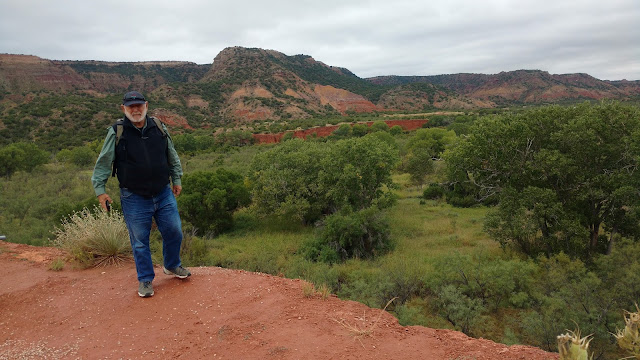 This looks like the side of the road but it is actually a 30 foot drop off.


The canyon is 120 miles long and 600 to 800 feet deep.  The Palo Duro Canyon State Park only includes a portion of this area.  These formations were outside Park boundaries, on a County road where you could get a close up view of amazing spires. 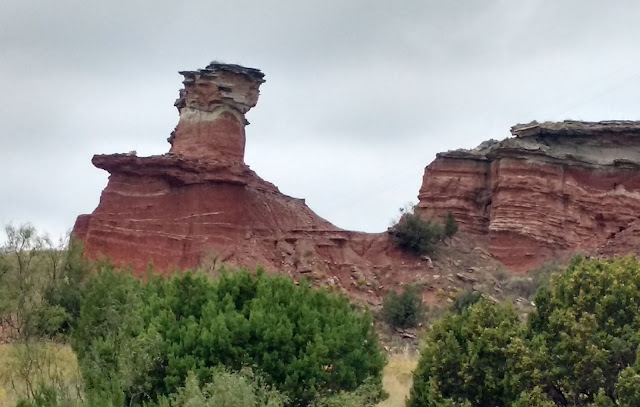 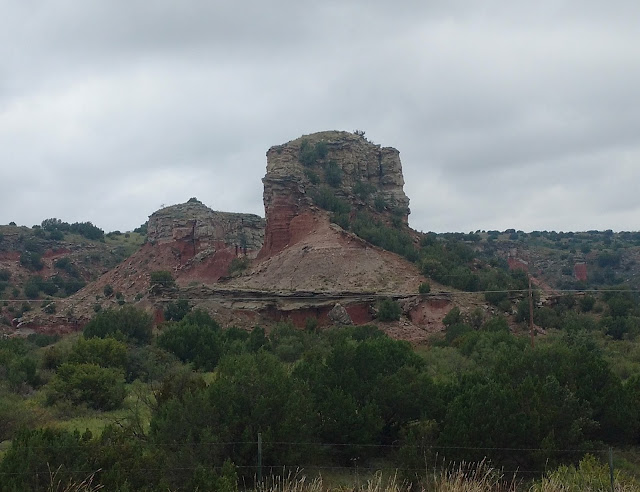 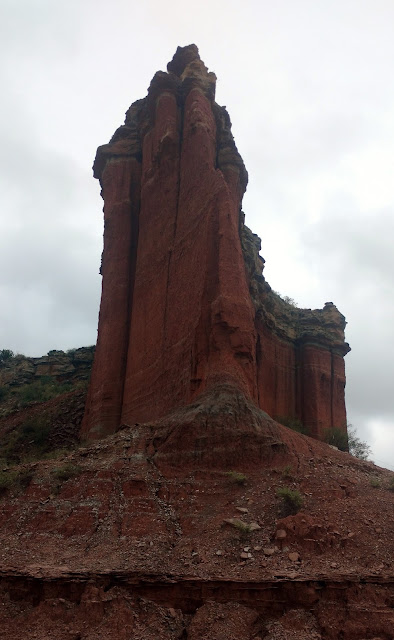 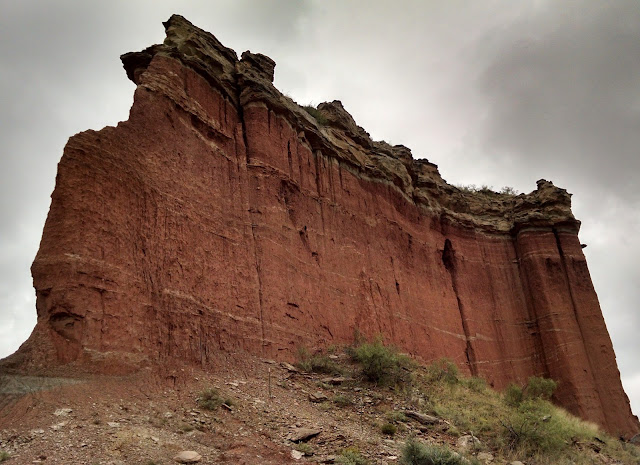 Much of the literature about the park talks about Charles Goodnight.  In 1876 ,Goodnight, in partnership with John Adair, established a ranch within the canyon that incorporated over 1,325,000 acres with a herd of 100,000 head of cattle.  "Everything is bigger in Texas"

Goodnight lived what sounds like a "larger than life" cowboy existence.  From scouting for the Texas Rangers, creating the Loving/Goodnight trail from Texas to Wyoming, partnership in the largest ranch in the Texas panhandle, to saving the original strain of western bison, he certainly stands out.  In fact, it is reported that Larry McMurtry's, Lonesome Dove, is based on Goodnight's adventures.

Today there is a small town he created, named Goodnight, that includes the restored residence he built for he and his wife Molly, in 1887. 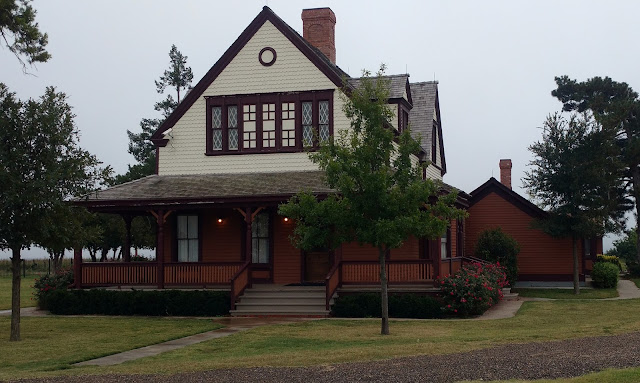 An elaborate home for the era that even included electricity.  The historically accurate restoration includes several original pieces, as well as other period furnishings.

Goodnight's wife, Mary Ann, affectionately called Molly, was know to invite an eclectic group of guests for dinners at the ranch that included cowhands, government representatives,  ranchers, and local Indians, such as Quanah Parker.

She taught school to ranch children and cowboys alike, in the ranch bunkhouse.  She is credited with being the person who saved a couple of new born bison calves that began the restoration of the herd that now exists and roams throughout Caprock State Park just south of Palo Duro. 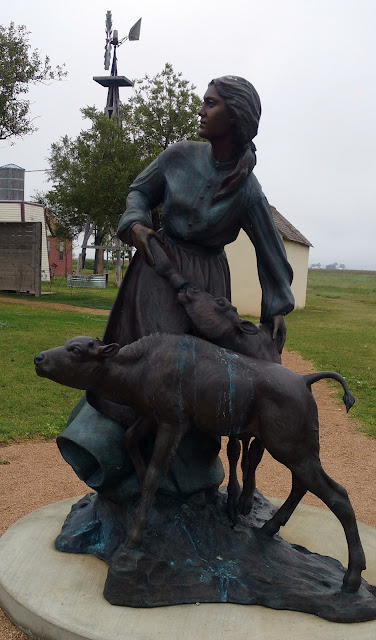 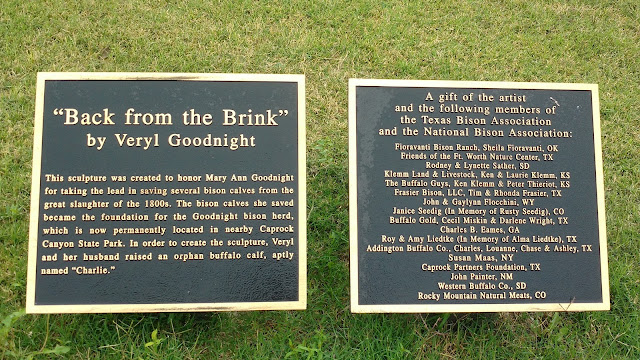 Adjacent to the Goodnight homestead is a small business called Herd Wear Store.  This business sells products made from bison, mostly Buffalo Gold fibers, which combine buffalo fir with silk and/or yak fibers to create soft, strong, and warm  gloves, socks, and hats.  BuffaloGold.net will give you a look at their products.

They also have custom made buffalo coats. 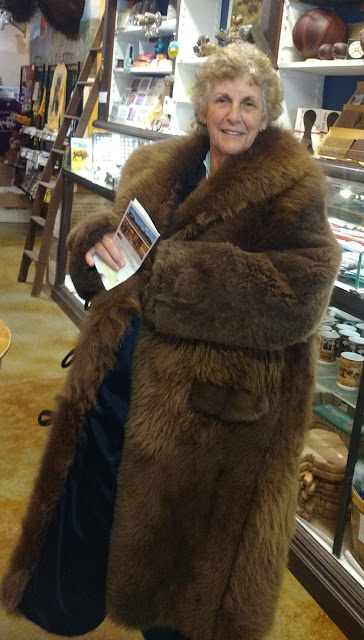 This one would run about 3,000 to 4,000 dollars.  A bit large, but you can order one made to individual measurements. 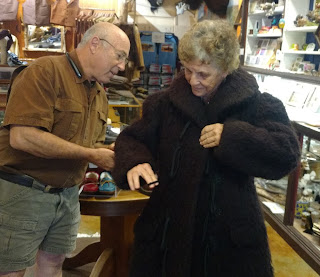 This model was actually an old coat that the owner purchased on ebay.  The Miskin family began raising bison about 30 years ago, regrouping 15 years later with the creation of bison fiber products.  Cecil Miskin said he opened this retail shop as a retirement project.  Sounded like he is putting in about 12 to 14 hours a day.  Some retirement!

It was a friendly, fun stop where we learned a great deal about marketing bison products.  About 55,000 of the existing 450,000 bison in the U.S., are processed for meat annually.  Producers work together to insure that the numbers of processed bison do not negatively affect the overall growth of bison herds nationally.