Amarillo Texas is located in the far north of the Texas panhandle, only 60 or so miles from the New Mexico boarder.  Surrounded by hundreds of miles of flat, dry, (usually) prairie, you would not expect there to be much of interest there.  The main reason we wanted to spend a day or two here was to check out the "Cadillac Ranch".

Having seen pictures of this permanent public roadside sculpture many years ago, it has been on my wish list to see the real deal some day. The location, in itself, is half the fun. 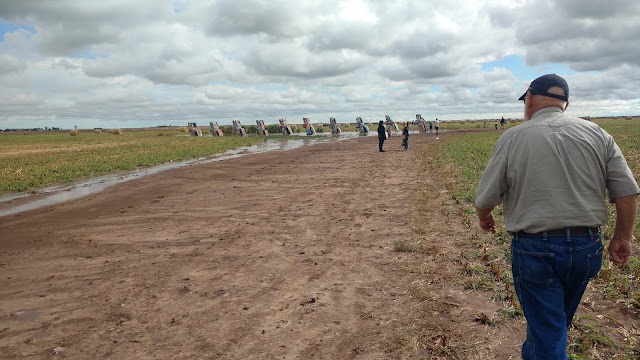 Interstate 40 incorporates a frontage road, that parallels the highway, and allows access to side roads and businesses.  As you drive on this frontage road, you pass  an occasional RV park or side road, but mostly acres and acres of corn fields.

You need a sharp eye to pick out ten tall "things"  off  toward the back of a field where corn had been recently harvested.  We might have missed it if it weren't for the dozens of cars parked by a metal gate opening through a barbed wire fence.  As you can see, it is a distance back from the road, and today it was mud all the way..

Not usually surrounded by water, these ten Cadillac cars were first displayed, half buried in the dirt, back in 1974.  Three young men from an art group called the "Ant Farm"  came up with the idea, somewhat symbolizing the birth and death of the Cadillac tail fin, and  presented it to millionaire Stanley Marsh 3. 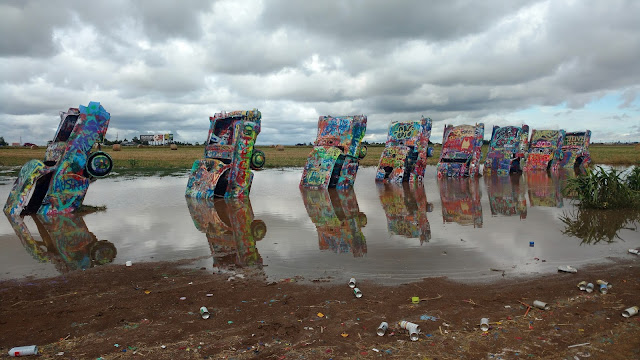 Marsh donated the land and became a long time  patron and supporter of the project.  The cars, vintage 1949 thru 1963 were found in junk yards, or as running used cars.


Long since having lost their original colors, and many parts, spray painting graffiti is not only tolerated, but encouraged.  There is a dumpster at the gate for empty cans, but those that are not quite empty after an art project are left for others to use up.  This young lady was totally prepared for the experience, complete with paint, stencil, tape, and mud boots! 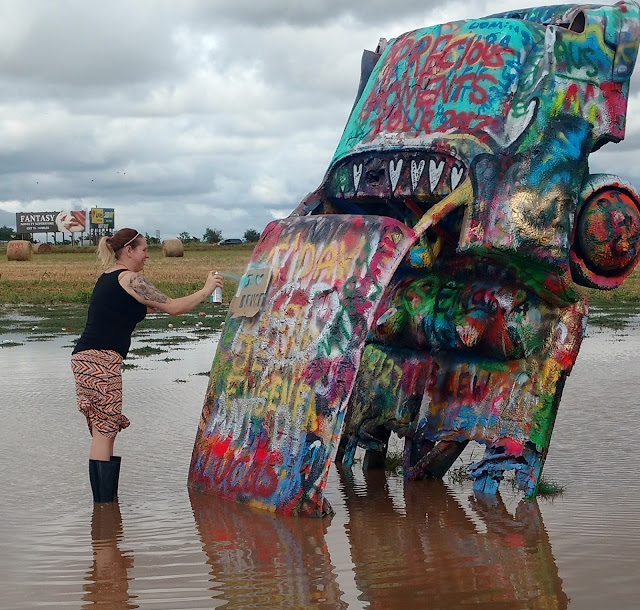 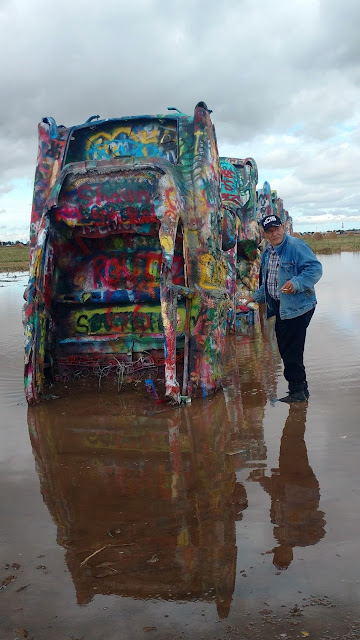 Not only the young folks get into the spirit of this interactive art project, this gentleman of 70 years, was having a blast. 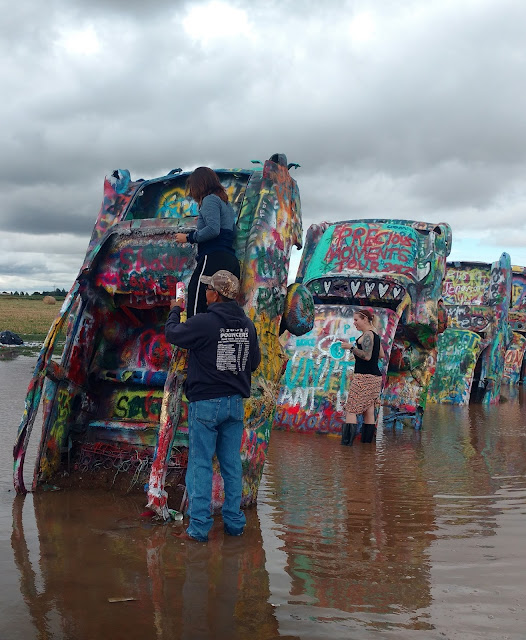 Father and daughter (I think), working together. 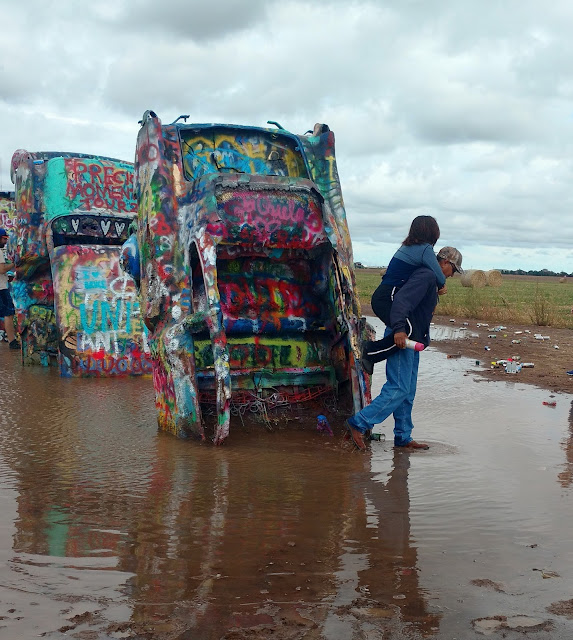 She painted, he carried her and the paint, so she didn't get wet and muddy 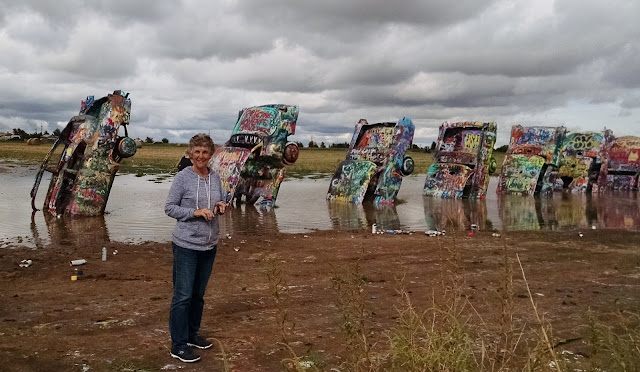 All I did was take pictures.  No spirit of adventure. (Mostly no boots) 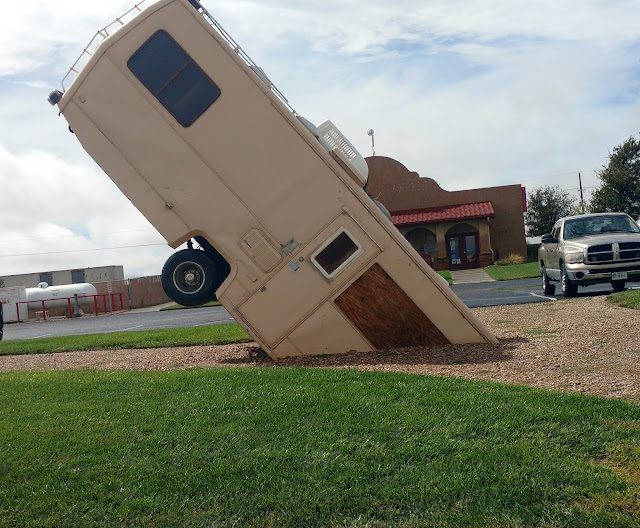 The Cadillac Ranch mania has extended to local RV parks.  I thought this was the most clever. 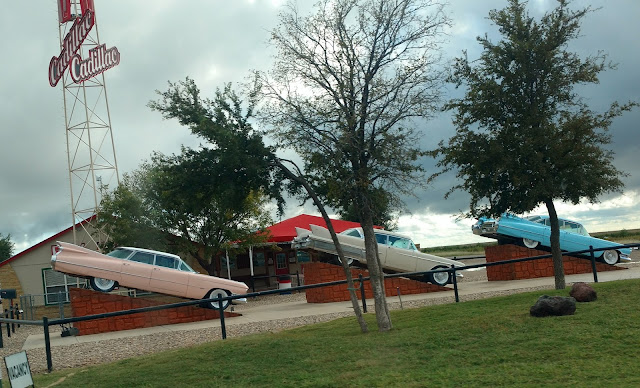 Another RV park has what looks more like how the Cadillac's appeared when they were originally sunk in the mud.

Later that day we picked up a local brochure listing things to see in Amarillo.  One recommendation was the RV Museum. 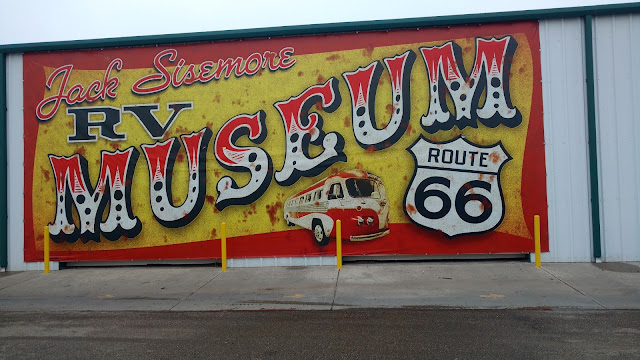 Turned out to be an extensive collection of old restored camper trailers of all types. Currently the Jack Sisemore Traveland RV Sales and Service establishment is enormous, but according to the published story, he started out buying one RV to use for vacations and to rent out the rest of the year.
It was a 1974 Winnebago and Jack was the first Winnebago dealer in Texas. 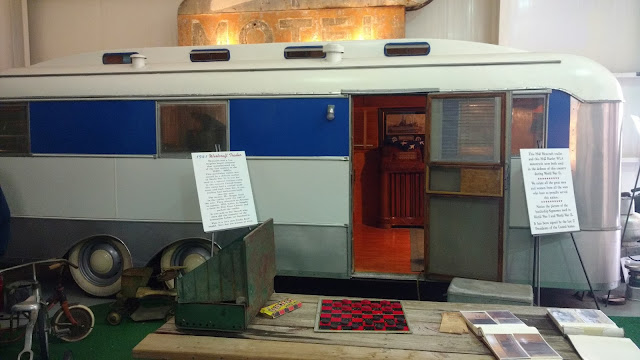 Each trailer has been restored to original condition or displayed as they were found. They all include a sign giving the details of where they were located, manufacturer, and how much restoration needed to be done. 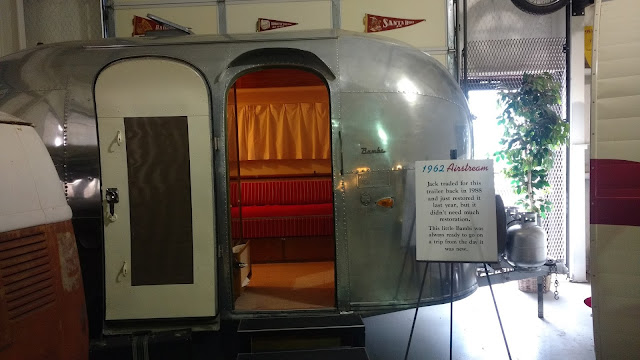 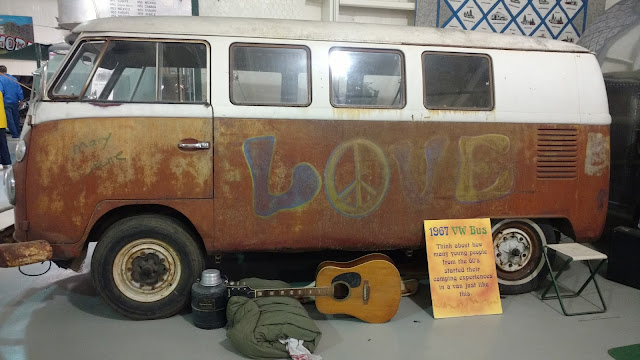 This 1942 Harley Davidson motorcycle was used in WWll 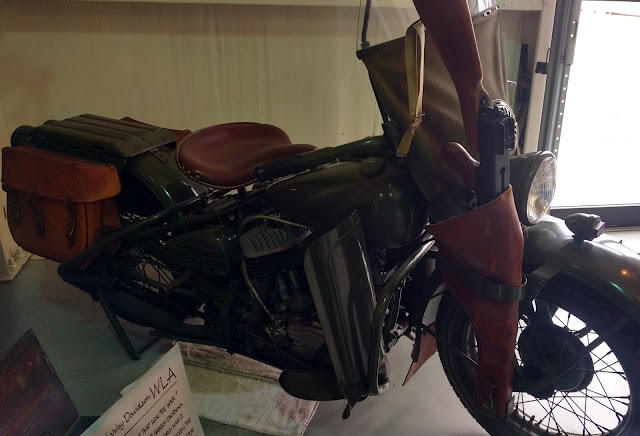 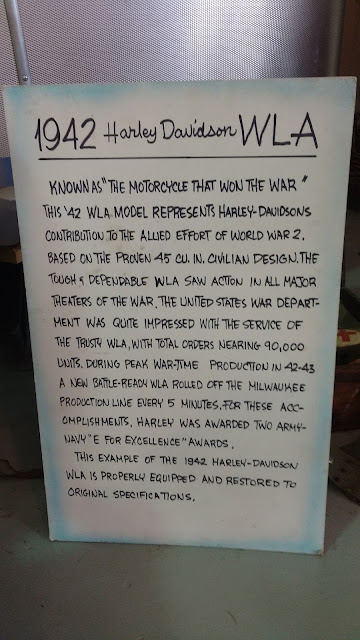 The museum had a very large collection of motorcycles.  This was my favorite.  Great way to spend an afternoon, and there is  no admission charge.

We rounded out the day with an early dinner at THE BIG TEXAN steak house. 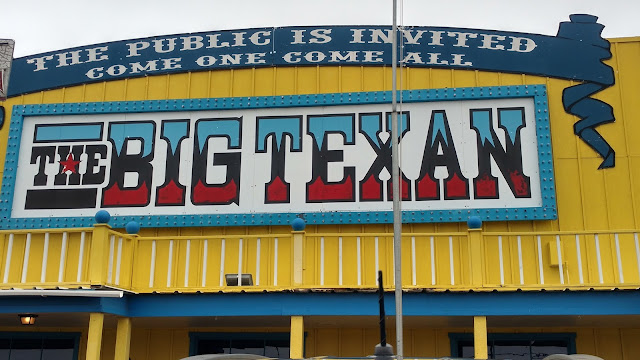 The famous Route 66 passes through Amarillo and although its hay day is long past, the highway still has a mystique, along with many GIANT signs that were popular when the road was the primary route between California and Chicago. 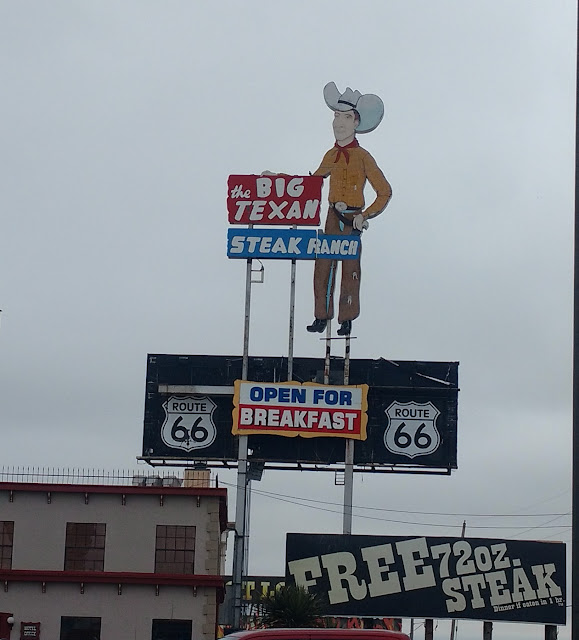 Big Tex and  this larger than life steer are two examples of the roadside attractions on the old Route 66.  Better than billboards, I'd say. 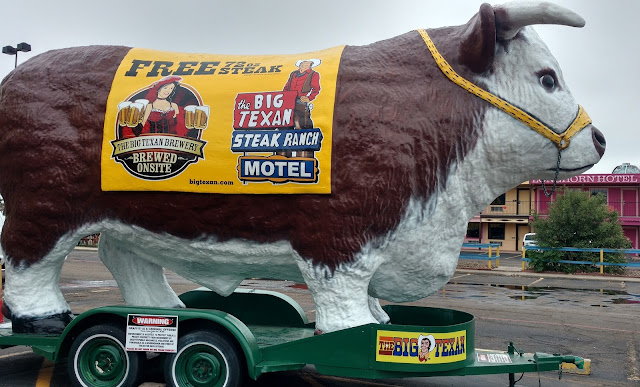 The Big Texan Steak Ranch is known, as the sign says, for the 72 ounce "free" steak 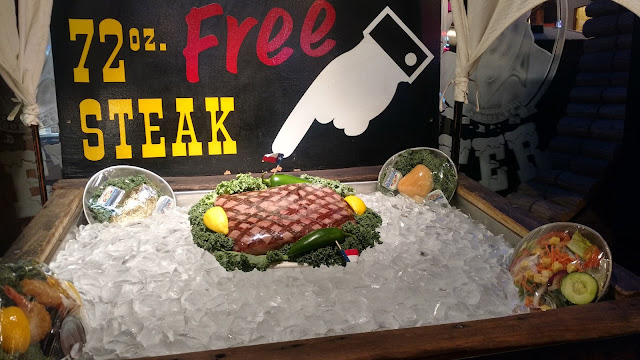 It is free if you can eat the entire steak, baked potato, roll, salad, and the shrimp appetizer, all within one hour's time.  If not it costs you $72. 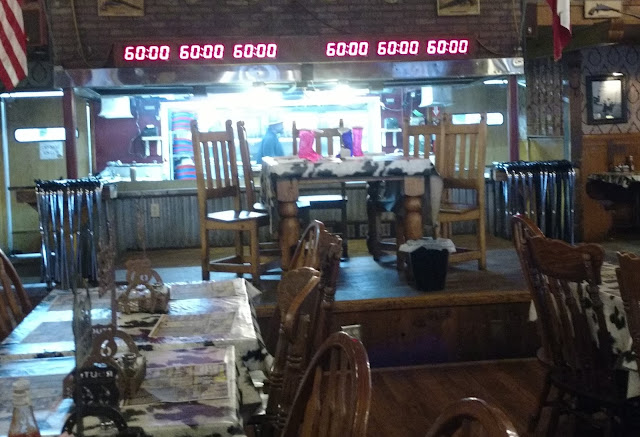 Those who take the challenge sit at an elevated table with a countdown clock, clicking off the seconds, directly overhead  When we arrived there were two men at the table, with ten minutes left on their clock.  When the timer reached three minutes, they both got up and left, most likely to pay their $72 bill.


My sirloin was 8 ounces and it was all I could do to finish that much. 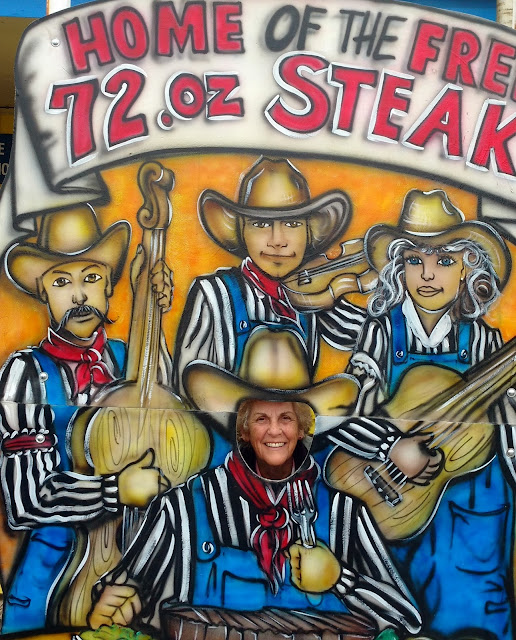 Another fun day of being a tourist in Amarillo, Texas