When we left Jasper National Park, we traveled south, back to the entrance for Banff, then east out into the foot hills to the town of Rocky Mountain House. This town is named after the fur trading forts built by the Hudson Bay Company and the North West Company. Both companies built trading posts at this location in 1799 within a week of each other.

In Canada they called their fur trading stations “houses” not forts. At these houses the Indians brought their furs in to be traded for supplies, the “Voyagers” packed and transported the tons of furs back to the trading company’s headquarters in Montreal, picked up supplies for the houses and went back to the Rockies, all by canoe or York boats.

Rocky Mountain House is of particular interest because David Thompson used this house as a base during several of his expeditions. He was the famous surveyor who mapped most of the western Canadian mountains and rivers. He is reported to have traveled over 50,000 miles in canoes, horseback, or on foot making amazingly accurate maps during the 1790s through the early 1800. His goal while working for both trading companies was to find new routes and new tribes with which to trade. However, eventually he simply explored and made maps on his own.

Our first introduction to David Thompson was through the book Sources Of The River: Tracking David Thompson Across Western North America, by Jack Nisbet. This book recreates the life and times of Thompson from his journals and later memoirs. It is a great intro to this well known Canadian explorer.

The David Thompson National Historical Site has been constructed on the site of four trading houses. Currently the museum is undergoing a huge renovation and was closed but there is a self guided trail that has narrated stations describing the life of a “voyageur” and the daily duties at a trading post. There was also what they have named the “toy fort”, which is a small scale model of the last fort built here and abandoned in 1875. This weekend was Harvest Weekend so museum employees were in costume making porcupine quill and bead work designs, open fire cooking, and displaying the different animal furs that were traded at the houses.

Much credit is given to the Metis people for helping these fur traders learn to survive in the wilderness. The Metis were those of mixed European and Indian decent. The Hudson Bay company discouraged inter-marriage with natives but the North West Company realized what an asset these women were to the camp and supported such unions. At the museum today, a member of the Metis tribe cooked buffalo stew, bannock, which is a type of biscuit served with choke cherry jelly, and steeped Labrador tea for visitors to enjoy.

Two of the employees put on a wonderfully amusing puppet show all about the life of David Thompson. The puppets, one a French Canadian from the North West Company and the other an Englishman from the Hudson Bay company, told the story and poked fun their different attitudes and customs while in the process. It was a really fun show, interspersed with song and a sing along chorus for the audience. 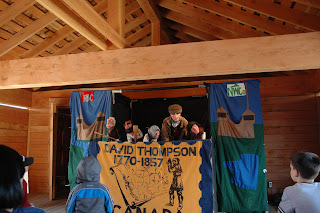 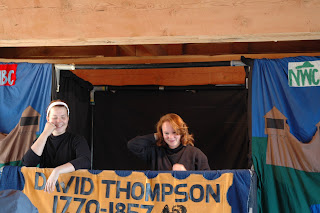 Puppet theater and the puppeteers
Posted by cooktravelogue2007-8.blogspot.com at 1:56 PM