In 2003, when we did the Lewis and Clark trail, we had visited Fort Benton and said we would like to come back some day. The town has managed to save many of the building that were build during the boom times in the 1860’s to the 1890;s. Fort Benton was the last point on the Missouri River that was navigable by steam boats. This port was the jumping off point for supplies going to Canada, up the famous “Whoop Up Trail” and to the gold fields in California.

One side of Front Street is lined with old historical brick buildings, the other side is the river. Posted along the river side are signs that tell about each building, with pictures taken at a time when they were occupied by the original owners. Building after building boasts a National Register of Historical places plaque.

As a treat we stayed in the Grand Union Hotel. This hotel was built in 1882 at the height of Fort Benton’s hay day, at a cost of $200,000. A pretty penny in those days. Unfortunately in 1886, the railroad came through this area and by passed Fort Benton. The steamboat era came to an end along with the town’s prosperity. Over the next 100 years the hotel was bought and sold many times, going from bad to worse. Finally in 1996 a local couple bought the building and have renovated the hotel while maintaining as much as possible of its past beauty. 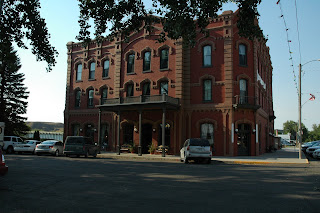 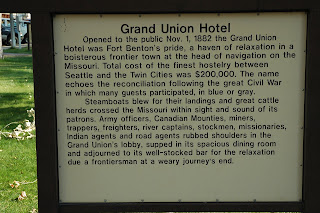 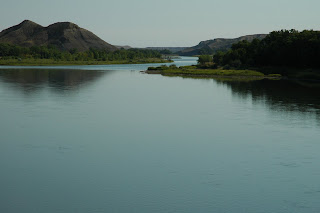 The Missouri River taken from the Grand Hotel 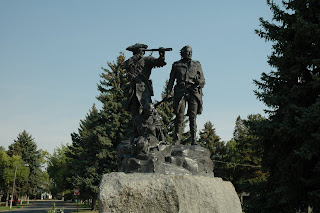 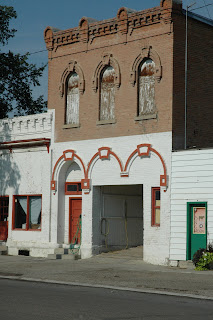 Some of the historical buildings in Fort Benton