On Friday, the 7th, our mail had not arrived yet so we headed back up to Glacier. With our truck noise fixed and a week of down time we felt ready for more awe inspiring beauty. On the drive from Great Falls north we took route 89 through rolling prairie and cattle country. About half way there it began to rain and continued for the rest of the trip and into the night. We camped at Many Glacier campground and were glad that we were not in a tent since it was cold and very wet. Our hot soup in our warm camper was just right for two old EX-backpackers.

Many Glacier is on the East side of the National Park and is considered by some, the heart of Glacier. It is north of St. Mary’s where the Going to the Sun Road heads west and it is less crowded than the area on the west of the park. The campground backs right up to the wall of a mountain, with many trails leading into all the surrounding valleys and peaks.

We choose a moderate hike to Ptarmigan Falls, but once there we were encouraged to go on to the lake. It was a spectacular walk, winding up a valley between several different snow covered mountains. We ended up above the snow line. When we arrived at the lake, we could see where the trail continued on another mile further and 500 feet higher to Ptarmigan tunnel. This tunnel was blasted through the mountain back when travel from the eastern to the western side of Glacier was by horseback. Everyone we talked to encouraged us to continue forward, that the climb was well worth the view on the other side. However, Marlin had developed two blisters from his boots and we were already doing a nine mile round trip, so we left the lake and started back.

Walking in we saw several mountain goats, one quite close by was a billy goat. He was sitting on a rock cliff overlooking the trail, just laying there chewing his cud and watching the hikers pass below him. On the way back there were two bears eating berries like mad, trying to get in their 20,000 calories that they consume daily during this time of year.

Another trail we took made a loop from the campground to the Many Glacier Hotel then around Swiftcurrent Lake and back. The hotel is another resort built by Great Northern Railroad to entice tourists to the park. The Great Northern was the railroad that built all the resort hotels in this area and in Canada. I think, in error, I called it the Canadian Pacific Railroad in some of my other postings. Slip of the lip.

When Glacier became a National Park, there were 105 glaciers. Today there are only 26 and it is predicted that by 2030 the park will be glacier free. The Many Glacier area boasts five glaciers. From the hotel you can see four small ones. Posted pictures taken in 1849, 1906, and 1998 show the decline of these once massive rivers of ice. The largest, Grinnell Glacier, is now listed by two separate names. The one part that remains on a high rocky ledge with a cliff below, is now called Salamander Glacier, the lower part, much smaller even than in 1998, has a huge lake at the base that did not exist in 1849.

Last visit we rode the shuttle over the going to the sun highway. This time we drove, at least to Logan Pass, which is halfway. At the pass I got pictures of the classic red touring buses that ferry passengers all over the park. The buses used to be called “jammers” after the noise often heard when the drivers jammed the gears as they drove the winding mountain roads. In 1927 Glacier Transportation Company was given the passenger concession. Thirty six red canvas topped touring cars were purchased in 1930 and these vehicles roamed the park until 1998 when metal fatigue caused them to be unsafe. Instead of completely replacing the classic cars, Ford Motor Company refurbished the body and put it onto a new chassis and motor, now propelled by propane instead of gasoline. The buses still have a canvas top that is rolled back in good weather to allow for views in all directions.

Our last stop was at Two Medicine. There is a long road with many hair raising switchbacks to get there and very few trails leading out from this spot, but we liked it best for its quiet beauty. 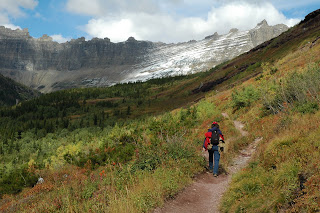 The trail to Ptarmigan Lake 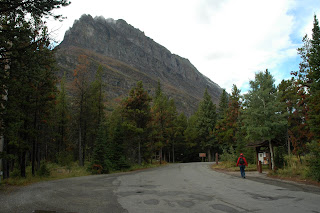 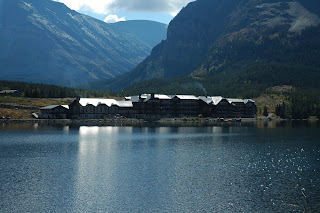 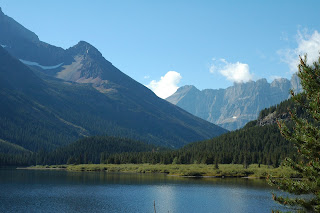 Swiftcurrent lake at Many Glacier Hotel 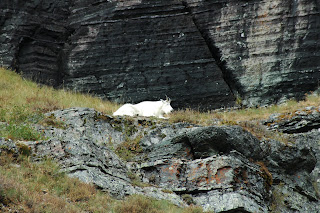 Billy Goat on the trail 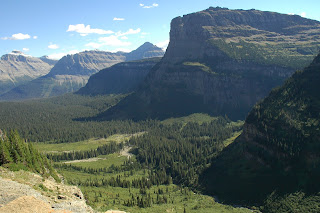 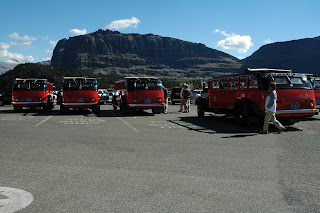 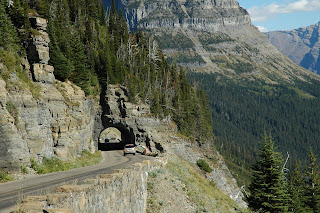 One part of the Going to the Sun road 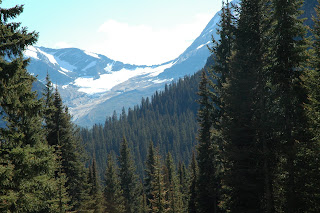 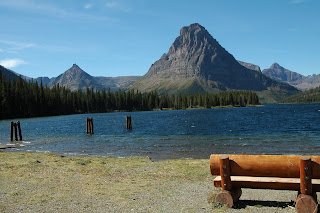