Another interesting spot that we visited in the Sopchoppy area is Wakulla Springs State Park, a 6000 acre wildlife sanctuary.  The springs, from which the park takes its name, puts out 400,000 gallons of water per minute. 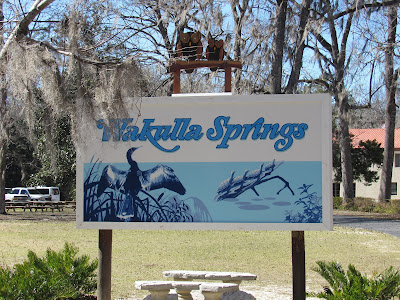 We arrived just in time to take the 12:00 boat tour down the Wakulla River. 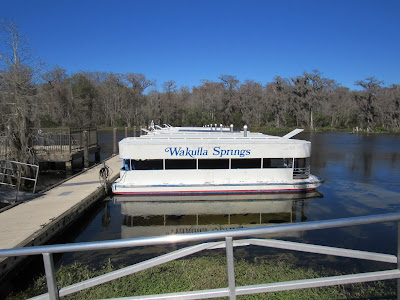 There were about 15 or 20 people waiting for the tour today.  From the number of boats at the dock, it looks like there are much bigger crowds at other times of the year.  We keep forgetting this is winter here in Florida. 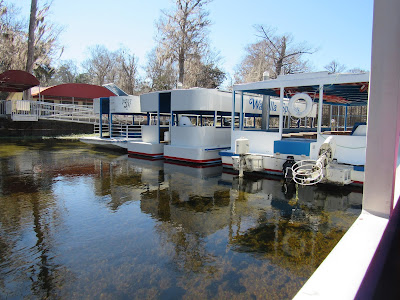 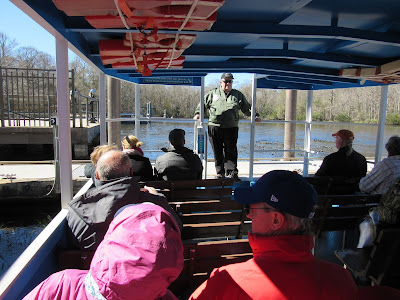 Captain Bob lays out the coast guard boating rules with a light chuckle, since most of the river is shallow enough to wade into shore 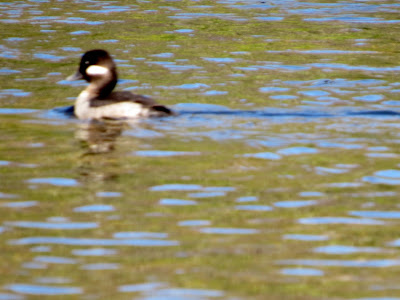 The water was full of ducks.  We saw Buffleheads, Mergansers, coots, Moorhens and many other species 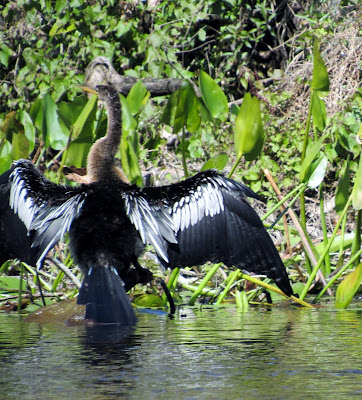 An Anhinga drying her wings. 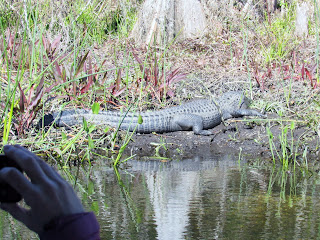 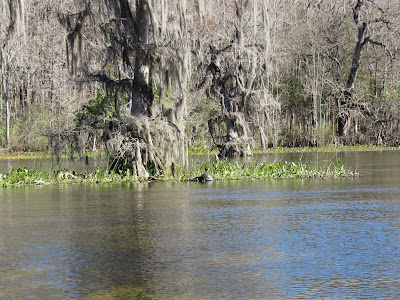 
Wakulla springs has been the site of several Tarzan movies as well as the 1950's  Creature From the Black Lagoon.  Our Captain took the boat into the small backwater where the "Creature" lived! 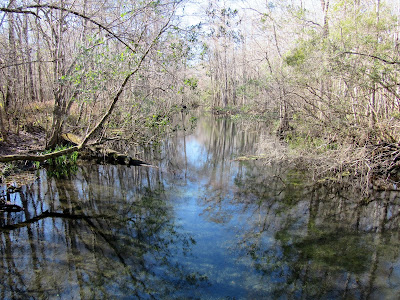 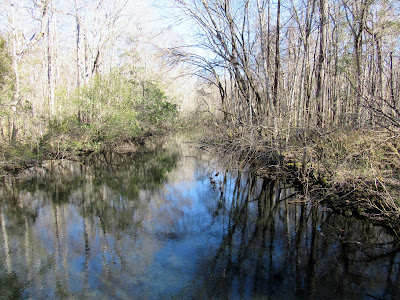 Makes me want to rent that old classic and watch it again.

For the final leg of the journey Captain Bob took the boat into the area where the spring bubbles up for underground.  There were several manatees there enjoying the warm 75 degree water. 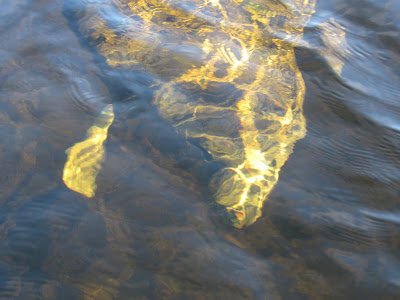 The sun was so bright that day the reflections off the water make it difficult to see the manatees.  They came right up to the boat. 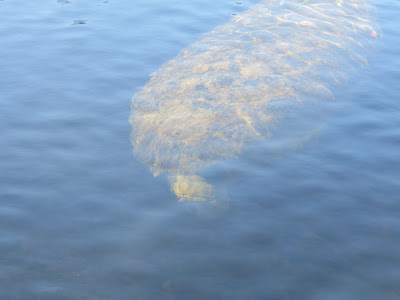 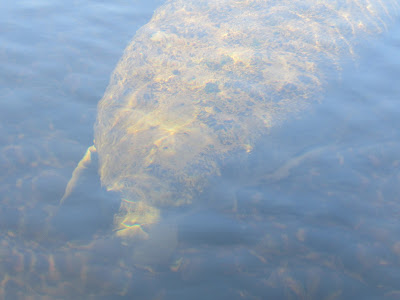 After our tour ended we walked, and climbed, the diving platform located over the spring opening.  No swimmers today, but diving into the spring from this three story tower is popular when the temperatures are warmer. 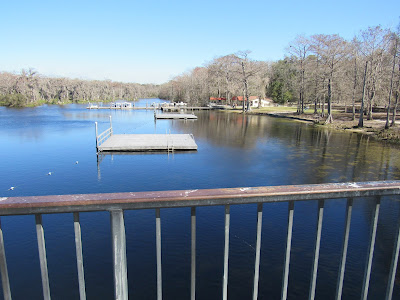 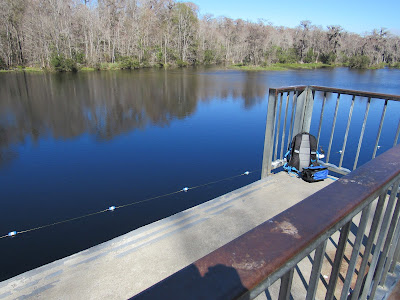 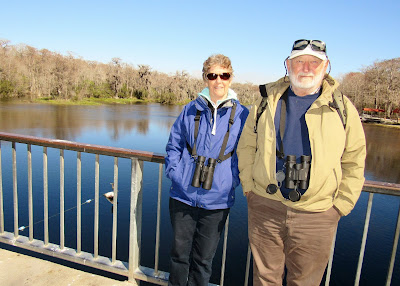 We were not dressed for swimming 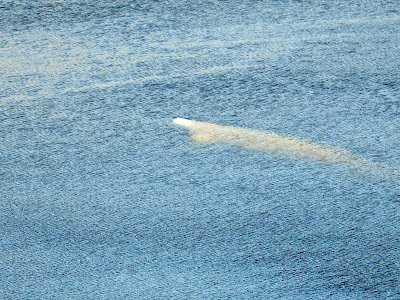 Two manatees stayed around after the boat left and we could see them quite well from the tower.

Wakulla State Park also has a hotel on the grounds.  This State Park was once part of the Edward Ball estate.  Mr. Ball purchased the 4000 acres surrounding the spring, back in 1937 and built Wakulla Springs lodge as a guest house for his friends. It sounds like no expense was spared when it was constructed with imported marble and tile.  He hired the best metal, tile, mason, and stone cutter craftsmen, as well as  painters and artists.  He even ran a telephone line over 80 miles from Port St. Joe, to the spring.  Edward ball was the financial manager for the DuPont family. He donated the guest house and land to the State of Florida in 1968. 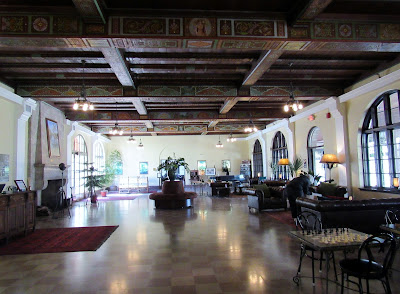 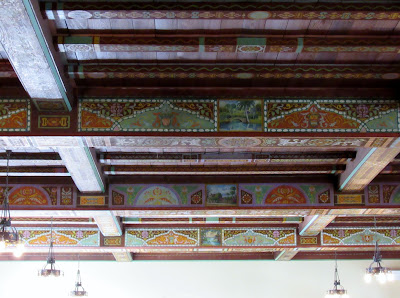 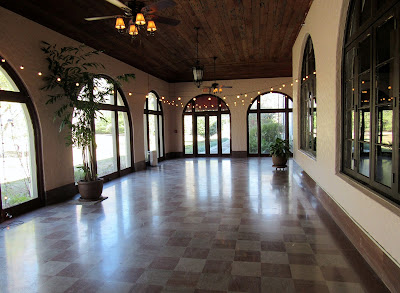 Marble tiled porches leading outside to the grounds 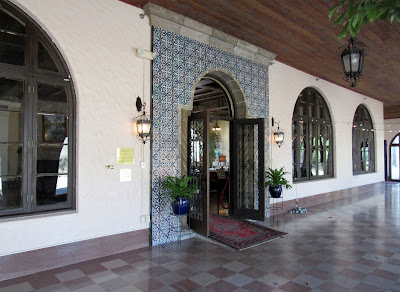 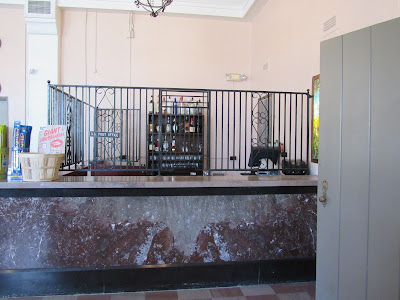 At one time there was an active post office here. 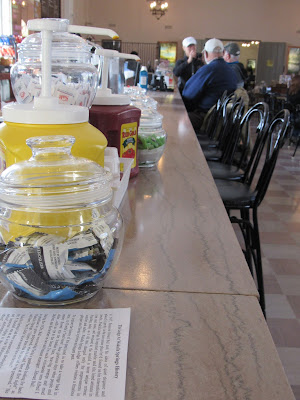 This original counter is all marble

Posters for the movie Creature of the Black Lagoon are available in the gift shop. 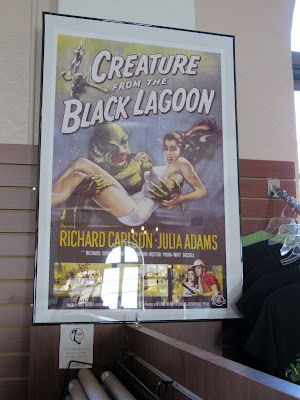 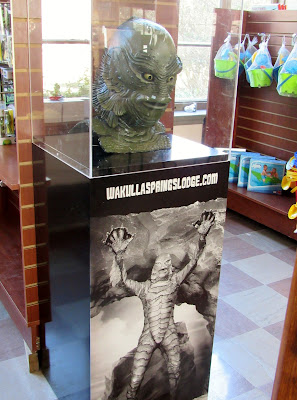 We did not get to see any of the rooms in the hotel but each of the 27 rooms have large marble bathrooms, walk in closets, and period furnishings.  It would be fun to spend a night here pretending you were a guest of Edward Ball and his sister Jessie Ball DuPont.
Posted by cooktravelogue2007-8.blogspot.com at 11:05 PM