When we are having company it is always fun to plan places to go and things to do.   Mary and Mike Hartt arranged to come down to Mission for a visit since Mary was running a marathon in Houston, just 350 miles north of here.  The first full day they were here we took off for South Padre Island.  We called in the morning to see if the dolphin tour we booked was still on because it was very foggy.  We were told it would go when the fog lifted.  We got to the island at noon and the sun was out. 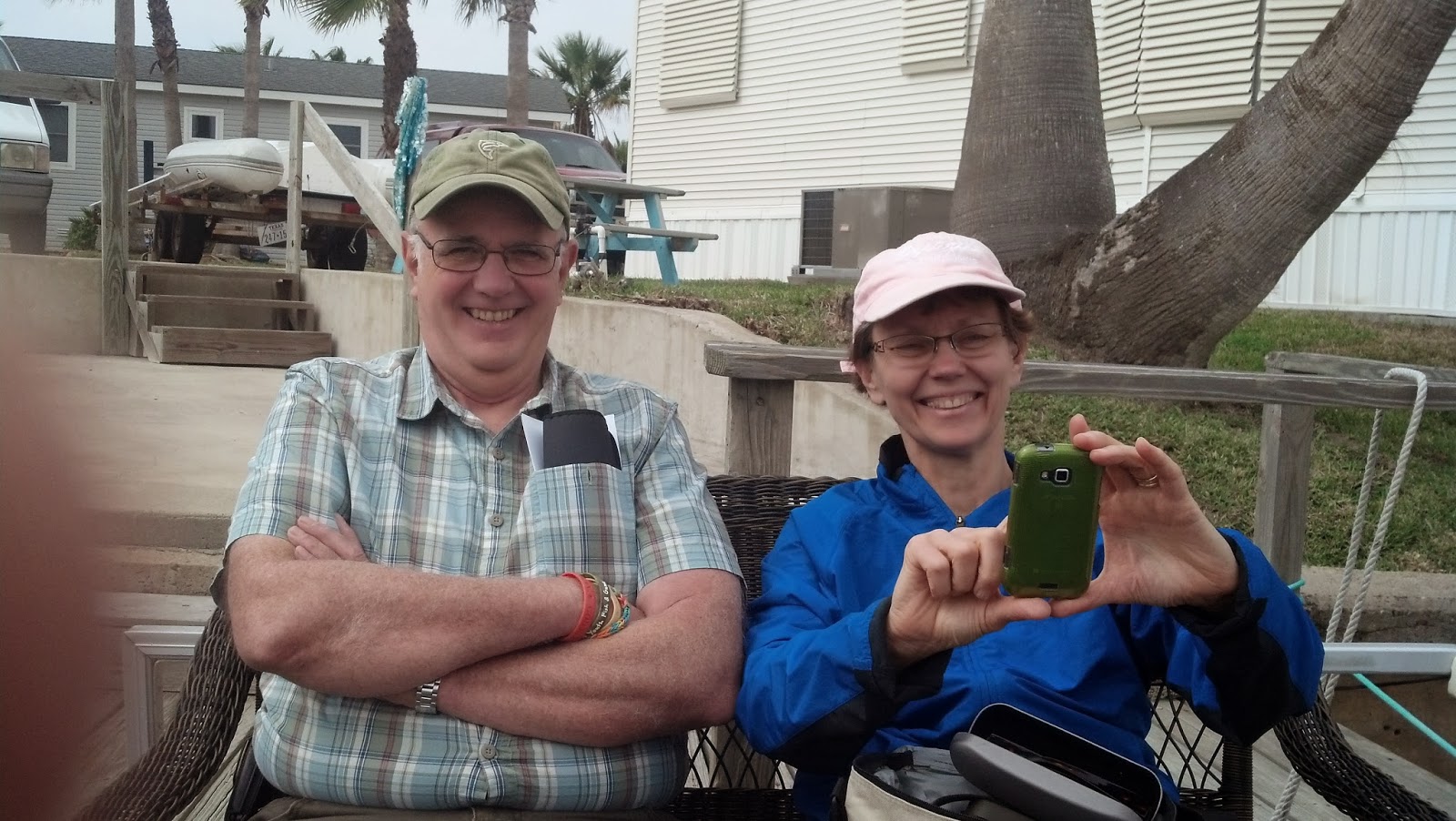 Mike and Mary settled on the boat.  We were taking pictures of each other at the same time. 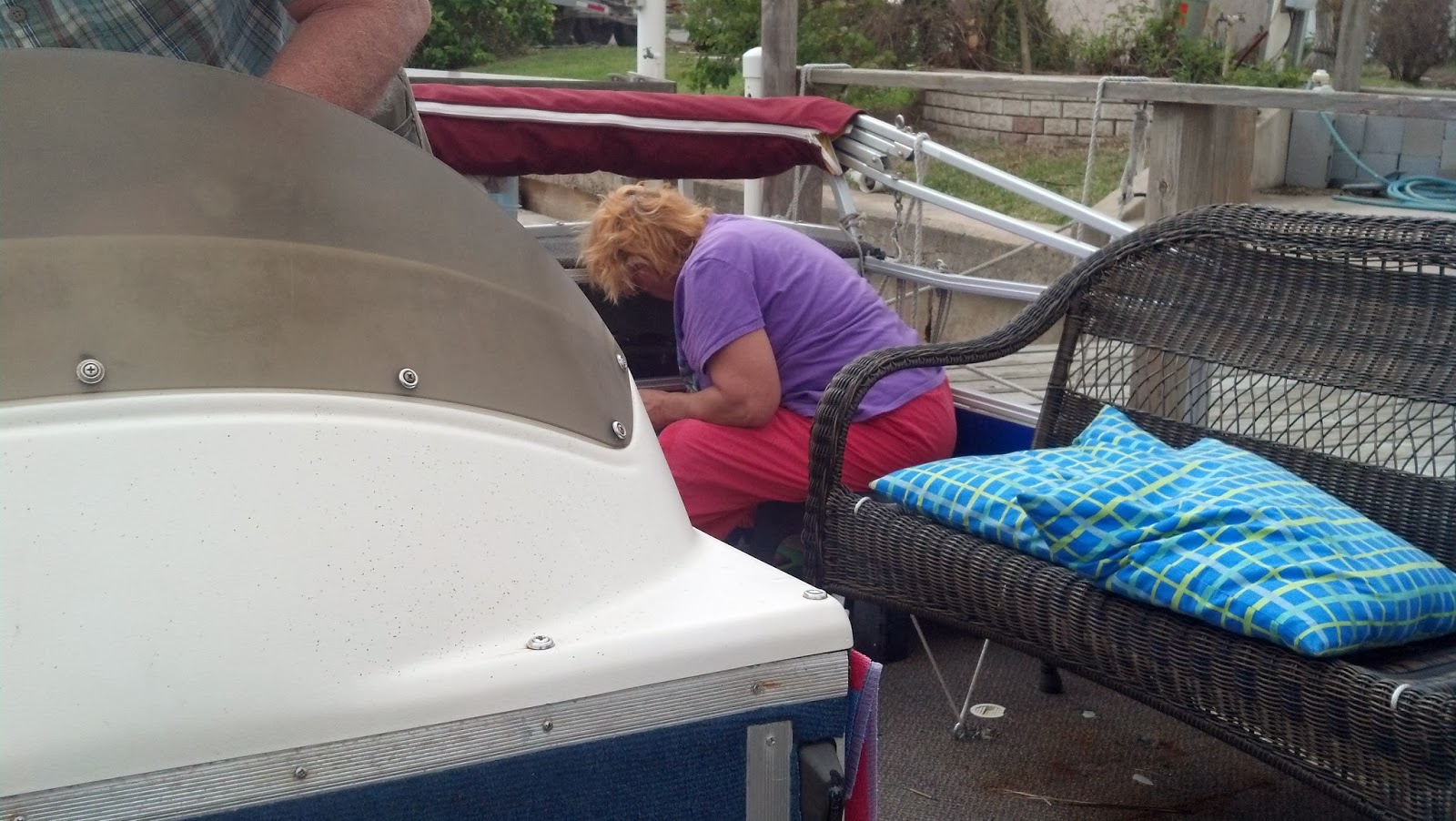 Not off to a good start!  Wiring to the battery had come loose and needed a bit of MacGiver to get us going.

We scheduled this dolphin tour from a woman who took small groups of 6 or less on her open party boat.  We thought this would be more interesting than a large group boat. 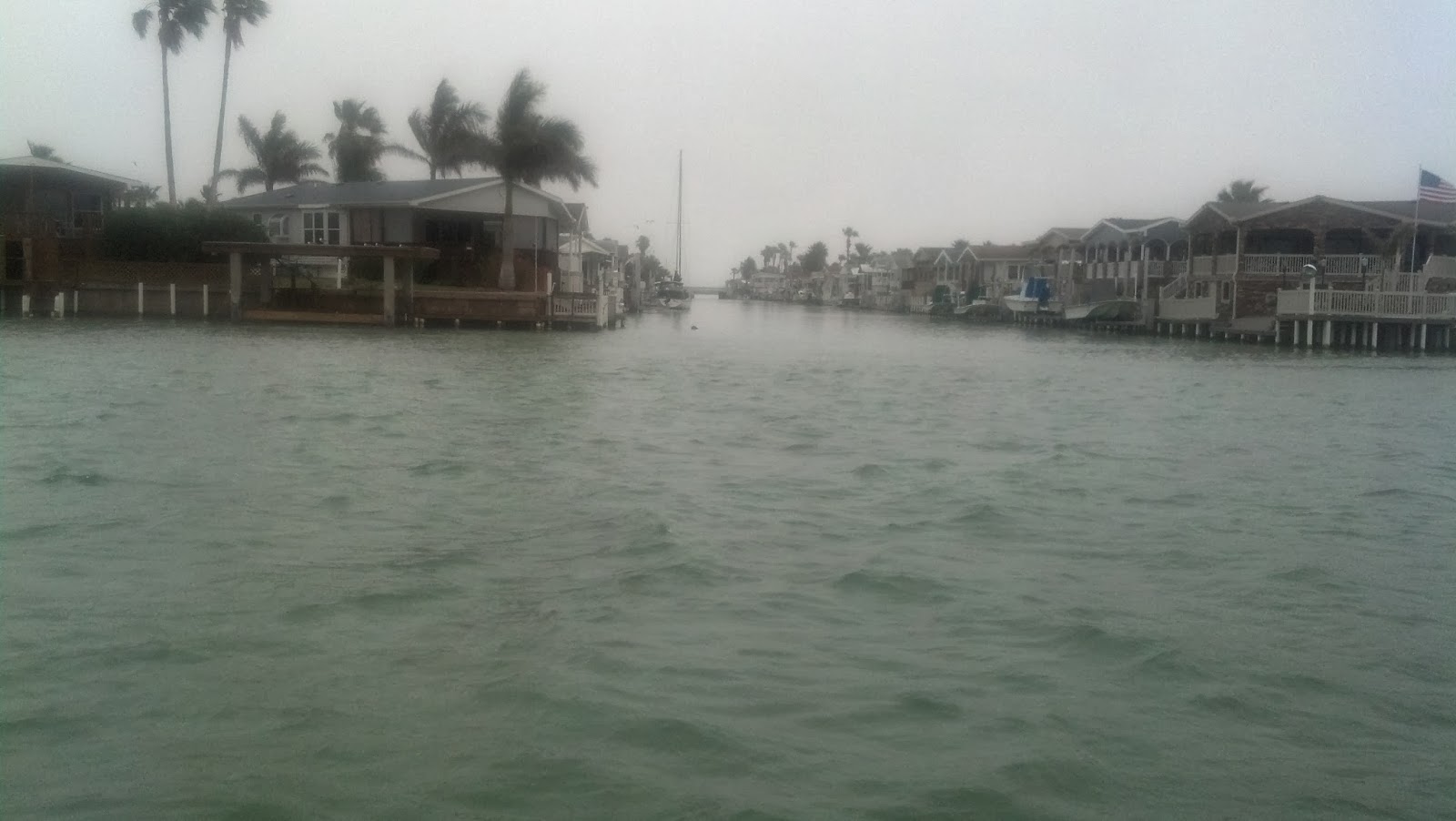 The area where her boat was parked was a different kind of RV park.  Each lot faced, or backed up to, a canal that lead to the bay. 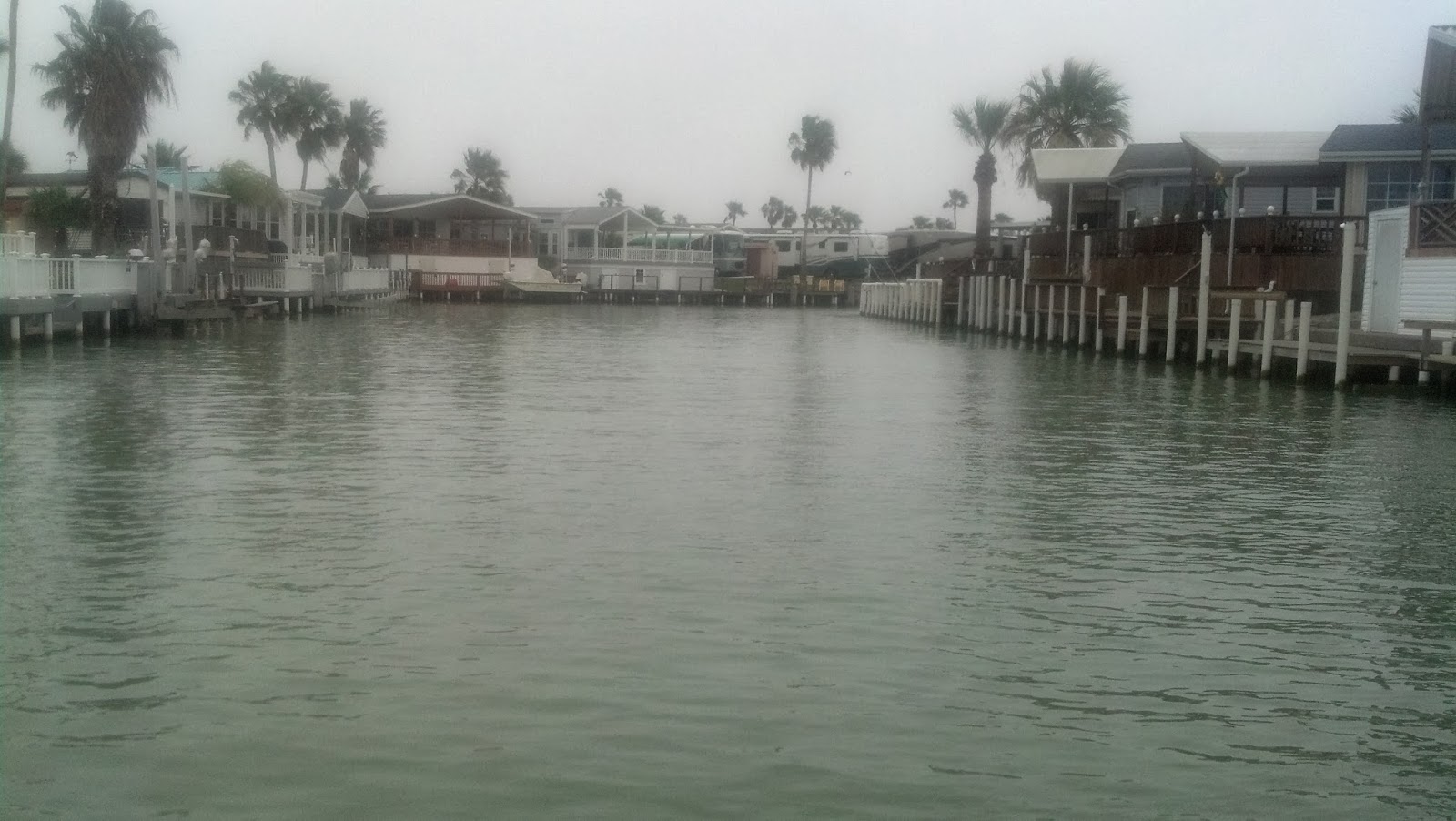 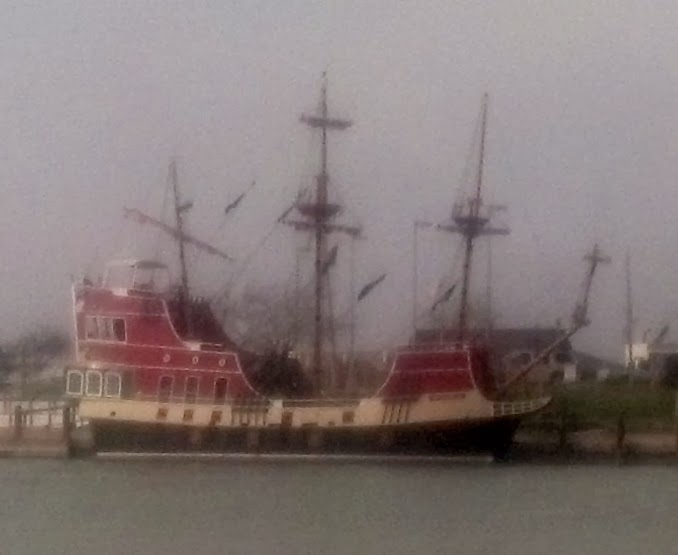 This pirate ship was docked across from our departure point.   You can take a cruise on the party pirate ship for a tour around the bay.  that could be fun.

We did see lots of dolphins.  Some even swimming right under the front of the boat.  Unfortunately, I was not able to get any usable pictures of the joyful creatures.  I had hoped that on this small tour we would get lots of dolphin background, like their habits, range, families, etc.  Although Scarlet said she had been doing this for 20 years, we got very little information from her.  Maybe we did not ask the right question.

The plan was to take a dolphin tour Monday afternoon, stay overnight there, and Mike and Marlin would do an all day deep sea fishing trip.  Mother Nature had different plans.  As we were returning from the dolphin tour, the fog came in thick and the temperature turned cold and very windy.  The forecast was for more of the same the next day so we had dinner at The Buccaneer and called it a day.

One day we visited "The Old Hidalgo Pump House" which is the location of the steam-driven irrigation pumps that transformed Hidalgo County into a year-round farming phenomenon.  The tour docent, a very enthusiastic woman named Viola, first explained that the Rio Grande Valley is no valley at all.  It is the flood plain for the Rio Grande River, but was labeled as a valley in order to sell land.  It is part of the World Birding Center, because the acreage surrounding the pumphouse is open with grounds and trails that have been intensively landscaped to attract birds and butterflies.

Inside the pumphouse, you can wander all around the huge machinery. The boilers, which were originally wood-fired with mesquite, then converted to oil, then natural gas, then diesel, are still in place. Our guide explain what the machinery was used for, how the water was pumped out of the river and into irrigation ditches that stretched 20 miles north from the river.  This vast irrigation system totally changed the landscape of the valley from thorn scrub forest to rich produce farmland. 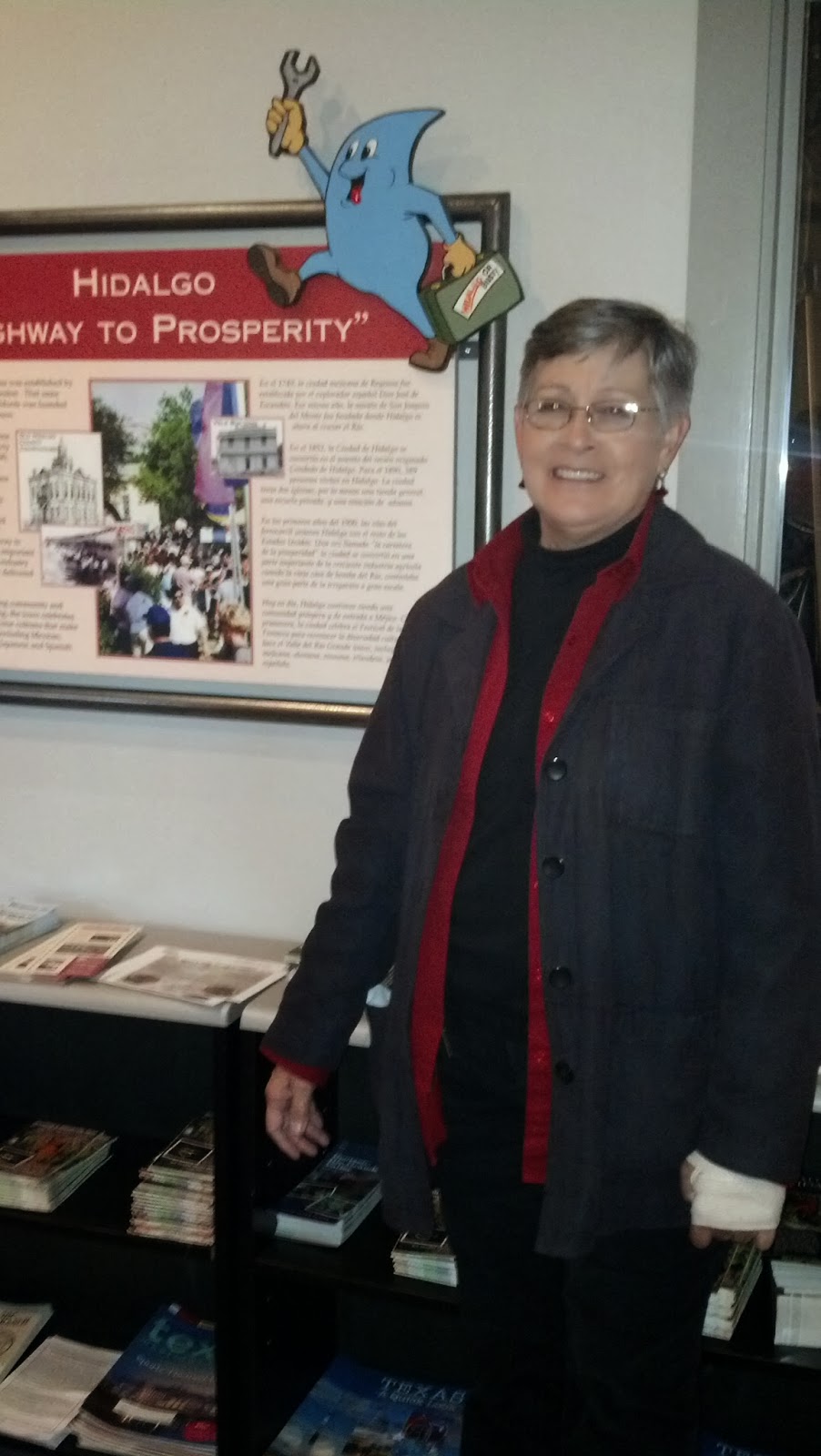 Viola, our tour docent is the retired director of the Pumphouse museum.  Her enthusiasm was boundless and she had the history of the area at her finger tips.  She told the story of the man who saved the facility from being torn down.  He was apparently someone with connections, because when he passed by and saw demolition equipment ready to roll, he asked them to stop, went to higher authorities, and the buildings were saved.  It pays to know the right people! 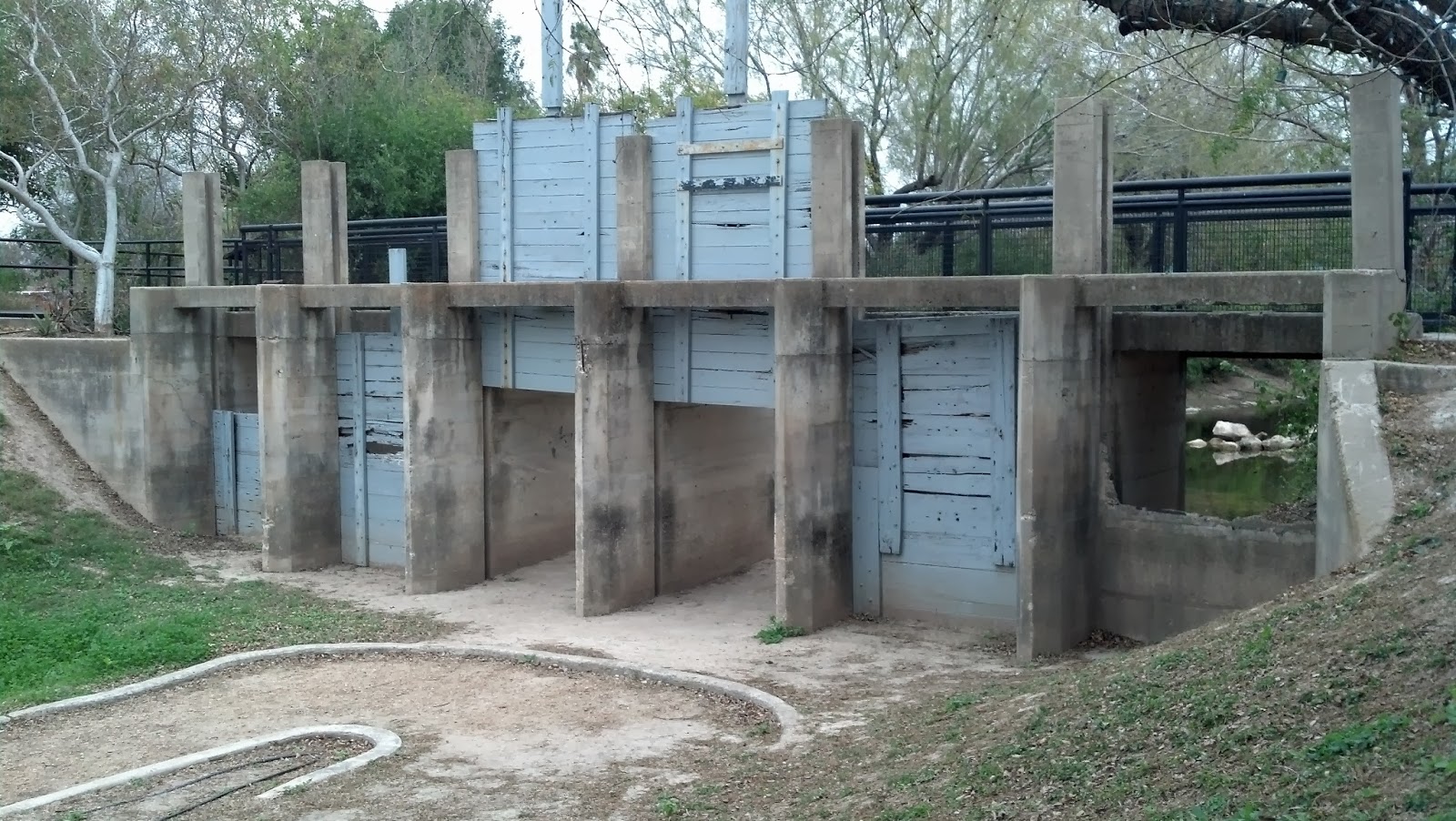 As you enter the grounds to the pumphouse you cross over the top of these huge gates. They once controlled the flow of water into the irrigation system. The pumphouse once sat on the Rio Grande, but a flood in 1933 changed the course of the river, which is now a half-mile away. A channel was dug from the pumphouse to the river, to bring river water to the huge intake pipes. 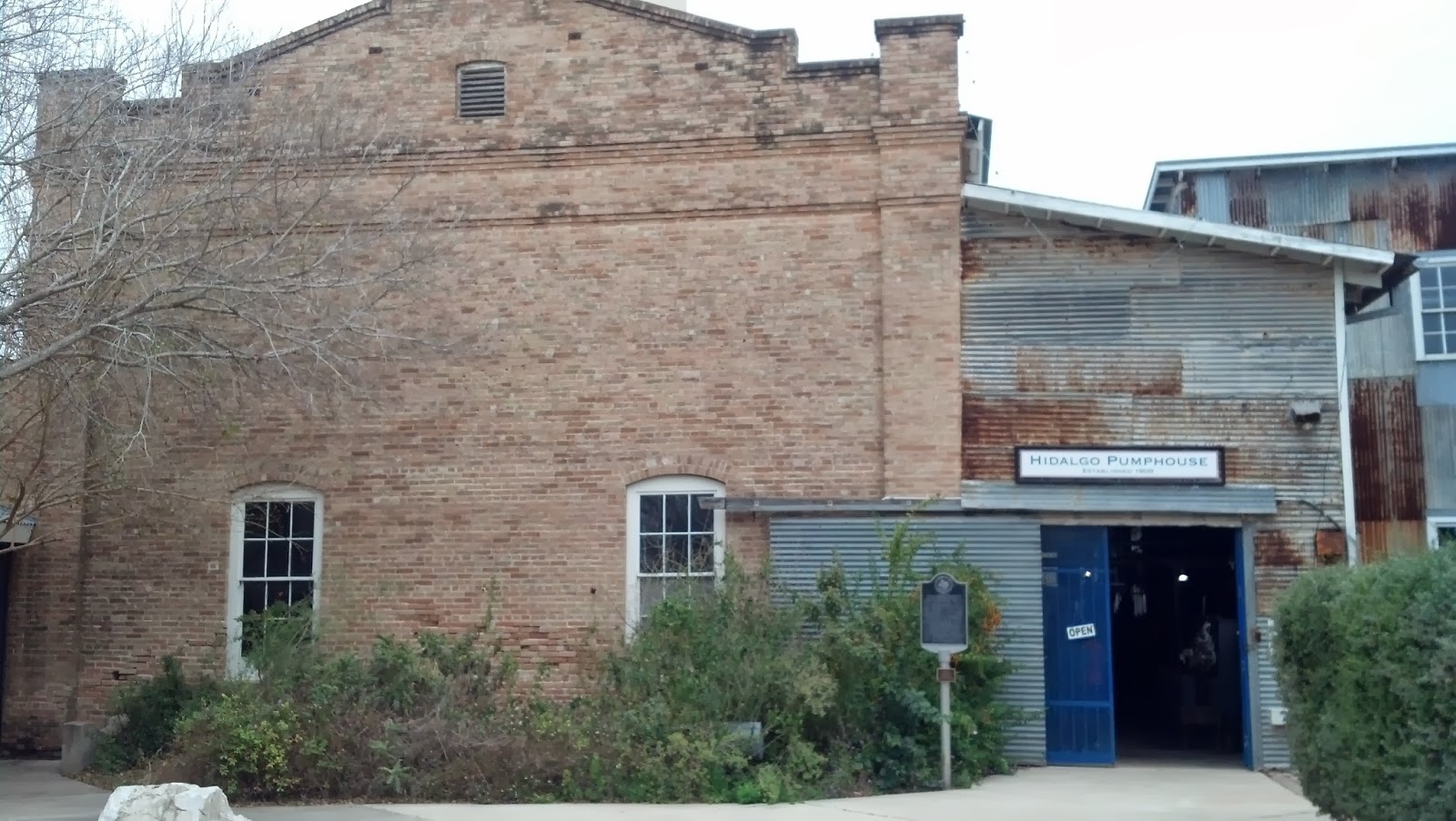 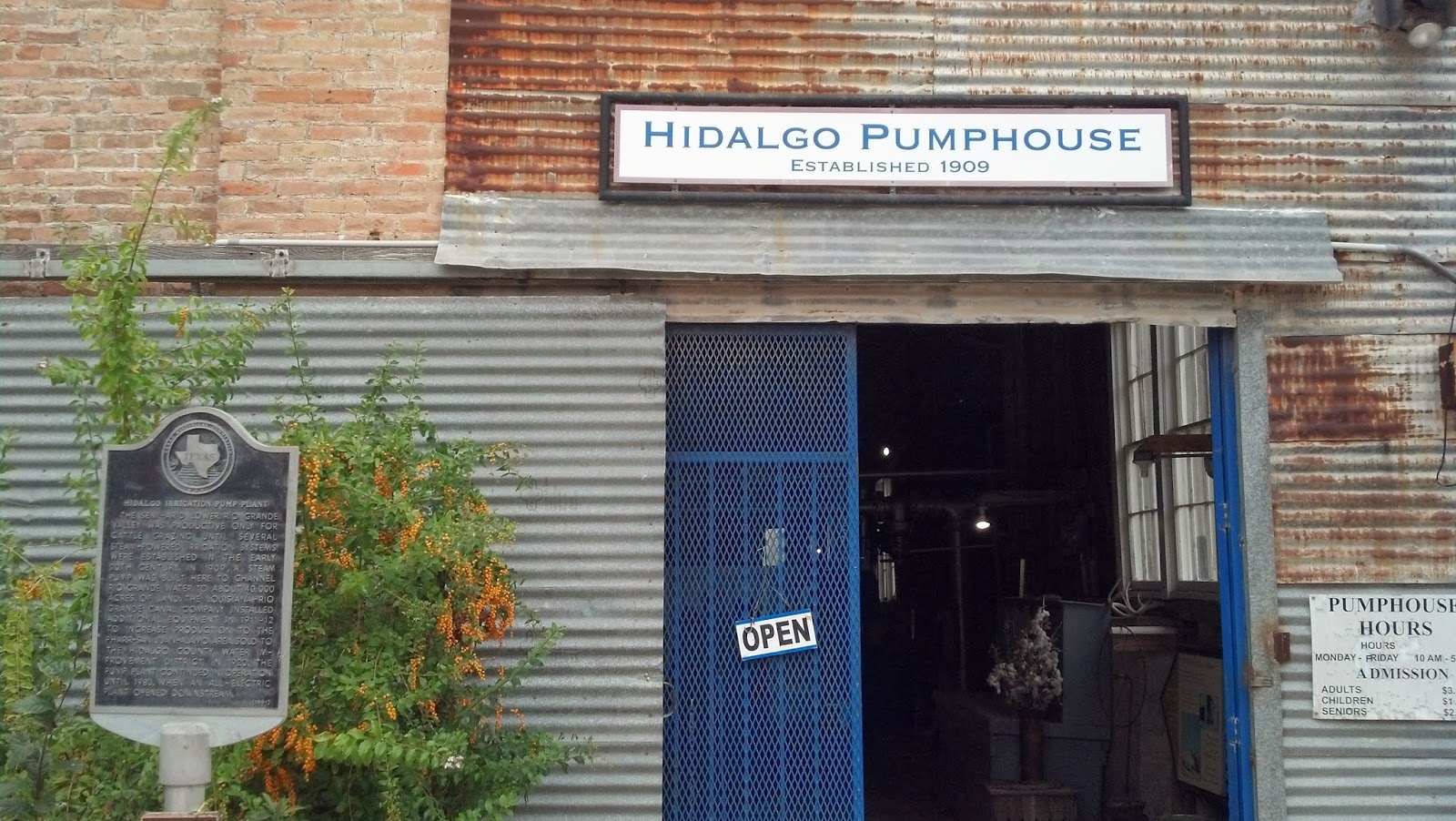 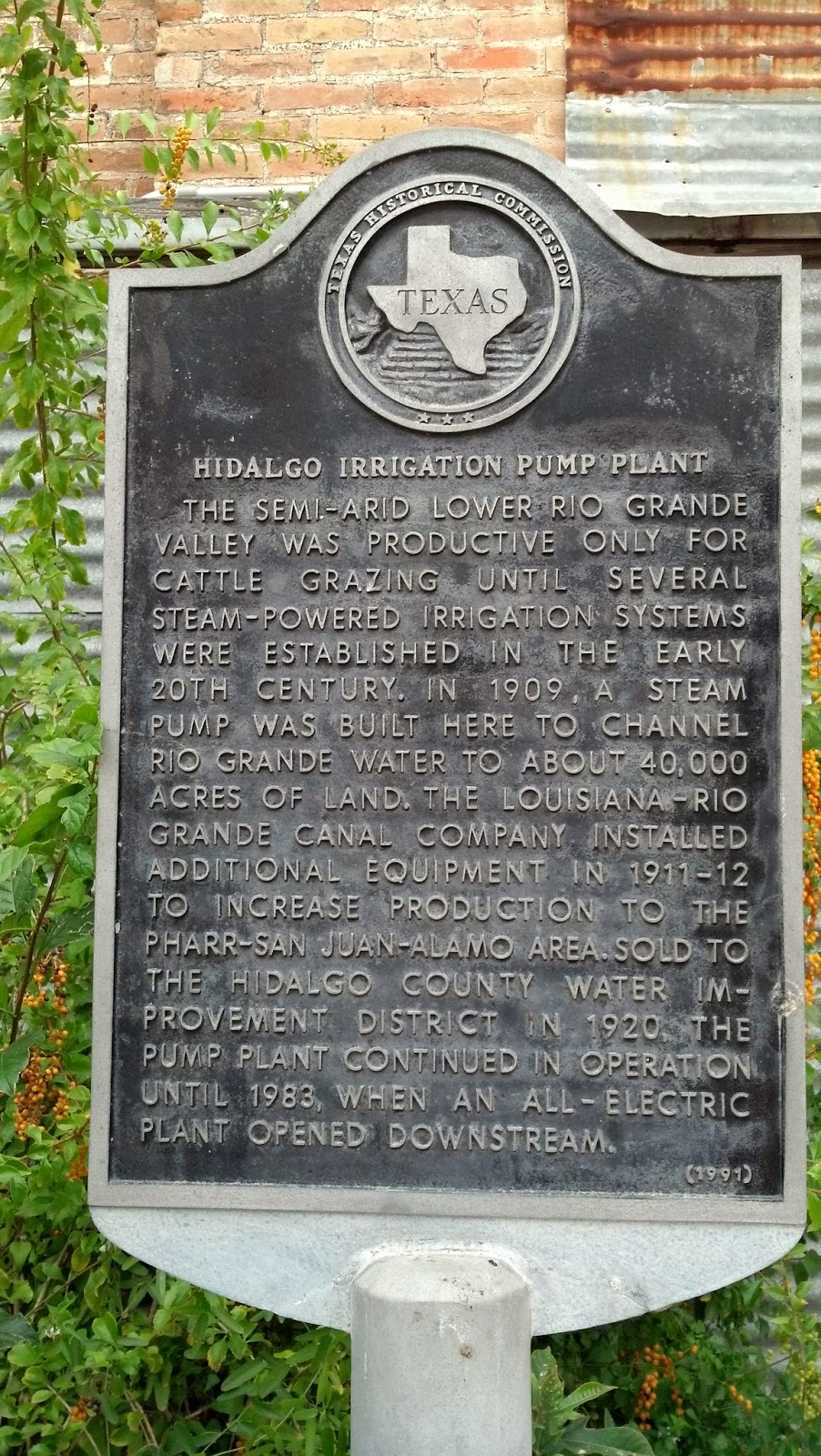 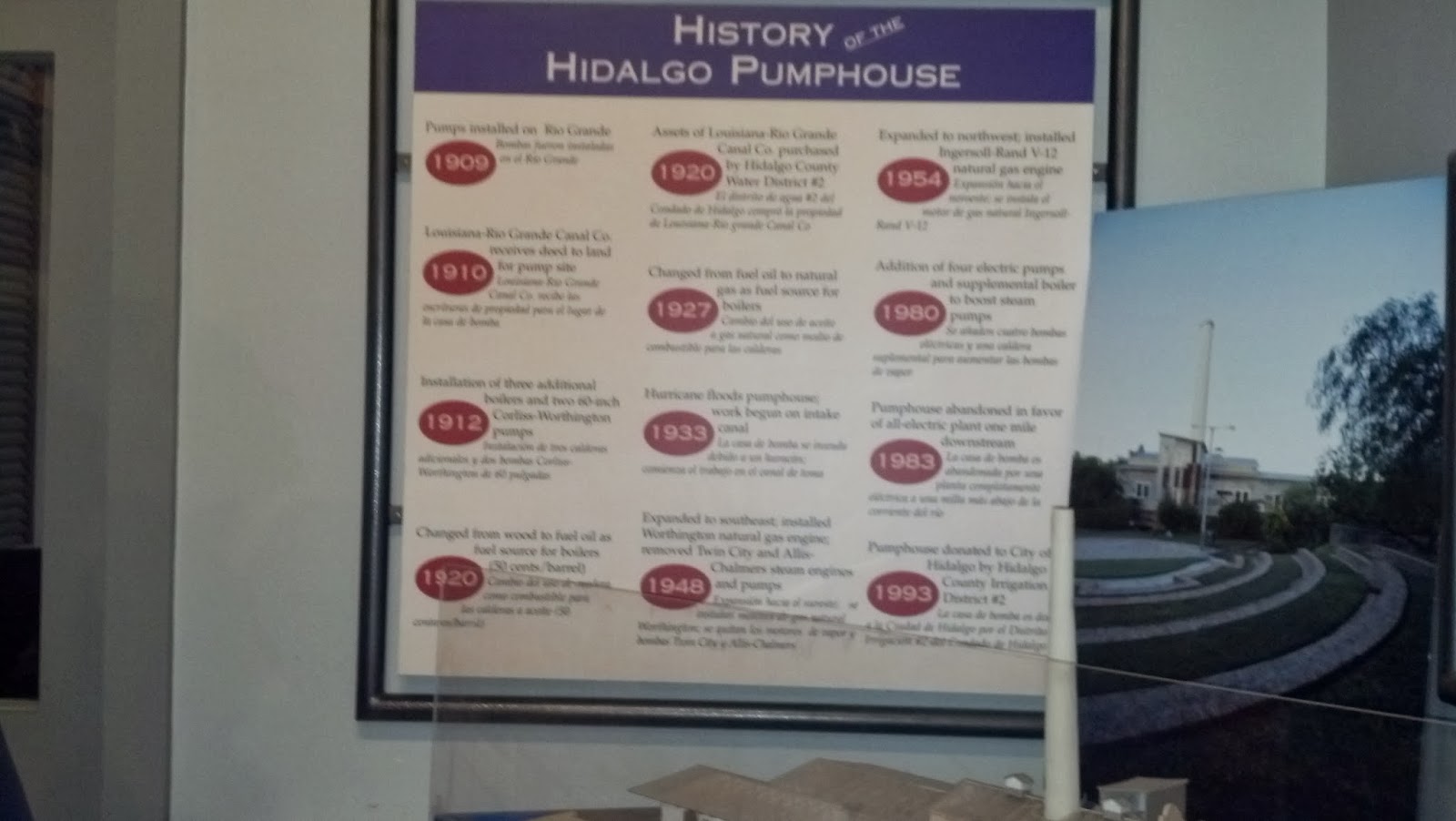 Good signage throughout the museum explaining how the process worked. 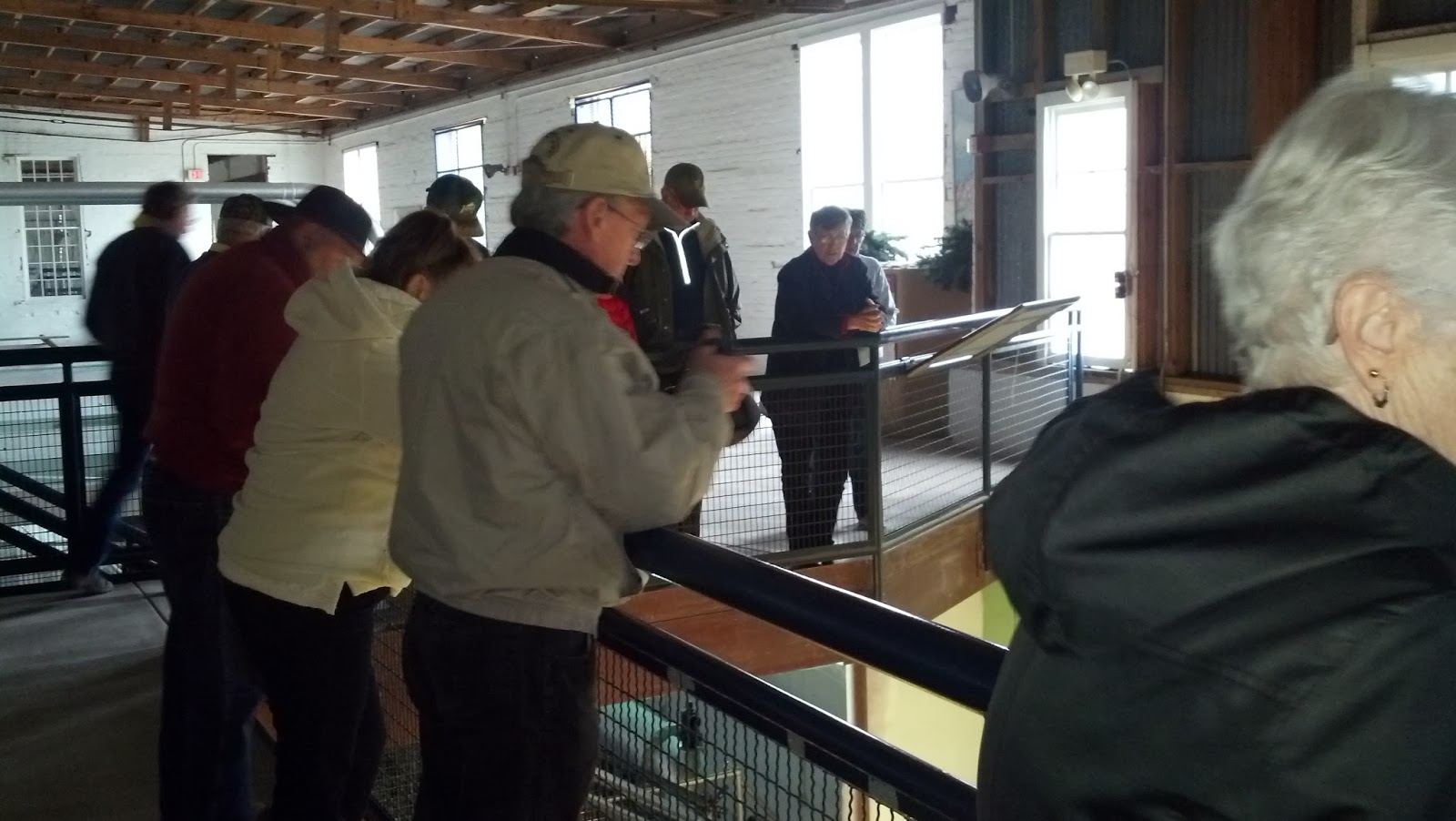 Avid listeners checking out the workings during Violas talk 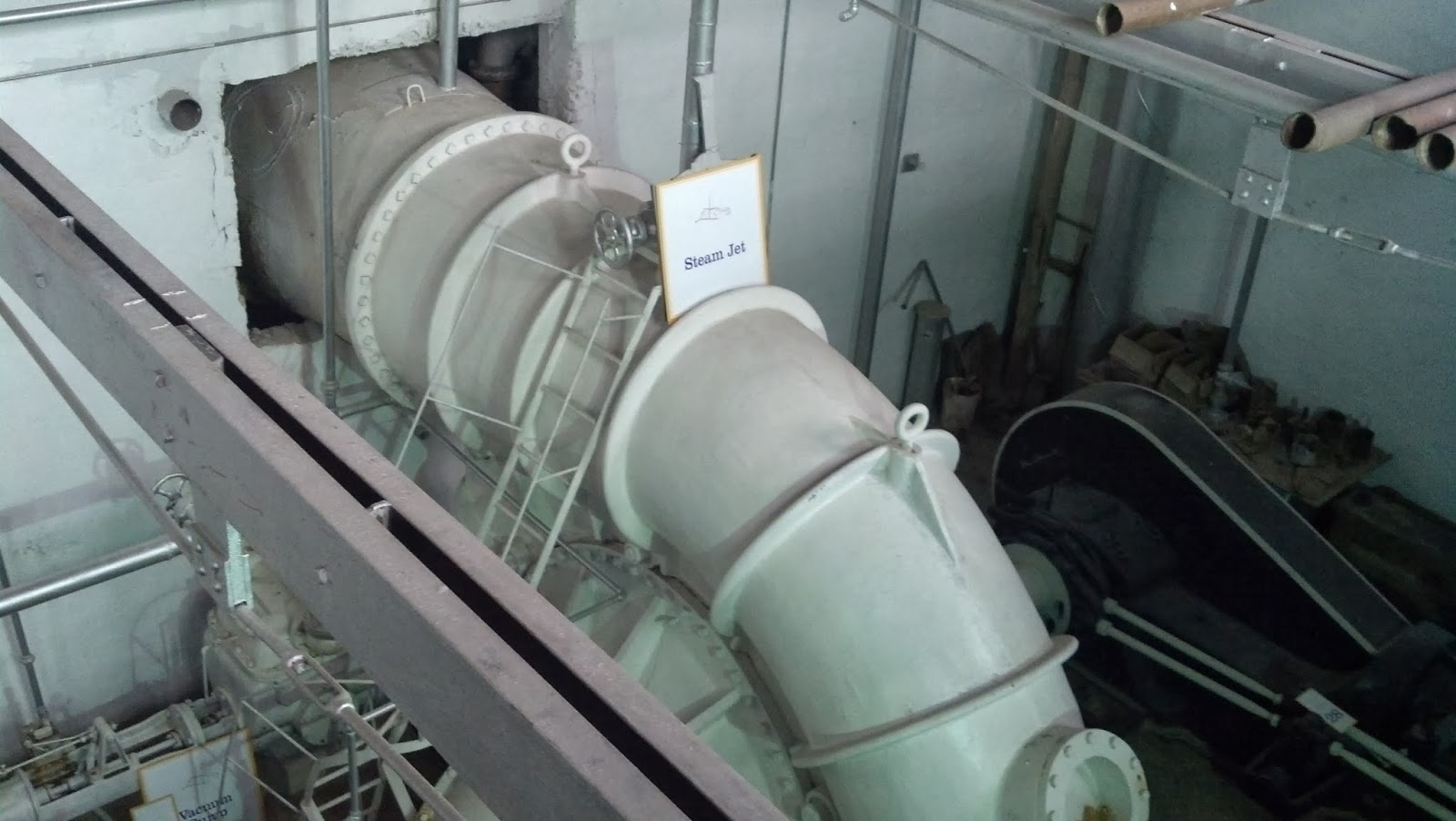 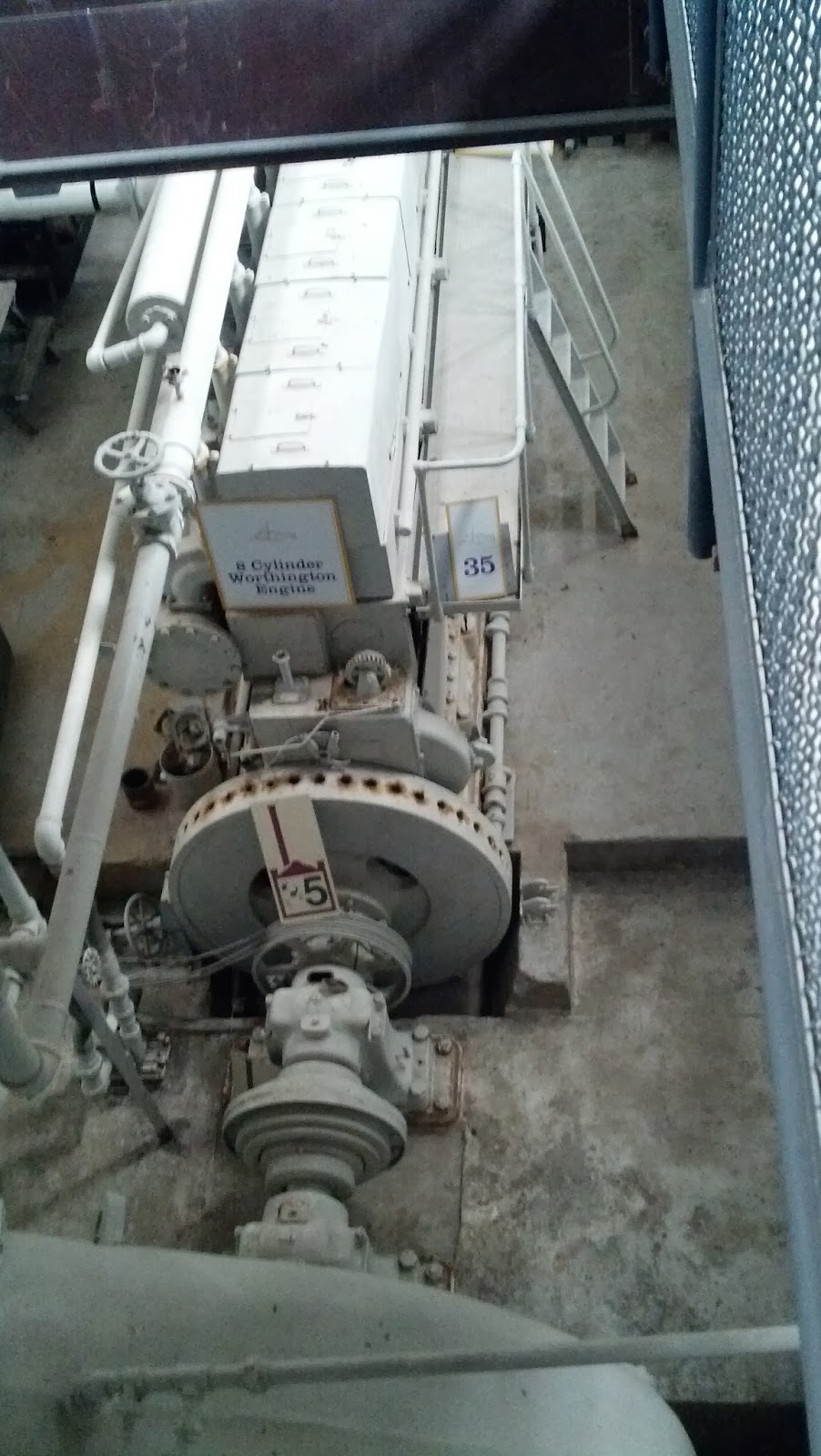 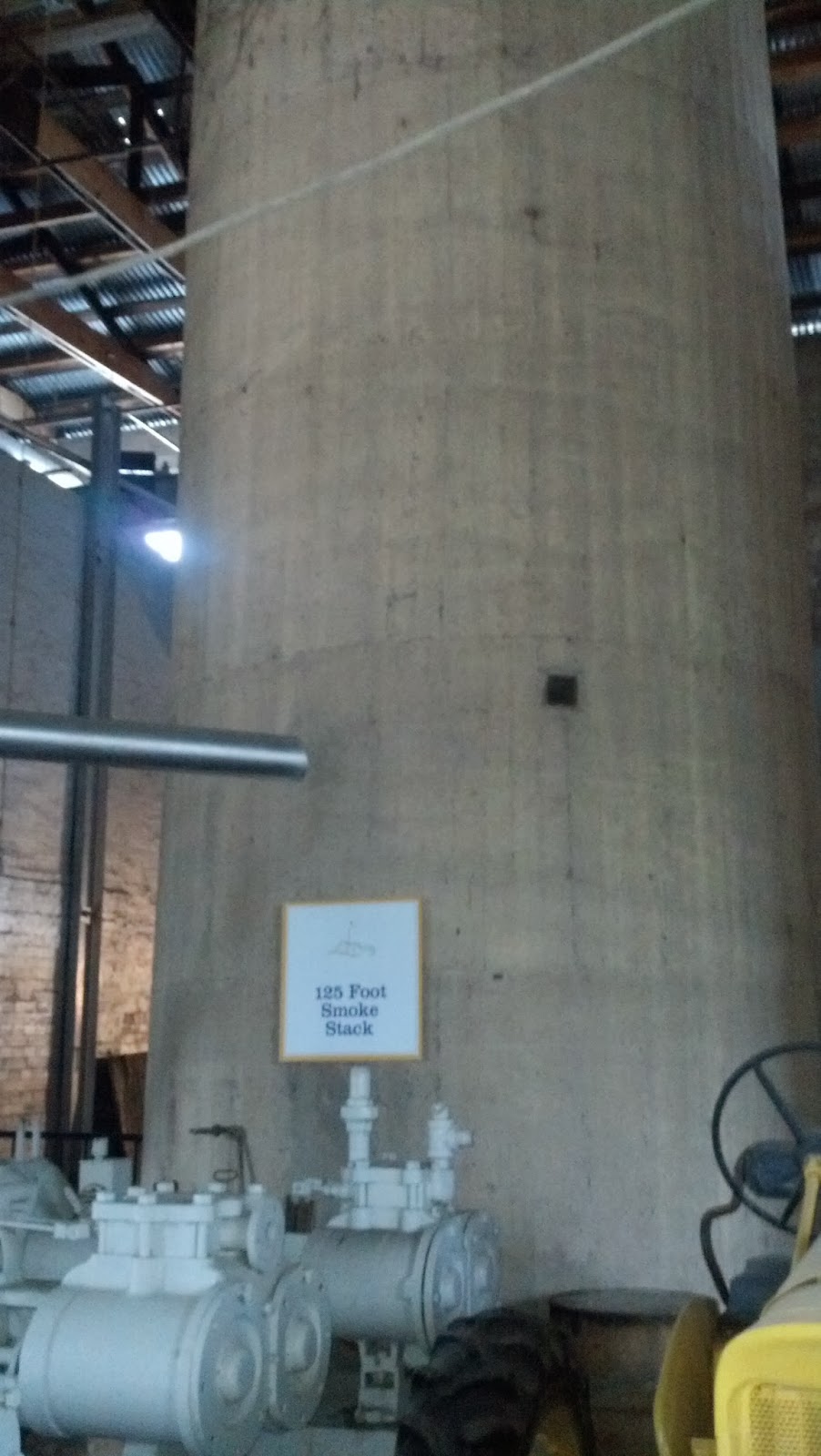 The remaining smoke stack.  Originally there were two. 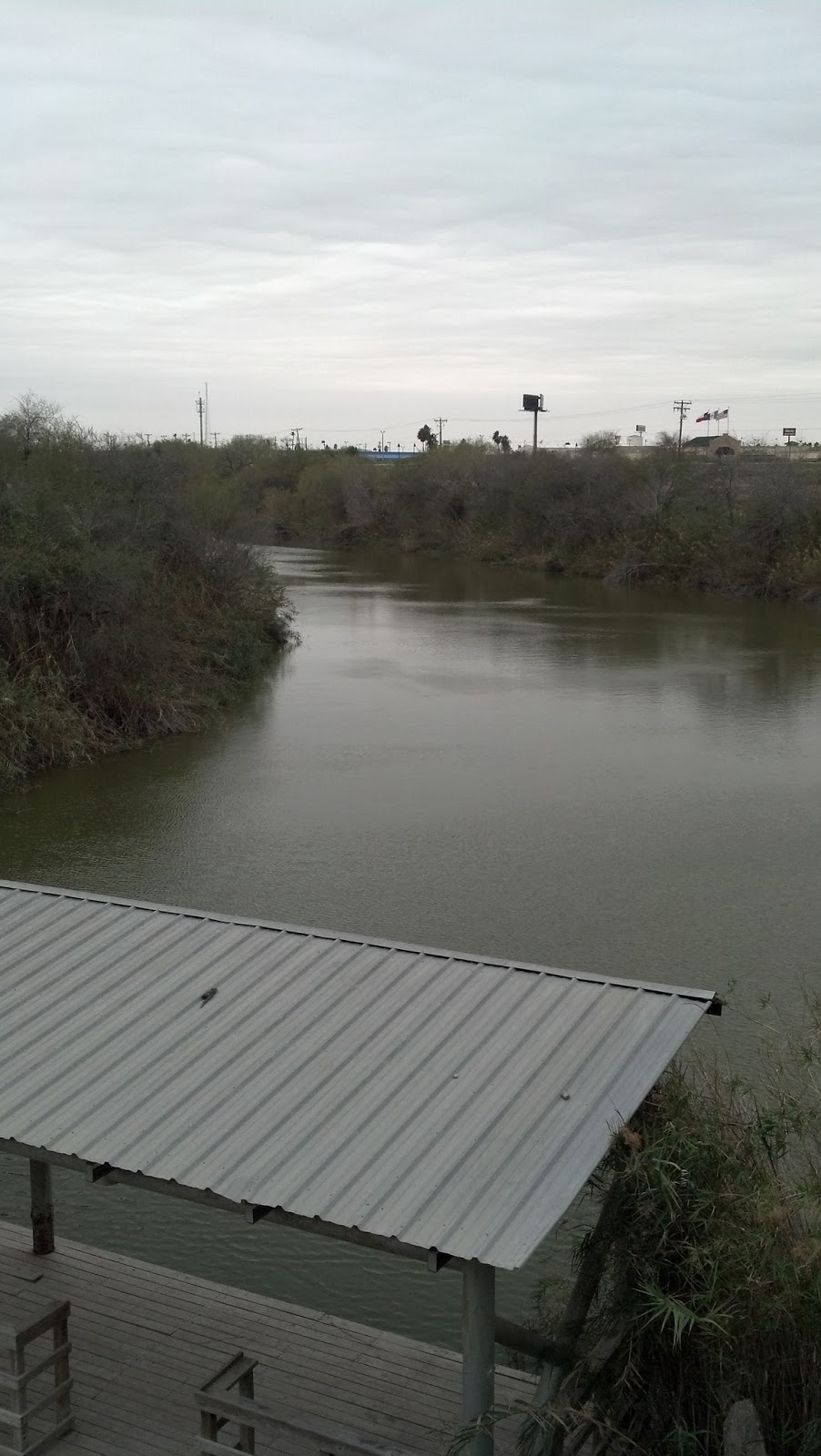 The canal that was dug from the river after the hurricane.