The night before arriving in Prince Rupert and the Pacific Ocean, we stopped in a town called Smithers. Here is another small town I would recommend if you ever have to move to British Columbia. The town is populated with overtly friendly folks, down town is a quaint village that includes coffee house, art galleries, performing arts venues, and a thriving diverse music scene. They boast the longest running music festival in Northern British Columbia, the Midsummer Music Festival.

This location is also a draw for fisherman. The fall is best known as the Steelhead season but four of the five species of Pacific salmon spawn in the Bulkey, and the Skeena Rivers that surround this area. The most imposing sight here is the Hudson Bay Mountain, which towers over this picturesque town and offers Alpine, cross-country, heli skiing and snomobiling. There are also two golf courses, one at each end of town 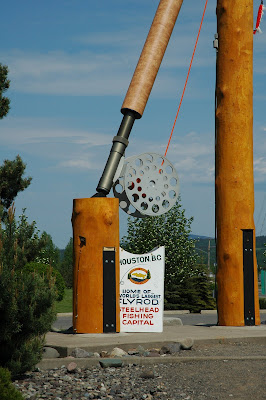 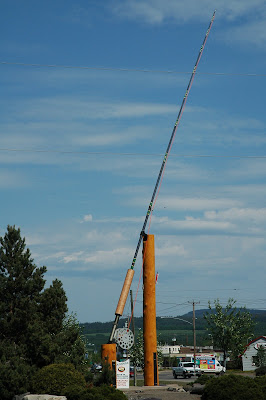 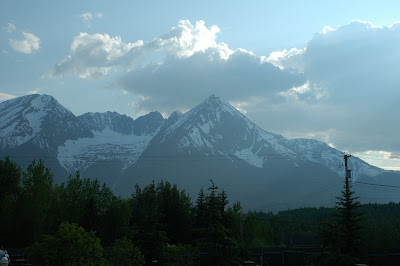 The campground we stayed at was called Glacier View and even though the glacier looks like it is shrinking, it dominates the view from any site in the park or the town.
Prince Rupert came into view on the afternoon of June 8th, Marlin’s birthday. It was celebrated with a wooden match stuck in a store bought oatmeal cookie. Pretty sad for the last birthday in his 60th decade. I keep telling him this trip is his birthday present, but he’s not buying it. Anyway, arriving here felt like the start of our adventure.
The campground we choose is only half a mile from the ferry terminal. We parked and were amazed to see a Maine plate on the camper next to us. Francis and Sharon Morrow, from Rockland, have a similar itinerary to ours, and in the last two days we have gotten to know them. We taught them Golf and they taught us Rummy. 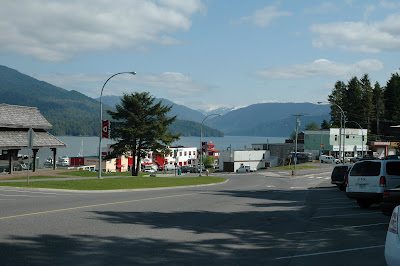 
Prince Rupert has a magnificent museum called the Museum of Northern British Columbia. The building, completed in 1998, is a striking post and beam, styled after a First Nations long house. The supporting cedar posts were an amazing size as were the planks used as cross supports. Since this is a temperate rain forest the cedar trees here reach immense diameter.

We were lucky enough to be at the museum for the 2:00 docent tour, given by a young Tsimshian man with solid background knowledge of the artifacts and the history of his people. The museum collection houses many tribal ceremonial carvings, bentwood cedar boxes, and robes dating from 150 to 200 years ago. Our guide explained that the Tsimshian people and other tribes have inhabited this area for over 5000 years. It was annoying to read in a AAA guide that “at the turn of the 20th century. . . the Grand Trunk Pacific Railway carried out its intention to build a port. . . on this rugged uninhabited island…” 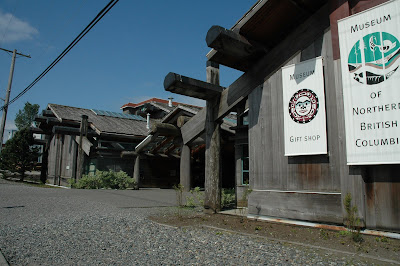 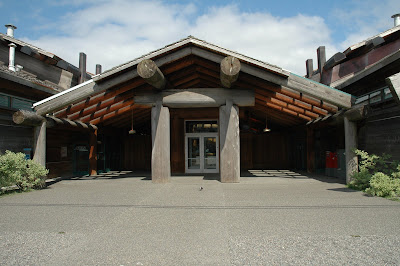 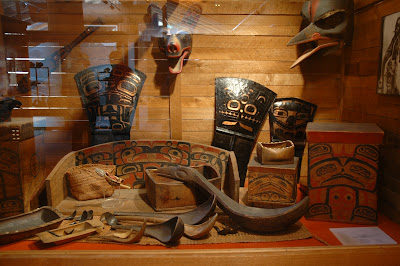 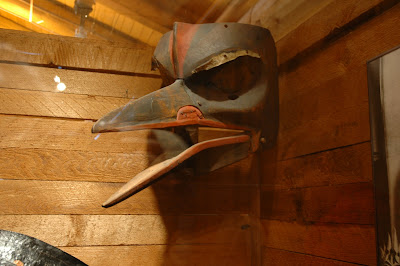 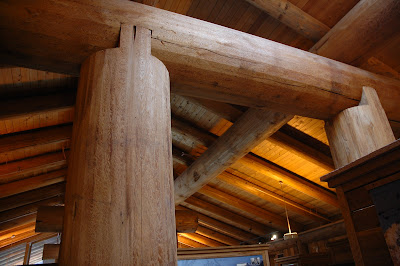 cedar support posts. The museum is built to resemble a Native Long House 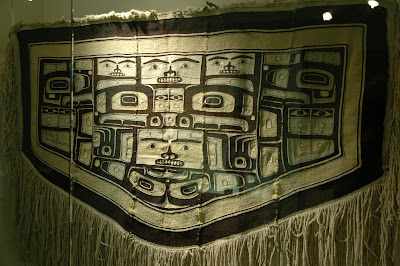 Ceremonial shall made of mountain goat hair braided with cedar bark 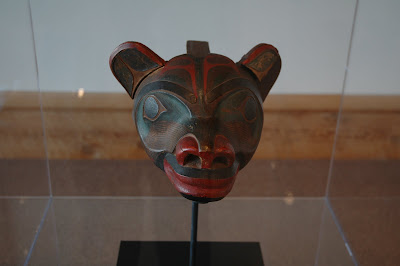 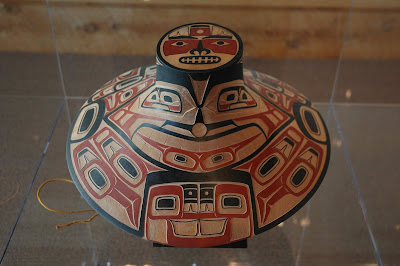 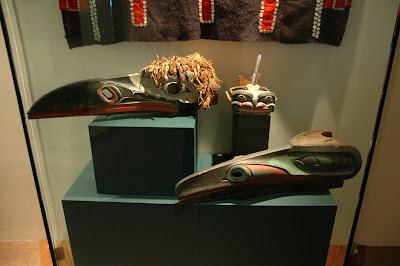 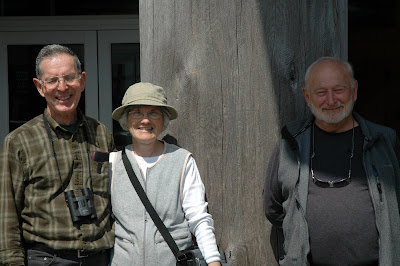 Francis and Sharon Morrow and Marlin in front of the museum 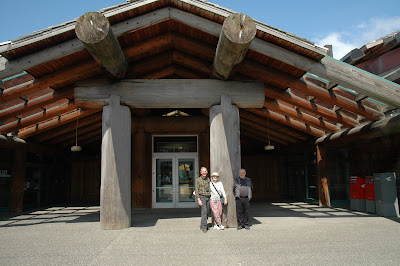 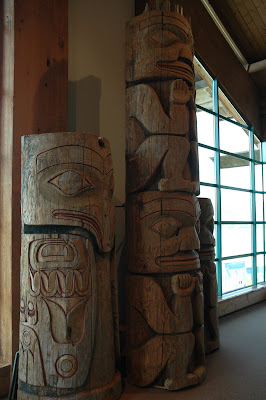 One of the many interesting processes explained here was the way the “bentwood” cedar boxes were created. These boxes were plentiful in this culture and were used for everything from storage, creating walls for private living spaces, storing ceremonial articles, to using them for cooking food. The process started with freeing the board from the log by hammering wedges into the log end, then using a stripping board to spread the opening the length of the log. This resulted in splitting the log in half. Then the width of the board was determined and the process repeated, resulting in a board.

The next step included carving a curf, or a groove, in three places at equal intervals across the width of the board. The three grooves were placed over a heated pit to steam, then when the wood was warm and wet, it was “bent” at those spots into a box shape, tied with roots and left to dry in that shape. When seams were treated with cedar pitch, they became waterproof and could be used for cooking or waterproof storage. The boxes were painted in bright colors with distinctive Pacific Indian cultural images.

Cedar was the mainstay of these First Nation tribes, just as the buffalo was for the Plains Indians. Cedar has an easily split straight grain which could be worked into boards for housing and carved into the totem poles used to signify a chief’s long house. The museum collection also includes intricate basket work woven from cedar root, clothing made from cedar bark, pounded till smooth and soft, cedar woven with goats wool for ceremonial robes and of course cedar canoes.

The last discussion with our guide was about the potlatch, a feast, given to celebrate a new long house, a marriage, or the raising of a new totem pole. These celebrations, attended by invitation, sometimes with as many as 400 to 600 people, were banned for a time by the Canadian Government. The reasoning is vague, perhaps religious or political, but the ban was lifted in the 1960s.

The next day, Tuesday, we checked into the ferry terminal, got or rig measured, and picked up our tickets. After three busy days in Prince Rupert, we were ready for our first jaunt on the ferry system. We thought we had to be at the terminal oat 4 AM on departure day, but since we checked in early, we didn't have to be there until 6 AM. Nice change. the ferry was wonderful. All the passengers were excited to be on their way, so we talked with many different folks while sitting in the forward lounge during the 9 hour journey. Meeting new people and constant fresh conversations made the time go by quickly. Our first stop is Ketchikan. We will be her for three days, camped next to a pristine mountain lake. Pictures next time.