On Sunday night, May 31, we arrived at Abraham Lincoln State Park in Mandan, North Dakota. This is a quiet, spacious park on the banks of the Heart River, just where it flows into the Missouri. We camped next to the river and visited with some women who were fishing from the boulders on the bank. They were catching Walleye and Drum, two fish we had never seen. Marlin’s fishing gear was rattling in the back of the truck, but we were not going to be in North Dakota long enough to justify a license.

This park is also the location of Fort Abraham Lincoln, the last posting of General George Custer. He left from here with his men to ride 500 miles west, where he fought the Battle of the Little Big Horn. Several buildings have been reconstructed from original plans. This includes Custer’s residence, which he personally altered from the intended military configuration.

The guided tour of the Custer home was presented in a “Living History” format, where the guide is dressed in period costume portraying a character from 1875. This means no discussion about anything after that year. Our guide was an Indian scout attached to Custer’s command. We learned, after the tour, that he was from the Sioux tribe and was researching another book about Custer. 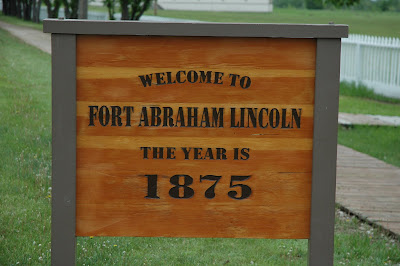 This house, which is now climate controlled, contains several pieces that belonged to the family, including a rocking chair that came from Mrs. Custer’s grandmother. After Custer’s defeat, his wife was ordered to leave the Post at once. She was also held responsible for his debt, which was more that $20,000. She got herself a job and managed to pay off the entire amount. Not bad for a woman who never been inside the kitchen before she became a widow.

According to our guide, Custer was either admired or detested by the other officers on the post. Because he spoke several native languages and was fearless in leading his men in battle, many Indians admired him. This contradictory figure, with an enormous ego, came from a poor family with 17 siblings and would have gone into the seminary if his army application had been denied. 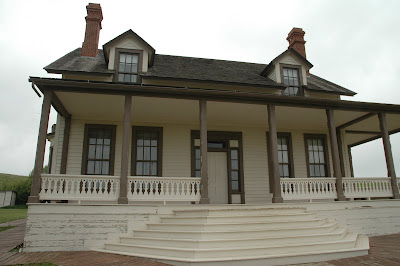 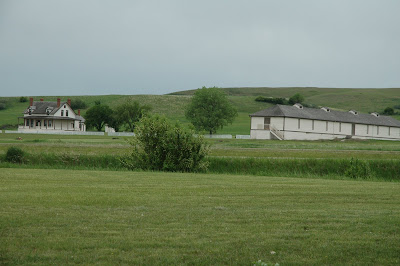 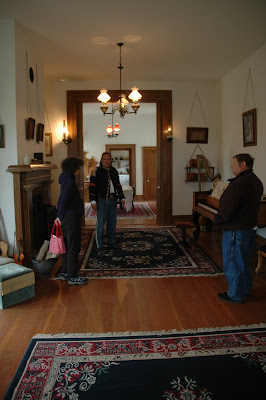 
Abraham Lincoln State Park also encompasses a recreated Mandan Village. The village is called “On A Slant”. Lewis and Clark came here in 1804 after it had already been abandoned for several years. Small Pox had drastically reduced this Mandan village as well as the Hidasta and Arikara tribes that made their homes along this section of the Missouri River. By the time Lewis and Clark arrived, what was left of these three tribes had already banded together and formed a village further north on the Knife River. 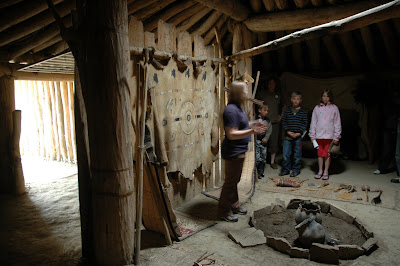 Inside a Mandan dwelling 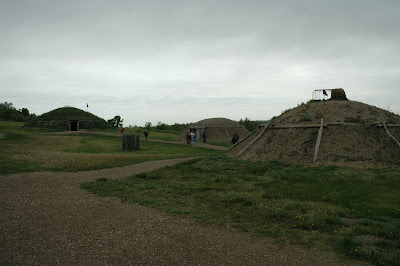 Part of the reconstructed village 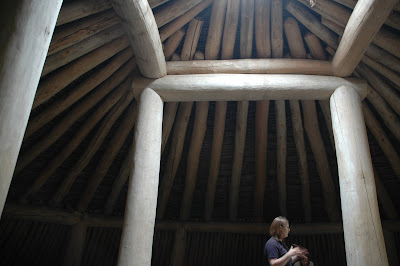 Inside the ceremonial lodge. This lodge was built by the
men for village gatherings
The Mandan were a farming culture. They grew corn, beans, sunflowers, and squash, which they traded for meat and other necessities. Their earth mound dwellings were owned and built by the women of the tribe. The men cut and peeled the cottonwood trees that are used for the framework, but the women constructed all the sidewalls, roofing and outer mud coating. Go Girls. This village had been occupied since the early 1500 before small pox came to this land. 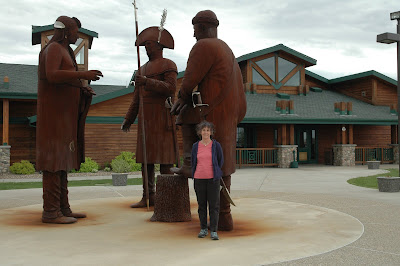 This steel sculpture is outside the Lewis & Clark Interpretive
center. It was created by a local welding artist. 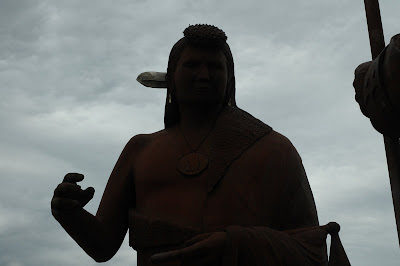 Our first visit here exposed us to the painting of Karl Bodmer, who traveled throughout the area in 1832 with Prince Maximilian from Germany. Maximilian was making a scientific journey to document flora and fauna. He hired Bodmer to accurately record what they saw. Bodmer’s depiction of the native life gave an accurate look at this culture at a time when it was declining. His paintings capture, in muted color, the smallest detail of robes, feathers, jewelry, tattooing, weaponry, and anything else he observed.

This visit rewarded us with a full exhibition of 81 Bodmer prints that were made from the original plates used for the publication of Maximilian’s 1839 book about his travels in America. If you are interested, here is one of many websites where his images can be seen.
www.oldprintshop.com/cgi-bin/gallery.pl?action=browse&creator_id=1615 - 24k Or you can just google Karl Bodmer.
Yesterday was a day for housekeeping, laundry, groceries, post office, etc. We found an early campsite located on a grassy hill next to a lazy stream and fooled with the internet most of the afternoon. This morning, I will post this blog, finish the dishes and head for Canada. Our next stop should be Edmonton, where it is rumored have the largest mall in the world, complete with a roller coaster and a beach with real water and waves! Can't wait to see that.