Not knowing what to expect, we arrived at the Prince Rupert ferry terminal around 5:30, along with our campground neighbors Dave, Sharon and Francis. The waiting line was short and customs was very informal, so we were loaded onto the boat by 6:30. Our ferry, the Taku, is one of the smaller vessels in the Alaska Marine Highway fleet, but it was much more elaborate than what we see for ferries transporting passengers to the islands in Maine. 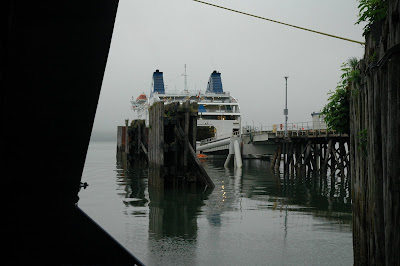 The boat was not as large as a cruise ship, however, with 4 decks, a forward lounge, a reclining lounge, and a solarium, it was substantial. We choose to sit in the forward lounge for the best, and warmest, view. All the folks around us were very excited to be on the move. Most, like us, were doing the tourist hop on and off routine, but there were a couple of passengers who lived in Ketchikan and shared some insider info with us. 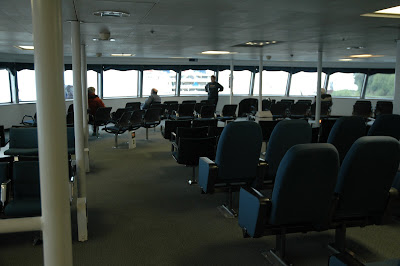 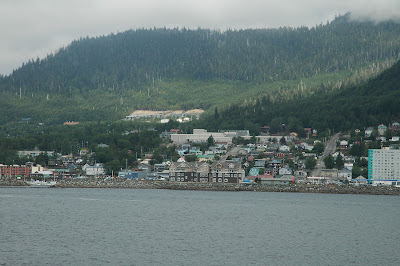 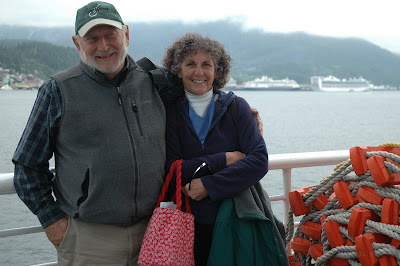 Watching the docking process before we departed for the city

The six-hour trip went by quickly with all the conversation, visiting, and napping. Off the boat, our first stop was Safeway to stock up, then off to the campground. We checked out the commercial campground first, but it was not very appealing, so we backtracked to the closest Forest Service campground. The Tongas National Forrest encompasses 90 percent of Southeastern Alaska, 17 million acres, and just here in Ketchikan there are four separate campgrounds. The one we choose was on Ward pond and we were lucky enough to get a site next to the stream that flowed out into the pond. Marlin got a chance to throw a line during the evening rise.

Ketchikan is noted for having an average of 278 days of rain each year so we were pleased and surprised by three days of sun. The first evening we set up our screen tent and invited our Prince Rupert neighbors for belated Birthday cake for Marlin 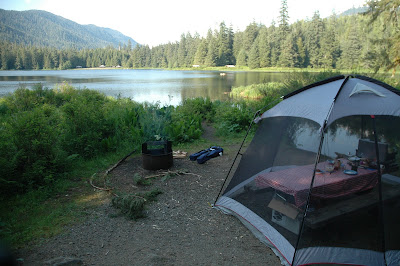 Our site at Ward Pond 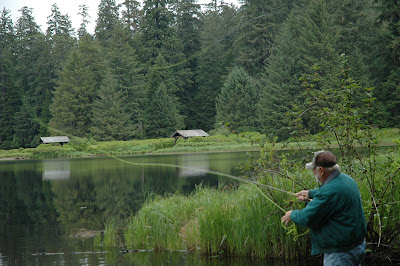 
Ketchikan is a major center for totem poles, which translates into way too many totem pictures. However, the diversity and artistry in each new pole is fascinating. Apparently, it is difficult to know the true meaning of each individual pole, unless you know the story of why it was made. Poles were created to commemorate special events, such as a new long house or clan house, a marriage, a death, or even a “shame” pole for bad deeds like adultery or owing a debt. With the passage of time the meaning of many older poles has been forever lost.

The poles are carved from enormous cedar trees. This wood is resistant to rot, however, after about 50 years the original totem poles began to wear away and eventually they were left to fall down. Today, copies of the older worn poles are commissioned, giving the old stories a new and extended life. 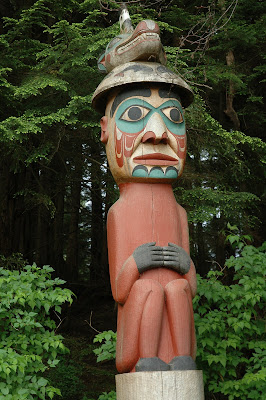 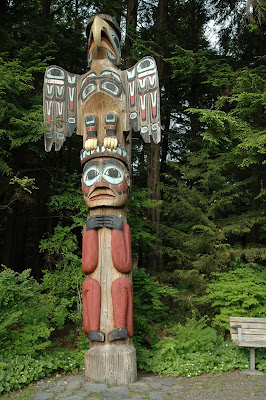 Our campground host told us about a performance of native dancers on Friday night. The event was held at “Totem Bight”. This is a small self guided museum/park that houses multiple totem poles and a replica clan house that was build by the CCC in 1939. We were perplexed about the name Totem Bight but when we arrived there was information posted explaining that a “bight” is a shallow cove in the coastline that appears like a bite taken out of the land by some mythical creature.
The group of local people, who are of Native decent, come to Totem Bight once a month and perform in authentic costumes, songs and dances from their culture. A smaller group than usual was available for this performance because many members were under the weather with the flu. Introductions by each dancer included citing their maternal clan, who made their blanket and hat, and what family member was in the audience to support them. The group ranged from elder great grandmothers and fathers, down to a 3 year old great granddaughter. There were 8 or 9 boys between the ages of 5 and 15 who showed great enthusiasm and concentration during the dancing. 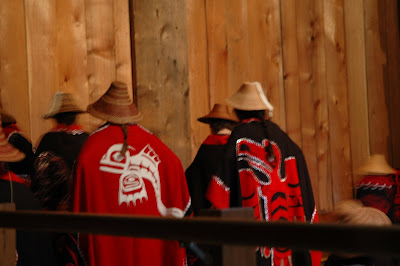 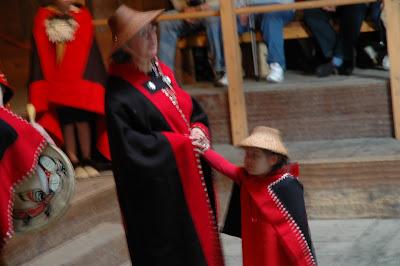 The oldest and youngest dancers 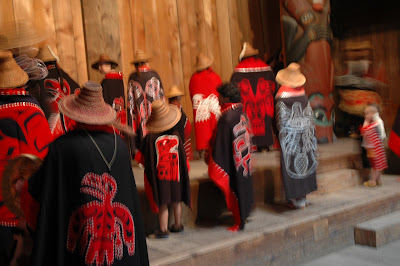 The robes are wool with designs made with buttons or paint 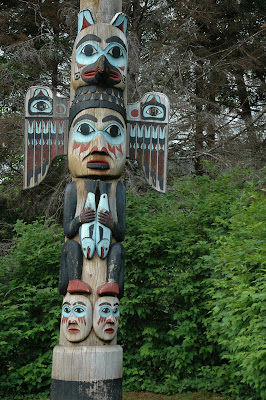 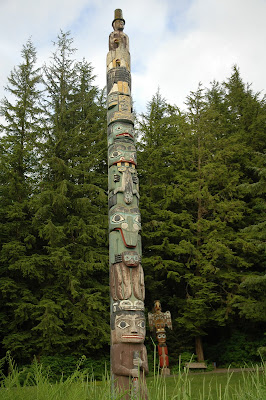 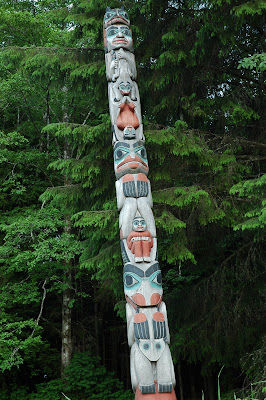 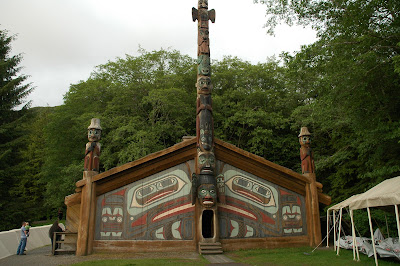 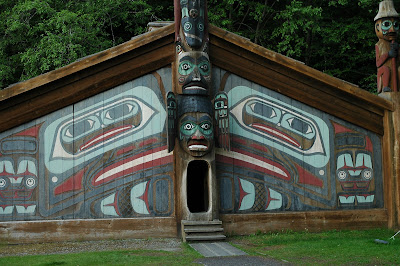 Clan House at Totem Bight. The entry is through the bottom of the totem

The city of Ketchikan hangs between the mountains and the sea. In fact part of downtown is on pilings that hold up the street and dock, so the town is long and skinny. Right off the cruse ship dock is Creek Street, a boardwalk extending along a rushing stream that flows into the ocean. Hundreds of shops, as well as thousands of visitors off the docked boats, fill the area once occupied by the red light district in an era long gone. Scattered among most of the cruse line owned businesses are a few independently owned galleries where local artists exhibit native paintings and carvings. One artist, Norman Jackson, was completing the carving on a mask when I went into his studio. I recognized his name from the many pieces I had seen in museums and on totems throughout the city.

Behind Creek Street a switch back of stairs leads to the higher level of the city, where a salmon fish hatchery, a totem museum, a luxury hotel, a city park, the civic center, and local homes are located. There is a “Funicular”, or gondola like tram, that rises from the creek level to the hotel if the climb is too daunting. We rode it for fun, and completely forgot to take a picture. The single car can hold 20 people, but with 12 it was quite crowded enough for me. As the car ascends the narrow track, you are able to see the huge cement block counter weight as it descends. Would have made a great picture 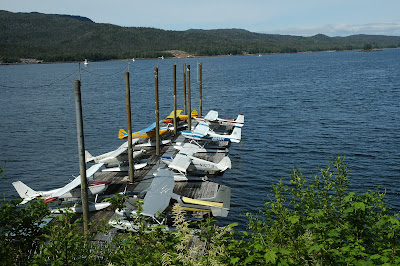 This was the municipal dock for planes. It is the way most travel between islands is done. 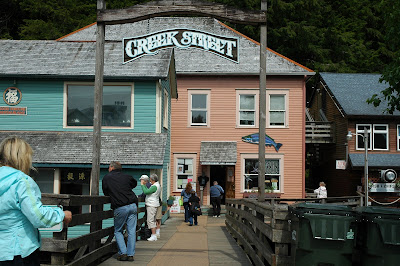 The Southeast Alaska Discovery Center, located in a new building at the edge of the hustle and bustle, has exceptional exhibits on the flora, fauna, industry and people of the State. The lobby of the building is dominated by three totem poles that were carved by local artists. The center’s introductory film encourages safety and respect for the animals you encounter.

Our last venue in Ketchikan was the Saxman Totem museum. Again, lots of old and new totems and a carving shed where work is currently in progress on several pieces. Unfortunately, we were there on Saturday and although you could look in the multiple windows, no one was inside. This site also has a large collection of standing totems and a clan house. We were disappointed that our timing was off so that we missed the narrated tour explaining each artifact as well as seeing the carvers creating a new piece from scratch. 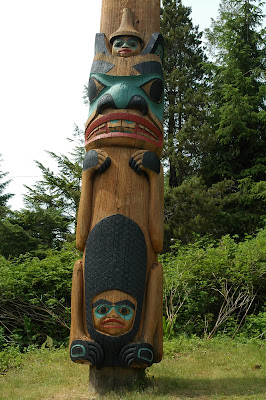 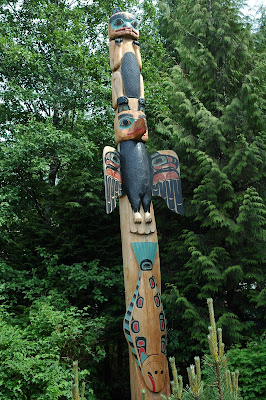 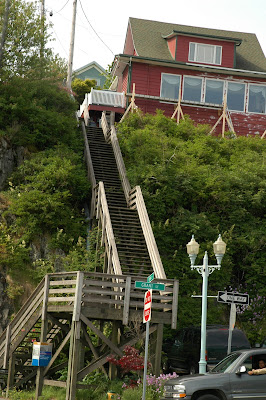 How would you like to come home to this walk way every night? Lots of entry ways are by stairs like this.
Departure to Petersburg was scheduled for Sunday at 1:30. We thought we could get in a hike to a waterfall that morning, but our time evaporated and all we managed was a look at the trailhead. The trail began at the honest to god end of the road, the end of the only road in Ketchikan. 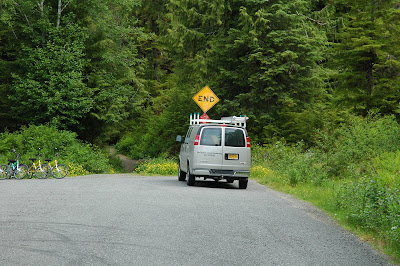