With two long driving days we arrived in Moline, IL for a quick visit with Uncles and Cousins and, of course, to eat as many Maid Rites as possible. We rolled into town about 9 PM Wednesday, visited as many relatives as we could on Thursday, the departed on Friday morning, after breakfast with two more Uncles. 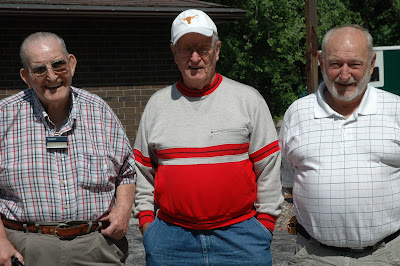 
Later that day, at a pit stop parking lot, there was a truck carrying a single propeller for a windmill. The size was amazing so I had to snap a few pictures and talk to the driver. His load was 120 feet long and required a second driver at the rear end to manuver corners. This windmill part was manufactured in North Dakota and headed for Illinois. The towers are transported in three separate pieces. When we got back on the highway, we saw four more of the blades headed east. 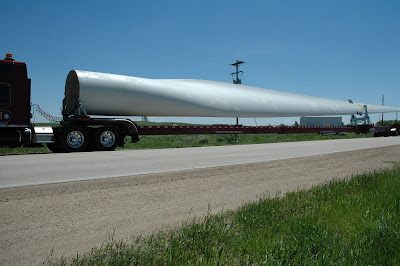 A short driving day brought us to the town of Clear Lake, in north central Iowa. In 2007 an overnight stopover turned into four days of falling in love with this lakeside town along with its neighbor, Mason City. (see the old blog entry for July 31 thru August 4, 2007) We could have done a repeat and stayed again for four days or longer but we need to keep on a reasonable schedule to reach Prince Rupert on time for our ferry reservation.
August

Our visit was limited to a quick downtown stop for morning coffee at The Cabin, and an equally quick run in to the Surf Ballroom gift shop to get posters for a friend. Last time here, we mailed our friend a replica poster of the famous Buddy Holly, Big Bopper, Ritchie Valens show, performed the night before their plane crashed. However, he only got the mailing tube, minus the poster. We thought we’d try again since he is an avid collector. 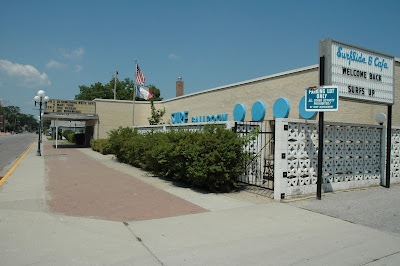 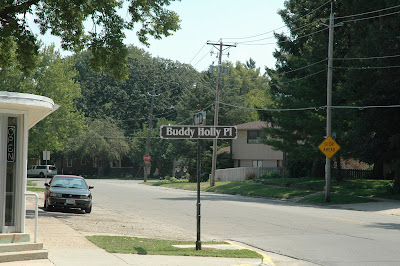 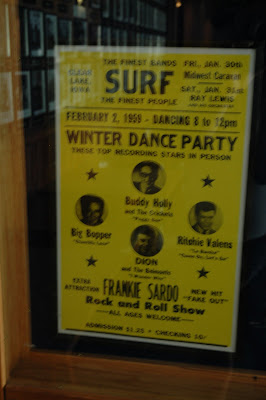 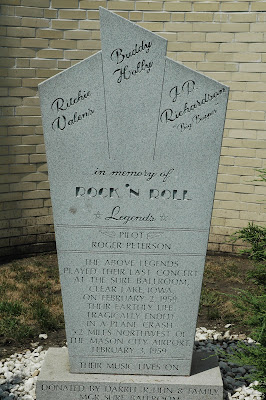 Saturday we trudged north, through Minneapolis, Minnesota, where they are doing their version of Boston’s Big Dig, complete with poorly posted detours and traffic jams. Since it was Saturday, we wanted to stop and get tickets to Prairie Home Companion, but unfortunately, Garrison Keillor was performing in Saint Louis this week, so we missed our chance. Minneapolis does look like a fascinating city though, and perhaps it should be added to our list of places to investigate, (after they finish the road construction).


Camping in Sauk Centre, Minnesota, at the Sinclair Lewis Campground, we did some walking on the 28 mile Lake Wobegon Trail. This is a hiking/biking/walking trail, named after Keillor’s imaginary town. The section we traveled had rest rooms, a snack stand, a picnic pavilion, playground equipment, and many fishing docks along the southern end of Sauk lake. An impressive bike trail.
Sauk Centre is the boyhood home of Sinclair Lewis. The City operates a Sinclair Lewis Interpretive Center where we spent the next morning. The exhibits chronicle Lewis’ life in this town up through High School, and his achievements after leaving here for college. Sauk Centre is supposedly the inspiration for Lewis’ Nobel Prize winning novel “Main Street”, published in 1920. He was the first American to receive the prize but his depiction of small town life was very controversial. The Town’s people vacillated between despising him and calling him a local hero.

One of the most interesting displays described the method the author used to construct his novels. He kept lists of names, found in cemeteries and phone books, that he used for future characters. Copies of his original notes detailed how he produced at least three editions of a story before final editing. All this was done by hand or on a manual typewriter. No wonder there are so many more books published these days. Think how easy it is to edit with a computer compared to the good old manual typewriter. 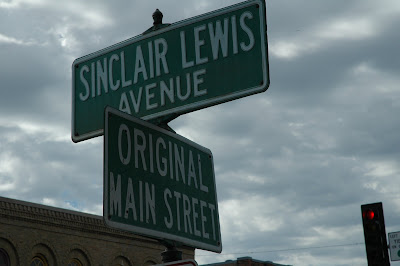 Today this town is indeed proud of Mr. Lewis's novel 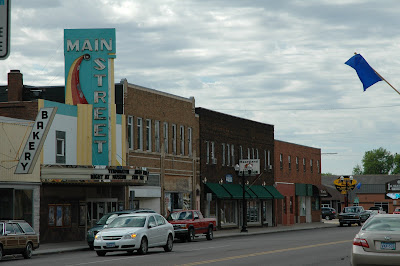