Our journey to Petersburg was on the ferry Columbia. This was an even larger vessel than the Taku. On this ship there was a full bar area with an extensive lounge, a formal dining room complete with white linen tablecloths, two decks of cabins, the front seating area, as well as the solarium.

Unlike the Taku, that makes shorter trips back and forth, the Columbia traveled all the way from Bellingham Washington to Skagway, so in addition to two decks of cabins, the solarium was crowded with folks with sleeping bags on deck chairs, dozens of tents, and even some blow up matrices on the floor of the covered section. The trip from Prince Rupert to Skagway is at least 30 hours with an additional 36 hours if you start in Bellingham Washington. Sleeping in the Solarium omits the need to pay $86 a night for a cabin.

A Forest Service Naturalist was on board to give periodic talks about the Tongass National Forest attractions, glaciers, hiking trails in Petersburg and Juneau, and a "show and tell" of plants found in the muskeg. The area that is locally called a muskeg is what we would call a peat bog, with sometimes 20 feet of ancient peat, stunted trees, mosses, and other plant life similar to bogs in the east. The naturalist had some skunk cabbage leaves that barely resembled eastern skunk cabbage because they were 4 feet high. They grow them big here in Alaska. 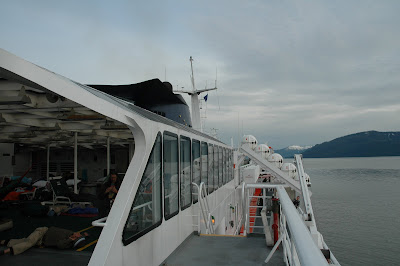 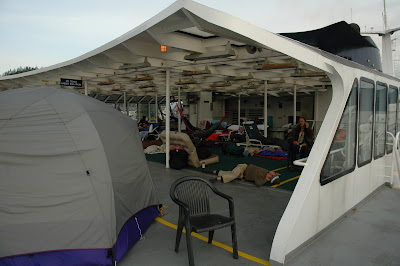 The ferry trip to Petersburg goes through the Wrangall Narrows. This is a waterway between islands that is only 150 feet wide at one point. The ferry we were on was 85 feet wide. Not much room to spare. This shipping lane is indeed narrow, but it is also shaped like a multi curving snake. It is nicknamed Christmas Tree Lane because of the red and green blinking buoys that weave back and forth and are placed so close together. It was interesting to watch this huge ship maneuver through the maze.
None of the cruise ships are able to come through these narrows, so only the small ships can make it to Petersburg. The town actually voted against dredging the shipping lanes, thus keeping the town off the big ships port of call. 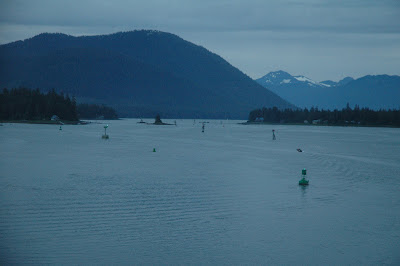 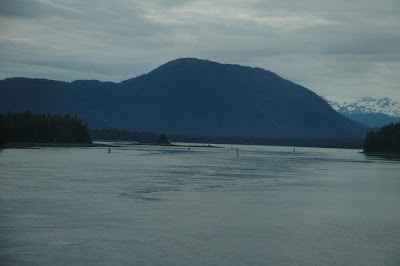 Petersburg is called “The Town that Fish Built”. Even though the island population is just over 3,000, they claim to have the largest, most prosperous, fishing fleet in Alaska. The modern fishing industry here was begun around 1900 by a Norwegian man named Peter Buschmann, when he recognized that the dense blue glacier ice from the near by LeConte Glacier could be used to pack fresh caught fish. Today, many residents can trace their heritage back to the Norwegian ancestors who followed Peter here for jobs in the new fishing industry. 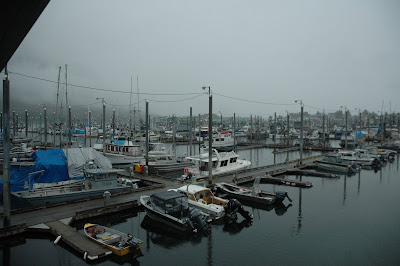 The town still reflects this Norwegian influence today. Many of the houses are painted with rosemaling, a Norwegian style of painted flowers similar to Tole painting. The Sons of Norway Hall, built in 1912, displays shutters painted in the same style, and Petersburg holds an annual festival in May to celebrate Norwegian Independence Day. 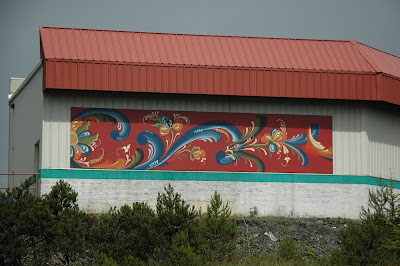 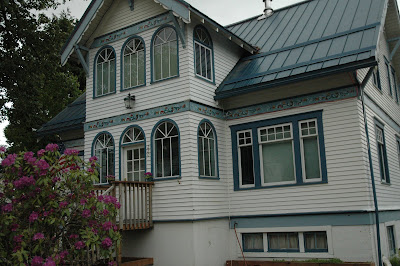 Rosemailing on a local residence 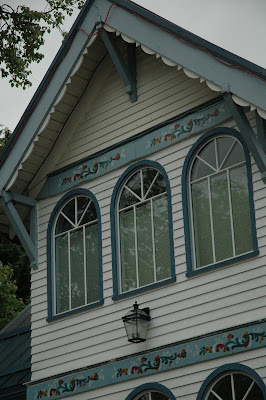 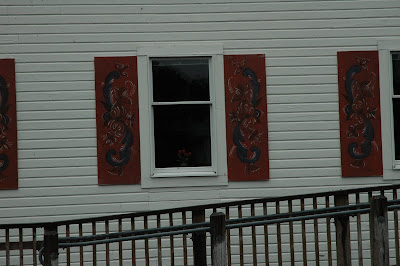 "The Sons of Norway" hall built in 1912 and still in use today, with rosemailing shutters 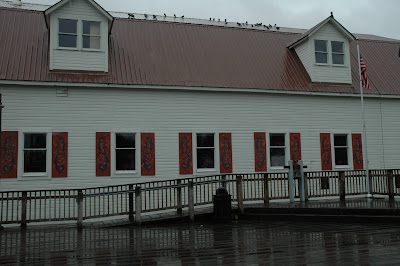 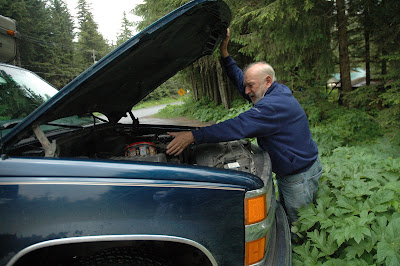 Marlin is heating our lunch on the engine. This is an old technique he reconstructed from his past!


The city of Petersburg, and most of the population, is contained at the northern end of the twenty-three mile long Mitcof Island. The southern section of the island is mostly muskeg or bog. There is a great half-mile boardwalk through some of this peat bog, out to Blind River Rapids. It is said to be a favorite fishing spot but the only fisherman we saw said they were not biting that day. It was worth the walk anyway.

The next day we headed for Three Lakes Loop Trail. A well maintained dirt road took us along five miles of moss covered trees and acres of brilliant wild flowers. The drive alone was worth the effort but the half-mile boardwalk through marshes and muskeg was even more beautiful.
The three lakes on the Three Lakes Trail are called Sand, Hill, and Crane! We stopped and fished at Crane. Marlin got a fish on his first cast right from the dock. The forest service provides a boat for any hiker to use, so we paddled around for a couple of hours. No fish. Back at the dock, Mr. Cook hooked another one. Go figure. It was a perfect day and a picture perfect location for splashing around in the water anyway. 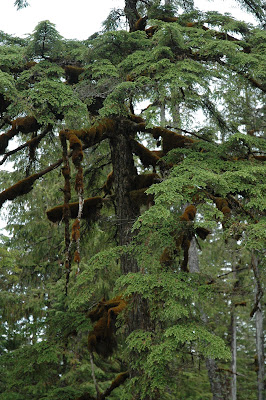 Look how thick the moss is on these trees. It rains a bit here 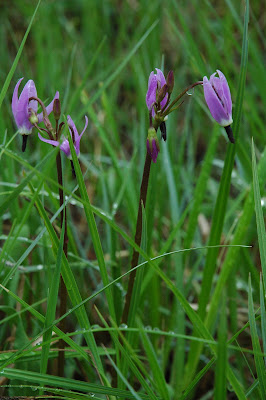 Shooting Stars were blooming ever where 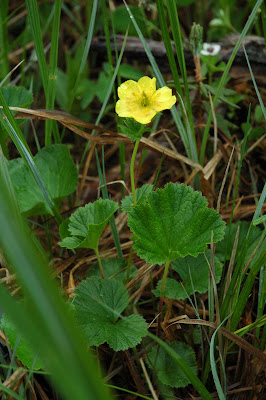 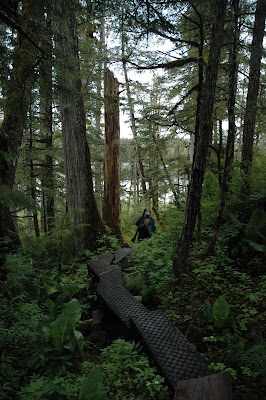 The boardwalk into Crane lake 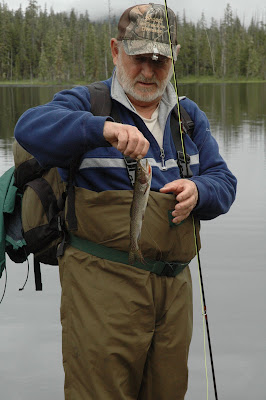 A cut throat trout caught on the first cast 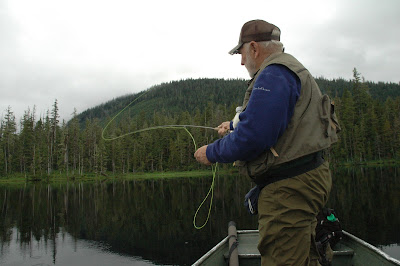 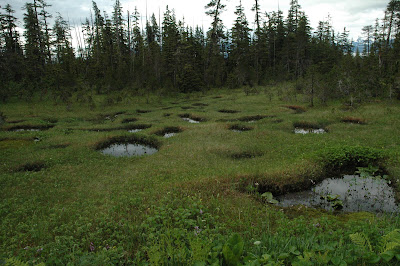 Muskeg in bloom
After leaving Crane Lake we spotted a turn out that climbed higher on the hill for a view of the LeConte glacier. (Our first glacier sighting) It is a long way off, but you can see the ice burgs that are probably similar to the ones Mr. Buschmann used to keep his fish fresh. LeConte is one of the few advancing tidewater glaciers left in Alaska. Tidewater glaciers end in the ocean, Cirque glaciers spill out into a lake they created.

On Wednesday June 17 we showed up at 10:30 to meet our next scheduled ferry. This vessel is the Kennicott and it will take us to Juneau in 8 hours. 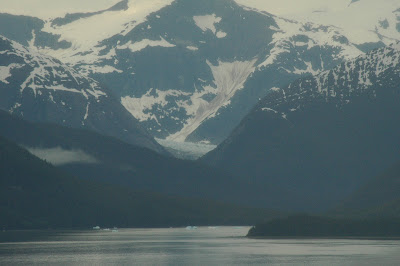 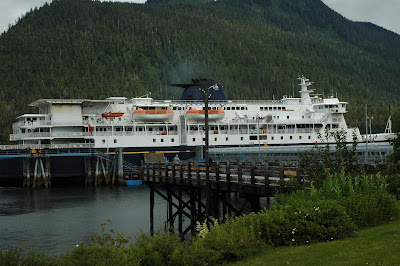