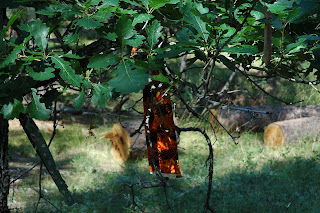 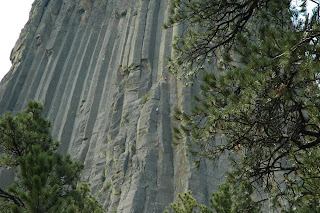 Prayer flags are tied to trees all around the tower.

Looking closely you can see two climbers on the Tower. There were three altogether and we think it was a climbing school because the man on ledge was calling instructions to the person below.

On the walk around the tower there were many prayer flags left by native people. They have requested that no one climb during the month of June because that is a time when they come to the tower for religious activities. In the past there have been as many as 1200 climbers on the tower in June. Since the request has been made only 220 people feel their right to climb is more important and the spiritual beliefs of native people.

One of the American Indian names for this formation is Bear Lodge, taken from one of their legends. It was named Devils Tower (no apostrophe) in 1875 when a Colonel Richard Dodge led a military expedition here. Native Americans don't like this name because of the bad connotations in the word devil.

The tower, which is 867 feet from the base was formed bymolten lava forced into sedimentary rocks. When the soft sedimentary rocks wore away, the harder igneous rock remained. A notation on a sign said that no rock has fallen from the tower since 1906. Think it is about time?
Posted by cooktravelogue2007-8.blogspot.com at 9:56 PM