On Saturday 8/11, we headed toward Helena. In a small town called Townsend we passed a fairgrounds that had a dozen or so horse trailers in the parking lot with horses and kids milling around. We decided to check it out. It was a junior event of some kind so we stayed and watched about 15 kids from ages about 5 to 15 putting their horses through the paces of pole bending and barrel racing. We had apparently missed the roping because we saw a few kids twirling ropes and there was a pen of steers at the side. Watching these kids have such a good time makes us want a horse of our own, but then, since our kids are grown, who would we get to muck the stall!


Just north of Helena we took a boat tour through the "Gates of the Mountains" When we were in Montana in 2003, we skipped this point on the Lewis and Clark trail. I can't remember why, but do recall being told by someone that it was a good experience so we wanted to make sure we saw it this time through.


In MeriwetherLewis' journal he wrote, "I shall call this place Gates of the Mountains", because as they paddled up the river the towering limestone cliffs rose on both sides of the river to a height of 1200 feet. The cliffs began abruptly and appeared to open before them as they came around a turn. Our guide had lots of geological information and history about how this section of river has been preserved from development. The land at the southern end of the "gates" was purchased in 1886 by a man named Nicholas Hilger. It began as a ranch and then, to add income, he added a boat trip through the limestone cliffs. In the 1940's when his last decedents needed to sell the ranch and boat business due to financial issues, a foundation was formed to purchase the land and business. Restrictions were placed in the deed that the land must kept in one piece always be used as a working ranch. This foundation continues to run the boat tours.

The boat trip passes by a spot that was a campsite for the Lewis and Clark expedition, which is now underwater. No artifacts have ever been found but from the journals left by Lewis and Clark, it is believed the location is accurate.

The boat also passed by the site of the Mann Gulch fire of 1949 where 13 smoke jumpers were killed. The guide recounted the event and mentioned the book about the disaster by Norman McLean called "Young Men in Fire". We had read this account within the last few years, so we were familiar with the story. It made the retelling of events even more interesting to see the gulch and have a visual of how the disaster could occur. 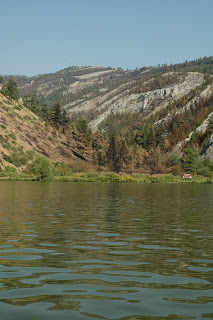 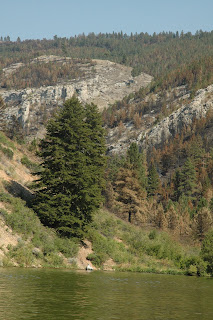 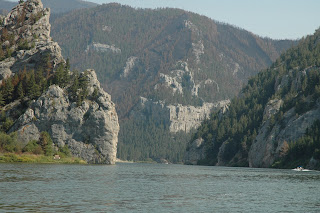 Mann Gulch fire location. You can see how narrow the gulch is and how the fire jumped from one side to the other 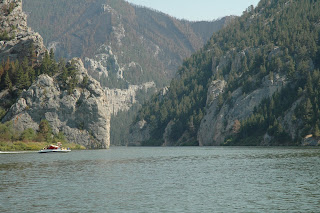 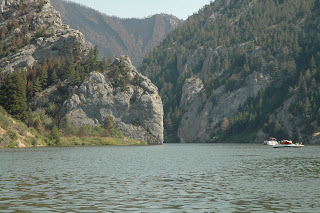 These pictures posted in the reverse order. As you see them the "Gates of the Mountain" are open, then close. I intended them to post as closed, opening, and open. Guess you need to use your imagination on this one.
Posted by cooktravelogue2007-8.blogspot.com at 12:11 PM