After exploring the mountains north of Rawlins, Wyoming and fishing on the North Platte for a week, we headed toward the Wind River.  At first we stopped in a town called Riverton. An interesting spot, big enough to have some specialty shops, unique restaurants, and, most importantly, good fishing.  The afternoon was spent scouting for boots and clothes to wear at the upcoming wedding in Jackson Hole.  The Boot Barn had a pair of cowboy boots that I fell in love with, but my practical side would not let me purchase them.  Marlin was unable to find any boots to fit comfortably, so we found a Bealls and purchased shirt, skirt and boots there.  Ready or not wedding, here we come.

From Riverton, which is at the southern end of the Wind River Canyon, we made the decision to travel north to Thermopolis.  This is a smaller town at the northern end of the canyon with multiple river access points.  The first trip through the canyon was jaw dropping.

The road follows the crystal clear water of the river.  When you first enter the canyon, the rock walls rise slowly. 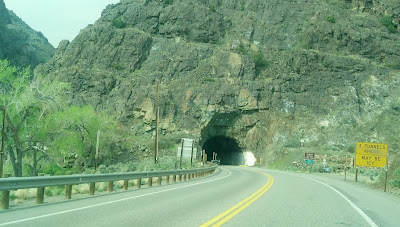 The further you travel, the steeper the rock cliffs become.  The road passes through multiple tunnels. 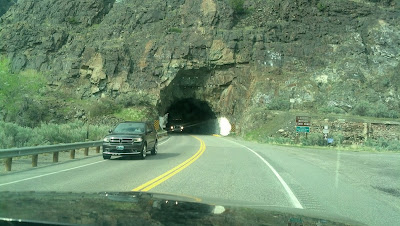 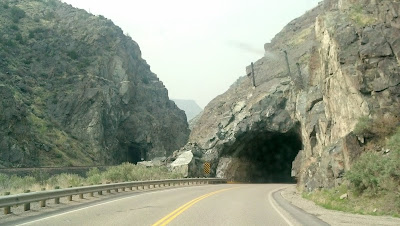 The train track follows the same path, through many tunnels, on the opposite side of the river. 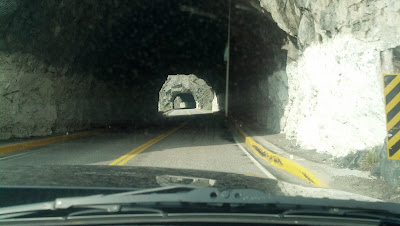 One of the tunnels is over half mile long.  Imagine blasting that rock away. 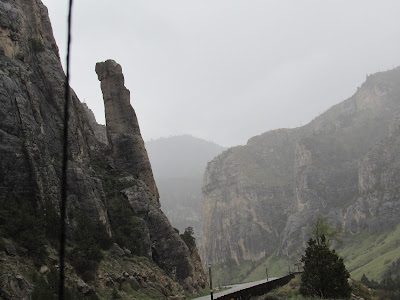 A tall chimney at the edge of the cliff.   There was a pull-out across from this inspiring rock.  Bet lots of pictures are taken here. 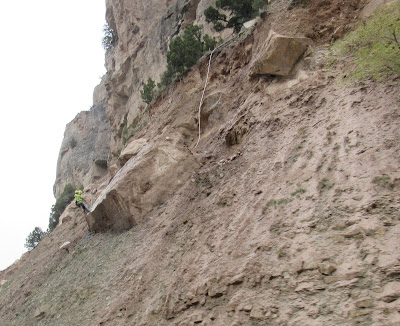 All along the canyon are signs for caution, due to frequent rock slides.  During the week we were there, there were flag men stopping traffic because workers were cleaning up rocks on the road. We could not stop, but I got a couple of quick "out the window" shots of men suspended on ropes, breaking up a huge boulder with jack hammers. It looked ready to fall the rest of the way down the slope. 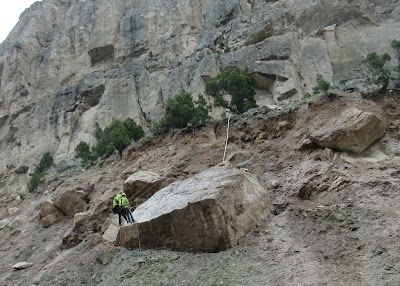 On one of the traffic pull-outs there was a picnic shelter.  The barn swallows had returned and were very busy rebuilding their nests under the eves. 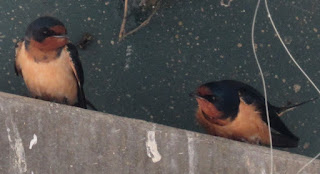 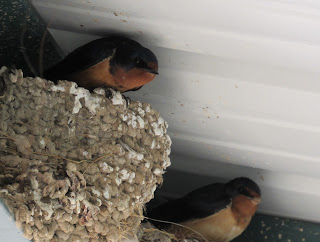 They were not bothered by my approach, until I got close enough to get an in-focus shot.  These pictures are not great but getting a shot of any swallow sitting still is good.

We stayed in Thermopolis for a week at a friendly campground.  The owner and his son gave Marlin lots of  directions on places to fish the river that were near by and guaranteed to produce results.  Marlin usually fishes "catch and release" but this rainbow trout was hooked to deep, so we had a delicious dinner. 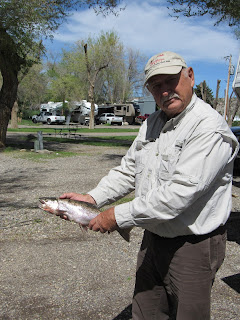 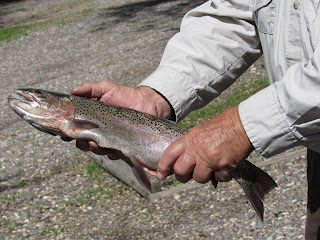 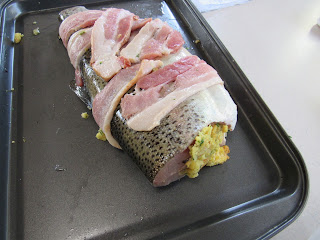 Stuffed and wrapped in bacon, cooked on the grill.  Best meal all trip. 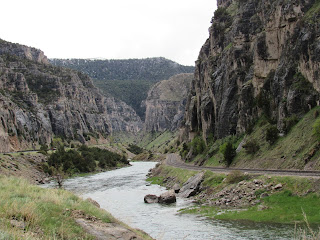 One day I traveled into the canyon with Marlin.  Most of the river is within the Wind River Indian Reservation, with two small sections that are part of Boysen State Park. At the park you can fish with only a Wyoming fishing license instead of an additional Reservation permit.  Poking around the park, I found a sign telling about a dam that was built at this point in 1901.  It is a beautiful section of the river, but I could see why it would make a great dam site.  The dam did not last long because flood waters filled up the turbines, making it useless.
The campground we fished from was created with silt and debris from the dam. 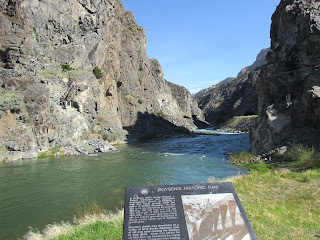 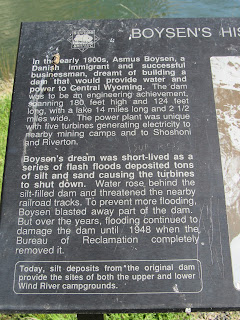 After a week of great fishing, but poor catching, it was time to move toward Jackson.  We stopped for two days in Cody.  Spent some time at the wonderful Buffalo Bill Museum of the West.  We also met Butch and Addy Dubois for dinner that night.  They were on their way to the wedding also.  The next day we drove into Yellowstone, where we met James and Shellie.