The day we visited the Pecos National Historical Park we noticed that their was a Ranger tour of the Glorieta Battlefield on the next Saturday.  When we eventually realized we would still be in this area through Saturday, we called and signed up for the tour.

As you enter the Park property, the first structure you pass is the Kozlowski Stage stop, which was on the famous Santa Fe trail.  At a much later date, this stage stop became the Forked Lightening Ranch, owned by Buddy Fogelson and his wife Greer Garson. 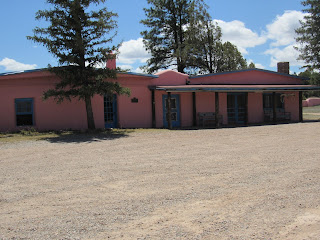 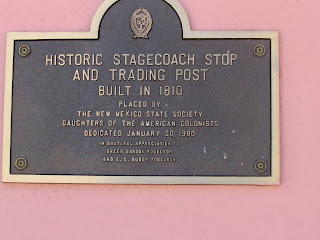 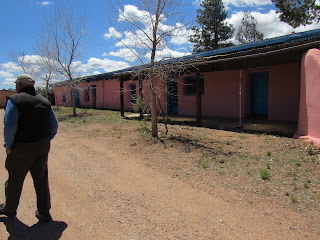 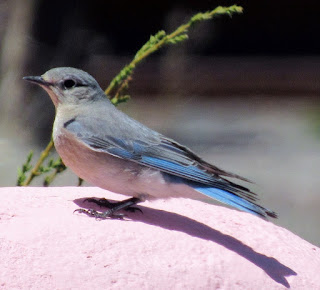 This bluebird posed on a pink post, which makes it look like he has a pink belly.


On March 24, in 1862, the Kozlowski stage stop became the bivouac for the Northern troops, and the site of the first skirmish between North and South troops in the battle called Glorieta.  Union troops had marched from Denver, over the Raton Pass, to Fort Union and then to Kozlowski's stage stop near Glorieta Pass, all in 14 days.  The soldiers had hardly settled in when they were surprised by a small advance Confederate force, who retreated after a short skirmish.

Confederate forces were camped at Apache Canyon on the western side of the pass.  On March 26, four hundred Union soldiers encountered the Confederate  troops.  That day ended with the South retreating.  However, Chivington, the Union commander, did not know if there were Confederate reinforcements coming as back up, so he returned to Kozlowski's stage stop that night instead of pursuing the Southerners.

The next day was spent incorporating reinforcements for both sides, bringing the numbers to 1300 men for the South and 1100 men for the North.  On the 28th the Union troops headed again toward Apache Canyon, to attack the Confederate camp. One group of Northern soldiers was sent to circle around and come up behind the Confederate troops to attack from the rear.  Unfortunately, the southerners had advanced through the pass and encountered the first group of Union troops near Pigeon Ranch. 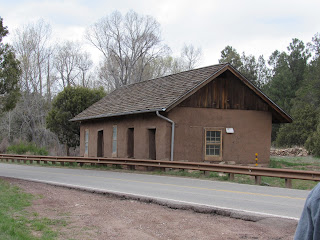 What is left of Pigeon Ranch 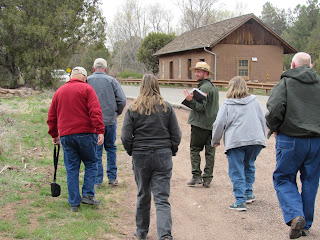 Our tour group, lead by our enthusiastic Park Ranger 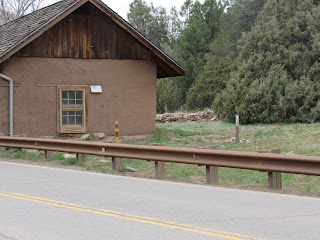 Pigeon Ranch was a toll booth on the Santa Fe trail.  The stone wall on the right, built to funnel traffic to the toll opening, served as cover during the battle.  The main Union force was beaten back several times by the Confederates.  At the end of the day, assuming they had been defeated, the Union called for a truce, which was accepted by the Southerners.

While that main battle was taking place, the other group, that was sent to attack from the rear, came over a mesa and discovered all the Confederate supply wagons concentrated at Johnson's Ranch.  The supplies were guarded by one canon and a small group of soldiers.  Instead of going on to find the rear of the Confederate forces, the soldiers descended the mesa, over powered the guards, burned all 80 of the supply wagons, and scattered about 400 mules.

Neither side had any idea that the other group of Union forces had succeeded in eliminating the Confederate supplies. What was originally thought to be a defeat on the part of the Union army, suddenly became a major victory.  Since all the Texans, who had been recruited to the Confederate Army, had marched from Texas by obtaining supplies from Forts taken along the way, they had no back-up supplies at all.  Loss of all their food, ammunition, mules, wagons, and other supplies, put an end to the plan the Confederacy had for expanding into western territory.

The battle of Glorieta Pass has been referred to as the "Gettysburg of the West".  This association did not seem to make sense.  The casualties at Glorieta Pass were small, unlike the slaughter at Gettysburg.  Our Ranger guide explained that the comparison is made because, the Union success here ended the Confederate's hopes of gaining the much needed resources from the gold fields in Colorado, and access to ocean ports in California.  If the South had been successful in gaining the desired resources, the results of the Civil War may have been different. 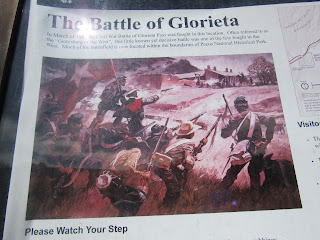 Our Ranger guide was incredibly well informed and delivered mountains of information with great enthusiasm.  His delivery contained many maps, as well as copies of letters written by soldiers who participated in the battle.  He kept me interested for the entire two hours, even though I am not a Civil War fan. 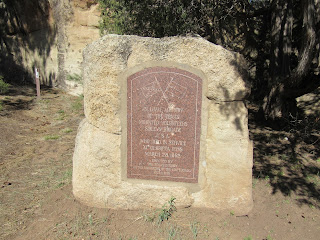 One of the Battlefield monuments 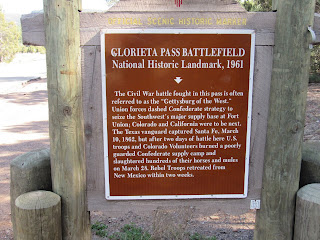 In 1991, after her husband's death, Mrs. Fogelson (Actress Greer Garson Fogelson) sold her portion of the Forked Lightning ranch, to The Conservation Fund, who in turn donated it to the National  Park Service.  The Ranch included the old Kozlowski Santa Fe stage stop buildings.  Our ranger said the brilliant pink color is called "Greer Garson pink", since she was the one who choose to have everything painted that color.  Many other sections of the battlefield remain on private property and along a busy route 50, making access to the site very difficult.  There is a 2 1/2 mile walking trail available, which includes numbered markers.  I would recommend waiting for a Ranger tour.

"Disclaimer"  This post turned out to have a great deal of information about the Battle at Glorieta Pass that may not seem very interesting.  Since part of the reason I do this blog is to keep track of our travels, I felt I needed to list some of the battle sequence so that I could remember it myself.  Not my usual style, but it will keep it in print for me to refer to when needed.  (When that would be I cannot guess!)
Posted by cooktravelogue2007-8.blogspot.com at 12:49 AM