Mike and Mary Hartt joined us this week in their new camper and shared some fun adventures over the next six days.  Some successful, some not so.  Our search for burrowing owls and budgerigar parakeets were a bust, although the exploring widened our knowledge and appreciation of this section of rural Florida. 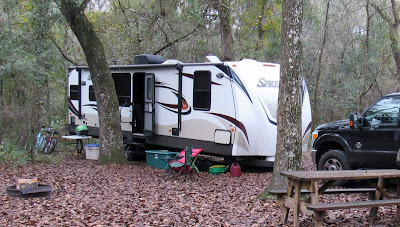 The Gulf coast is about 30 miles west of our campsite, so we picked out several places that sounded interesting. We checked out Bay Port one day.  There was a boardwalk out into the bay for fishing, so the guys went back the next day to try their luck.    No fish on the line but we did have great fish tacos at Becky Jack's Snack Shack.  Yum! 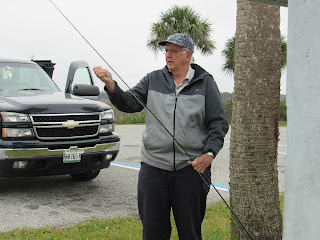 Fred Howard County Park, outside Tarpon Springs, is accessed by a mile long causeway into the bay.  Quiet on the cool, windy day  we were there, but when it is hot it must be mobbed.  This 115 acre park offers 2 playgrounds, 9 picnic shelters, launch areas for canoes and kayaks, restrooms, and a beautiful white sand beach.  The ocean water is clear and warm (by New England standards) but the air was chilly that day so we did not swim.  Caught a few shore birds, but no fish (again) 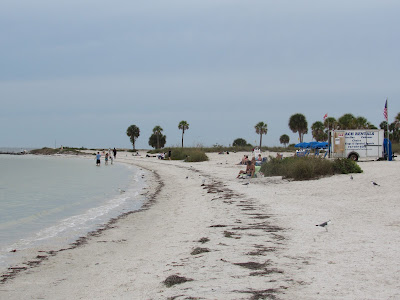 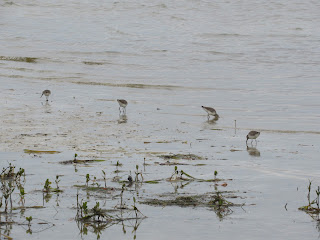 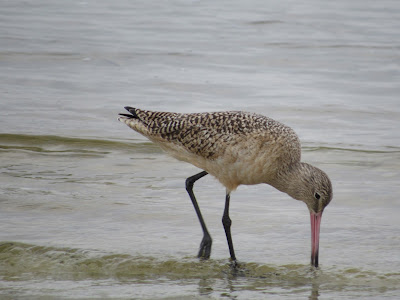 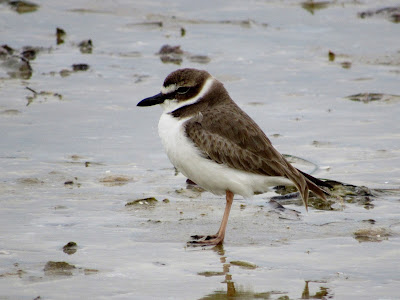 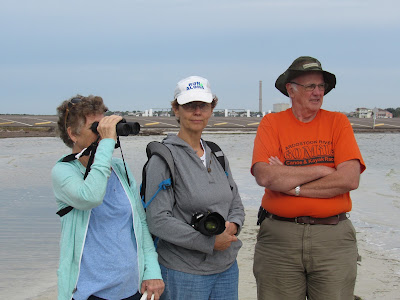 Being this close to Tarpon Springs we opted to do a bit of browsing  at the Sponge Dock shops before indulging in a sea food dinner.
Mary had already scouted out a spice and tea shop that was unusual.  Along with the soap store she dragged me into I got quite a bit of next years Christmas shopping done!  Another great day.

As strange as it sounds, Weeki Wachee is the actual name of a town, a State Park, and a river.  Back in the 1940's and 50's and 60's the facility that is now a State Park, was known for it's extravagant underwater mermaid show.  The Park grounds include the original spring, which every day pumps 117 million (yes million) gallons of fresh, clear, 75 degree water up from limestone fissures underground.  Well kept grounds follow the Weeki Wachee River created by the spring.  The park still promotes the mermaid show, but it seems to be way less extravagant these days!  The short boat trip along the river was a fun introduction to the beauty of this waterway. 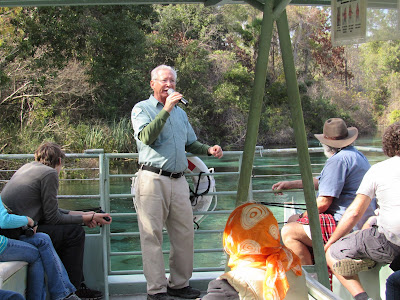 The tour narrator talked about the wildlife that can be seen along the banks.  Not the day we were there however.  But it was a beautiful ride. 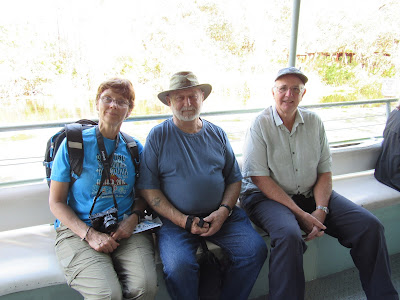 We did take in the mermaid show.  Consensus was that they need a consult from cirque du Soleil to pep up the act.  It was interesting to hear about the history of the show and how the underwater "theater" was created in 1946 and placed 6' underwater, in the 100' opening to the spring.  It really became famous in 1959 when the attraction was bought by ABC.  They built the current theater seating 500 people, placed 16 feet underwater. Those were the days when the mermaids would stand out by the road to entice tourists to stop and see the show.   It became a State Park in 2008. 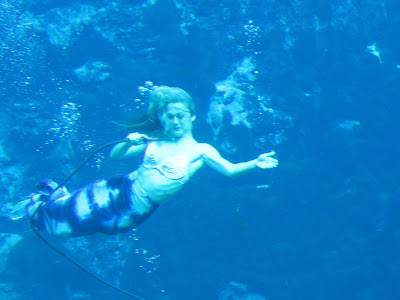 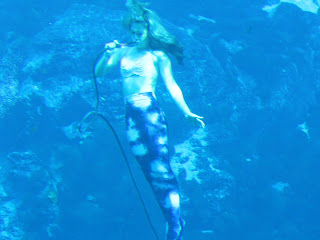 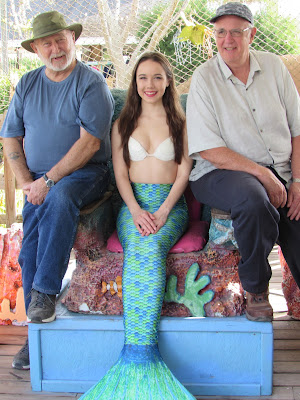 Mike and Marlin got to have a picture with this young "mermaid in training".  She said it takes a year and a half of training before you can be in one of the shows.  Quite difficult to learn the tricks to maintaining precise locations while breathing from the air hoses.

Another feature of the park is their kayak and canoe rental system.  Boats are launched at the park location, and you can paddle the five miles all day as long as you are at the pick up point by 3:00.  We came back the next day to do just that. 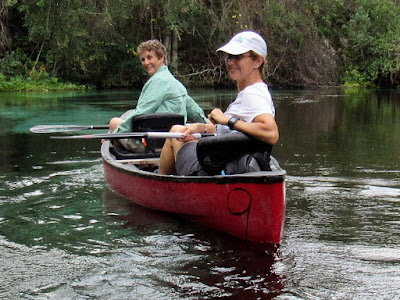 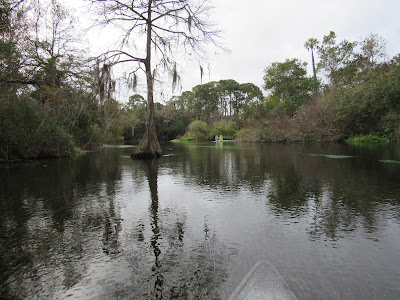 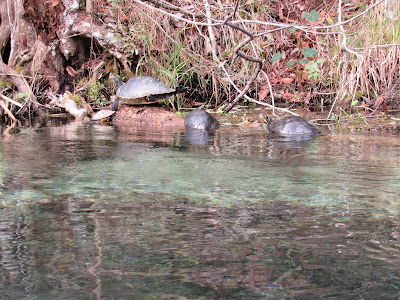 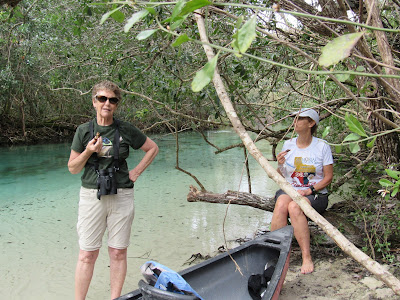 Lunch on a sand bar. 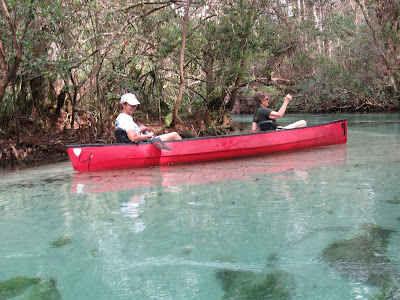 Beautiful 5 mile paddle in crystal clear warm water.  The best was saved for last.  About 1/4 mile from our pick up point there was another spring that joined the existing water.  This was the gathering spot for a pod of about 15 manatees.  They weren't going anywhere.  They come at the end of the day to spend the night in the warm water.  What a treat.  The manatees are glad to share their space with boats and even swimmers. 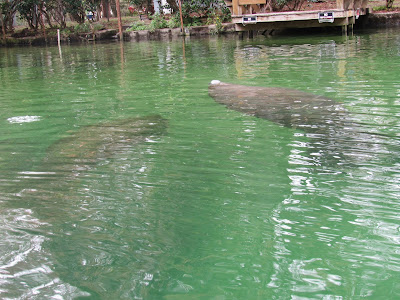 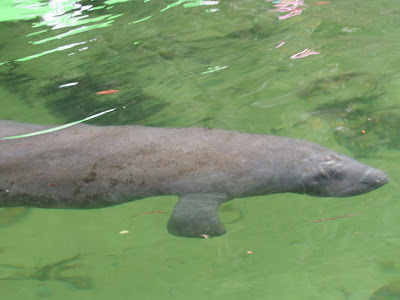 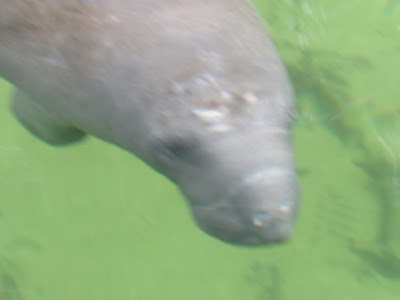 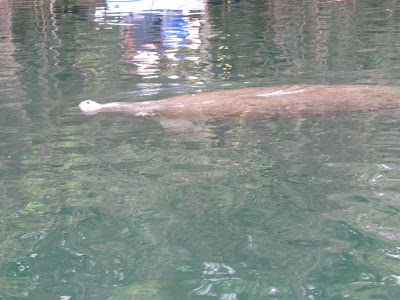 One more fun adventure for this week.  We traveled to the Crystal River State Park and Archaeological Museum, only to find it closed on the day we were there.  Walking the grounds, we talked with a woman who was a birder.  She told us about a rare red-cockaded woodpecker and gave us directions to where to find it.  Her instructions were to go there at dawn if you wanted to see the bird.  We went at dusk, just to find the place.  Much to my overwhelming surprise, after driving down more than a mile of dirt road, looking for trees with white paint on them, we found, not only the location, but the actual bird.  I was pretty excited because I have been on many unsuccessful bird pilgrimages.  Our pictures are not that great, but good enough to definately identify this bird.  Hopefully, Mary took much better shots with her giant lens. 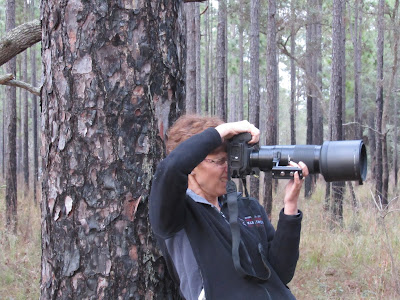 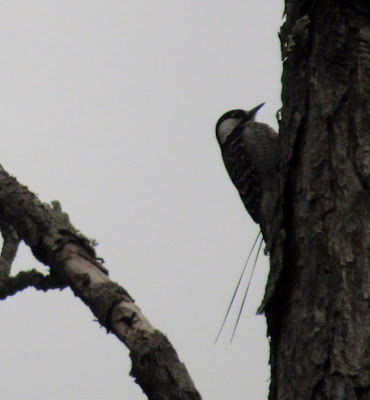 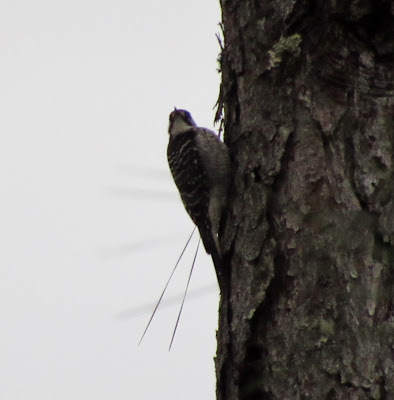 Quite a week!  Off to visit John Miles in Naples.