Colorado Springs is the home of the United States Air Force Academy.  Since we were still waiting out the bad weather, and Marlin spent four years in the Air Force, how could we leave Colorado Springs without a visit to see the Academy.  The school has a visitors center and a self guided tour of a few of the facilities buildings. Visitors begin with a 20 minute movie about what it is like to be a first year cadet at the Academy.  Very inspiring film.  Wish I could share it with my grandson.

Exhibits include information based on their four pillars of excellence; character development, academic, athletic, and military training.  Many of the extra curricular activities the cadets have to choose from were highlighted.  My favorite was the falconry.  The Academy mascot is a falcon and the school trains and maintains a flock of 13 falcons, which take flight and return to the handlers, during athletic events.

The 306th Flying Training Group has a mission of inspiring future pilots through the experience of soaring.  Outside we  watched multiple gliders being launched from tow lines and coasting on the thermals just like the hawks and vultures. 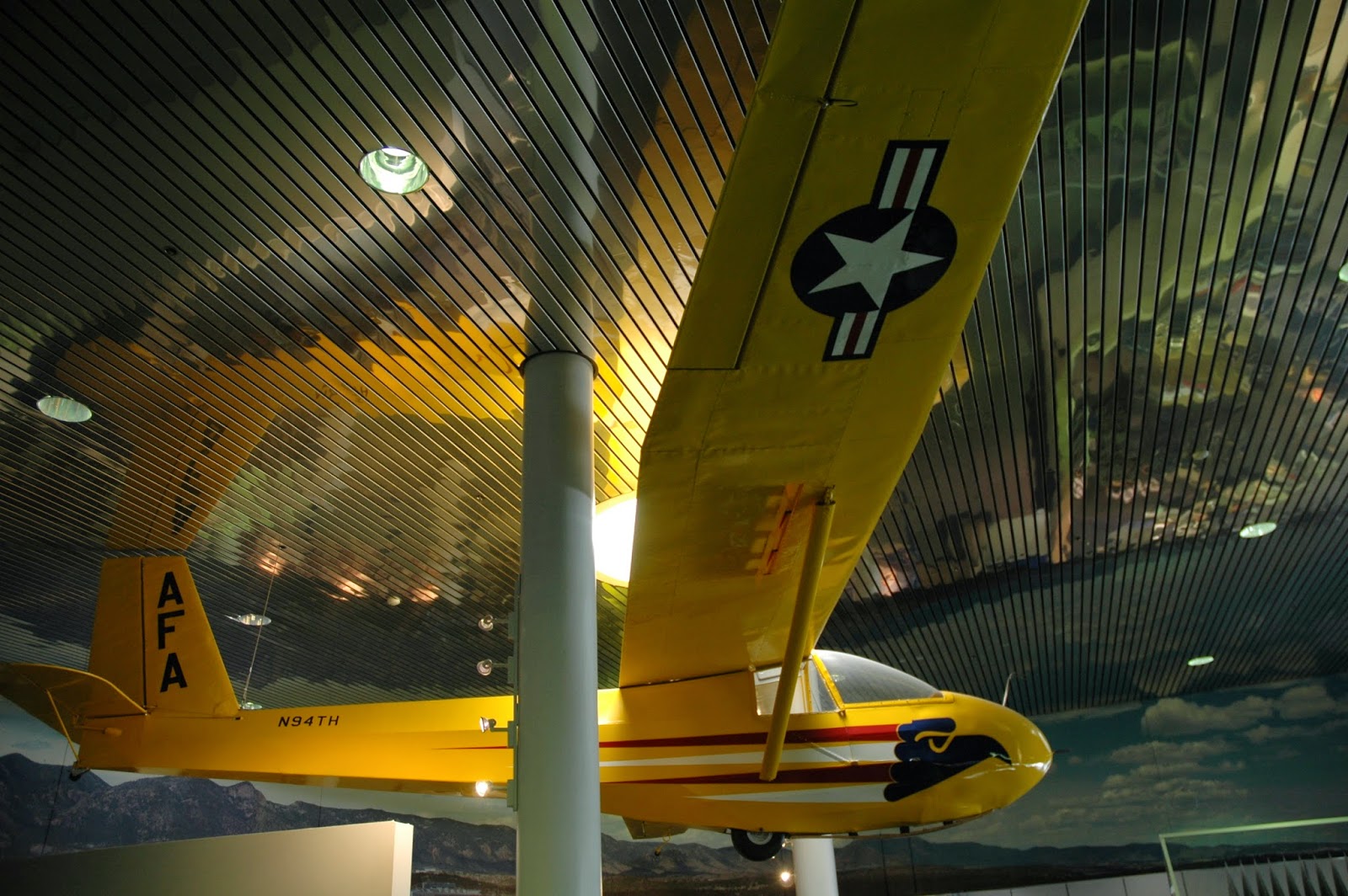 The visitors center had one of the gliders on display, as well as a model of the Cadet Chapel 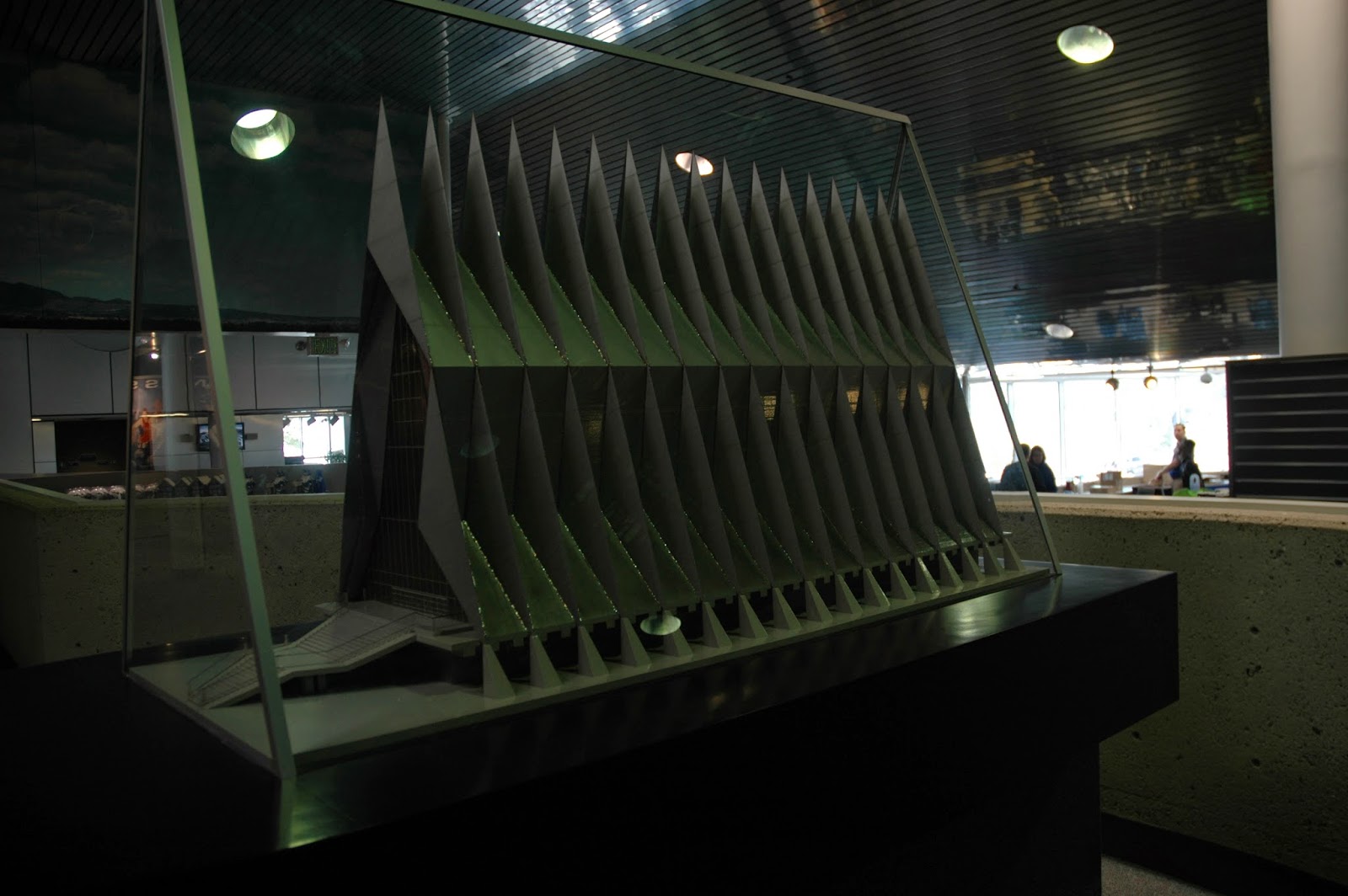 The Air Force Academy in Colorado Springs was opened in 1958, and today has 4000 students. The cadet chapel on the campus is one of the most visited attractions in Colorado.  Begun in 1959 and completed in 1963, the chapel was designed by Walter Netsch, and is constructed of 17 steel, glass, and aluminum spires that soar 150 feet high.   It was apparently very controversial when first built, but today is a major attraction for visitors.  It is certainly the most striking aspect of the campus. 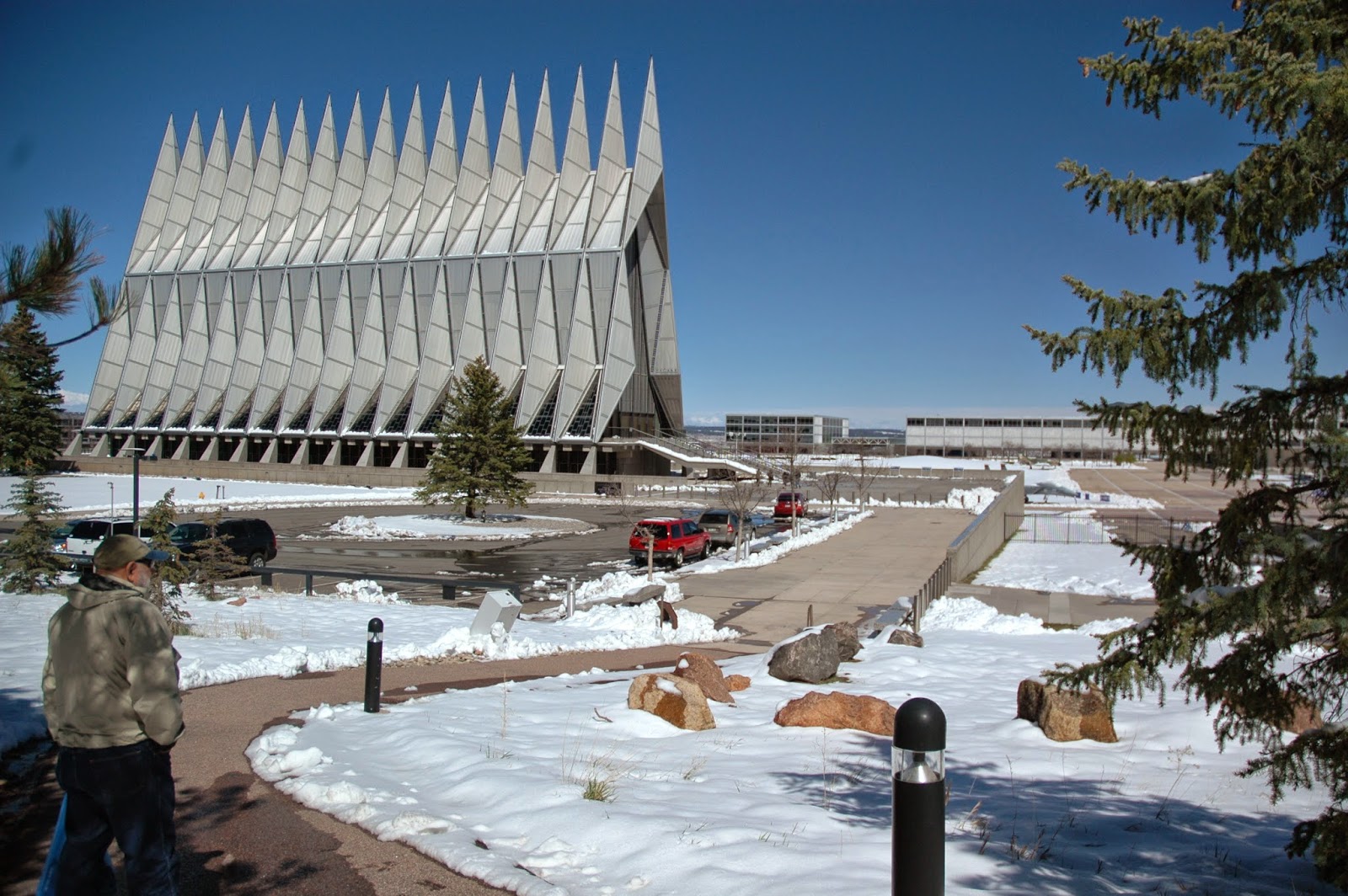 Walking from the visitors center, by way of a 1/3 mile path along a wooded slope, visitors arrive at the first view of the campus grounds and the famous chapel. 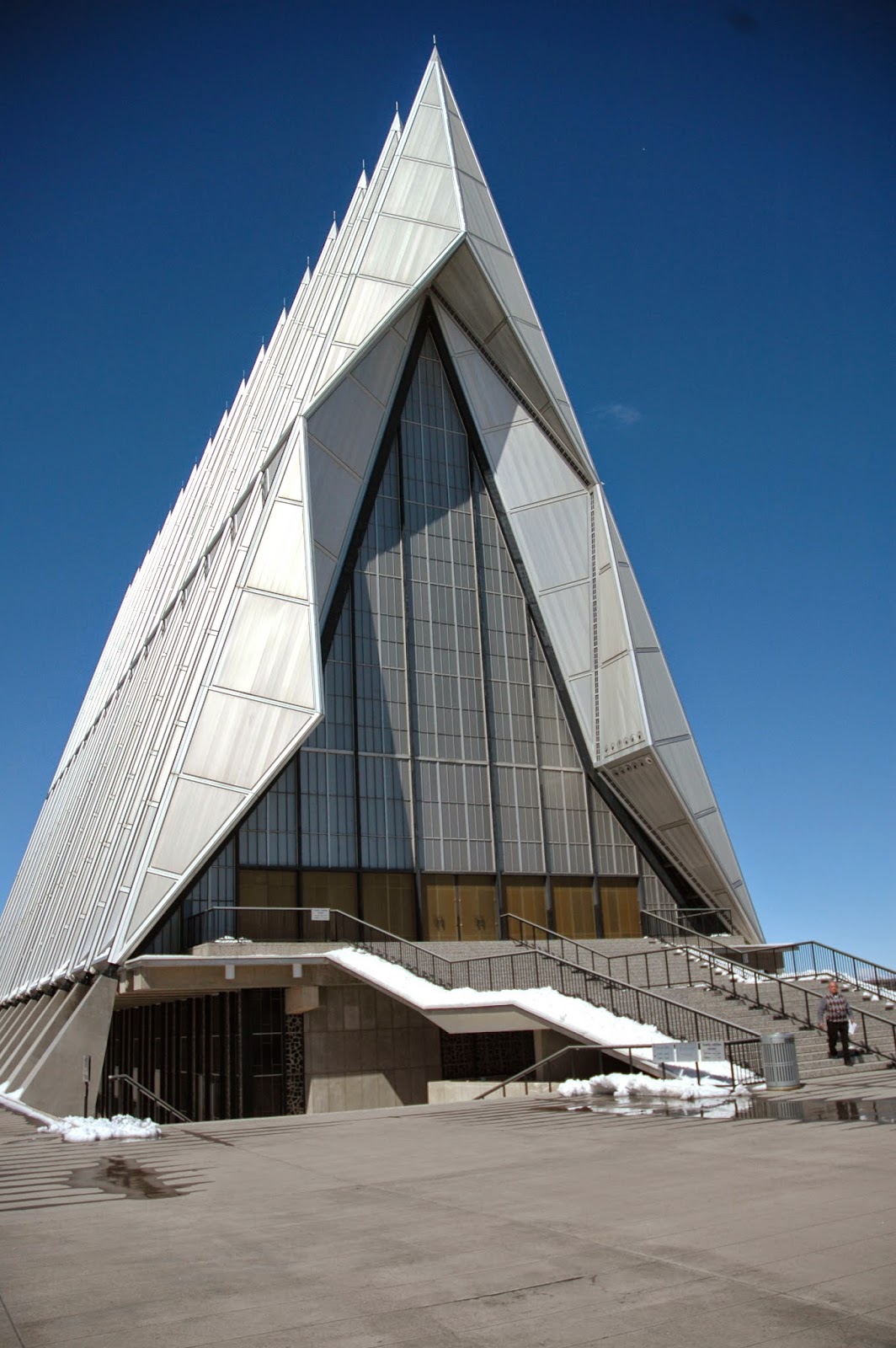 The outside of the building is amazing 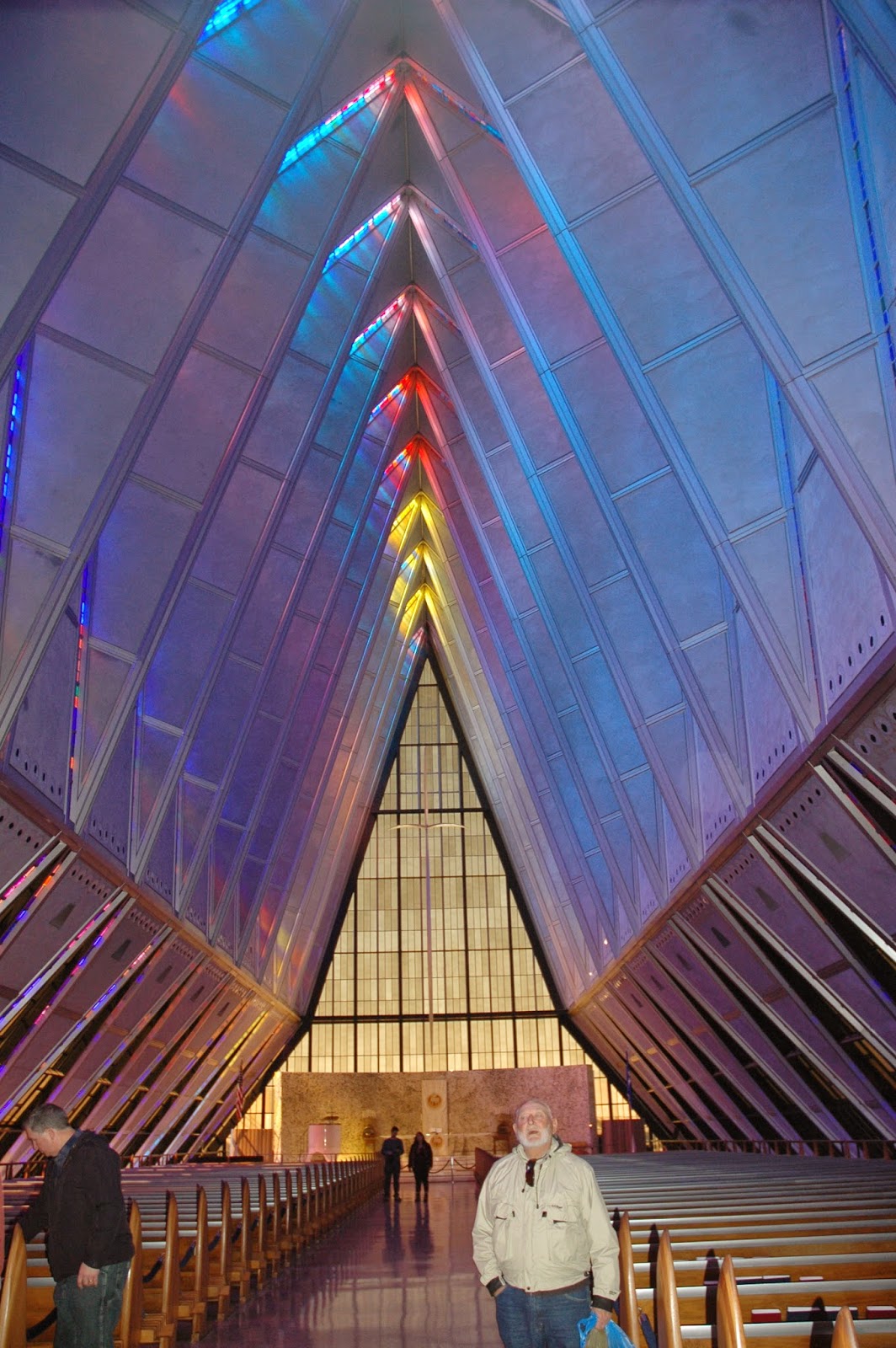 But the inside takes your breath away.  Photos certainly don't capture the effect of stained glass panels that reflect light between each steel spire. 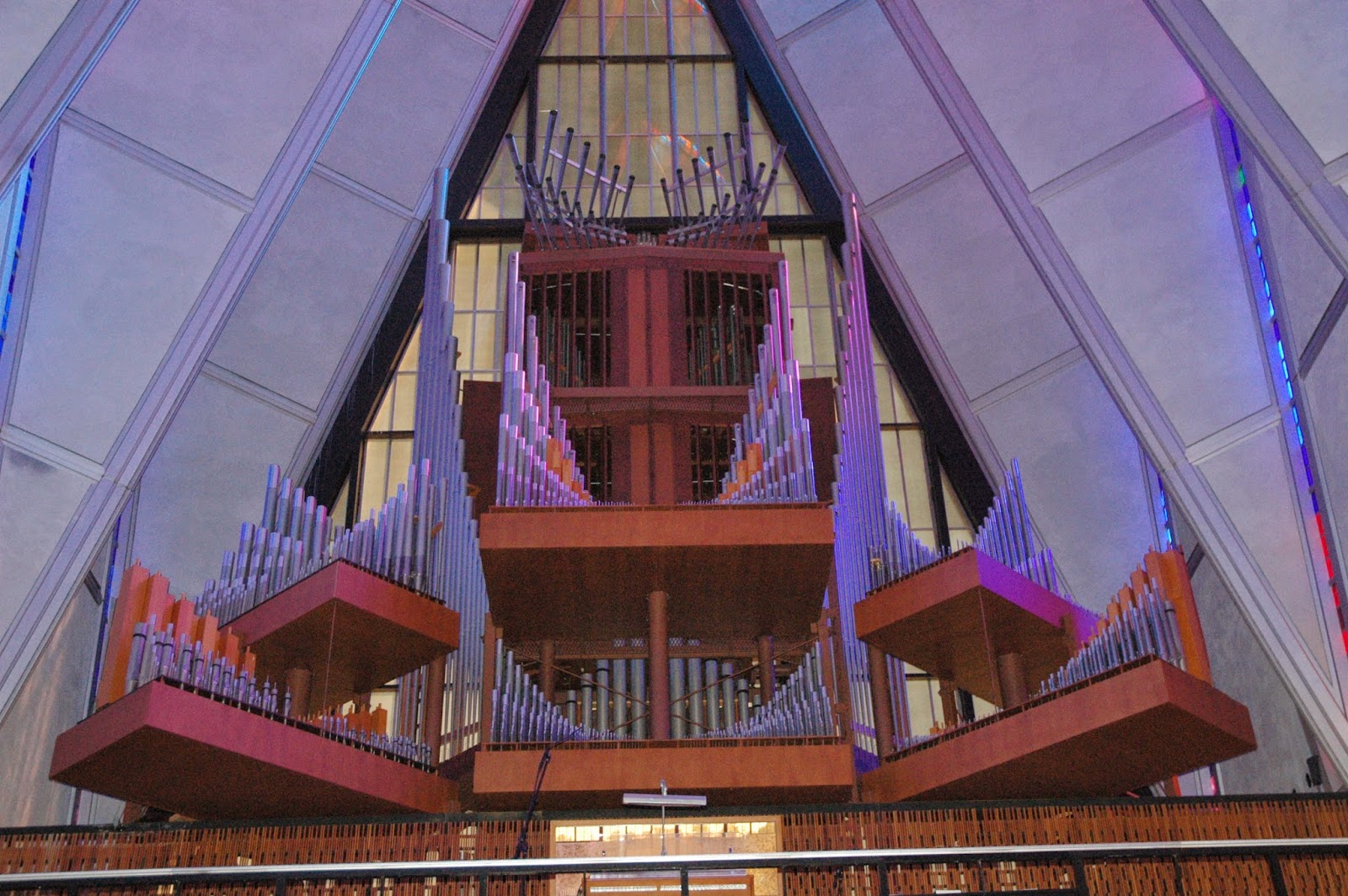 A pipe organ sits in a balcony at the rear of the sanctuary. 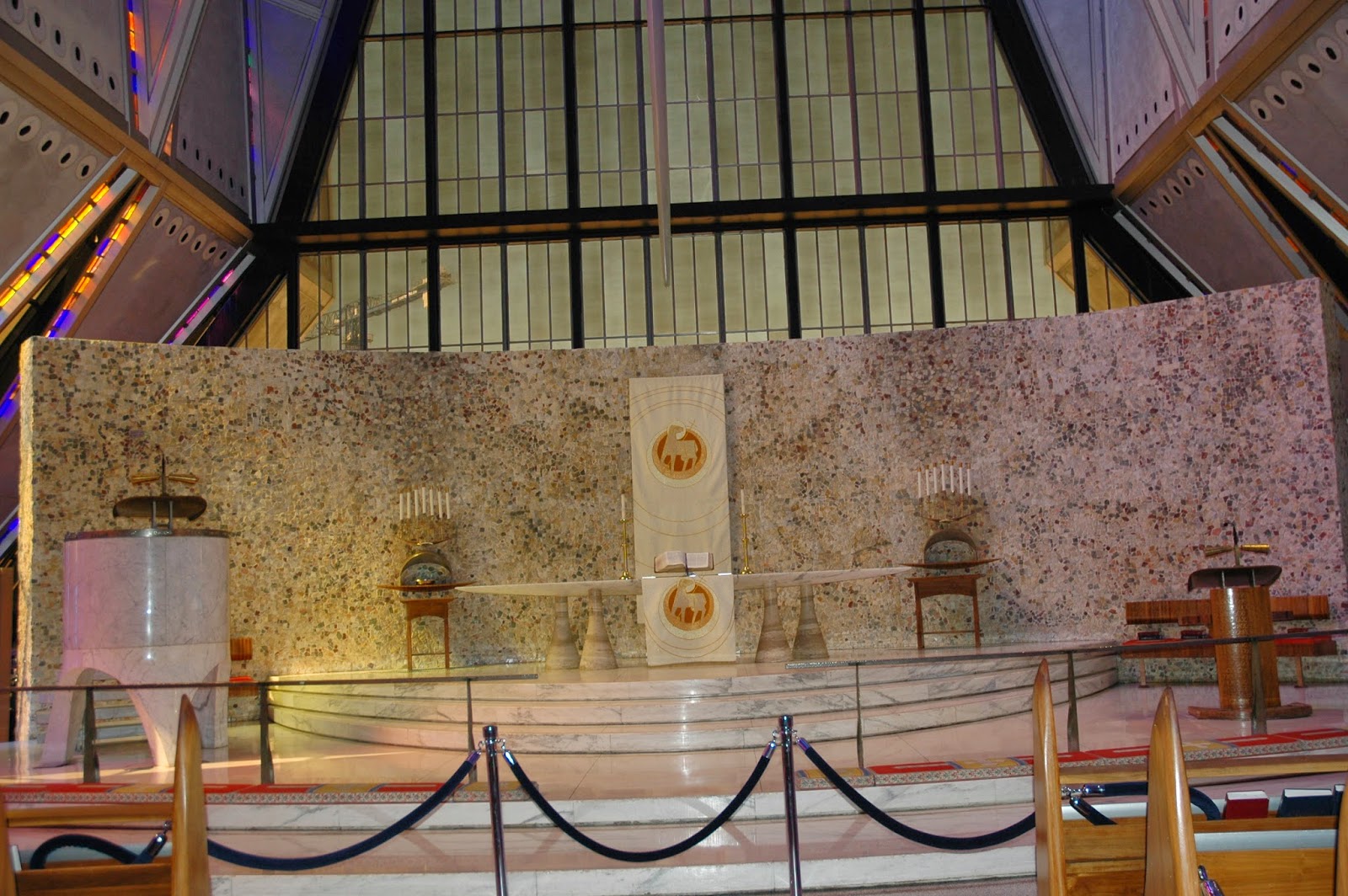 The alter in the Protestant chapel. 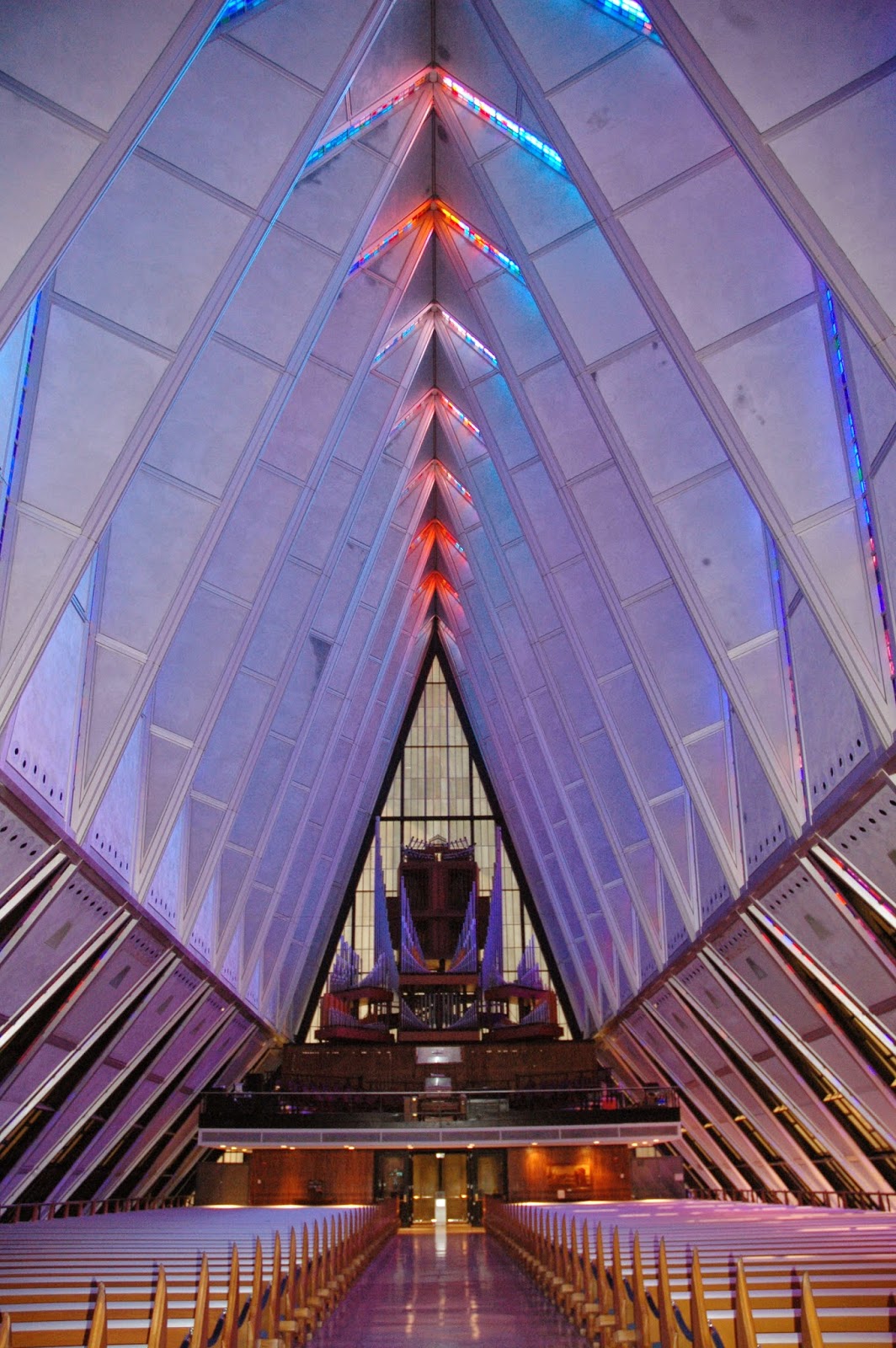 Looking back from the alter toward the entrance doors. 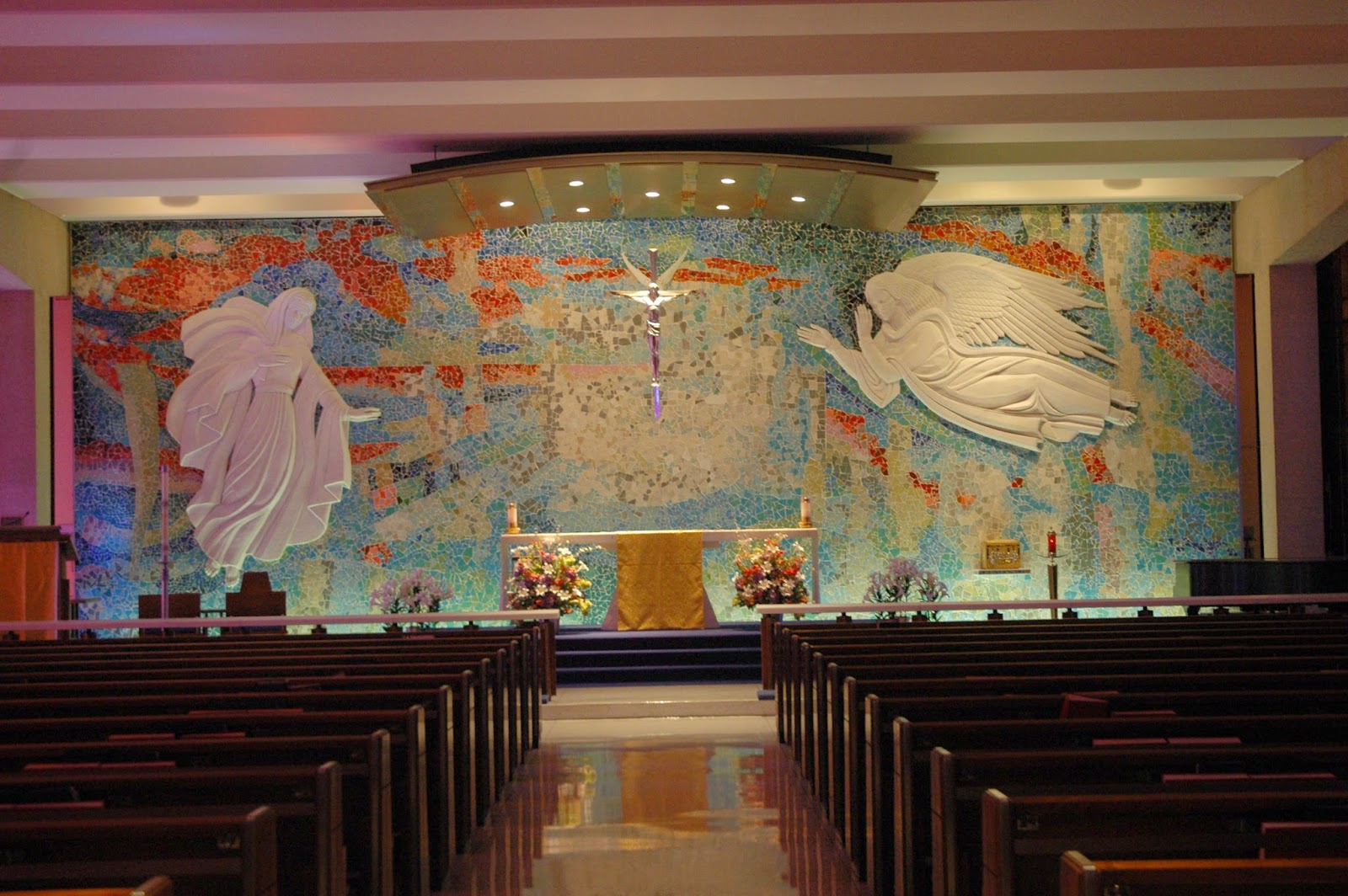 The alter in the Catholic chapel was a beautiful mosaic 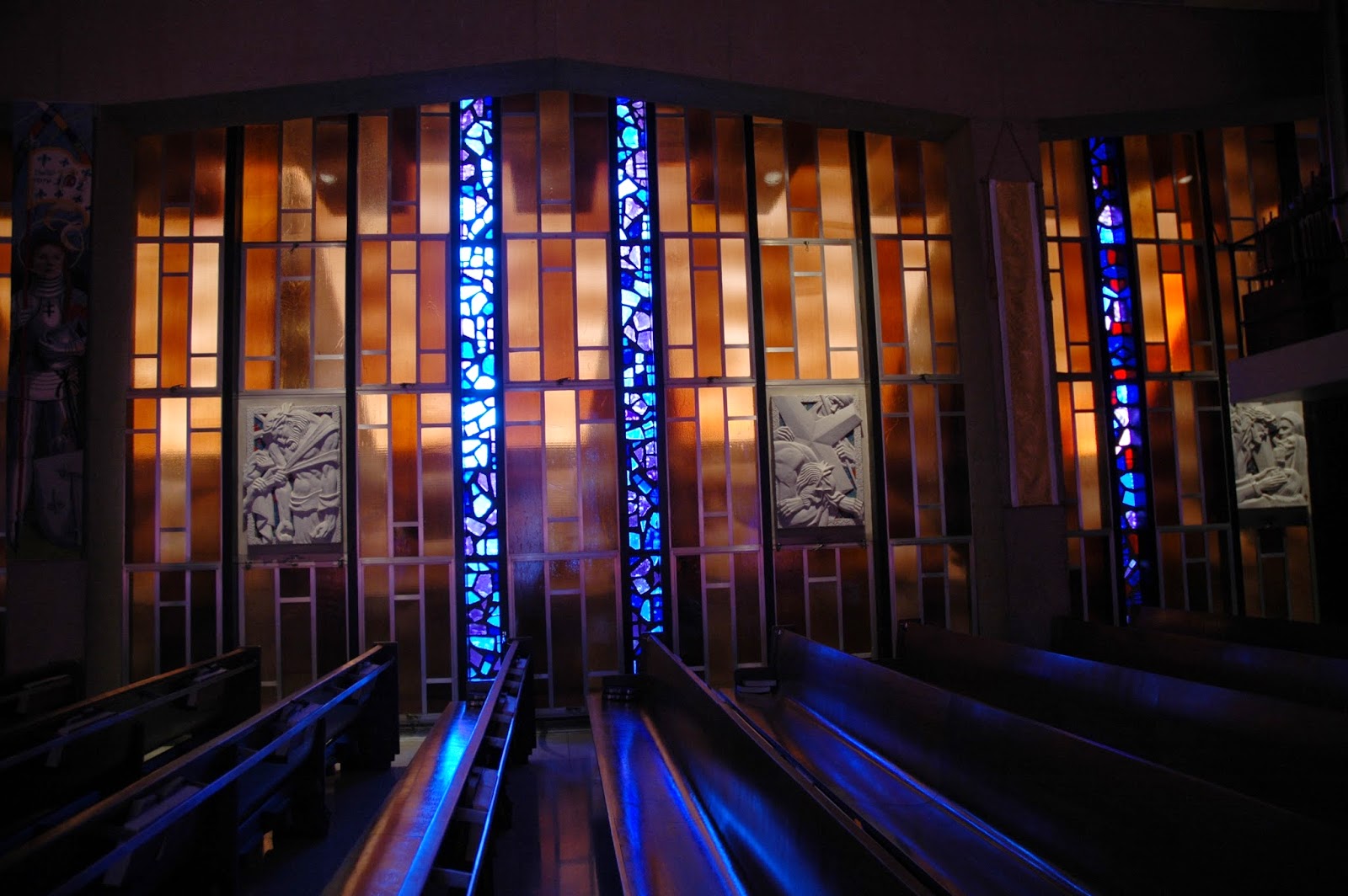 Stations of the cross in the Catholic chapel were carved in marble.  There were also Buddhist and Jewish chapels in the building.

Standing at the front of the chapel there is an over-look of the classroom section of the Academy, where we could see an occasional student walking between classes.  When new cadets are in the first six weeks of basic training, they are only allowed to walk on the white marble strips that divide the pavement.  They are not allowed to speak unless spoken to and then only with a select number of phrases.   We were hoping to be there when the students marched, in formation, to the dining hall for lunch, but we missed that event. 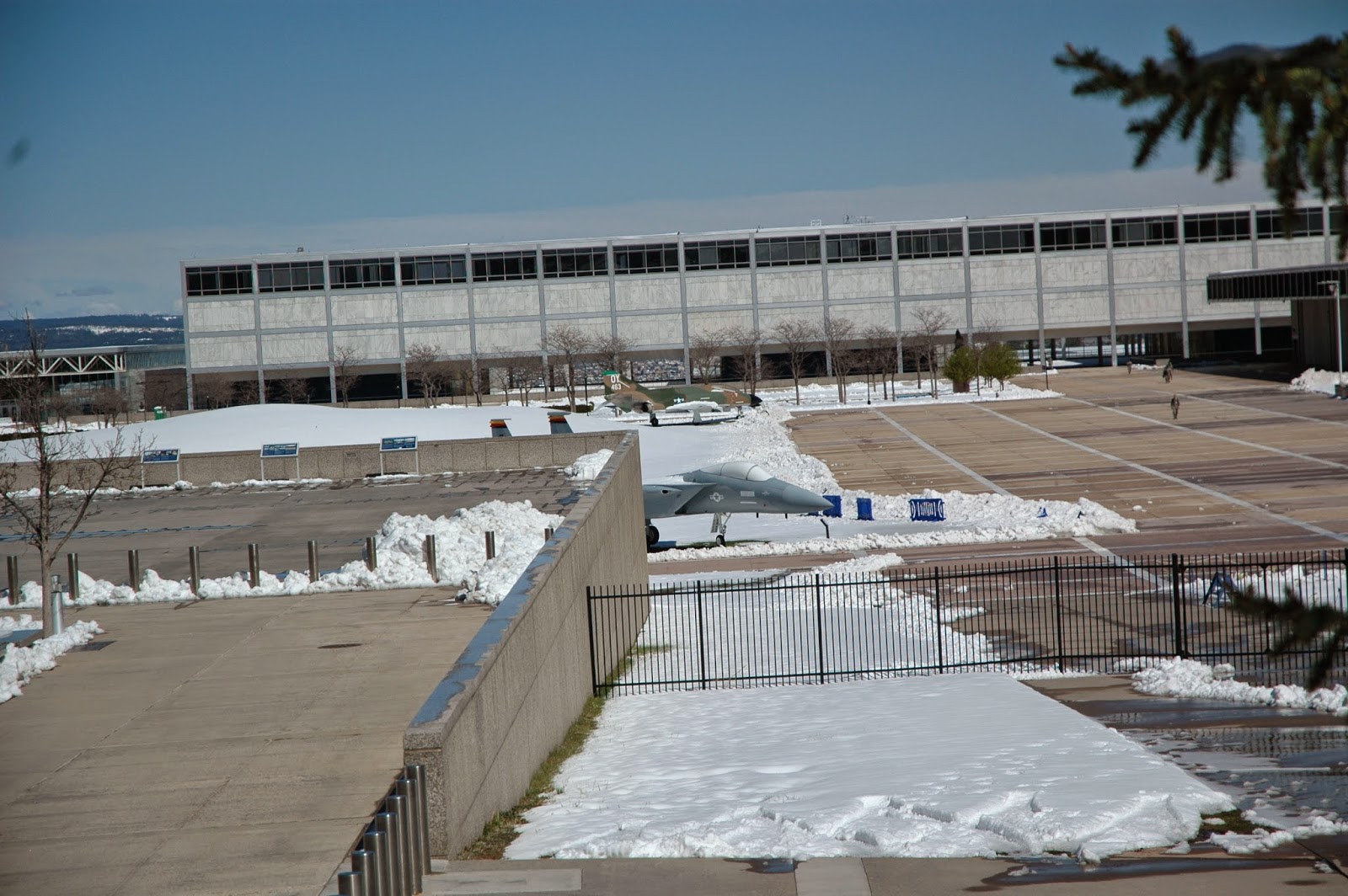 Visitors are only allowed in a small number of building on campus, and are restricted to a very few roads, but it was an interesting tour, regardless of the restrictions. 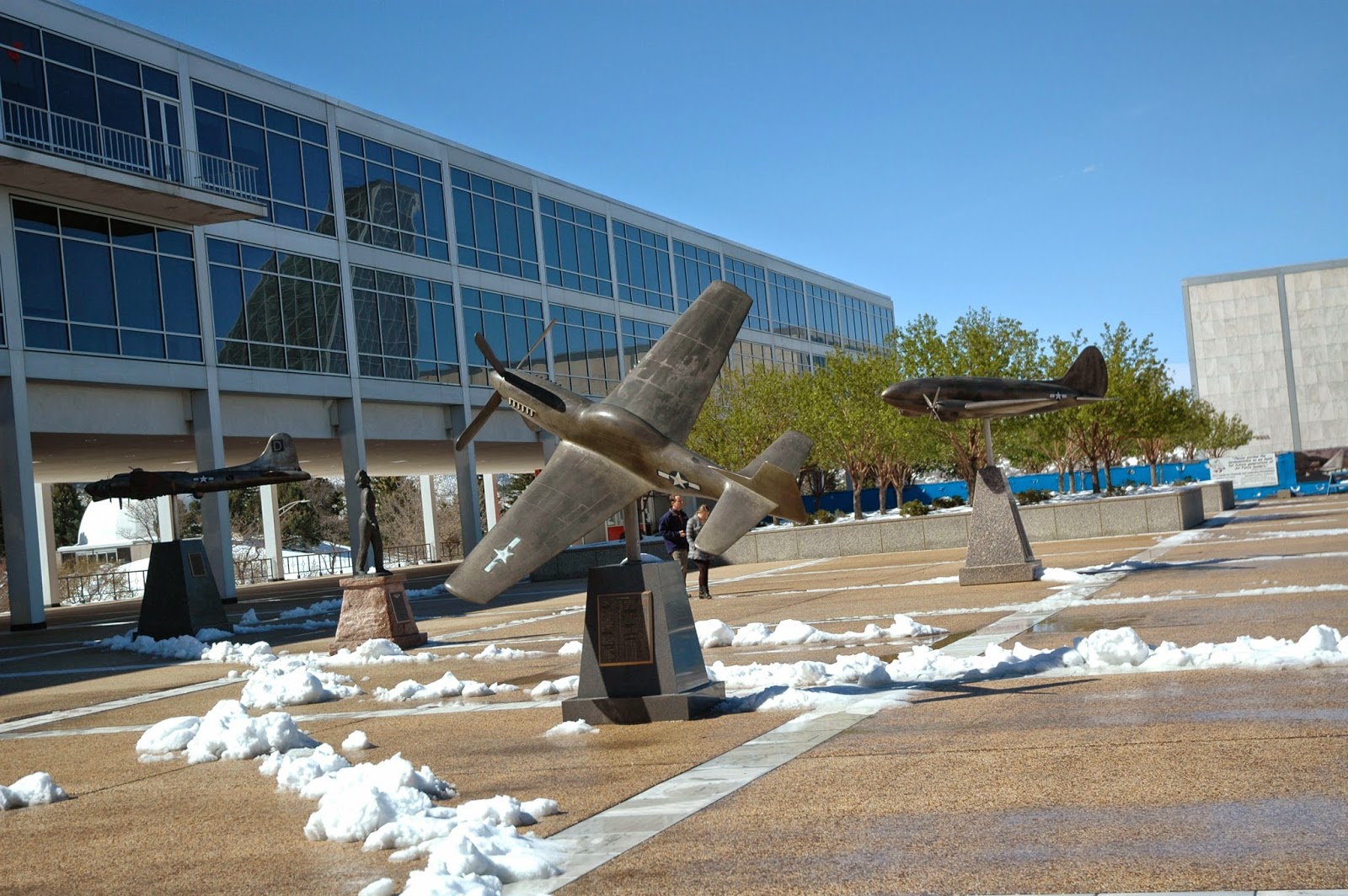 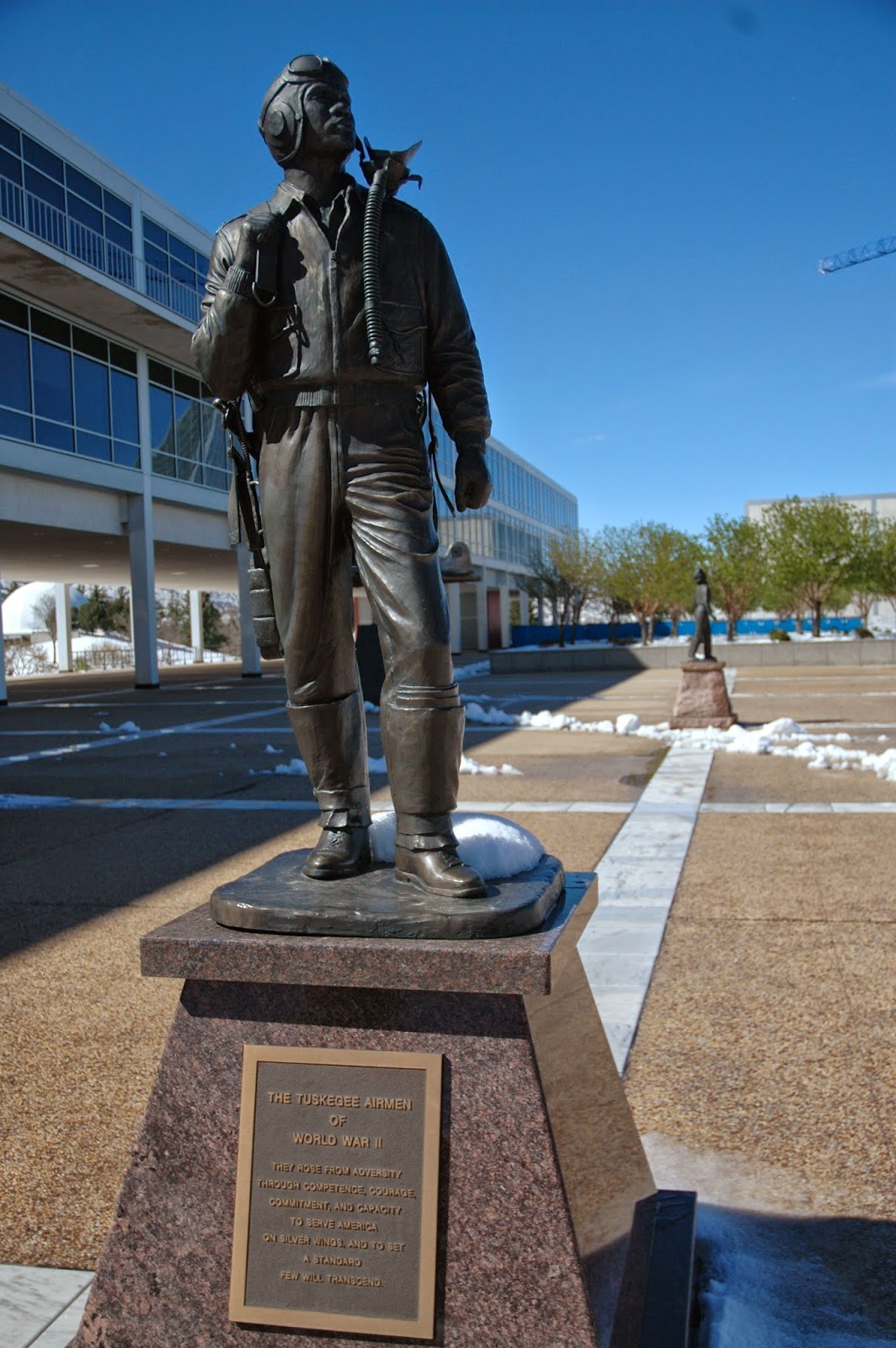