Returning to the lower elevation, we located a State Park that was within the Colorado Springs city limits.  Cheyenne Mountain State Park sits up in the hills above the city, backed up by the higher Front Range mountains.  This premiere park has only been opened since 2006.  The park's 2700 acres, formerly the JL Ranch, offers 20 miles of hiking/biking trails and 51 full service camp sites.  The campground is set out in multiple small cul-de-sacs , each containing 8 campsites.   Because the park is located  just beneath the eastern flank of Cheyenne Mountain, the views from each campsite are extensive. 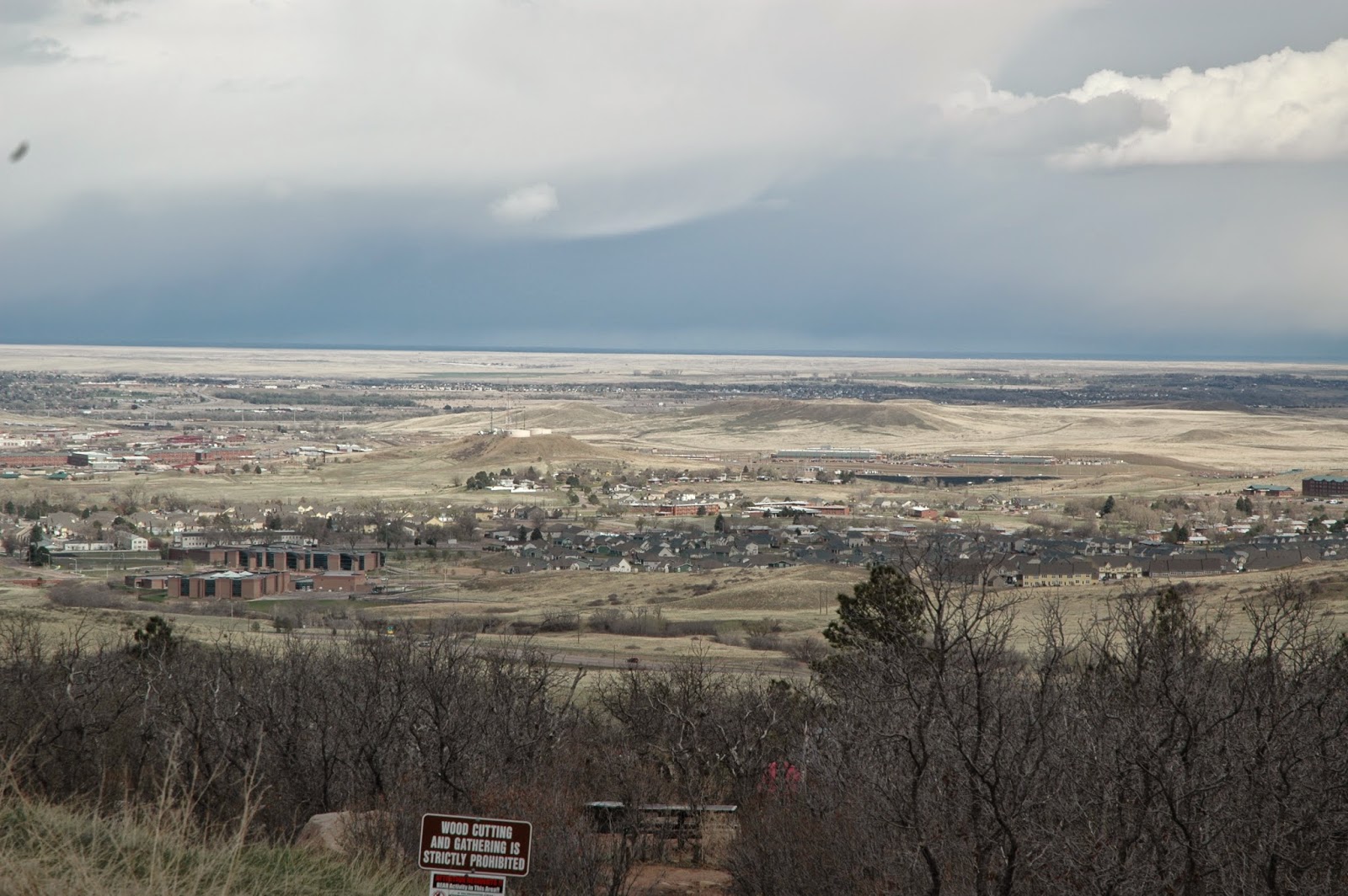 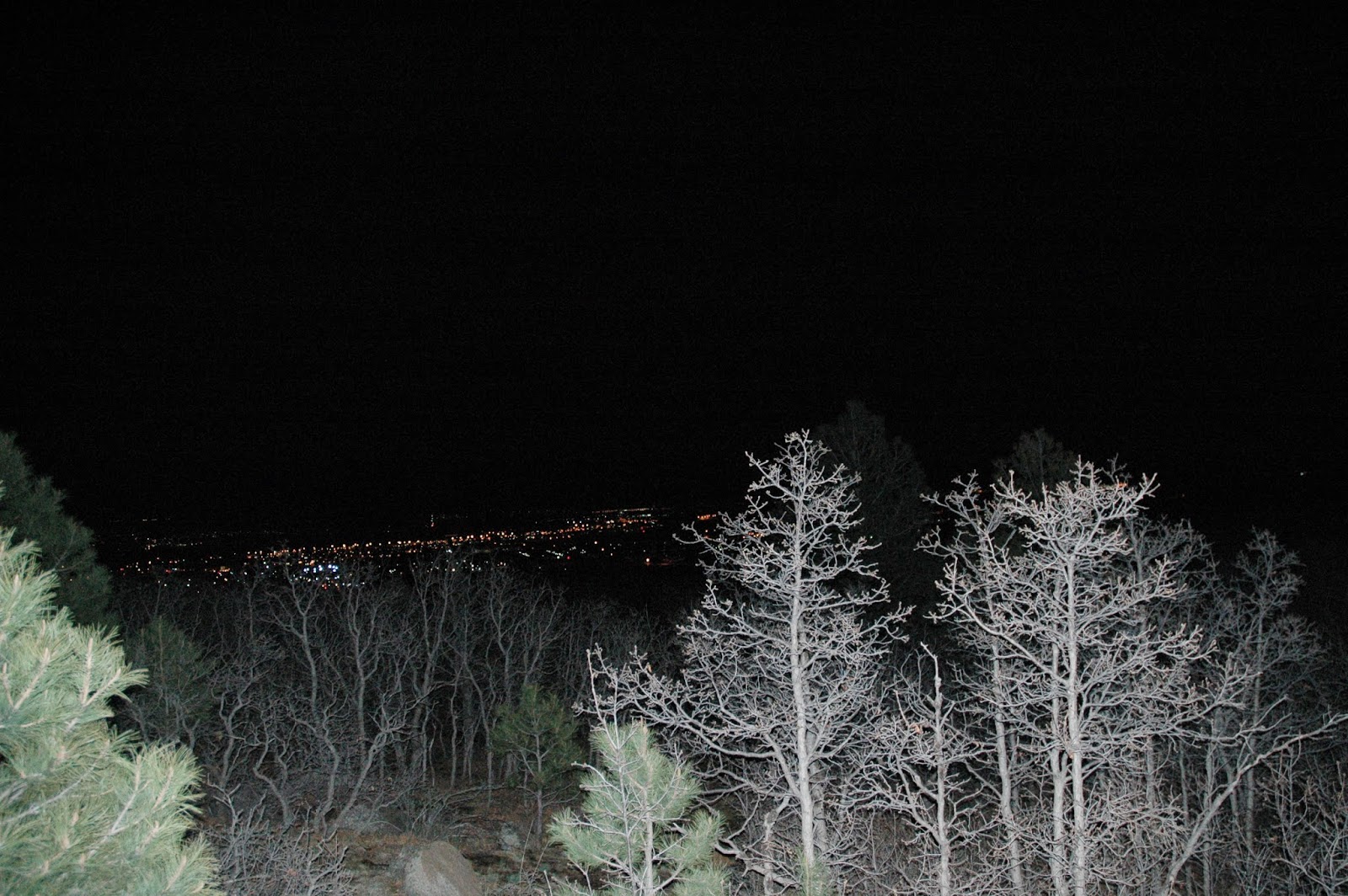 Between every two circles there are rest rooms 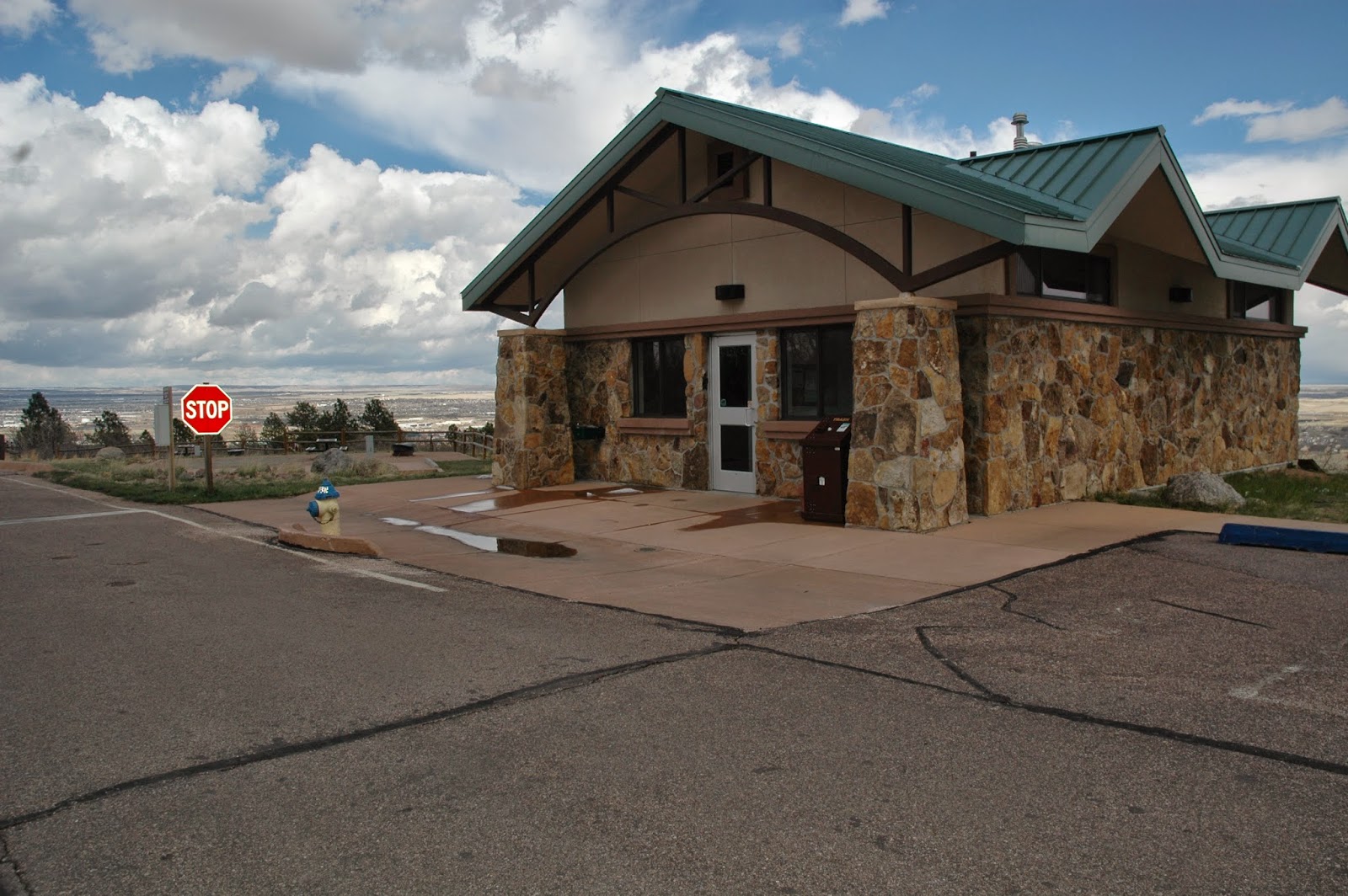 Situated at a central location is a Camper Services building with a small store, laundry and showers. 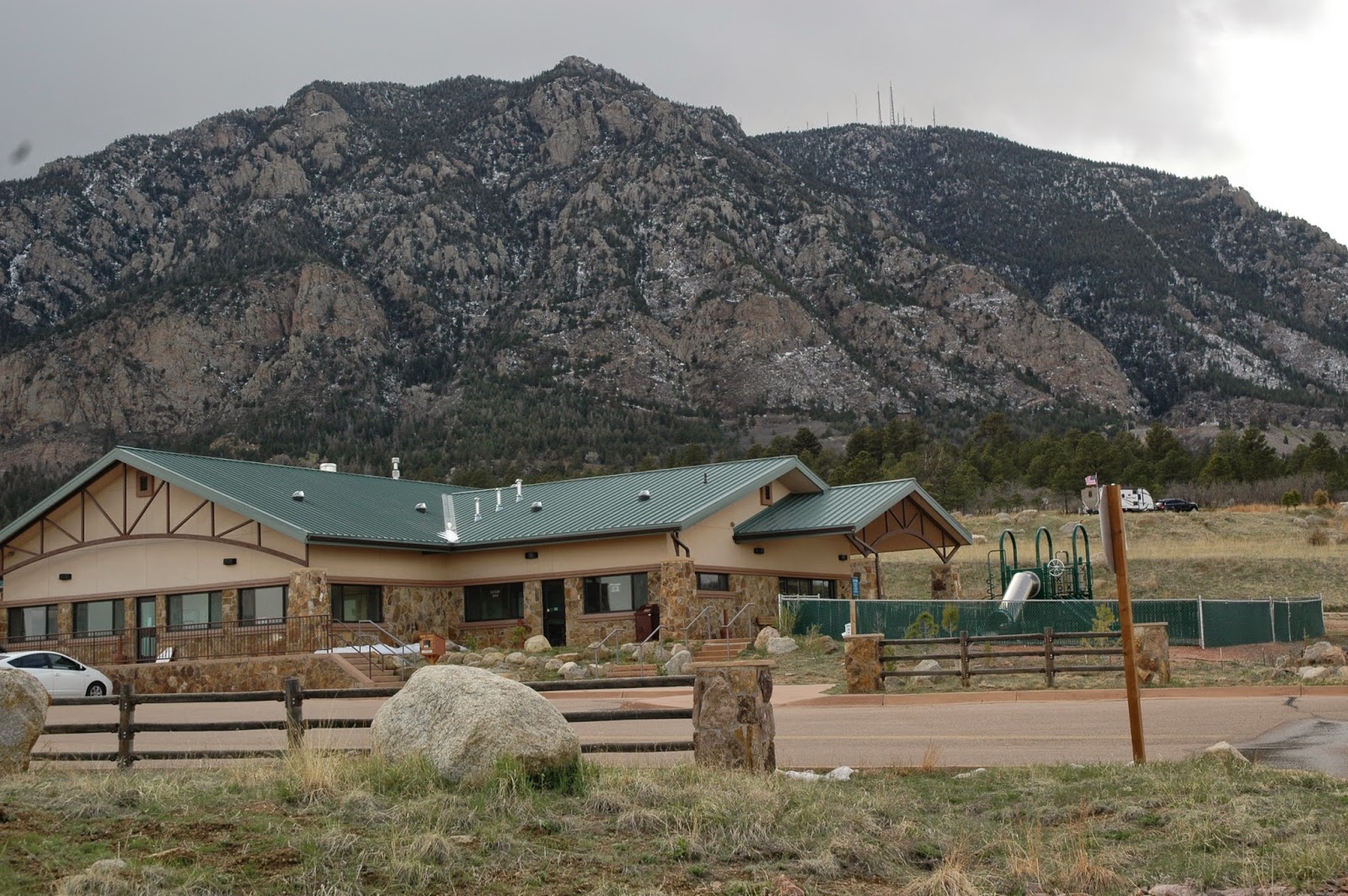 All the trails are paved with a fine gravel and are well marked. 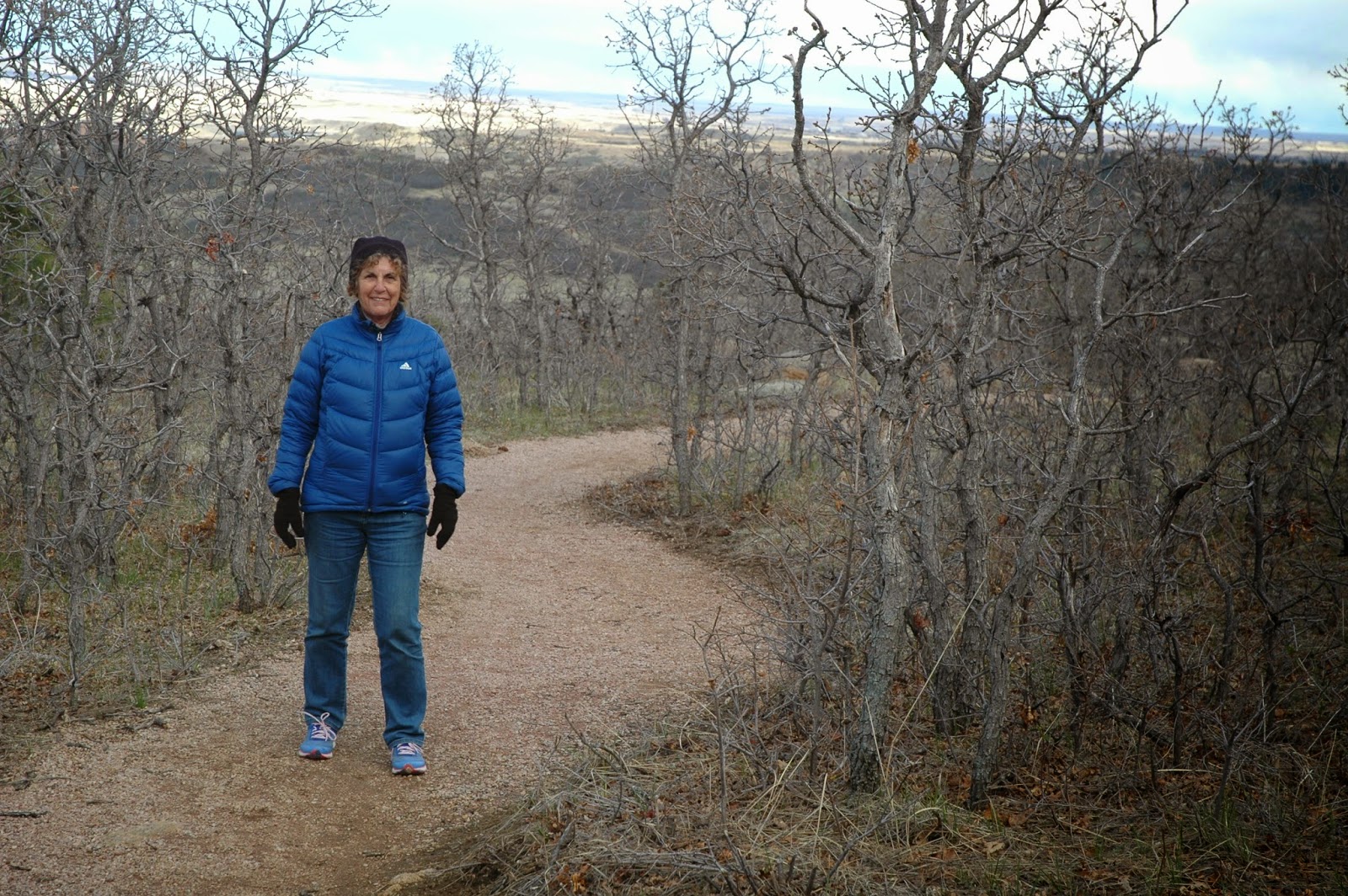 Our intent was to hang out here for one or two days until the weather moved on.  However, mother nature had different ideas and a strong low pressure cell hung over the area from here to Cheyenne, Wyoming for four days (so far)  We weren't too anxious to push north through the snow and wind with the camper in tow, so we have opted to see what Colorado Springs has to offer.

A brochure we picked up mentioned the Royal Gorge Bridge.  Recalling how my father-in-law had marveled at this bridge, we headed out for a day trip to Canon City where the bridge is located. We were not sure if it was a road bridge, a railroad bridge, or where it went from Canon City but we had nothing else on today's list.

Driving into the parking lot, this is what we saw. 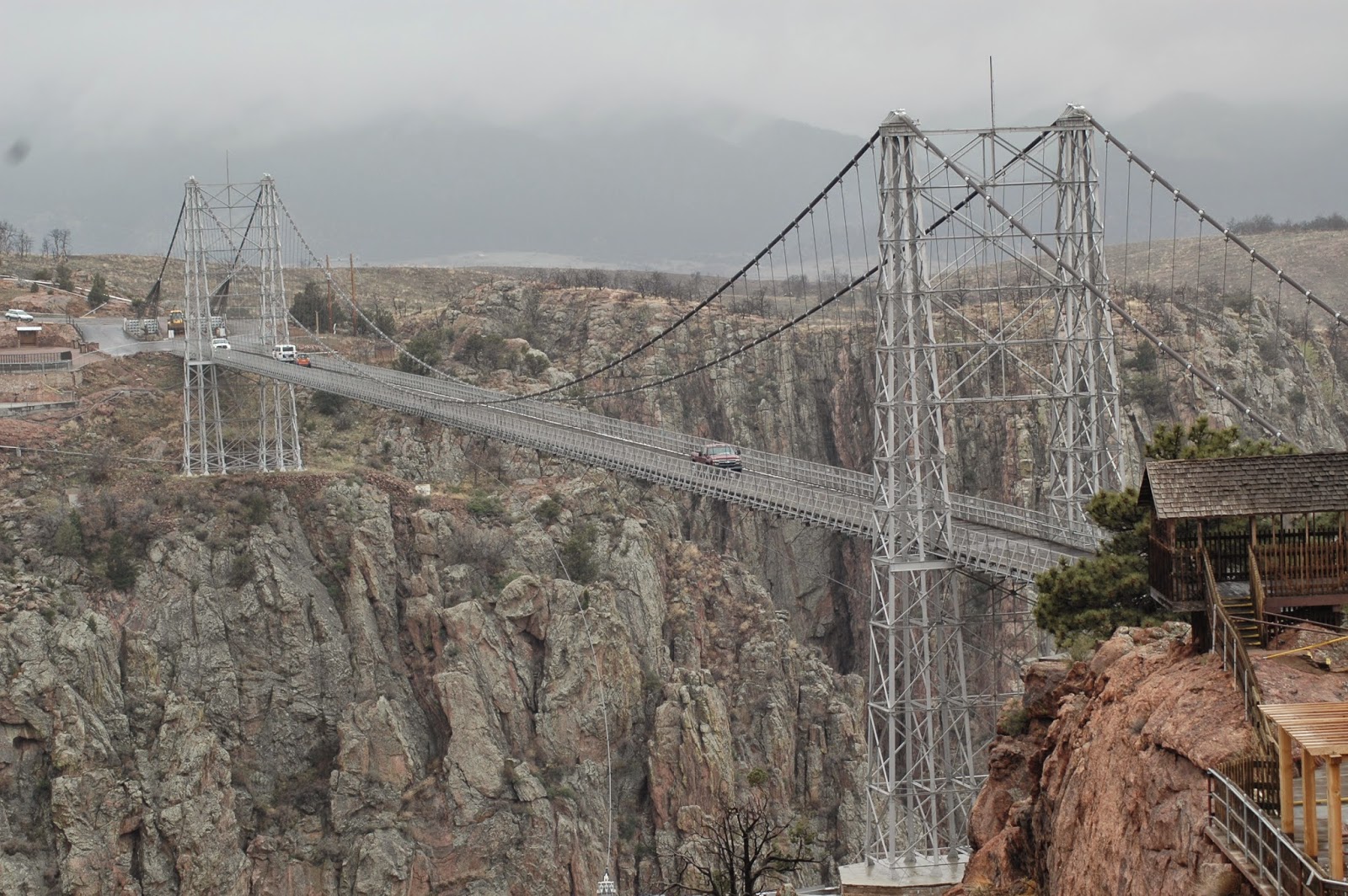 We still did not know where it went or what it was used for, but the visitors center answered many of our questions.  Fortunately for us, it was a cold, rainy, snowy day and there were only half a dozen people at the bridge. We were told this bridge was built and is used only as a tourist attraction. Last year they averaged over 1000 people per day coming here. 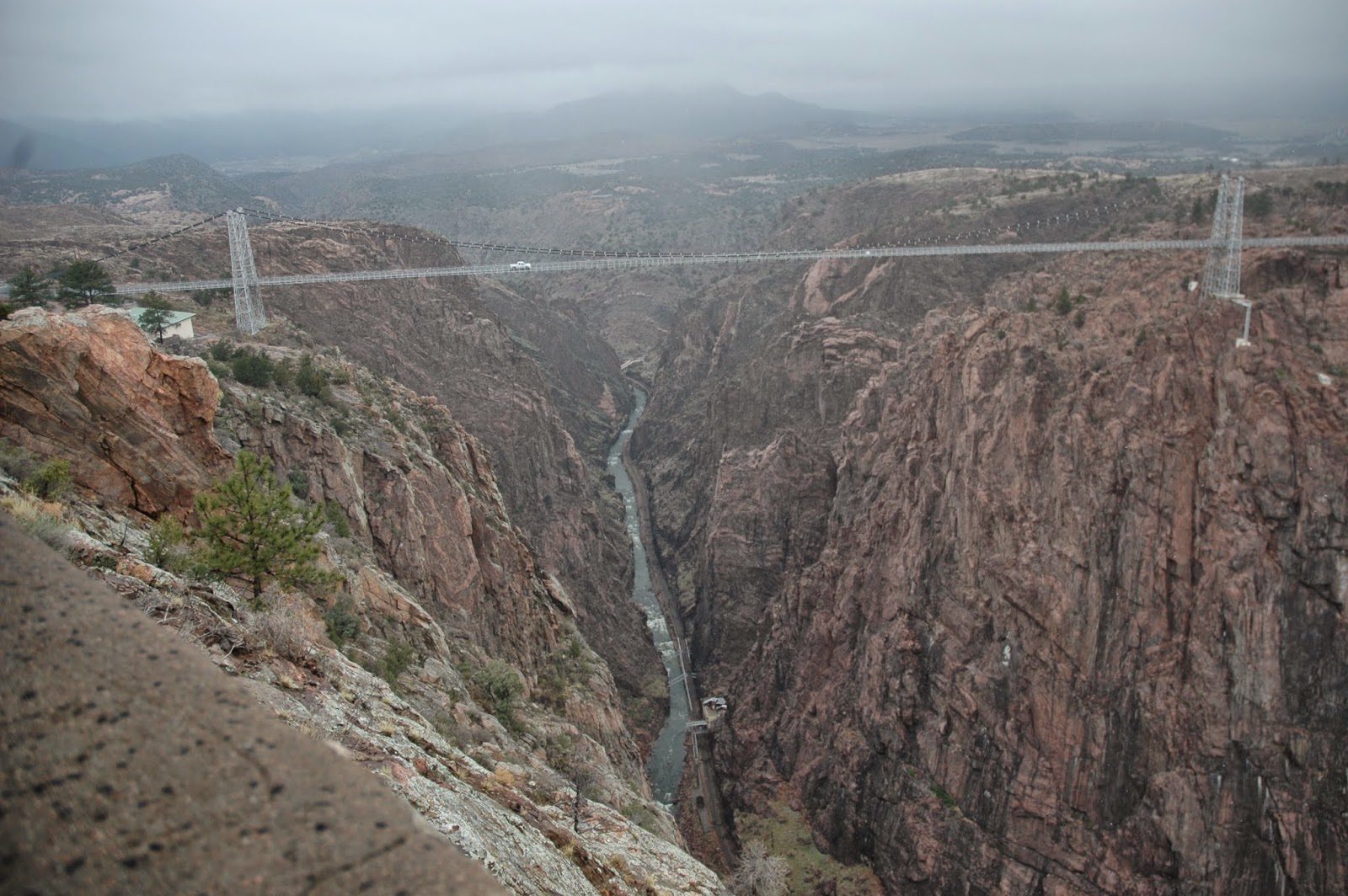 This shot was taken from the gondola ride, which is where you begin a tour of all the attractions the park has to offer. Yes, I must agree with Maynard, this is an amazing sight to see, let alone to have been accomplished in 1929. The 5000 acres incorporated in the park was deeded to the city of Canon by the Department of Interior, after a Texan, named Lon Piper, proposed building the bridge with the sole purpose of creating a tourist attraction.  Local legend contends that a fellow Texan bet him he could not build a bridge across the gorge, so he did.

The gondola takes you from the visitors center, 2,200 feet across the gorge, to several other attractions. 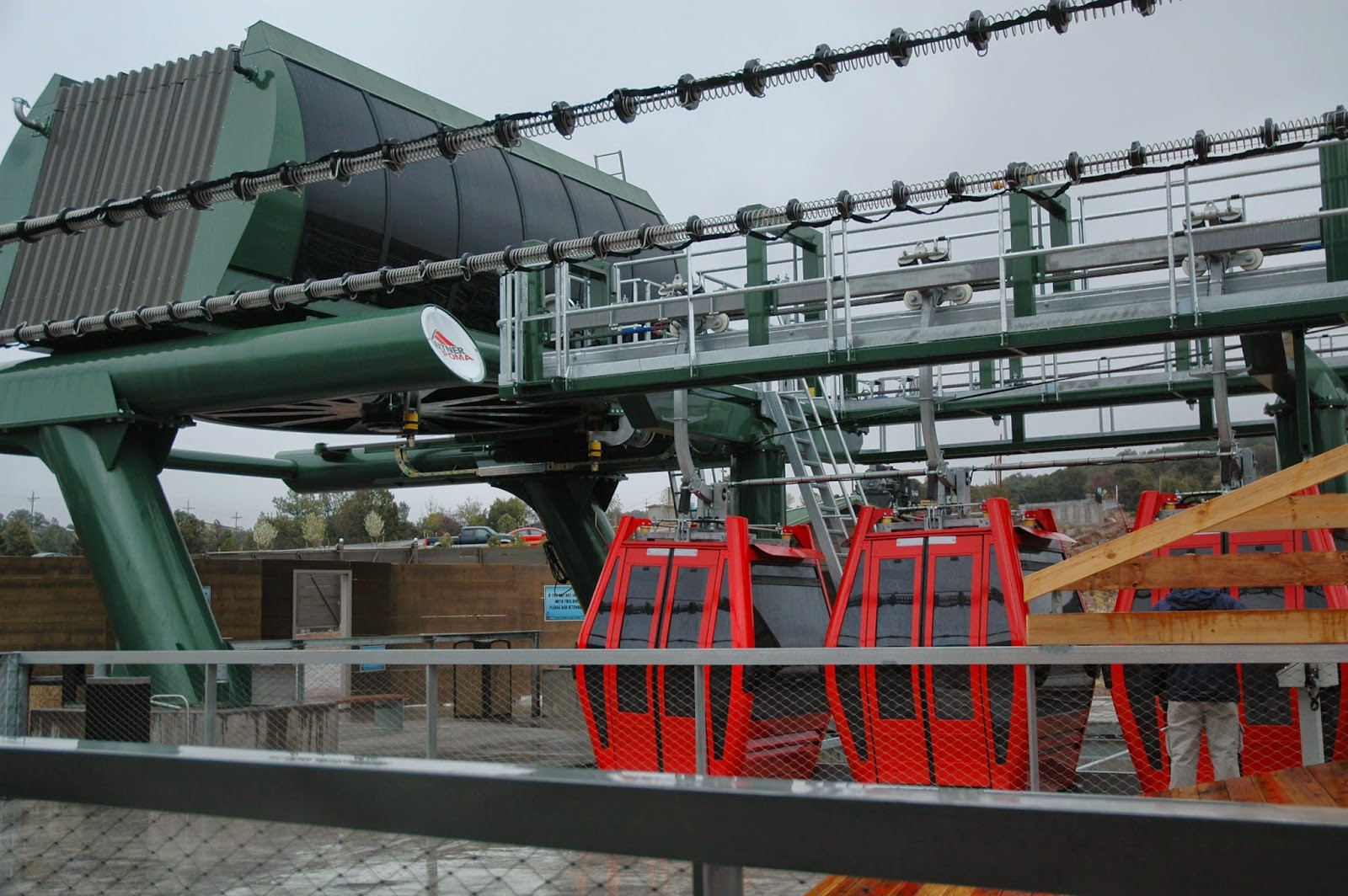 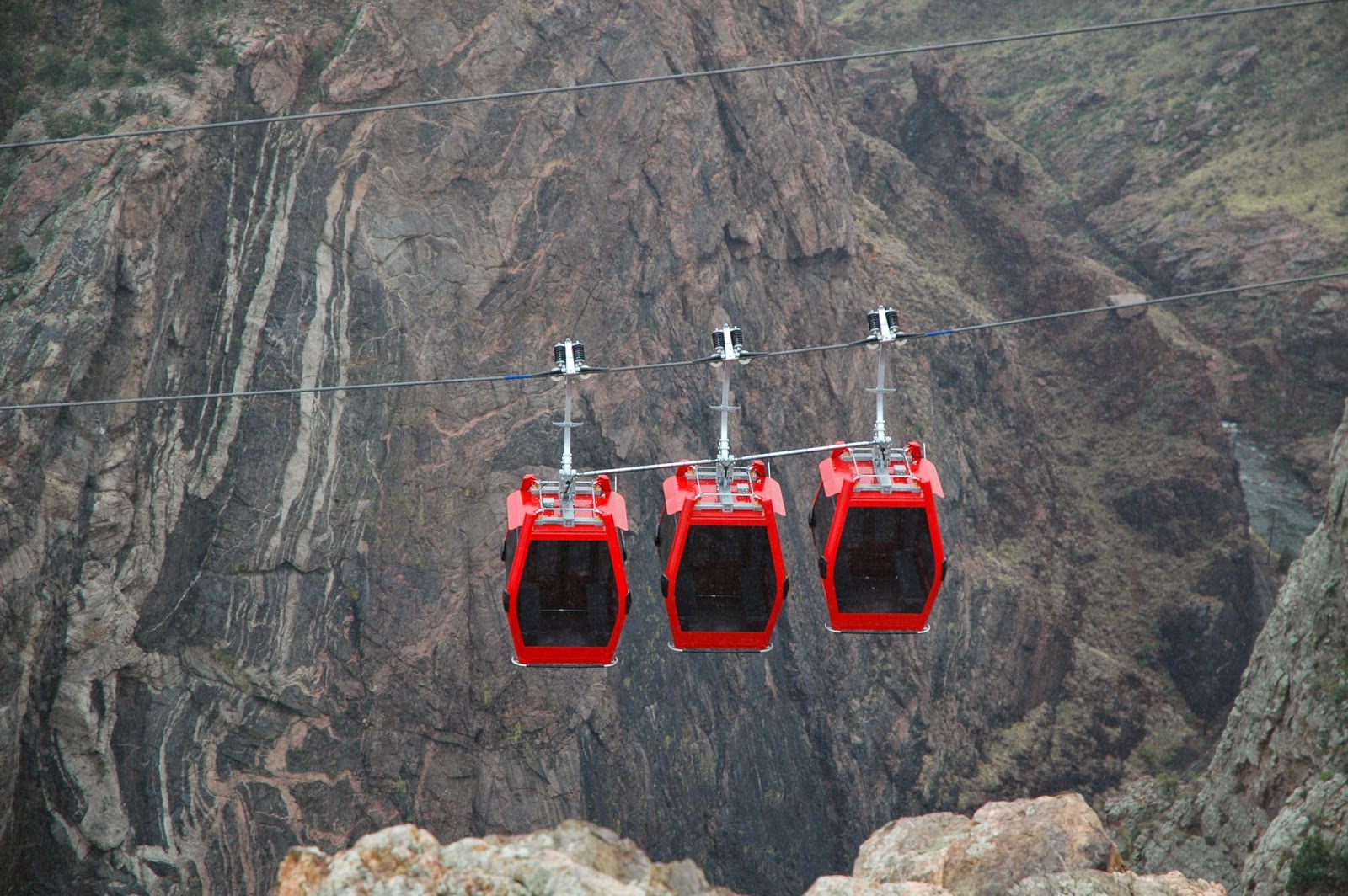 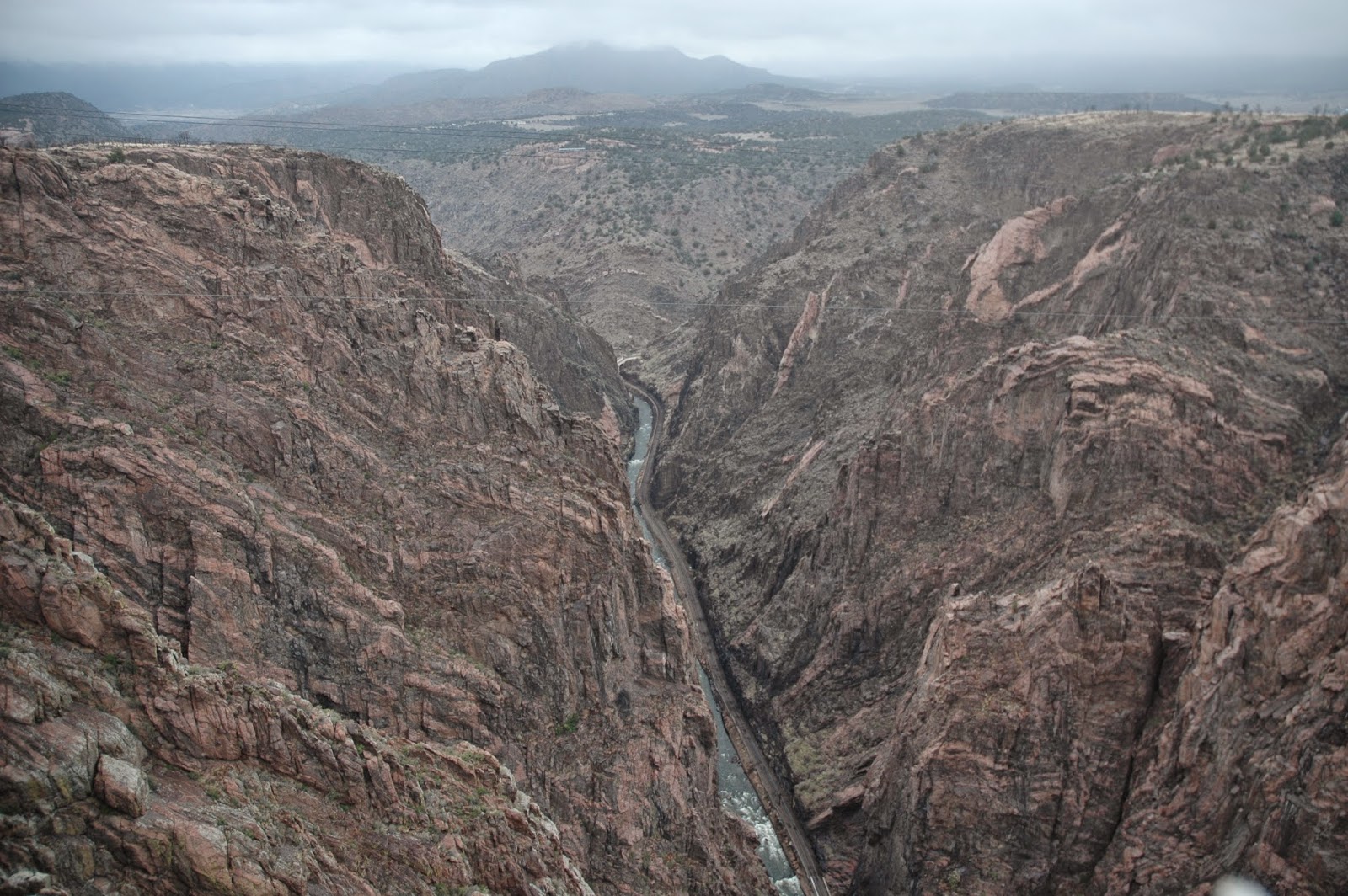 View of the river below, from the gondola.  A train track weaves its way through the gorge on a track that is partially suspended over the river.  You can take this train ride from the village of Canon.  Bet that is fun. 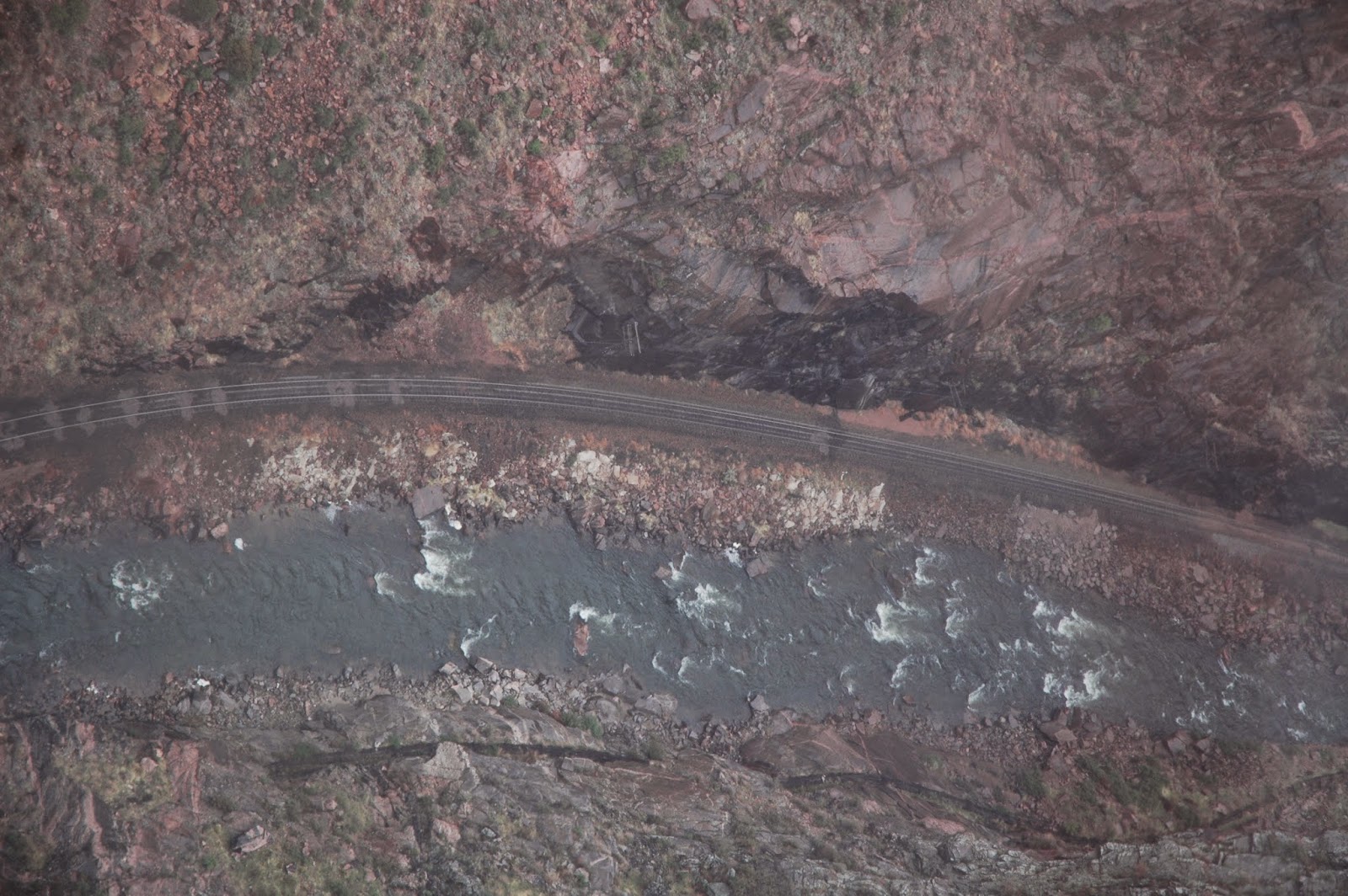 When you reach the other side there is a lookout for photography, a "Royal Rush Skyscraper", which is a ride that swings you out over the gorge while laying on your stomach, a new zip line, and a theater where they show a movie about the park.  Unfortunately, the Skyscraper and the Zip line were closed today due to weather.  I would love to have tried the zip at 30 miles per hour all the way across the gorge! 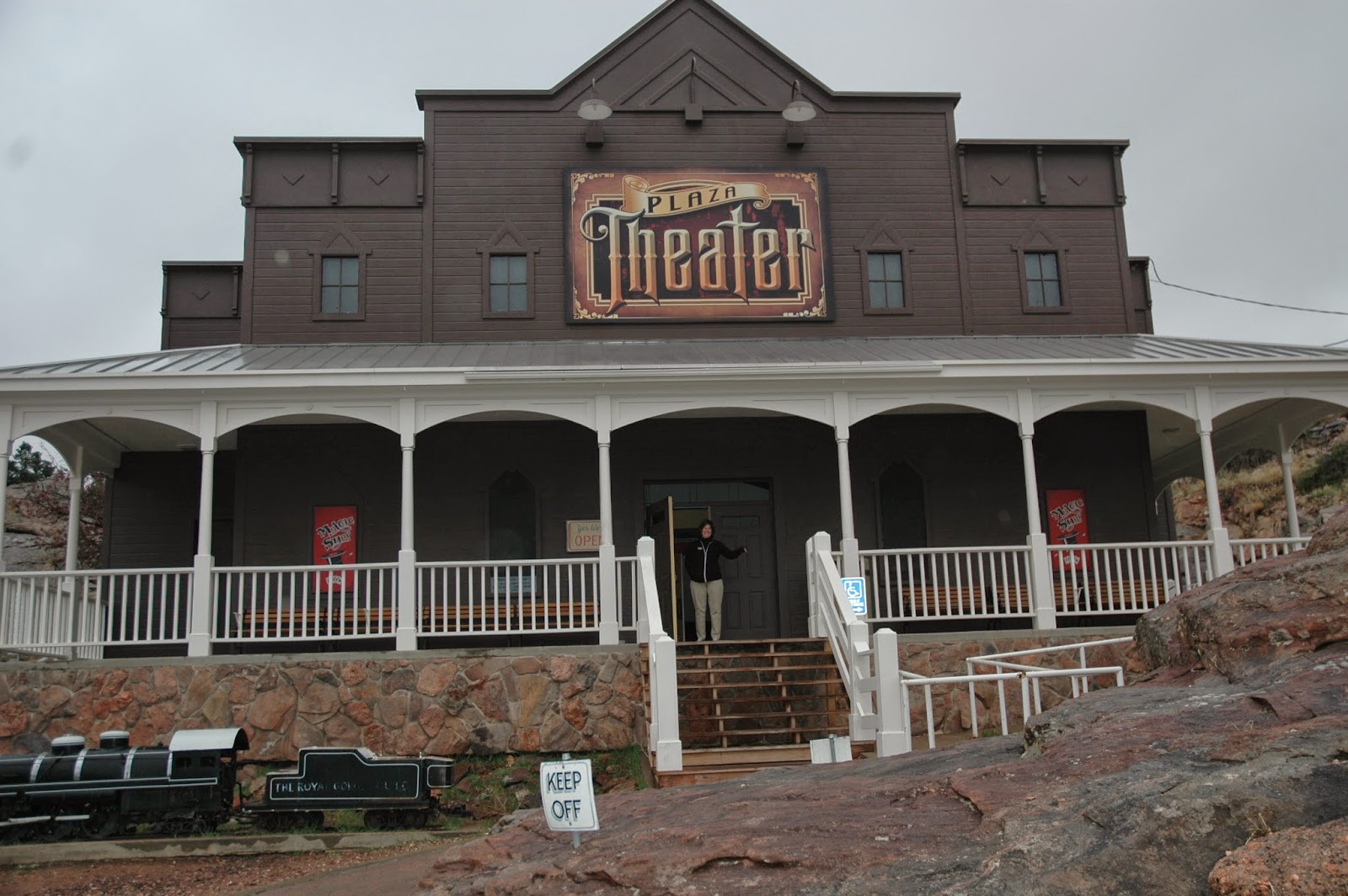 The Plaza Theater where the movie is shown.  This building was one of the only four out of 52 buildings left after a wild fire that destroyed most of this park in 2013.  The park just reopened in the fall of 2014, 14 months after the fire, with a new visitors center and a new updated gondola. Although they are open, there is still construction going on to replace more of what was lost. 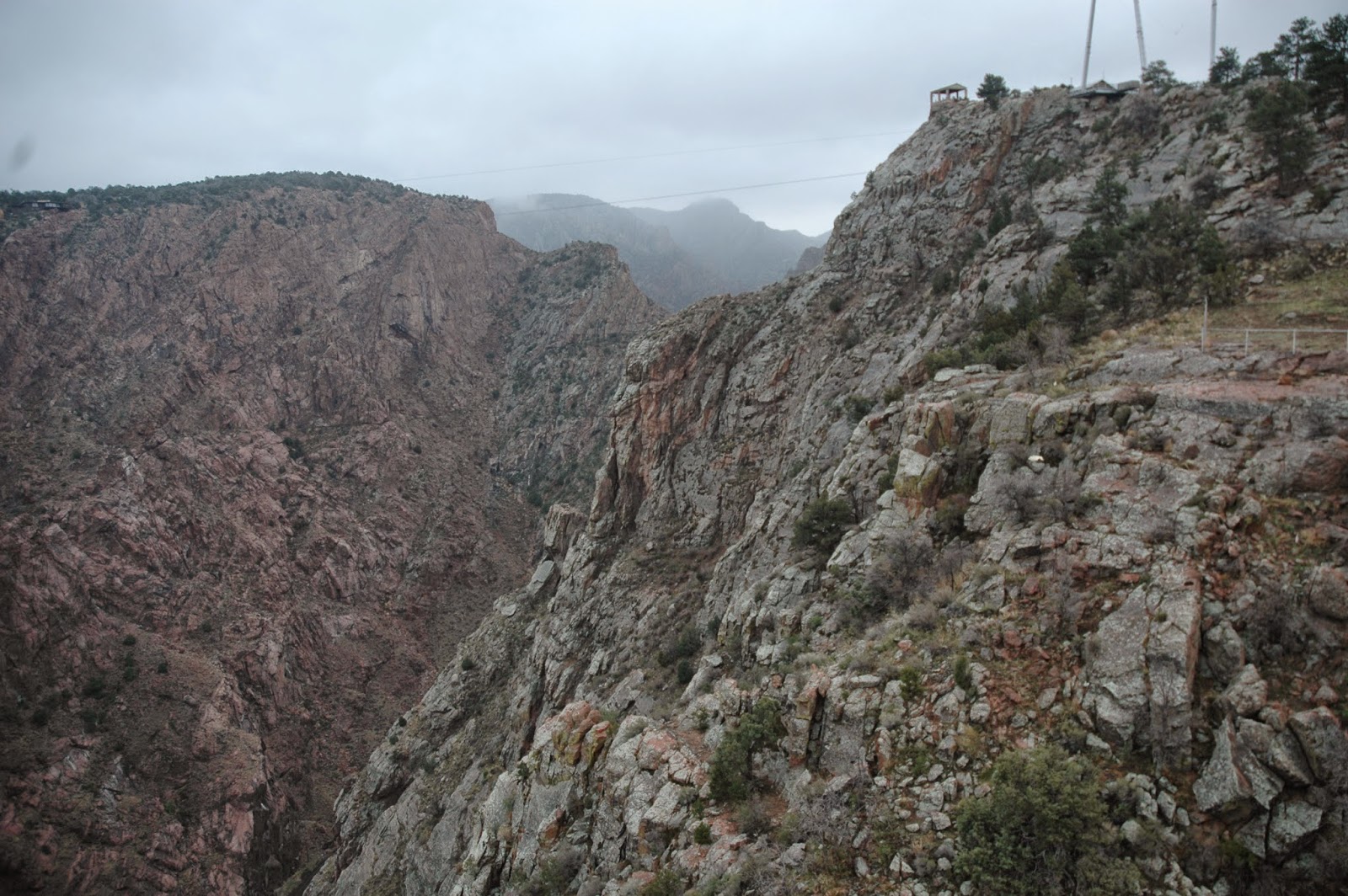 The overlook where you can take great photos.  The legs of the Royal Rush Skyscraper are visible next to the photo spot.  No swingers today. 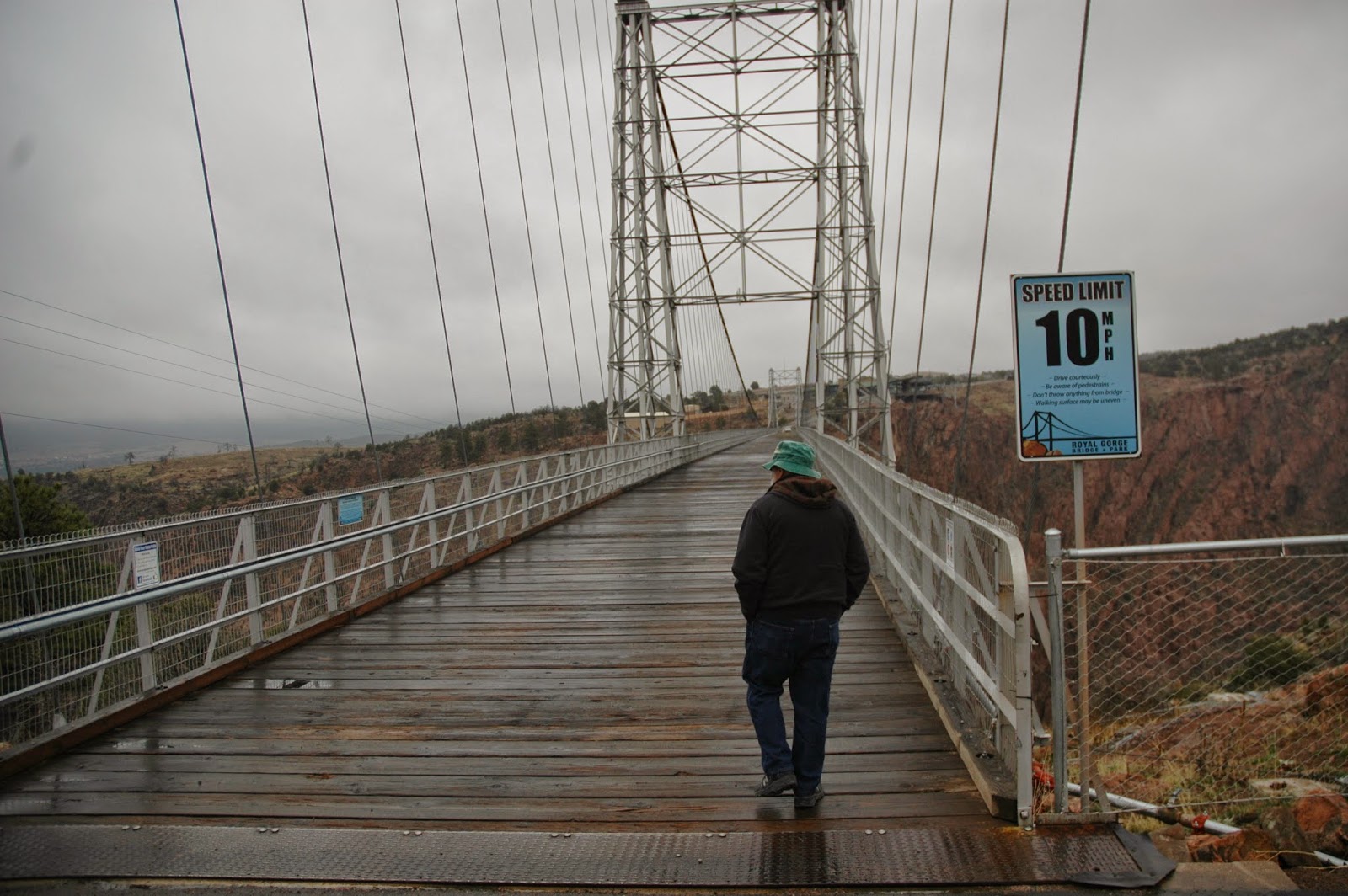 After riding to the far side of the gorge, you can return on the gondola, or walk over the bridge.  We decided to walk, since the rain had stopped (for awhile).  You can only drive over the 18 foot wide bridge after 5 PM, or get a ride with one of the shuttles that go back and forth.  During the fire only 100 boards of the bridge bed needed to be replaced.  We were told that if the bridge had been destroyed, the park would not have been rebuilt. 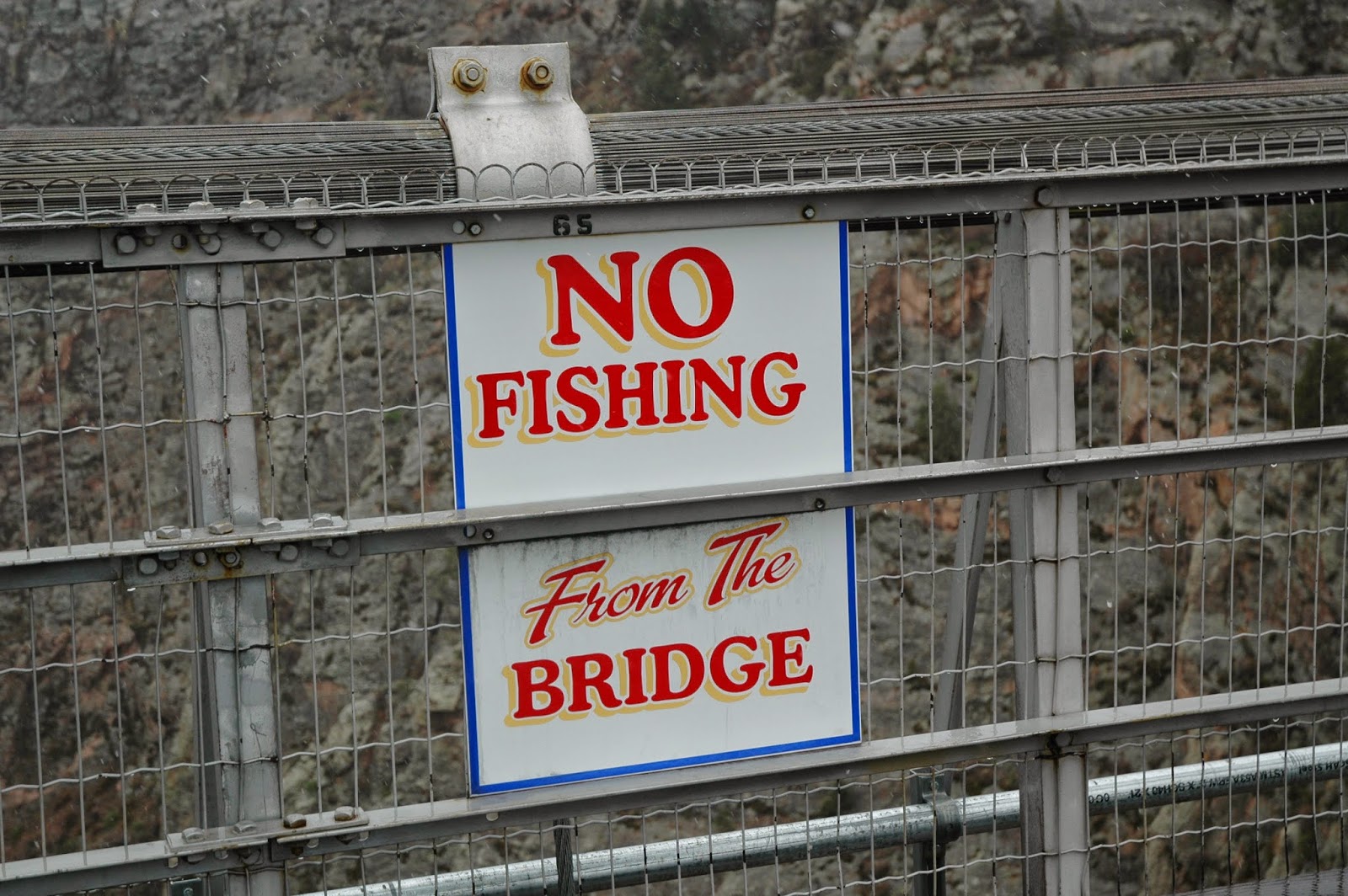 A bit of humor.  The bridge is 956 feet above the Arkansas River. 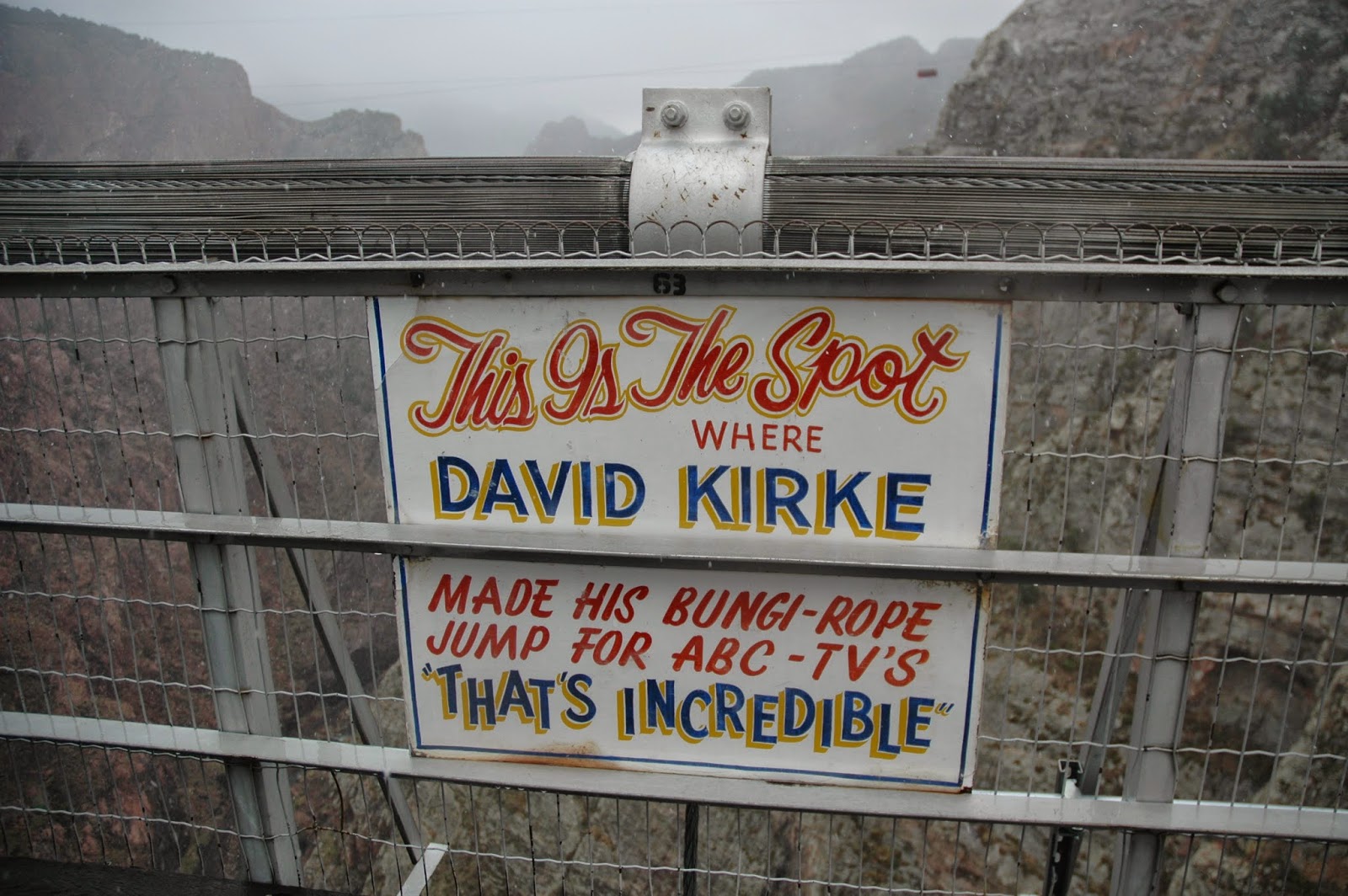 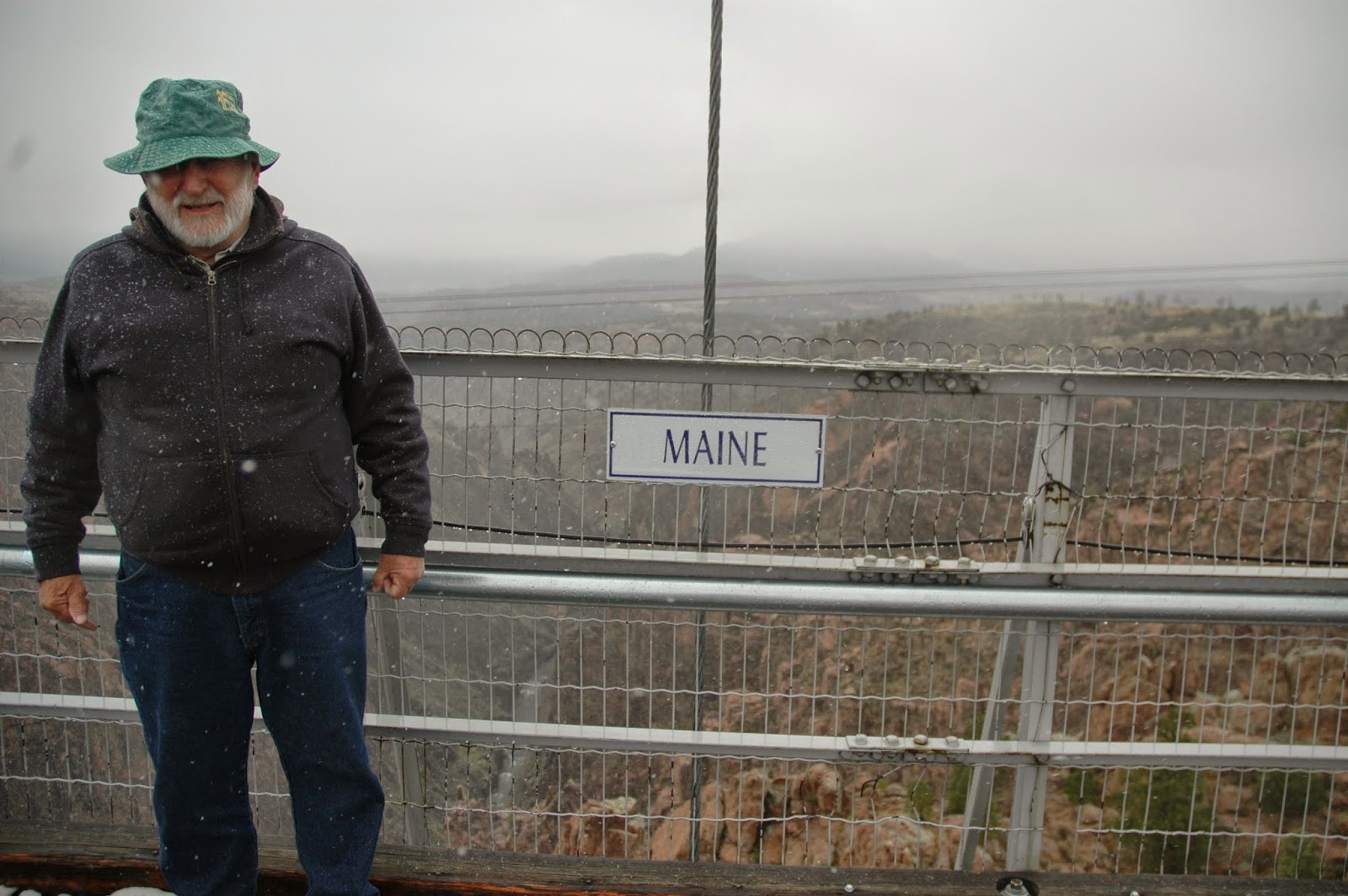 Along the bridge are the names of all 50 states.  So we stopped for a photo op.  (You can see it began snowing again) 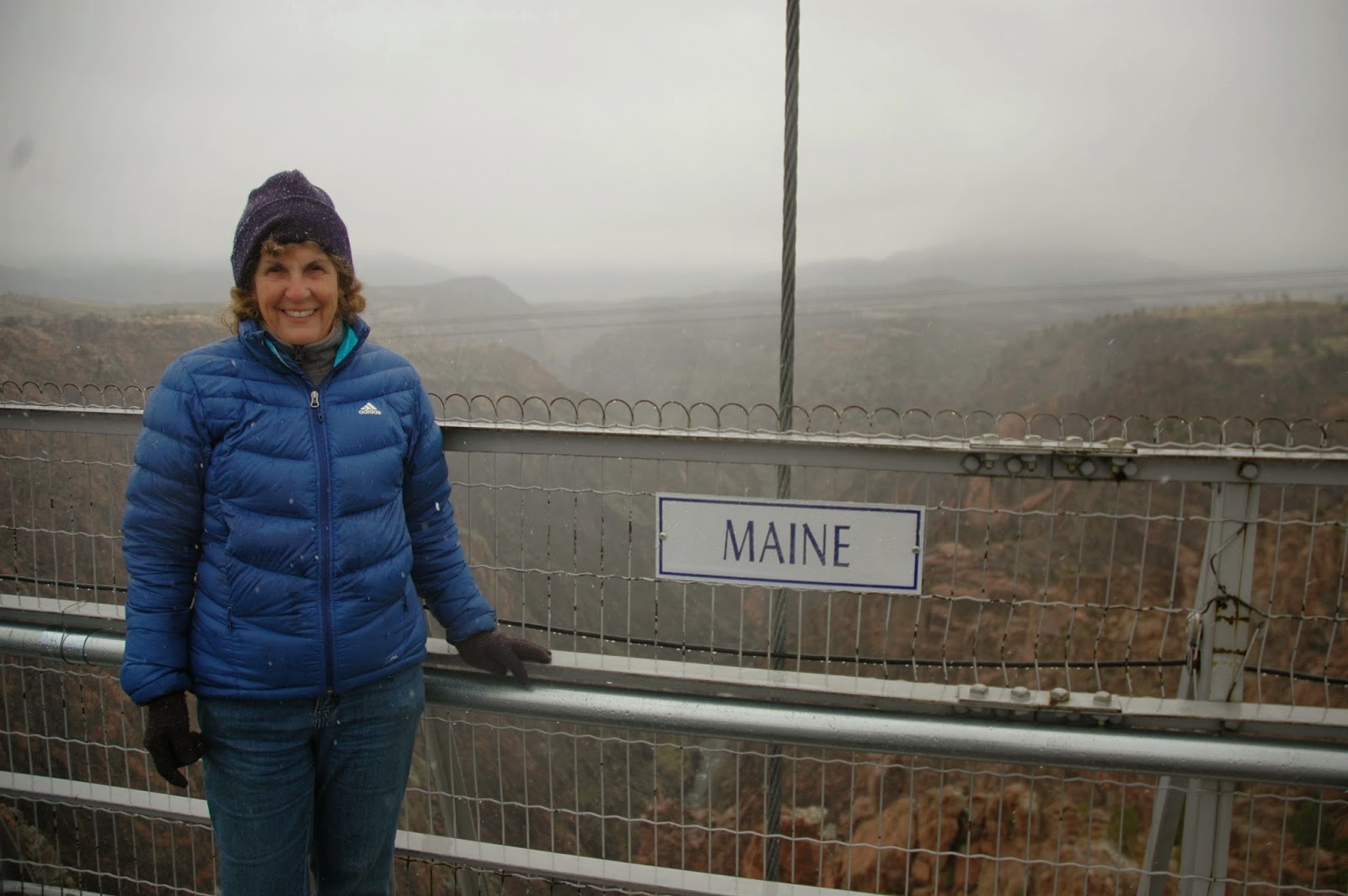 Back on the visitors center side of the bridge, the remains of one of the old gondola cars has been left so visitors can get an idea of how much damage occurred during the fire. 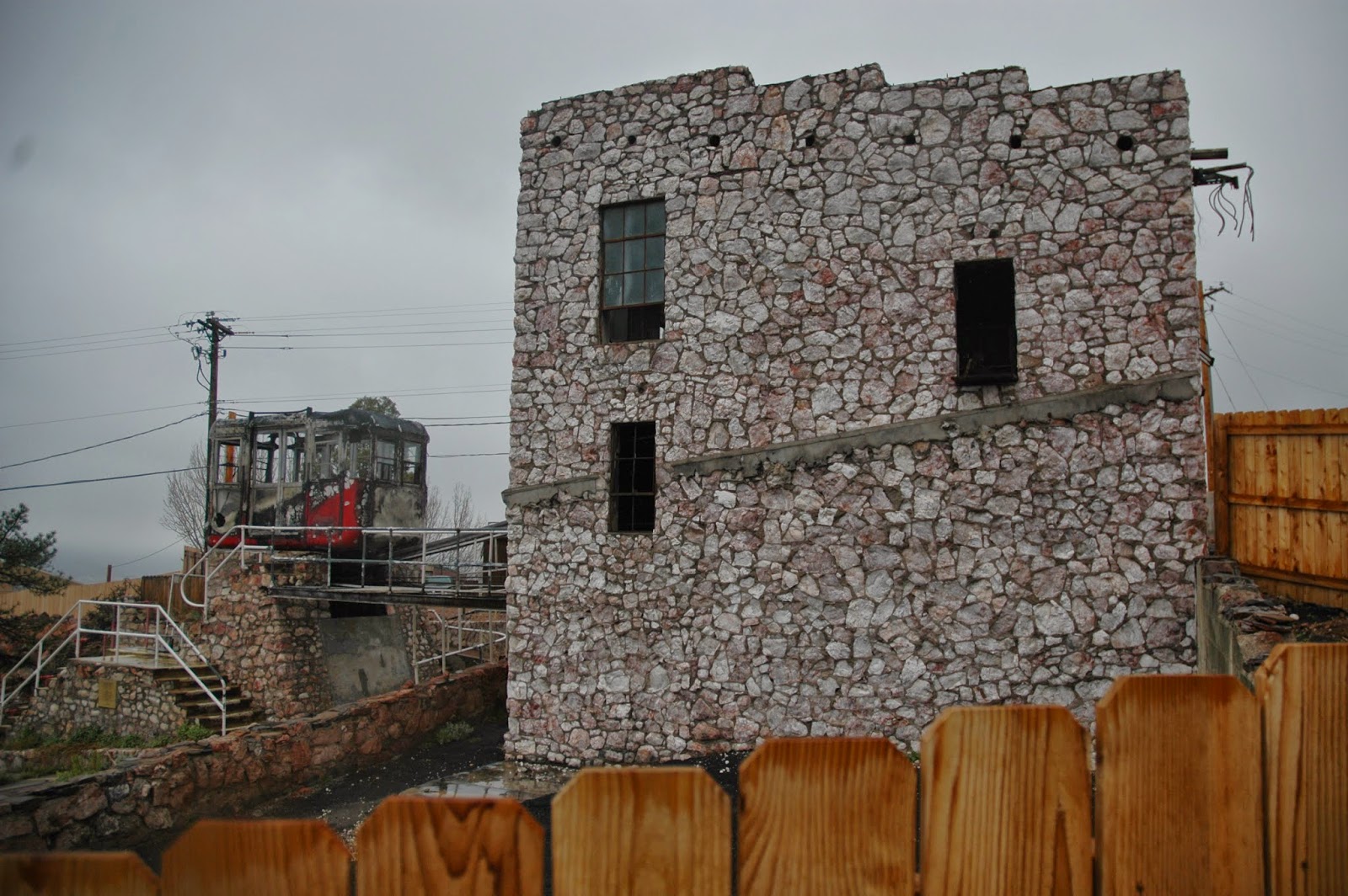 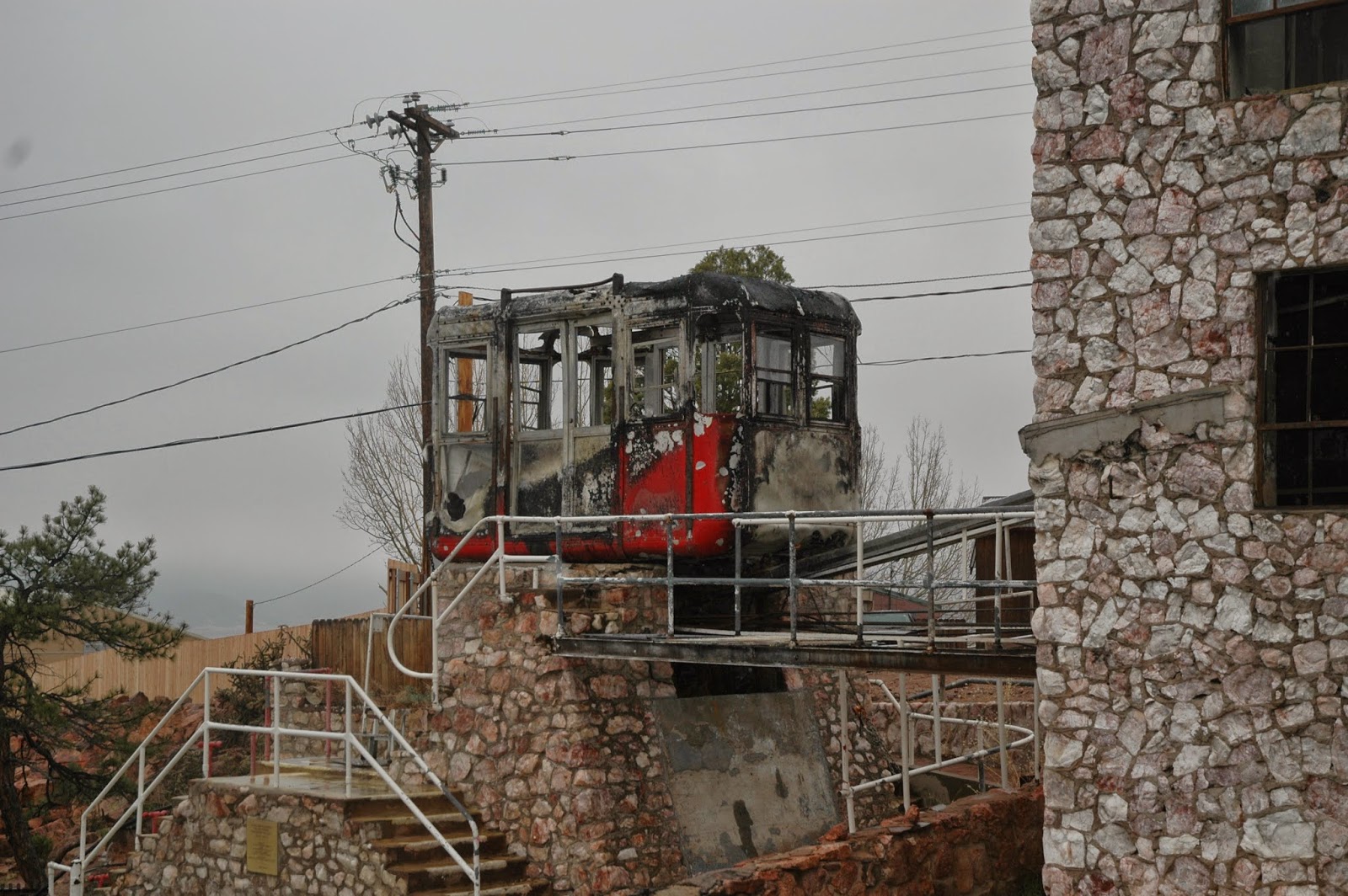 The fire was so hot it melted the cables for the original gondola.  A completely new one had to be built on the opposite side of the new visitors center.

Glad we got to do this attraction when there were so few people here.  Had a chance to have some long conversations with staff.  Fun place.  If you are ever in Colorado Springs, this is worth a trip.
Posted by cooktravelogue2007-8.blogspot.com at 9:17 PM