Before arriving in Nashville, we spent a couple of days visiting some friends in Jack's Creek, TN, which is about half way between Hot Springs and Nashville.  It was just about a year ago when we came to meet nephew Mike Cook for the Civil War reenactment at Shiloh and visited with the Huff's. Last year the weather was considerably warmer but we had an enjoyable visit anyway.

Nashville was rainy, windy, and chilly and enormously changed since we were here thirteen years ago.  For that visit we were celebrating Marlin's Dad's 84th birthday, and Linda and John Miles made the trip with us.  Perhaps it was missing Maynard, Linda, and John or maybe it was the timing, but the city seemed tired.   March is spring break somewhere for the entire month, so everywhere we went it was crowded and getting tickets for performances was tricky.

The Grand Ole Opry was sold out, but we spent an evening sampling the vast variety of Honky Tonks along Broadway, heard some pretty good music, and were able to get tickets to  "Flashdance the musical", which is due to open on New York's Broadway this coming summer.  Great talent, good music, with the story based on the old movie Flashdance.  Marlin doubts it will be a hit because the plot is predictable.

The performance was held in one of two auditorium's at the Tennessee Performing Arts building.  This venue also houses the Tennessee State Museum, which showcases the history of the State.  There was considerable space allotted to Andrew Jackson and James Polk, both  native sons of Tennessee.  The only picture taken during the three days we were in Nashville was of a guitar we thought James would be interested in seeing. 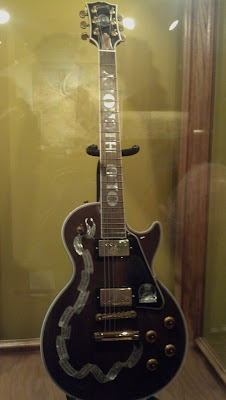 In 1998 a tornado felled 1200 trees on the "Hermitage", the home of Andrew Jackson.  Gibson Guitar built 200 limited edition guitars out of one of  the 275 year old Tulip trees.  The mother of pearl ribbon, which lists significant events in Jackson's life, was only on the first three built.

After a seven block walk, in wind, hail, and one spill on icy pavement, when the Flashdance performance ended, we were glad to be on our way the next morning to the Smokey Mountains and a promise of 60 degree weather.