Audubon Corkscrew Sanctuary and Shark Valley in the Everglades

Our Dixmont friends, Mary and Mike Hartt, drove over from the east coast for a whirl-wind two days of visiting and touring. Our first stop was an afternoon visit to Audubon's Corkscrew Swamp Sanctuary. This amazing 13,000 acre wilderness preserve contains the largest stand of virgin bald cypress in North America. Some of the trees are over 500 years old. Fortunately, access into the "swamp" is along more than 2 miles of raised boardwalk.

The walkway curves and twists through wet prairie, cypress forests and marsh land. 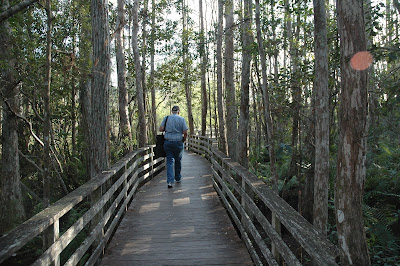 Mike starting on the hike 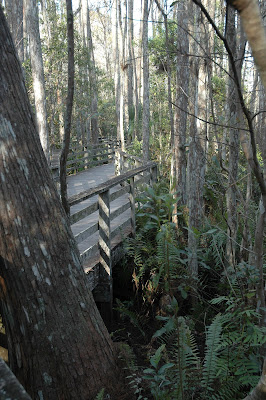 A few of the twists and turns. 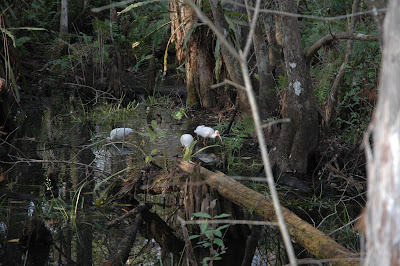 A small group of ibis foraging for food below the boardwalk. 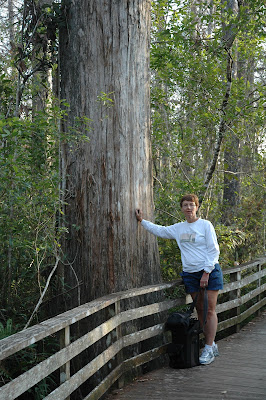 One of the many large cypress (and Mary) 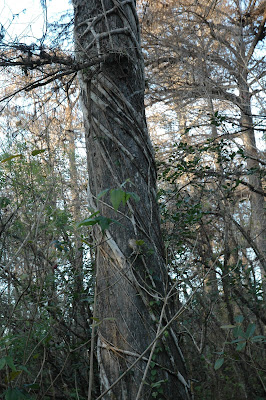 The strangler fig vines begin at the top of the trees when birds drop seeds into epiphytes or crevices in the upper branches. Then the vines grow down and root in the ground. They don't really hurt the trees, they just look like they are "strangling" them 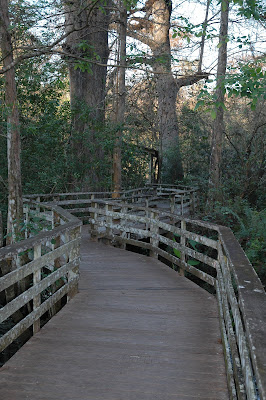 I could not resist taking pictures of the boardwalk's jigs and jogs. They are very appealing. The Sanctuary was founded in 1954 when timber companies began logging the giant cypress. A joint effort between concerned citizens and lumber company owners resulted in both purchase and donation of timber land. The area also contained the largest rookery of storks and egrets, inhabited by approximately 8 to 10,000 birds at the time of the purchase.

The original boardwalk, totaling 5,600 feet, was completed in the fall of 1956, the first one thousand feet in 1955 and the rest in 1956. When it crossed the first and second lettuce lakes, all in the heavy swamp, the work was really laborious. Sandy Sprunt described it: "Crossing the second lettuce lake, for instance, was the most difficult part of the whole boardwalk to construct. Poor Hank, who was a rather short person -- I think he stood about 5'6" or 5'7" -- was up to his chin a lot of the time crossing that, whereas the rest of us had a little more altitude. That was the only place we ever ran afoul of an alligator, too. There was a big female that lived in there and we kept a wary eye out for her. But Hank and I always felt that the alligator was at a distinct disadvantage in attacking a Whidden because the Whiddens had lived off the swamp and trapped and taken furs and alligator hides for all of their lives and we figured it was unequal difficulties for the alligator -- she would have been overwhelmed very shortly. As it was, we didn't really have any trouble." (Sprunt interview)
I don't think I would have volunteered for that job! 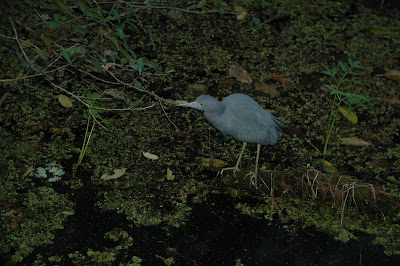 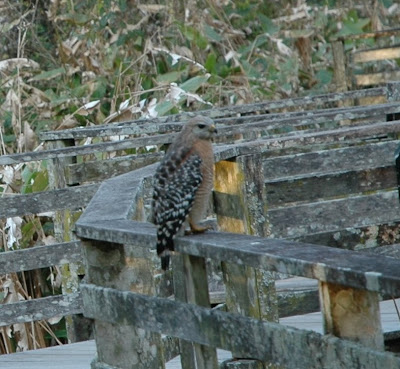 This Red Shoulder Hawk sat very still for pictures. Mary got a beauty with her big lens. I hope she will post it on Facebook.

Mary and I went back again the next morning at 7 AM when they opened, expecting to see
more birds and wildlife early in the morning. We did talk with several very knowledgeable docents along the way and had a magical sighting of a painted bunting, several sleeping ahningas, and a few warblers but no hawks or wading birds were awake yet.


The afternoon took us to Shark Valley in Everglades National Park. Shark Vally provides a 15 mile walking, biking, or tram loop trail through the sawgrass prairie with an observation tower at the halfway point. The two hour narrated tram tour is staffed by a park ranger or a concession naturalist. This is the third time we have taken this tour and each time we hear new facts about the Everglades. Each narrator seems to have a different interest which they highlight on their trip. This time our guide was a Florida native college student studying in New York. His interest focused on the ecology of the land and soilin the Everglades. His great sense of humor kept you interested in the mud, the vegetation and the water. 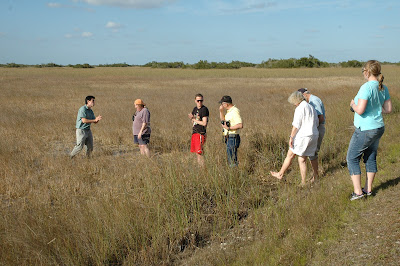 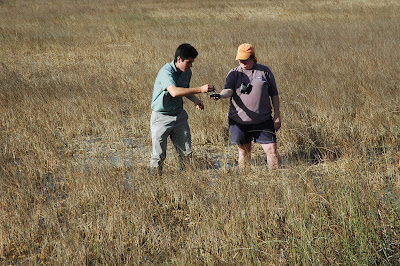 He wanted a visual of how the water flows through the porous limestone rock into the deep aquifer that supplies Florida with fresh water. 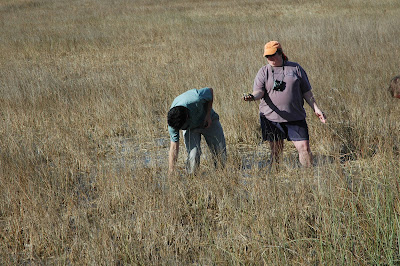 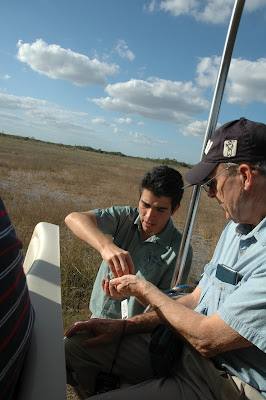 Our naturalist shared a soil sample he called periphyton. He explained that periphyton is a complex mixture of detritus, algae, microbes and a few other things that live below the water and serve as a food source for many life forms. The sample felt like a sponge rather than mud. 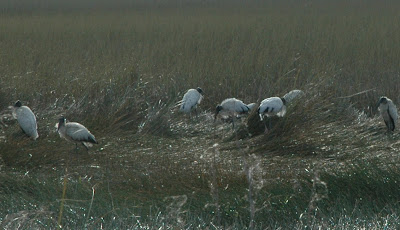 We saw abundant wildlife, including several flocks of storks. Sitting in the middle, I had little chance to get any pictures, but when we stopped here I was able to stand and get a quick shot. These majestic white birds have a black tipped wing span of 5 to 6 feet long and are exciting to view in flight. 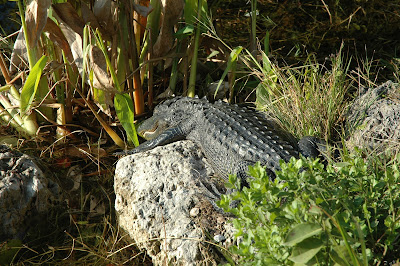 This sleeping darling was just off the walkway up to the tower, where 7 or 8 of his relatives were sunning themselves. 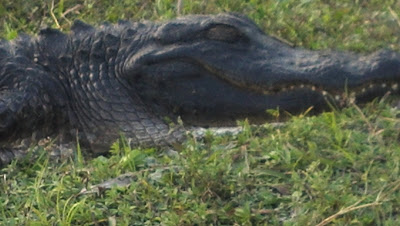 When the tram tour ended around 5 P.M., we walked back along a canal that ran beside the pavement. The bank down to the water faced the setting sun and five or six alligators were catching the last warm rays before they headed out for night hunting. This big fellow was definitely dreaming about supper.

The battery in my camera died. I took a few shots with my phone, but the quality was so poor I am not posting them. We stayed until dark watching many flocks of ibis, herons, ahningas, and egrets fly in and squabble for roosting position.

Anyone interested in birds would not go wrong making a special trip to the everglades. The numbers and variety of birds, both large and small, is hard to comprehend without being here. Yet the numbers of wading birds in the Everglades has declined 93% since the 1930's and the endangered wood storks have declined from 5000 in the 60's to less than 500 nesting birds in 1980. One docent at Corkscrew said they have not rebounded but breeding pairs continue to decline in number each year.
We plan to return to the Everglades again this winter. There is much to see with a fully charged camera battery.