Blue Springs State Park is noted for the large numbers of Manatee that come here in the winter. When we arrived all I knew about manatees was that they were big, slow, friendly, and were endangered. All I knew about Blue Springs was what is written on their web page. We picked a great time to be here. Not only are there between 40 and 50 manatee wintering here, but this week they released three animals that have been in captivity for various amounts of time.

The spring itself is fascinating. Being a true artesian spring, it pumps one hundred million gallons of water out of the ground per day. That number boggles my brain. Most of Florida is limestone, which allows rain water to seep deep down into the ground. This water, which is purified as it travels underground, pushes up through cracks and caves till it reaches the surface. Here at Blue Springs it erupts from a cave, and beginning at the spring, runs in a stream 6 or 7 feet deep, then flows south about ¼ mile, into the Saint John river. The water is crystal clear, and a constant 72 degrees, which is why the manatee come here. It is also adjacent to the St John river where these huge animals go to find the 100 pounds or so, of vegetation they need to survive each day. 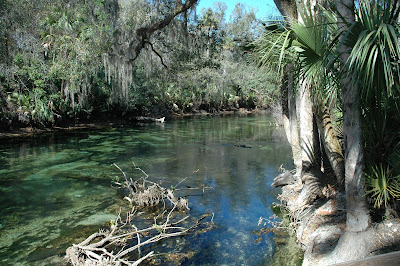 The spring run off. 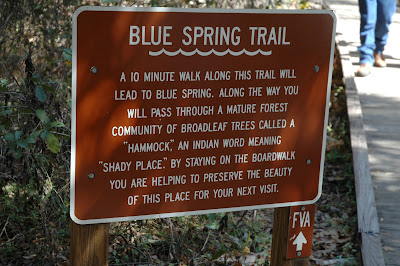 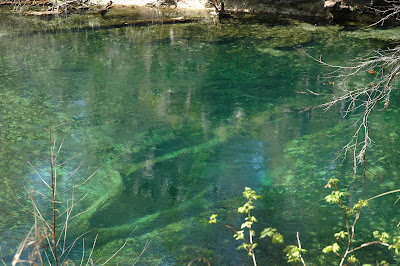 The cave where the spring originates. 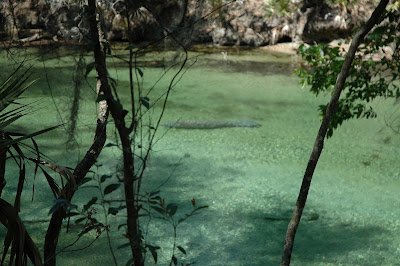 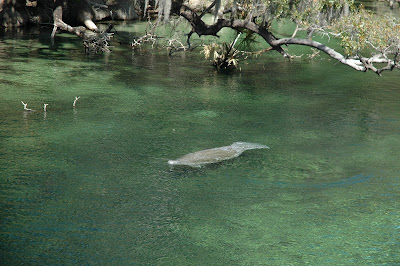 The first day we explored the ¼ mile boardwalk and were very excited to see about 4 or 5 manatee, lounging on the bottom wherever the sun was shining. When we went down to the boat landing, however, we saw a group of about 20, right where the spring run-off meets the St John River.
The Ranger program provided us with a nice overview of the lifestyle and habits of these big beasts, who are also called Sea Cows. First off, they are mammals and their nearest relative is the elephant, believe it or not. They have marrow-less bones, four toenails on their front flipper and are covered with a thick, rough, gray colored hide that sprouts coarse wiry hair. Calves are about 60 pounds when born after a 13 month gestation. They stay with their mothers and are nursed for 2 years, although they do begin eating vegetation when they are a few months old. Manatee can only tolerate warm water. They stop eating when it is below 68 degrees, and cannot survive if the water is below 60 degrees. 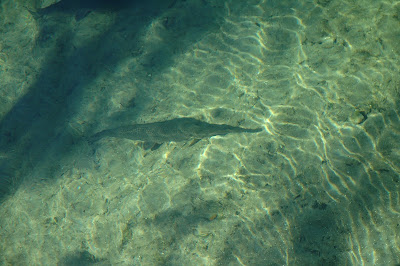 A Florida Gar. There are lots of these in the spring water 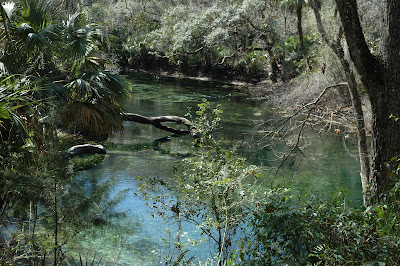 The rangers keep totals of how many are at Blue Springs daily and annually, as well as how many fatalities occur each year. Last year (08) there were 90 killed by collisions with boats or entanglement with fishing gear. Blue Springs has identified 274 different manatee here at Blue Springs. There is a yearly count, similar to the Christmas bird count in Maine, which sited 3,807 manatee this year in Florida. The rangers were excited because this was up by around 300 from a year ago. Of course the count is only an estimate, which can change if the wind picks up or a cloud passes over. 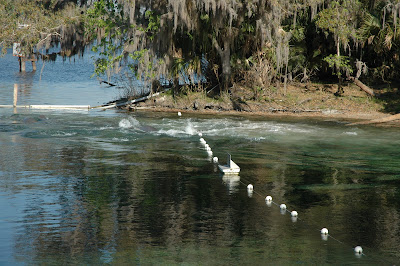 This is where the spring run-off meets the St John. The river is on the top left

The first release occurred on Tuesday, the 24th. It was scheduled for 9:30, but due to a traffic accident on the highway, they actually arrived a 11:00. The animal being released had been a twin born here at Blue Springs around 2001. Twins are unusual for manatee, about 1.8% of births, and one of them is often abandoned. This pup went to Sea World until stabilized, then was transferred to Disney Animal Kingdom, where he has been living until today under the name of Bach.
This guy arrived in a Ryder Rental truck and was unceremoniously hauled to the water in a rubber sling carried by 10 people wearing identical Disney T shirts. Before he was released into the water, a radio collar was attached to the tail. The collar included a float, which helps track their movements and habits. We also got lots of great shots of photographers backs - good news coverage for Disney. 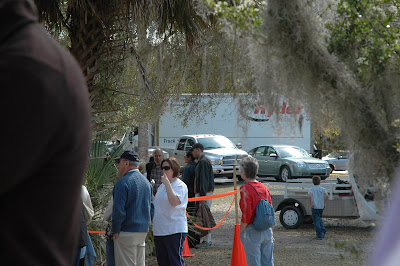 The manatee was transported in this Ryder truck 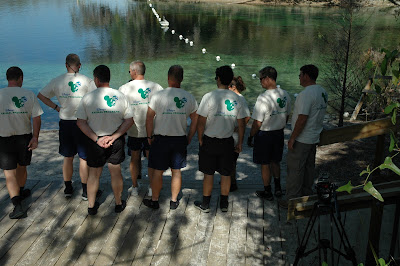 The Disney guys getting a run through 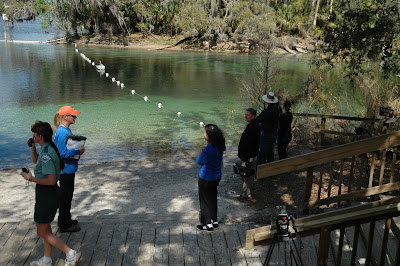 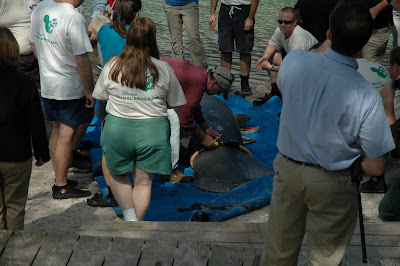 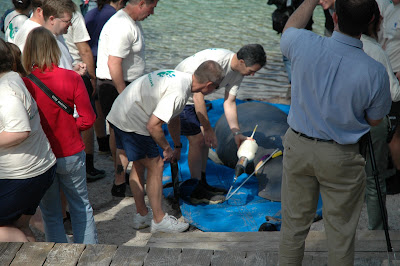 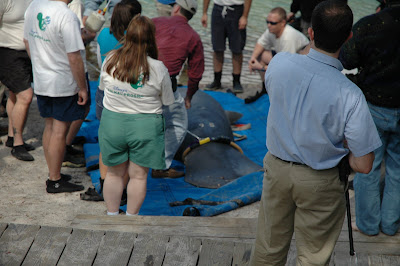 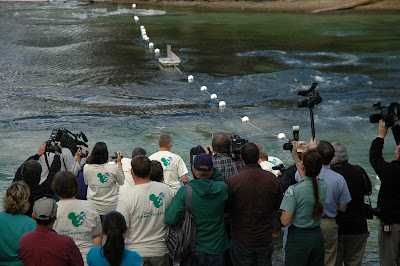 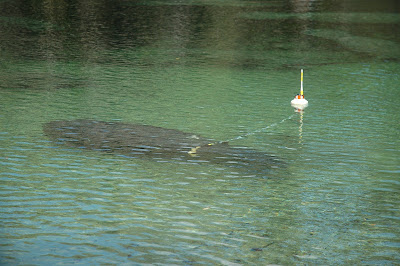 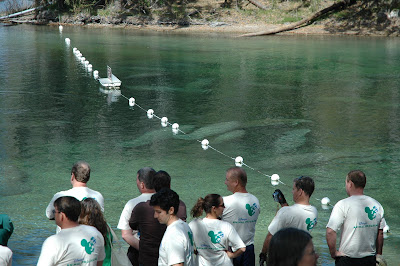 The other manatees come to Bach to check him out, or say hello 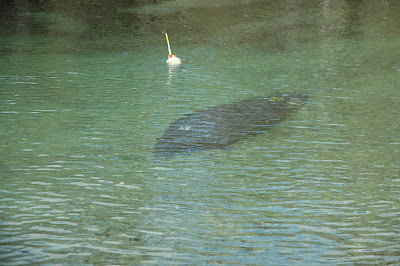 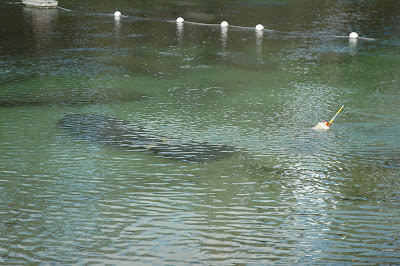 Bach and his new friends
On Thursday, the 26th, the scene was more impressive, probably because one of the manatee being released that day weighed 3000 pounds. She arrived in a solid sided container that was hoisted off the truck, over the trees, and into the water by an enormous yellow crane. Rita, as she is called, has been at Sea World since 1982. She was an adult when found with her flipper tangled in fishing line. This resulted in the loss of that flipper. Sea World determined that she was ready to be released after 28 years there. Our guess is that the state has cut funding for the project and now Rita is on her own. 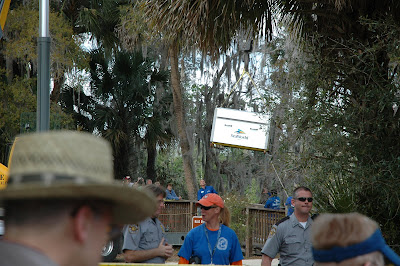 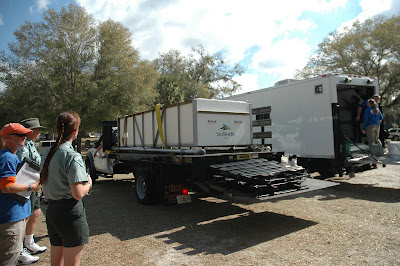 Arrival on a flat bed truck
The second release, done on Thursday, was another abandoned twin picked up in 2001. Amber, as they named her, was also hoisted with a crane, although, she came in a box truck and was moved in a rubber stretcher.
Each of the three releases were outfitted with a tail belt that contained a GPS and an attached buoy so they may be tracked for the next year. The rangers make sure they are eating, moving to warm water in winter, and do periodic checkups to make sure they are healthy. I would think dragging that buoy around would drive them nuts, but at least it is not permanent. 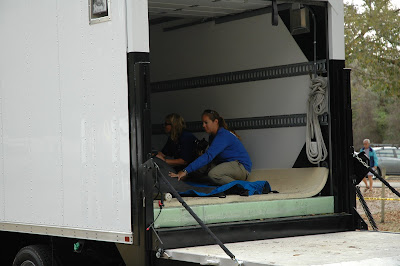 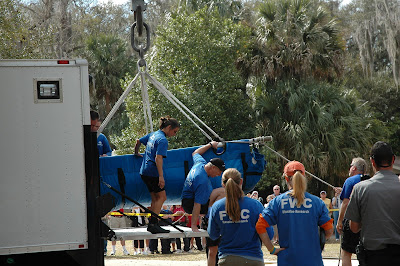 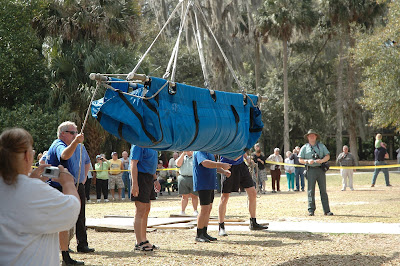 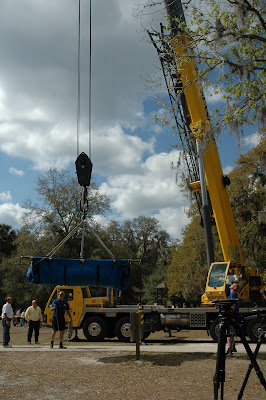 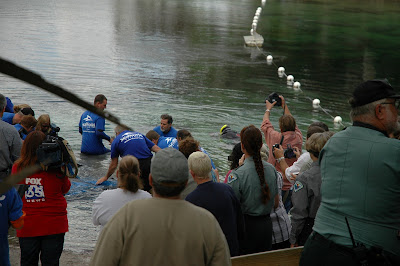 Free at last
I had been very excited about all this manatee activity, but I talked with Julie the next morning and she had been at Homosassa Springs, on the Gulf Coast, and was actually able to swim with the manatees. Here at Blue Springs they close the swimming because it is breeding season and they don’t want that process disturbed, but at Homosassa Springs, when the manatees swim out of the restricted area, people are able to get into the water from boats. Julie sounded so excited and it seemed like the most fantastic experience to be right in there with these gentle animals. Wish I had been there, but at least Julie did send me the two pictures below. 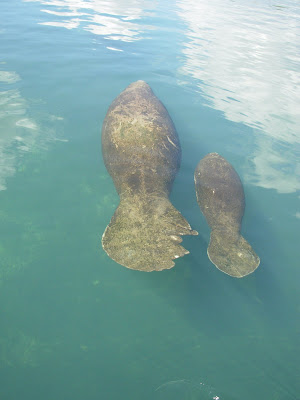 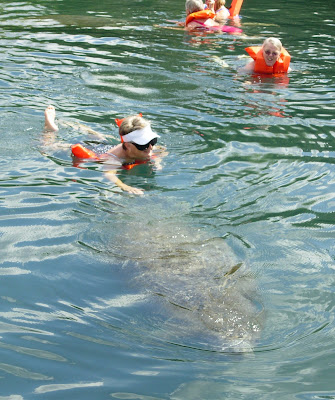 Is this great or what! Julie s rubbing the back of a manatee. She said it actually rolled over so she could then scratch its belly.