On Sunday February 15, we moved from Fort Myers in south west Florida, to Tomoka State Park, in north east Florida; from the Gulf to the Atlantic. We spent one stop-over night in Arcadia, Fla. Arcadia is about an hour north east of Ft Myers and being inland from either coast, it is rural farmland. The next day we traveled directly east, through cattle and horse country, passing just above Lake Okeechobee, then north on Route l to Tomoka State Park. The park is on the western side of the intercostals waterway, formed by the Tomoka and Halifax Rivers. By crossing one bridge, in five minutes, we could reach Ormond and Daytona Beaches on the Atlantic.

We really liked this park. The campground consisted of spacious wooded and private sites, a new boat dock where you could rent canoes or kayaks, and several hiking trails through magnificent live oak forests. Tomoka contains the largest stand of old growth live oak in Eastern Florida. The Oak, covered with Spanish moss, fern, orchids and mixed with Sable Palm, create a beautiful forest adjacent to 12 miles of coastline.
The name Tomoka comes from the Timucua, a group of Native Americans who inhabited northeast Florida centuries ago. All that is left to remind us of these people are the 40 foot shell middens, mounds of oyster and snail shells, created from decades of habitation here. There is a statue at the picnic area, created by a local artist, Dana Marsh, that honors a native legend. Unfortunately, the museum was closed and no further information about the event depicted was available. 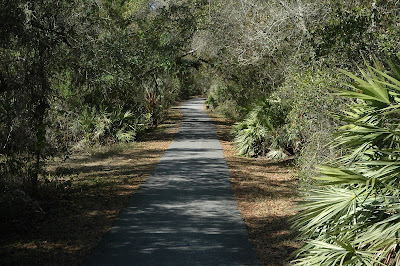 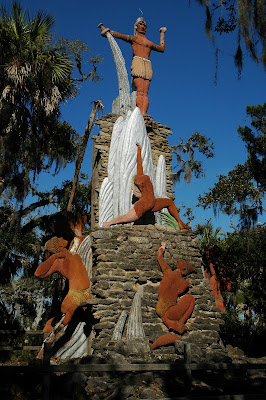 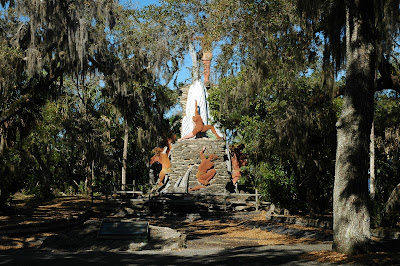 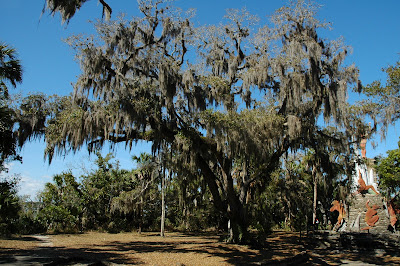 One of the Live Oakes at Tomoka
Several days we walked on Daytona Beach, which stretches for miles. Actually we went in at Ormond Beach and walked on the wide white sand all the way to Daytona. Ormond Beach hotels look a bit shabby, but as you move south they appear newer and progressively more expensive the further into Daytona you go.
While in this area we visited one of Marlin’s old bosses from Farm Family. Gerry and Audrey McGregor live in Palm Coast, which is about 30 miles north of Daytona. We spent an enjoyable afternoon with them catching up on the 16 years since Gerry has been retired, in addition to sharing a tasty lunch and a tour of their local attractions 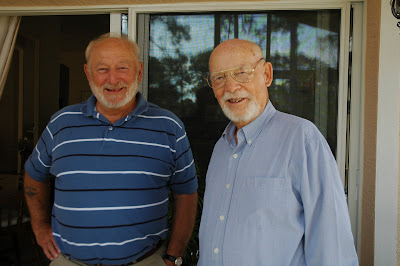 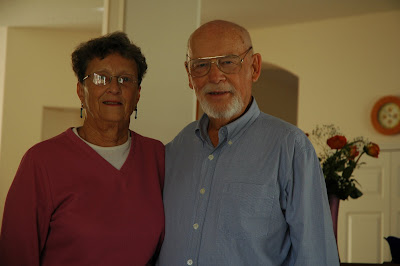 
The next day we toured St Augustine, which was about 50 miles north of the park. We got a late start, getting there about noon. After visiting the visitors center we realized there was more than one day’s worth of things to see here, so we had to narrow our choices. We headed for St George Street to visit the Colonial Spanish Quarter. This site is a living history museum which includes a small village with historical reinactors at a blacksmith shop, a carpenter, a leather tanner, a soldiers home, and a tavern, portraying life in the 1700s when Spain ruled this area.
We also toured the de Mesa-Sanchez house which began as a one-room Spanish dwelling and grew into a two story American Territorial period house. It has been restored to its 1830’sconfiguration, but the guided tour explains how and when additions were made, as well as the difference in Spanish and English architecture. Since it is restored as an 1830s dwelling, it contains English/American décor and furnishings.

Spain established St Augustine in 1565, making it the oldest continually occupied European settlement in North America. It was interesting to learn that in 1763, Florida was transferred to England after Spain’s defeat in the Seven Years war, but was returned again to Spain at the end of the American Revolution in 1783. This is known as the second Spanish period, ending in 1821 when the United States took possession from Spain.

The short remainder of the afternoon was spent window shopping along the rest of St George Street. We did not get to see the Fort, the Government House Museum, Flagler College or many other attractions here. We hope to return for a closer look before we leave Florida since we feel like we barely got an overview of this interesting and historic city 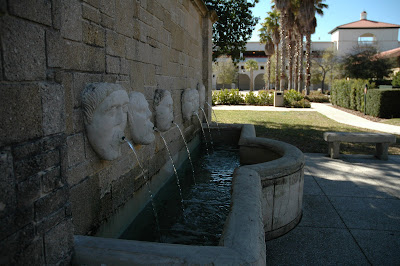 Fountain in St Augustine, a replica of the fountain in their sister city in Spain 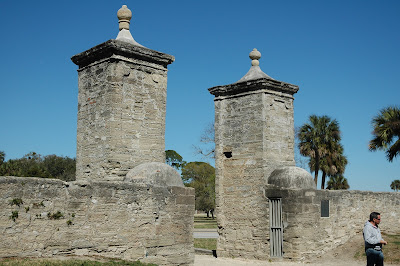 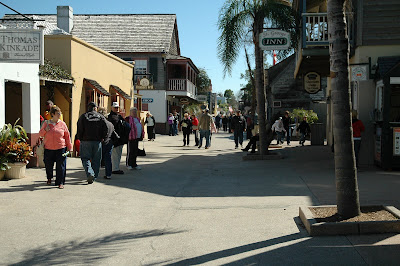 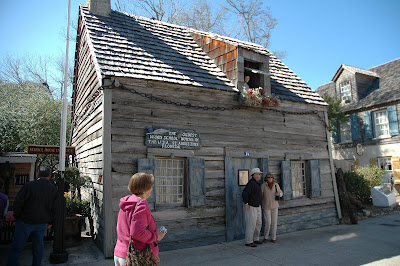 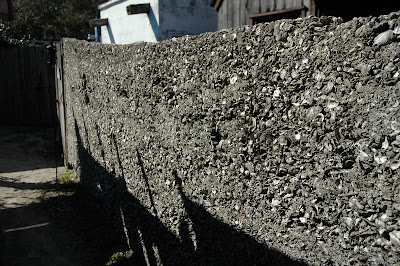 This wall is made of "Tabby" which is a shell rock like cement, mixed with water and poured into forms. These settlers used what ever they had on hand 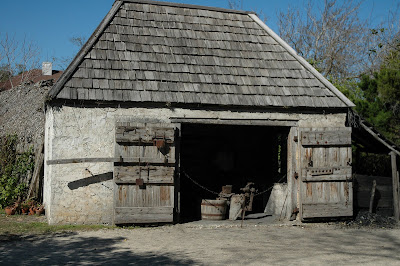 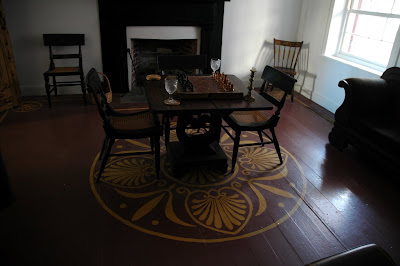 On our last day in this area, we decided we could not leave without going to the Daytona International Speedway. Here is another place we could have spent more time at. The tram ride takes you around the track, through pit row, and makes a stop at victory lane where you can have your photo taken, if you are so inclined. I could not believe how steep the grade was on the corners of the track. I believe they said it was a 30 degree angle. Why the cars don’t roll over or just fly off the top of the track is beyond me.
Back inside the main building there is a large museum containing memorabilia dating from the 1930s, when the racetrack was actually on the sand of Daytona Beach. Lots of interesting information and displays, including Matt Kenseth’s race car that won this years Daytona 500 race. There were old film clips of some of these beach races, including the motorcycle meets, and they looked exciting but also pretty dangerous. The space between the racers and the spectators had no barriers, not even a rope, no one wore helmets, and if a car crashed or rolled over it went flying where ever it was headed. It did look like most of the crowd was on the inside of the turns where it was less likely for a car part to come barreling toward you.
The current speedway built in 1956, took racing off the beach, and created a more organized sport as well as NASCAR, the organization that holds it all together. We watched a great IMAX film, “Ride of Their Lives”, which chronicled the sport with highlights from the past and its heroes. The film, narrated by Kevin Costner, is worth looking for, even if you are not a NASCAR fan. 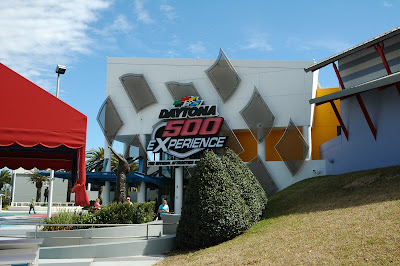 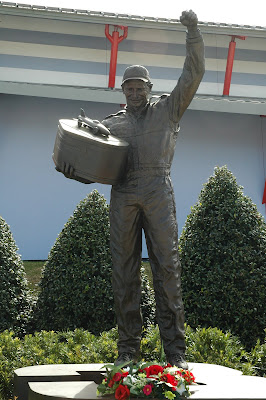 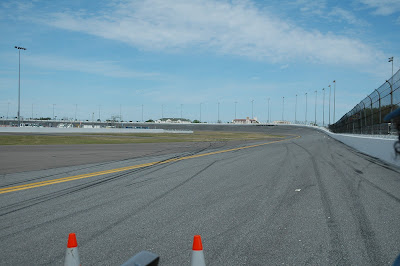 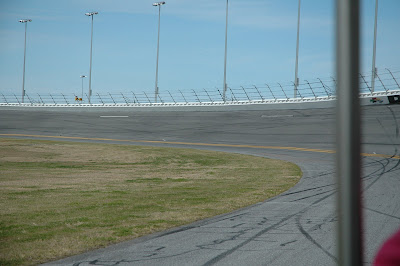 coming into the turn 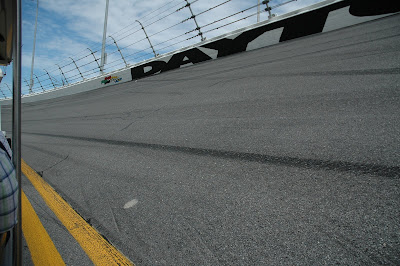 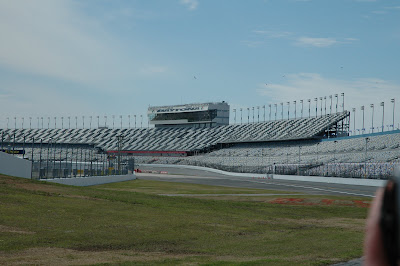 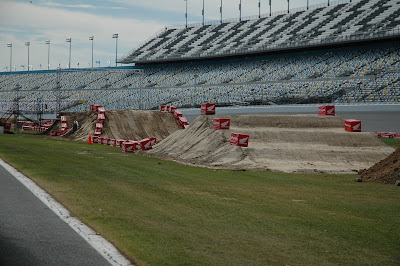 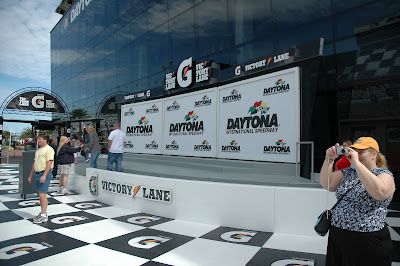 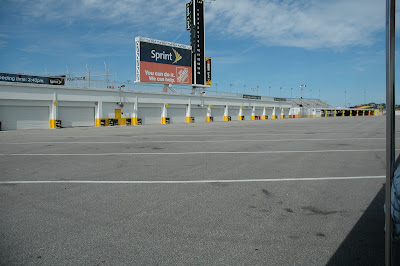 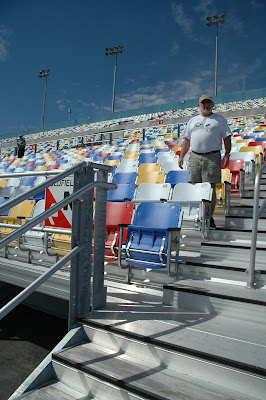 Marlin is picking out his seat for next year 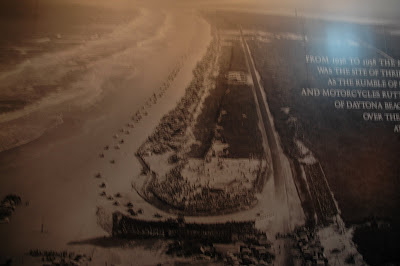 a picture of the race when it was on the beach

Stay tuned, our next stop is Blue Springs, where the manatees congregate in the winter because the water is 74 degrees