After leaving Blue Springs, we traveled about 50 miles west of Orlando to meet up with Chuck and Julie again at Winter Garden. This is a gem of an unspoiled, or I should say, tastefully revitalized town center. Most of the original buildings on Main Street remain, have been restored or well maintained, and are still in use today The local hotel, who’s lobby looks exactly as it did early in the last century, hosted a photo display of paired pictures, showing Winter Garden in the early 1900’s, matched with current shots of the same places.

At one time, the train ran down the middle of main street. The track has since been replaced with a paved bike path, a clock tower and a band stand, all of which is abutted with plantings of flowers, trees, and shrubs. The first night we were there ,we stayed in town for a Dixie Land Band that played in the square for two hours. A modest crowd, consisting of many young families with kids in strollers, as well as the older set, sat on the benches and swings surrounding the bandstand. 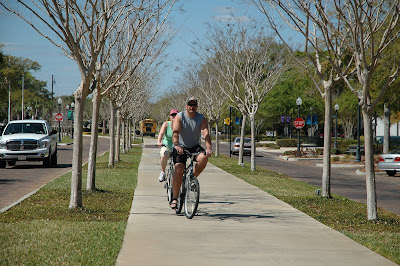 Bike Path. These folks were nice enough to pose for me.

The Heritage Society maintains the old train depot on Main Street, housing displays pertaining to the area’s people and history. At one time the county boasted extensive orange groves, however, after two successive winters, when deep freezes killed most of the orchards, the orange business moved further south. The museum housed a nice collection of pictures and artifacts from that era, profiles of prominent citizens, some sketches of Native American tribes who inhabited central Florida, as well as a collection of Senior class photos from back in the 50’s and 60‘s. While we were there several 6th graders, accompanied by their parents, came into the museum. This month is Florida State History month in the schools here. The classes were given a scavenger hunt and were told some of the answers were to be found in the town’s two museums. What a great idea to engage teens in local history.

The second museum in town is in the old Railroad freight building. This is decked out entirely with railroad memorabilia from across the country. The volunteer on duty the day we were there could not tell us enough about the efforts of the Railroad Historical Society volunteers to collect, preserve, and maintain this immense collection. In fact he talked so much we never got to see much of the collection. 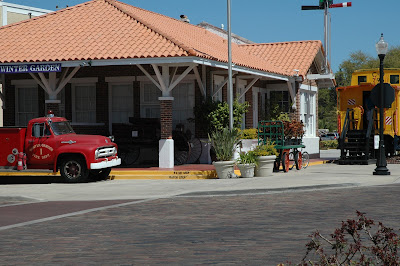 On Saturday morning there is a wonderful farmers market, where venders sell inexpensive produce, pecans, assortments of sauces, breads, and fruit. I went overboard and purchased way more than our tiny fridge and auxiliary cooler could handle. The very best establishment in town is a French bakery, complete with sidewalk tables, and, best of all, a 20 foot long pastry counter filled with scrumptious looking goodies. Boy was it hard to decide which one to try. They also offered sandwiches and dinner entrée’s but who could order real food with all those tempting deserts displayed at the front of the store. Of course we had to make several trips there during our stay in town. 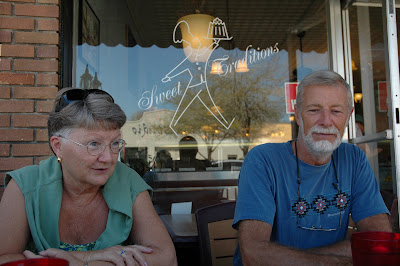 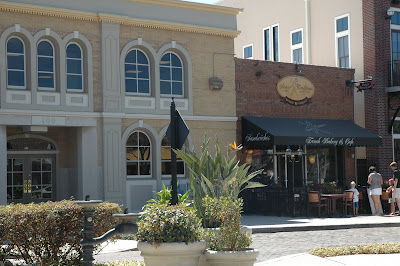 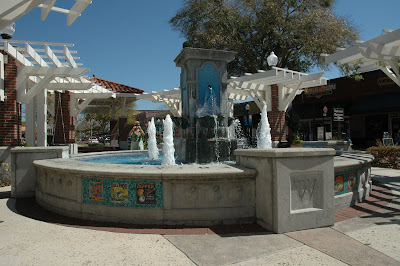 Fountain in the center of Main Street 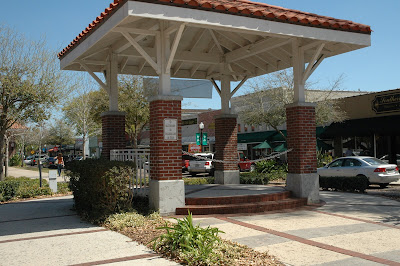 The Bandstand is next to the fountain 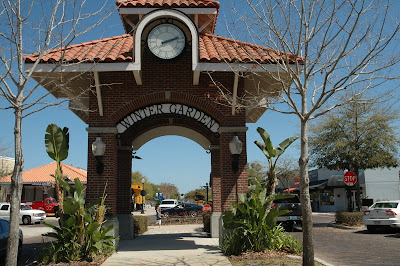 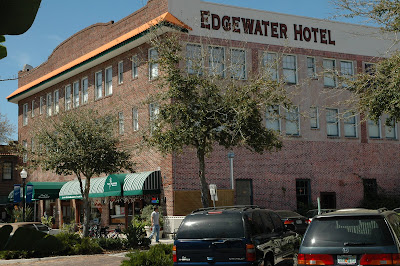 
The Monday we left Winter Garden we headed for a town called Webster where there is a giant flea market. Not usually my cup of tea, but we thought we’d check it out. It was huge, held in a fair grounds of some sort, it went on forever. Anything you could imagine was sold there from antiques, to books, tools, clothes, produce, etc, etc, etc. We only got through about half of it before running out of steam.
That night we camped at Silver Lake Recreation Area in the Withlacoochee State Forest. We had seen this forest area on the map and it looked interesting so we called to get directions. The campground is “first come, first serve”, so we were lucky to find a great site up on a small hill.
On our first trip to the rest room we met the campground host and learned about the “rails to trails” bike path that runs through the forest just outside the campground. The trail is about 47 miles of smooth, flat, pavement from start to finish. It has benches, tables, and rest rooms at intervals along the route, and intermittent parking lots at crossroads for access to the trail.
The next day, Judy and Dennis, the camp hosts, offered to lend us their extra bikes. They spend the winter here in their camper, biking to do all their errands at towns along the bike trail. In addition to their street bikes, they bring mountain bikes for the off road trails that are also here in the forest. We took them up on their offer and headed for the closest town of Trilby. It turned out to be 9 miles there and 9 miles back. Quite a work out for our tender bottoms with no padded shorts. Many of the campers around us have been in this park since January and have formed a friendly close knit group. We were invited to join a pot luck supper the second night there and spent the week visiting and getting to know many different folks who are traveling away from the cold northern states.
The campsites are also on the Florida Trail, which is a hiking trail that winds through rural sections throughout Florida. We hiked several portions of this trail along the Withlacoochee River. The trail here has primitive camps on the bank for people canoeing the river. It is also marked for high and low water. We took the low water trail and were amazed to see just how high the high water level was on the bridge supports. The brown discoloration, marking the most extreme depth was at 17 feet. We were standing on dry ground at the base of the support. The trail also travels through a dry cypress swamp. It gave us a good view of how those knobby little “cypress knees” spread out from the base of all the trees.
On Saturday, many of the campers bike to the town of Nobleton where the local church puts on a lunch with 6 different kinds of soup and several choices for sandwiches. We did not bike there, but joined the crew from the campground. The hall was full, so I gather this is a good money maker for the church. We went on to the Floral City Strawberry festival, which we thought was going to be a small town affair. It turned out to be bigger than the Common Ground Fair, minus the educational demonstrations and exhibits. Mostly home made crafts, but lots of strawberries being sold in flats and mountains of shortcake being consumed.
We received word that the shuttle launch is set (maybe for sure) for Wednesday the 11th , at 9:30 pm. On Monday, we will head back to the east coast, and then meet Linda & John on Wednesday afternoon for the big event. Our next adventure should be exciting. Stay tuned. 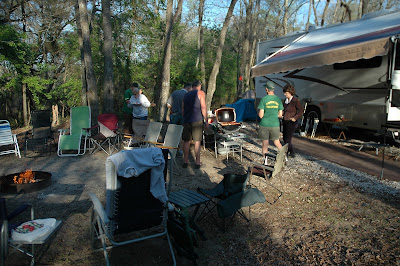 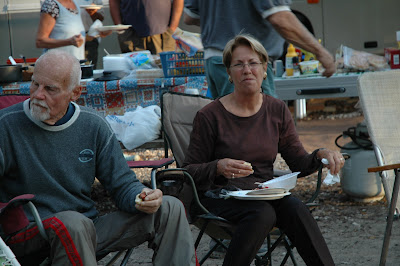 Our hosts for the evening, Cheryl and Bob Baxter 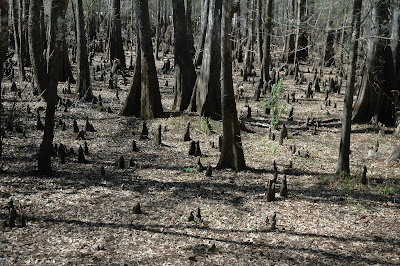 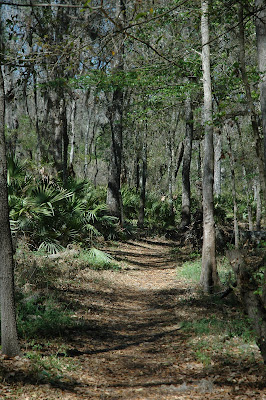 A path on the Florida Trail. Wouldn't these sandy, rock free, flat trails be wonderful in Baxter Park? 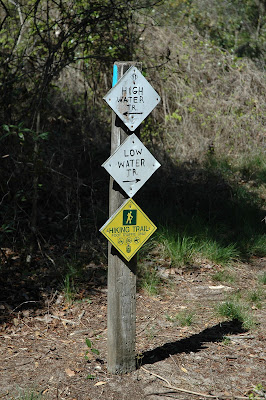 We took the low water trail, as you can tell from the dry cypress swamp pictures 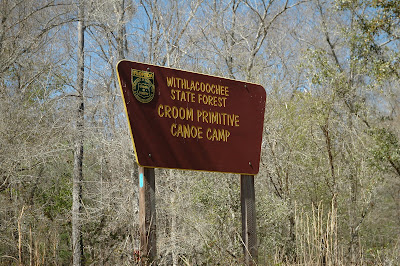 I needed this sign to get the spelling right 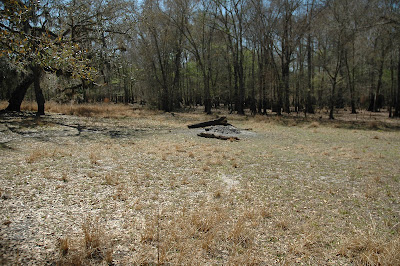 The "primitive" camp on the river bank 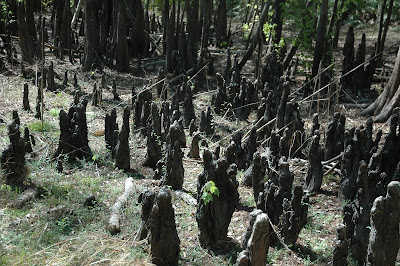 More cypress knees. Usually most of these knees are underwater 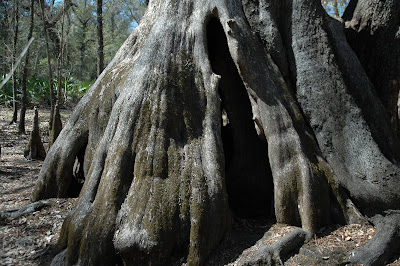 We should have had one of us in this photo for a size comparison. It was huge, but you could see right through to the other side 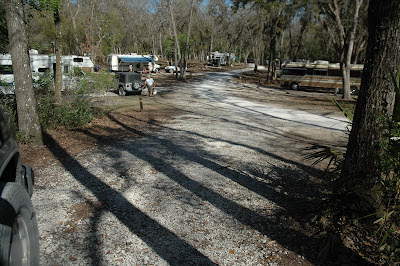 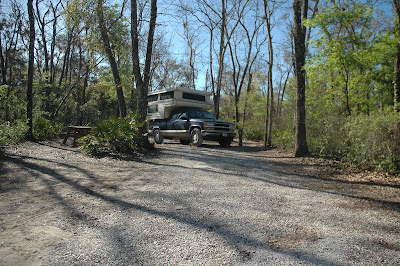 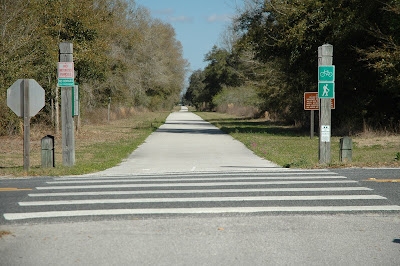 The bike path at one of the side road crossings.