I have definitely been neglecting this blog over the past three weeks. I must admit we have been experiencing way too much leisure time and very little touring since arriving in San Luis Obispo. In addition to which, when I did have access to the Internet, blogspot was not cooperating and would not upload my pictures. Excuses, excuses.

After another two attempts to get this finished, I am publishing an unfinished version. It ain't pretty, but lots of folks have been asking what's up. I will try to edit later. Thanks for your patients. (Edited on Friday, 3/14- Still some spacing glitches that won't correct, guess it will have to do.)

This leg of our journey includes visiting many old friends from our California days. San Luis Obispo, SLO, as it is called locally, is a beach town north of Santa Barbara and south of Morro Bay. We are actually staying in Oceano and Arroyo Grande, 10 or so miles from SLO. These towns are also on the beach, but much less populated, even in summer, than SLO. Steve & Beth Fleming live in Arroyo Grande and Russell Moran lives in Oceano, just a couple of miles away. Both are only a short hop to the beach. 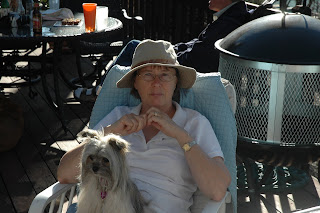 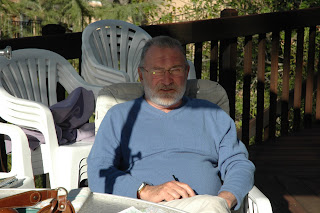 The original plan was to camp in the State Campground that abuts Pismo Beach. The camping sites come complete with a path over the sand dunes onto the beach. We picked out the most appealing sites but by the time we figured out the registration procedure, someone else had occupied the best locations.

That turned out not to be a problem because at dinner that evening our friend Russell Moran made us an offer we couldn't’t refuse. One of his rental houses was empty for the next two weeks, so we moved in. Of course there was no furniture in this two bedroom house, so we borrowed a blow-up bed, some folding chairs, purchased a $12 lamp, a beat up chair from a thrift store, and brought in all our cooking equipment from the camper. Just like camping only in larger quarters. Our favorite activity while here was a morning walk on the wide white sand beach that stretches all the way from Pismo to San Luis Obispo. (oops, another mis-speak. That should be "all the way from Oceano Dunes to Pismo Beach". San Luis is the larger city 12 miles inland. 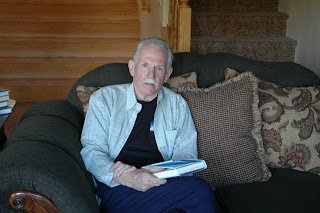 
We attempted to visit San Simeon, (Hearst’s Castle), however, on that particular day, highway 101 was closed just south of the castle for one leg of the 5 day professional bicycle race that is run along the California coast. We poked around at a small village called Cambria then we decided to stop back in San Luis Obispo to watch the finish of the race.

It was a rainy windy day so the half hour we expected to wait, turned into 2 hours of standing in the rain to see 20 seconds of bicycle racers flying past . The riders had experienced, not only constant rain but had to peddle all day into 30 mile per hour head winds. Needless to say their times were a bit off. There was the excitement of the crowds, and the hype that was being broadcast on the giant TV screens at each corner, that made it kind of fun 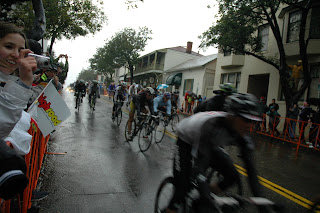 On Friday, February 22, we met up with Chuck & Julie again where they were camped just north of Santa Barbara, It was a beautiful site reached via mountain roads that passed a reservoir and wound through a State Forest, onto a narrow road with hair pin turns twisting down into a beautiful valley with a ranch/campground at the end. It was truly a ranch/campground. There were at least 80 to 100 horses in various corals and you could book a trail ride if you so desired. They probably would let you do a little shoveling if you really wanted to.


The next day we attended a baby shower for Nora Perez, who is the daughter of Dixmont neighbors Dick and Joan Andren. Nora and husband Rico live in Ventura and are the new parents of a 4 pound premature daughter. Her Birthday was supposed to be March 25, but she couldn't wait that long. Nora was able to make the shower, but baby Karina will have to stay in the hospital till she is 5 pounds. We got to see a video of her that Joan had made at the hospital the day before. She is doing well and should come home soon.

Sunday we toured a little Danish village called Solvang, the home of the little known (at least on the East Coast) Aebelskivers. These ball shaped pancakes were a favorite at my mother’s house after she first visited here in 1964. Louise, of course, bought the pan, recipe, and ingredients, and began treating guests to this unusual treat that is served rolled in powdered sugar and covered with raspberry jam. I’ve been known to surprise friends with these treats also. We all had a plate full with our lunch and reminisced about Louise’s enthusiasm for new and unique experiences. 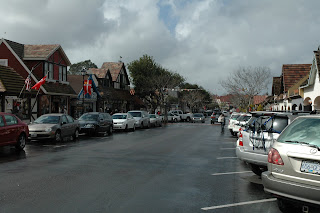 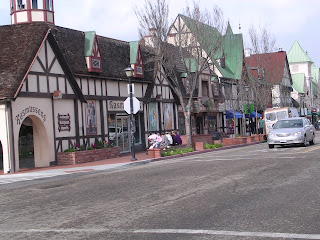 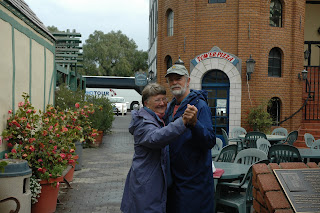 Dancing to outside (and inside) music 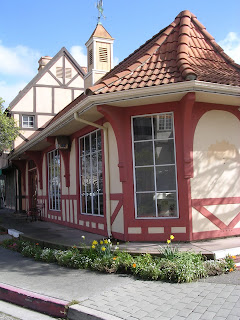 Julie & I decided we would open this this "For Rent" shop with all kinds of things you don't need but would love to have. It was approved by Chuck and Marlin because it was next to a bakery.


The next week Chuck and Julie came up to Oceano for a couple of days to enjoy the beach with us. In addition to walking the beach with them, we visited a grove of eucalyptus trees where approximately 17,000 Monarch butterflies spend the winter. The insects like a cool moist climate, so there are several spots in this area where they rest up for the mating season and their spring time trek north.

We were there to witness some of the mating activity, which occurs just before they take off for the summer season. The female lands on the ground, the male finds her, grasps her in pincers designed for this purpose, then flies up into the trees to mate. Very romantic, don't you think? Five generations will have passed before the Monarch’s return to the coast next winter.

It was also interesting to learn that the Monarch’s west of the Rocky Mountains winter along the California coast, while the Monarch’s east of the Rockies winter in Mexico. Our docent visited the Mexico groves one year and said they often have as many as 17 million butterflies in one grove. Obviously, in the butterfly world, Easterners out number Westerners. 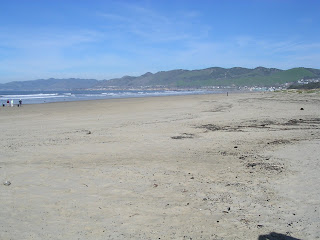 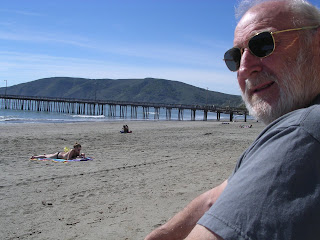 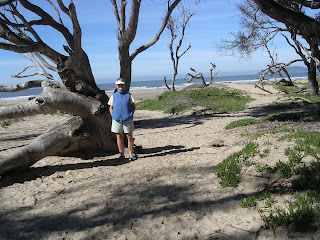 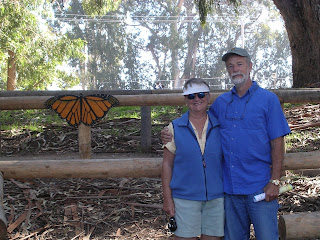 Chuck & Julie at the butterfly site. This grove is just off the boardwalk that runs parallel to the beach


Well, all good things must end and Russell’s tenants were moving in on March 1, so we headed north to impose on other friends in Sonora. Sonora is located east of Stockton, in the foothills on the approach road to Yosemite National Park. This is the first time we have been here. Ed and Redwing (Sherylyn) usually travel south to San Luis Obispo when we are in town.

The Sonora area is part of the famous gold rush territory that includes Angels Camp, Chinese Camp, and Calavaras County where Mark Twain wrote his famous jumping frog story. Lots of history and many restored villages to poke around in. Today there are several well known wineries located here, so we visited one called Ironstone that was having a Daffodil festival. Yes Mainers, Daffodils are in bloom here, as well as fruit trees and forsythia bushes. Got some new ideas for my container gardens next summer. 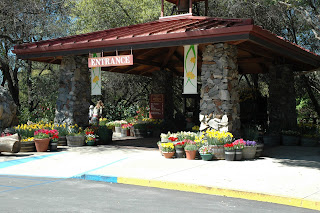 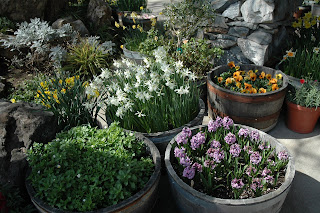 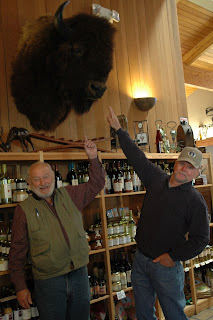 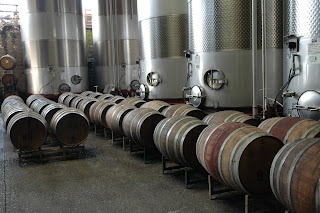 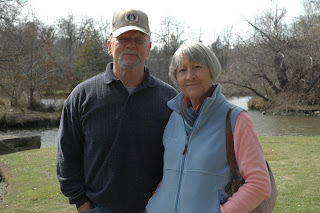 
We spent three days visiting with the Klawns and trying to beat Ed at the game of Rummikub before investigating Yosemite Park. Ed shared some amazing stories about his father's disappearance and childhood escape from Kiev, Ukraine in a train load of hay. His family’s experiences would make a riveting script for a John LeCarre novel.


This is the time of year to visit Yosemite. Very few cars or people. Some roads and trails are closed, but the valley is open and the 620 foot high Bridalveil as well as the 2,425 foot high Yosemite falls are in full flow

Yosemite falls is the tallest waterfall in North America. Good views are possible from below, however unless you hike to the middle or top, the falls appear as separate pieces. 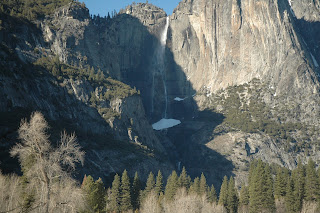 Our first view of Yosemite Falls. The pile of ice at the bottom builds all winter to a height of 300 plus feet, then as the temperature rises and ice melts, the upper falls create a crater in the middle of the pile and it slowly becomes part of the lower falls again 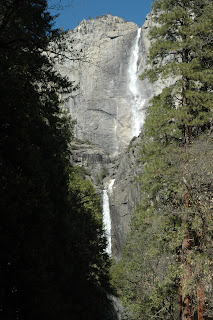 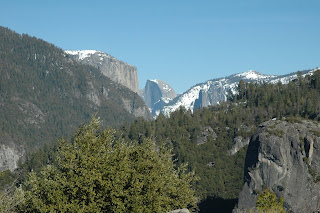 Half Dome from afar 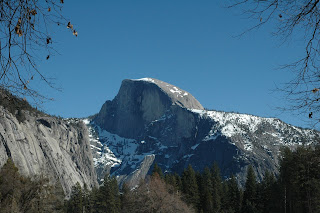 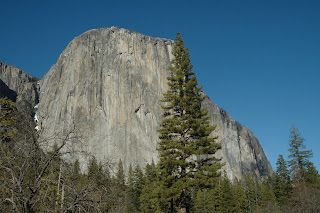 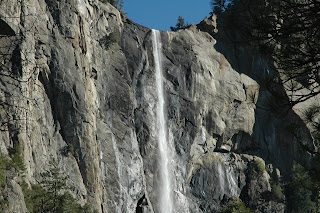 Bridalveil Falls. Often, no water reaches the bottom of this falls because of wind blowing the water into a mist.

We took lots of pictures but only a few short hikes. In hindsight I wish we had taken one of the ranger led snowshoe treks that were offered. I read about them in the newsletter after we left!


One of the places I wanted to revisit was Camp Curry. At age 20, Ruth (Stephens) Bringardner and I bought a car and took the classic road trip from the East Coast to California. One leg of that journey ventured over Tioga pass, the mountain road leading from the east into Yosemite valley.

We stayed the night at Camp Curry, in what we thought was a regular motel. It turned out to be a somewhat primitive, rustic, and rickety duplex cabin where the wall between occupants was not much more than paper thin. The two of us christened the lodging "Camp Curry-Concentration Camp of the West". When Ruth and I got into a giggling fit, which we could not stop, our neighbors began banging on the wall and yelling for us to be quiet! You can only imagine that that made us laugh all the harder. 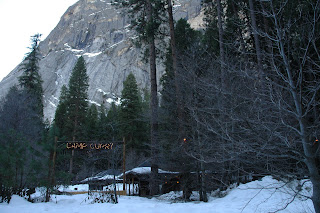 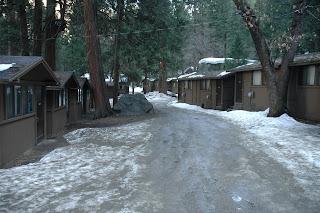 We also drove to an adjacent valley called Hetch Hetchy, who’s Native American name “hatchhatchie” means edible grasses. According to John Muir, the beauty of this area rivaled Yosemite valley. However, he lost his battle to preserve it, when in 1913 congress approved the construction of a dam on the Tuolumne River, creating a reservoir of water for the San Francisco area and submerging much of the grandeur beneath 300 feet of water. A trail leads around the lake past the six waterfalls we counted that were cascading over the cliffs. 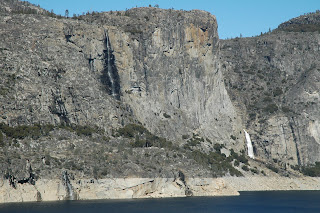 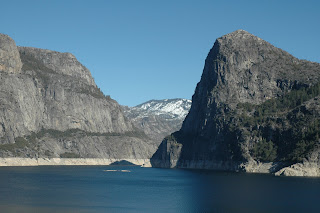 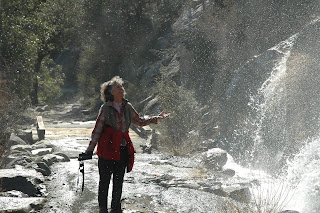 This waterfall on a trail around Hetch Hetchie, was diverted to flow under the trail. It gave us a refreshing shower, and continue on its merry way down the other side of the path 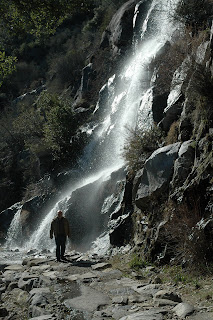 Marlin needed his raincoat hood up to get a drink

After three days in Yosemite valley, we returned to Sonora, then on to Auburn (near Sacramento) for another reunion with friends Marlin was in the Air Force with and who all went to San Francisco State at the same time.