The next stop on our travels was a reunion of the Air Force 831st Tactical Hospital unit. Most of our California connection stems from five guys who served together as medics in the late 50s and early 60s. The friendship they established, which now includes spouses, has lasted almost 50 years.

We met at Jack Emmitts’ home, an elegant house, located on a small lake in Auburn, California. This Auburn is East of Sacramento, California toward lake Tahoe, not just south of Augusta, Maine. It was fun to call James and joke that we were both in Auburn. However, my Auburn had trees and flowers blooming, James’ Auburn was having icy cold rain.

Lots of good food, rehashing of old Air Force stories, and catching up on each others lives and adventures. 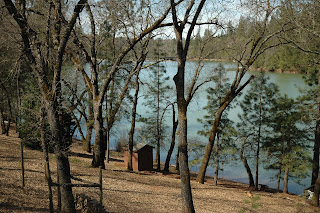 The view from Jack's deck 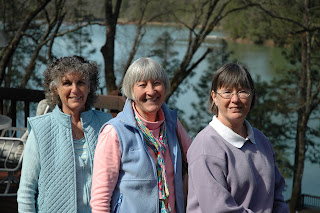 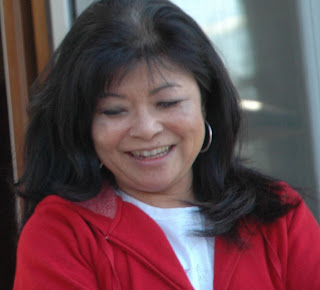 Chris Emmitts. She was always so busy doing something to make everyone comfortable she missed all the picture taking. Perhaps she planned it that way. 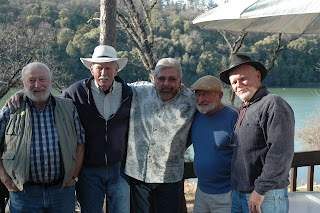 
After the weekend, Marlin and I moved on to Lassen National Park, which lies at the southern end of the Cascade Mountain range. Naturally, being high in elevation, the park was still covered in snow and all the interior roads closed.


Reading the park brochure I was amazed that this mountain erupted multiple times as recently as 1914 and 1916. It is still considered an active volcano. Today, less than 100 years since the top blew off and covered the area deep in ash, now forests tower over most of the devastation. There are still piles of lava rocks poking out in unusual places, but mother nature has done a good job of covering up all the volcanic scars. Park information compares this regeneration to Mount St Helen, and what it will look like in another 50 years.


Some spots we stopped at reminded me of the lava fields in Hawaii. In parts of this park there are still boiling hot springs and geysers, letting you know what lies just under the surface.
Lassen peak, the 10,457 foot high mountain, is actually only a small piece of an ancient 8 mile wide composite volcano, which has been broken down by weathering and hydrothermal activity into a circle of four separate peaks. Of course, that was 400 to 600 thousand years ago. We took a short trail that allowed good views of these peaks. 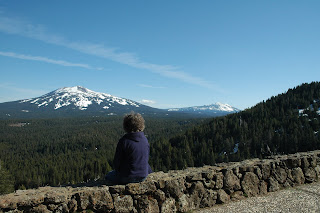 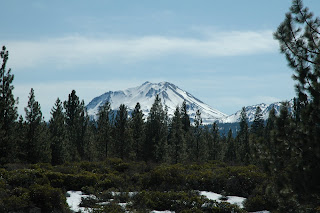 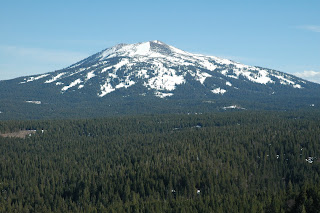 From Lassen Park you can see another of the Pacific Ring of Fire volcanoes, Shasta Peak. We drove a short distance north west and into the town of Mount Shasta City. This small ski town, which sits on the lower flanks of the14,275 foot mountain, reminded me of Kingfield triple in size.


The snow covered mountain rises straight up behind the main street. From this vantage point it appeared to have less snow than we had seen from the distance. A shop keeper explained that we were on the western side of Shasta and the view from Lassen looks at the Eastern slope, which has deeper snow. That is also where the ski resort is located. 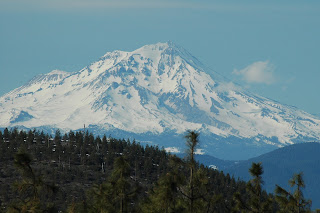 Mt Shasta
Posted by cooktravelogue2007-8.blogspot.com at 1:20 AM