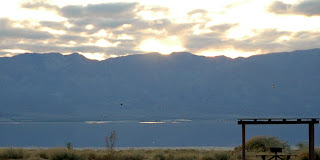 South of Joshua Tree is a place with a truly unusual derivation called Salton Sea. We arrived here around five o’clock and were treated to a vibrant sunset reflected in a lake that was much bigger than I anticipated. Flocks of white pelicans and egrets swam near the shore, with other water fowl off in the distance.
At the visitors center the next day we learned that over 400 species of birds use this area either as a winter home or stop over on the Pacific Flyway. We saw large flocks of birds everywhere we went that day.
The most entertaining were the thousands of Ross geese hanging out in the fields of rye, planted by the National Wildlife Refuge, for their pleasure. Signs said it also helps to keep the birds out of local farmers crops. 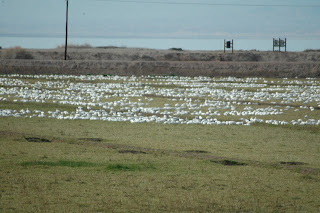 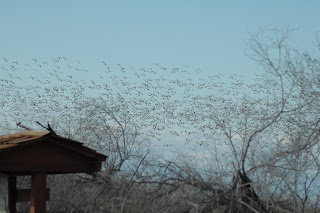 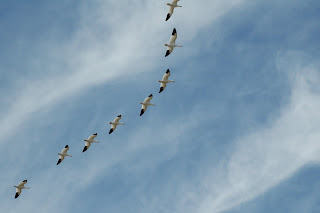 The least change in the environment sets them off to flying in packs. Some of them would be just taking off while the first batch had already circled back. It is hard to believe they don’t crash into each other. 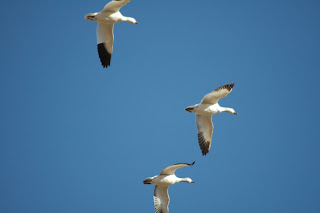 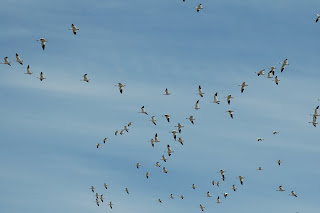 We watched for wood storks, which are listed as a wintering species, but saw none. My favorite new sighting was the black neck stilt. This long legged wader has a skinny black and white neck. It is comical to watch him fly with his chin pointing forward and those stick like legs stretched back.

Originally this “sea“ area formed millions of years ago when the land lying between two major faults dropped more than 200 feet in elevation, allowing the ocean to fill the space as far north as the present day Imperial Valley. The geologic record indicates that this became dry and wet through several cycles, the last opening to the Pacific having been closed off by silt from the Colorado River, leaving a dry alkaline basin as late as 1900.
In 1901 canals were dug from the Colorado River for agricultural development. When these ditches began to silt in, a larger diversion ditch was constructed to bring water direct from the river. Severe storms in 1905 brought high water and extra run off into the man made ditch causing the embankments to be washed away and allowing 90% of the river’s water to flow unchecked into the low basin area. This continued for a year and a half before the breach could be closed and the Colorado’s flow returned to the Pacific.
Before the river was put back on course, it had created the 35 mile long Salton Sea, which has no outlet. Water only enters through agricultural drainage and runoff from the mountains and can only leave through evaporation. The water level stays in balance, with about six feet of water coming in and six feet being evaporated. The problem is, when the water evaporates, the salt suspended in the run off water is left behind, increasing the salinity of this “fresh water” lake by 4 million tons per year. 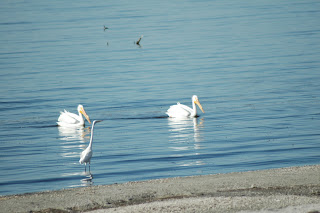 During the 50’s and 60’s this was a recreational paradise, with fishing and boating as the highlights. Today, only one type of fish remain and no one wants to put an expensive boat into water that has a salinity much greater than the Pacific Ocean.
The lake is also nutrient rich, due to the fertilizers in the run off, so algae bloom frequently occurs. When the algae die off, oxygen in the water is depleted and fish die by the thousands. Not a pretty sight or smell. These two situations, salt and excess nutrients, are killing this body of water.
Although their have been endless studies about how to solve these problems, to date not much has been done and the Sea continues to become more salty and more nutrient rich, killing fish and discouraging recreation. The main question is what will happen to all the bird life when the sea dies? It may be past fixing already. Where once 5 or more types of sport fish abounded, now only Tilapia survive. Tilapia are prolific breeders and their over population adds to the Sea’s problems.