Braving the California freeway traffic, we found the centrally located campground/ RV Park
that we had scoped out in our Passport American book. It wasn’t our favorite type of lodging, since it was located just off the freeway with an active train track directly behind the park, but it was close to some sights we had on our list to see.


After registering and finding our spot we headed for Old Town San Diego State Historical Park. This park recreates the village of San Diego between 1821 and 1872. There are actually four original buildings among the other historically accurate reconstructions. In 1968 work began to restore the original adobes that remained on the site. Further work reconstructed five other buildings where they had stood before fire or decay eliminated them from the village landscape. 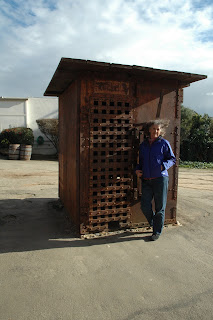 The first jail in san Diego. Imagine being put in this metal monster during the summer? 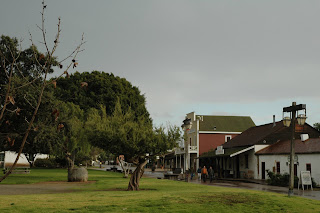 The present appearance resembles a park like rectangle, fronted on four sides by homes and buildings. We purchased a walking tour booklet that described each building and spent the afternoon following the map. 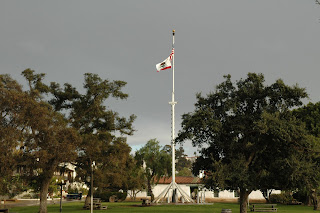 The reconstructed Colorado Hotel, is currently set up as a Wells Fargo History Museum. The original building, built in 1850, burned in an 1872 fire. The museum’s film recaptures the part that Wells Fargo played in the Pony Express and Stage Coach eras of transportation. 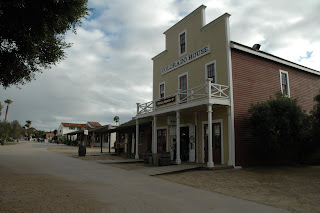 The main building houses a restored stage coach and artifacts from the gold rush days, when Wells Fargo got into the money business.


You had to be one tough customer to ride that stage to California. It took 47 days, full speed ahead over narrow, steep, dusty, unimproved trails, stopping only for three daily meals, carrying up to 18 passengers, half of them astride the top of the wagon. Those folks really wanted to get their chance at that gold. 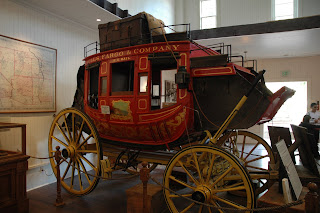 Most of the adobe’s within the square are small and modest affairs. However, the large sprawling La Casa de Estudillo is an exception. 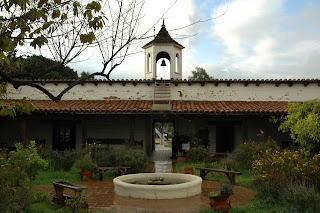 This was home to one of the most distinguished families in Old Town San Diego’s Mexican and early American eras.

The whitewashed adobe-block townhouse was build in 1827 around an enclosed courtyard that contains a central fountain and flowering gardens.
In its day, it was the social and religious center for the town. In the building’s 12 rooms were included servants’ quarters, storage rooms and a Catholic chapel. This casa was restored in 1906 by John D Spreckles and is on the National Register of Historic Places. 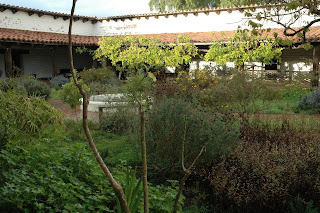 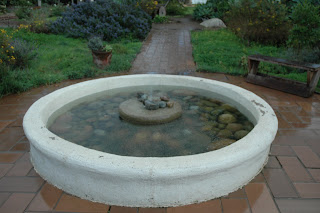 After touring all the buildings around the square we looked for restaurant and settled on La Piñata, billed as the oldest restaurant in Old Town. The food was excellent. I even tried a tamale and liked it. My chorizo burrito was smothered with guacamole and the rice had nice chunks of onion and pepper throughout. A nice recreation of one of our first dates back in 1965 right here in Old Town when I had no idea what Mexican food was all about.


The next day we went to Balboa Park, which was the site of the 1915 Panama-California Exposition and the 1935 California Pacific International Exposition. Magnificent gardens and buildings make up this huge 1200 acre complex of museums performing arts venues and zoos.


We spent the day walking in many of the formal and informal gardens and going to the Museum of Man which is one of the 15 museums on the grounds. In addition to some permanent exhibits on Mayan culture, Egyptian artifacts, and local native history, the ground floor currently has a showing of African sculpture. Each piece is paired with comments and a short biography from the artist. Closing time, unfortunately was 4:30 and arrived long before we had even scratched the surface of this park. We planned to return several more times while in the area.

On Saturday we woke up 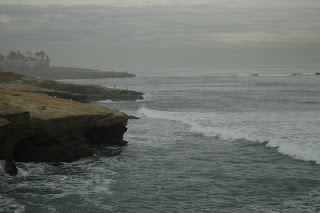 with the start of a cold and were feeling a bid loggie, so we took the day to drive through Silver Strand State Beach, which is on the outer banks of San Diego Harbor.

After spending some time at the beach, we drove north through the town of Coronado and out to Cabrillo National Monument at Point Loma.

The first lighthouse here was built on the highest land at the point, but that proved to be fogged in most of the time. A second light was built down at sea level wh 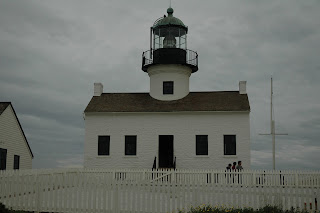 ere less fog made the light more useful. It was a pleasant day and we enjoyed the beach and the light house at Point Loma. 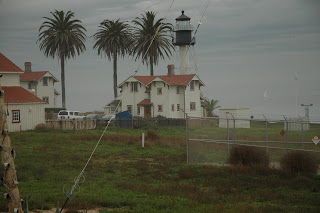 Sunday, after an all night rain and wind storm, we were really into this cold big time. Although we wanted to return to Balboa Park for the Sunday afternoon organ concert at the Spreckles Organ Pavilion, all we had the energy for was sleep and we wanted somewhere quiet and a bit more private that the RV park we were in.


We decided to drive North out of the city. We ended up in San Mateo State Park in San Clemente where it was blissfully quiet and slept for two days. Our cold held on for the next five days so we stayed put in San Clemente, taking an occasional short trip downtown for supplies and other errands. Spent one day at the San clemente pier admiring the January flowers and the clever pigdeons. 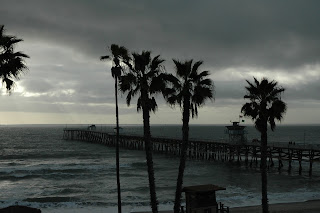 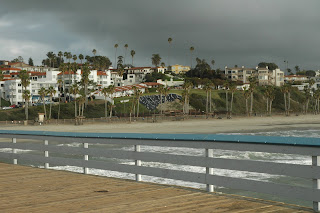 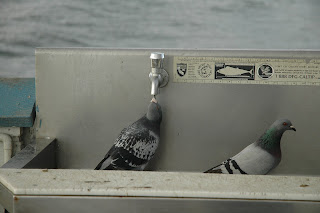 Feeling at least 80% after a whole week of down time, we are now looking for a spot to watch the Super Bowl on Sunday.