Our last day in Joshua Tree National Park we drove south to an attraction called Cholla Cactus Garden, which is located half way between the higher Mojave Desert and the lower elevation Colorado Desert. This Cholla cactus grows in abundance at a south slopping site where silt from the weathering rocks has spread into what is called an alluvial fan. In our desert travels we have seen many cholla cactus but none that have grown this large or as densely populated as they are in this spot. 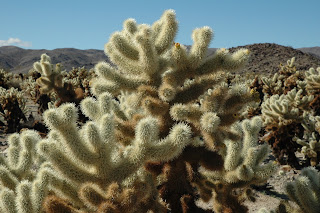 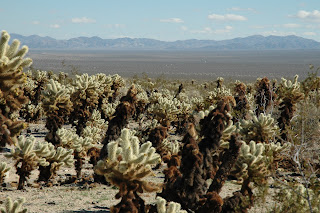 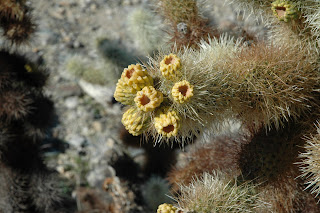 One of the reasons we wanted to come to Joshua Tree was to visit the nostalgic site where we experienced a now hilarious cactus attack. Back in the 60's when we lived in California, we made a weekend trip down here and walked through this same cactus garden.


At some point, I saw a small dead (or what I thought was dead) spiny ball on the path, so I reached down and picked it up. These days there is a sign that tells visitors that even if they look dead, they can get you. Immediately my thumb

and for finger were stuck to this tiny ball so I naturally used my other hand to pull it free. No such luck, now both hands were stuck. 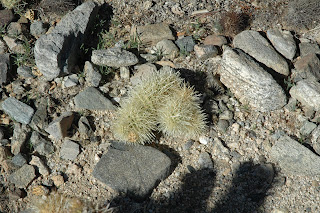 Marlin came to help, and you guessed it, he got both his hands stuck as well. Here we were, feeling really stupid and unable to get away from this prickly attacker. Finally, Marlin somehow got his shirt around one side of it and was able to release his hands, then mine. To this day I swear that cactus jumped into my hand before I even touched it.


We had fun reliving this episode and walking the short numbered trail that pointed out interesting sites. Pack rats make nests out of the fallen cholla balls, and even line the path into their homes with the spiny pieces to keep out predators. The only hunter that is not deterred by this tactic is the rattlesnake who slithers right down that nicely outlined path into Mr. Rat's den.


Further into the Colorado Desert we began seeing scattered flowers, which became more abundant as our elevation lessened. It was amazing to see bright yellow, white, purple and red blooms in what look 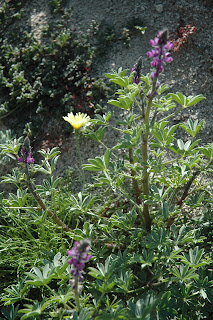 ed like dried barren soil. When we stopped the truck and took a closer look we realized that the tiny purple flowers were a small version of our lupins, simply called Desert Lupin. The leaves and flowers are just miniatures of the blooms we see in Maine. 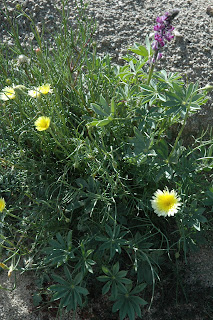 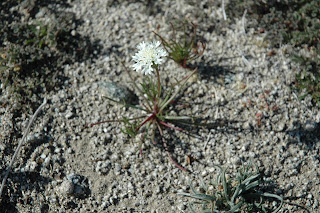 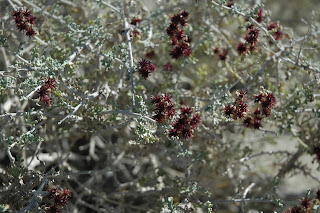