The city of Roma is about an hour west of Bentsen so we set out early, with a breakfast stop at Margarita's to sample Texas' version of Huevos Rancheros.  We love the food here, but today our vote was for James, who makes this Mexican egg concoction  for us at home.  The waiter was not busy so we chatted quite a bit with him and he offered to take our picture. 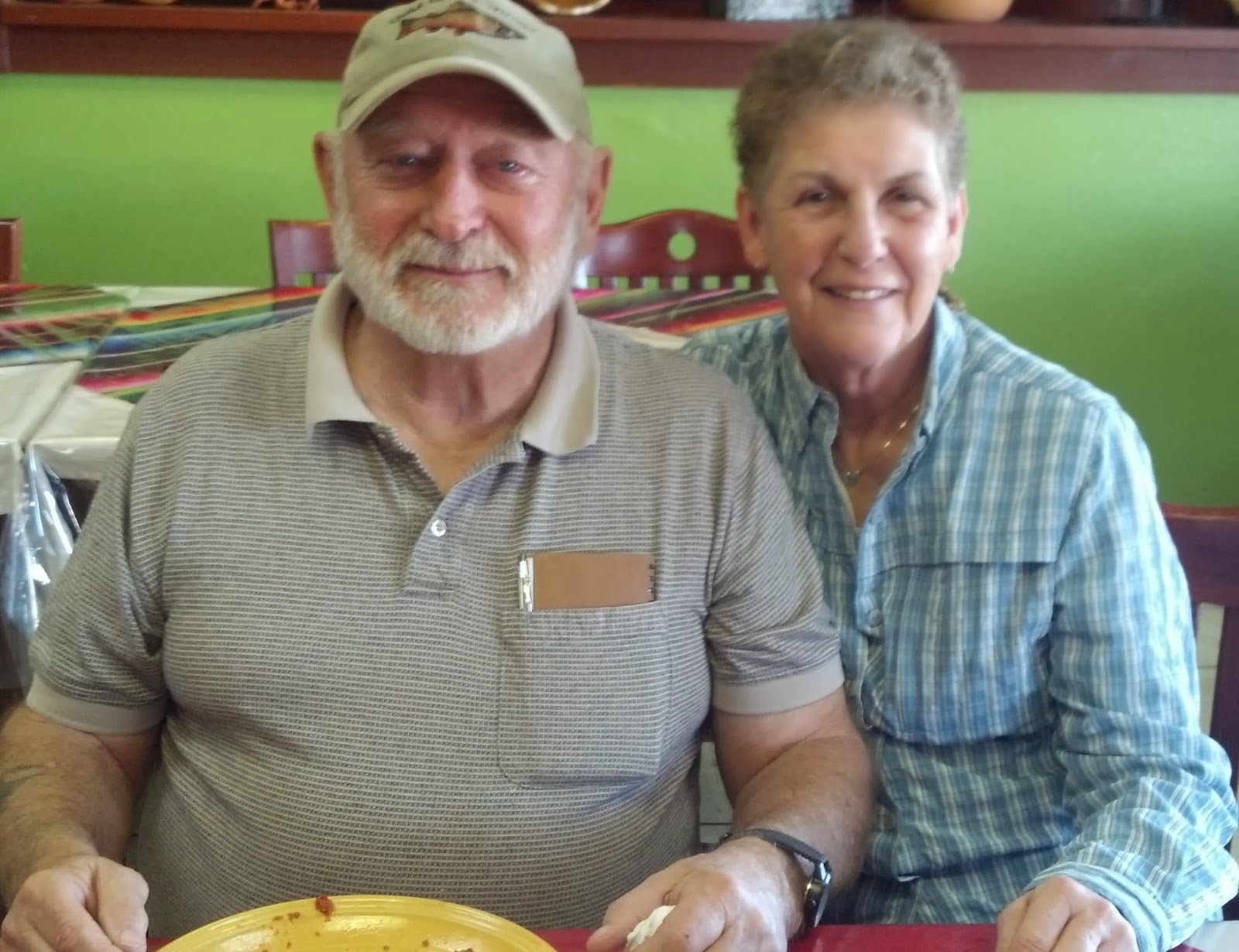 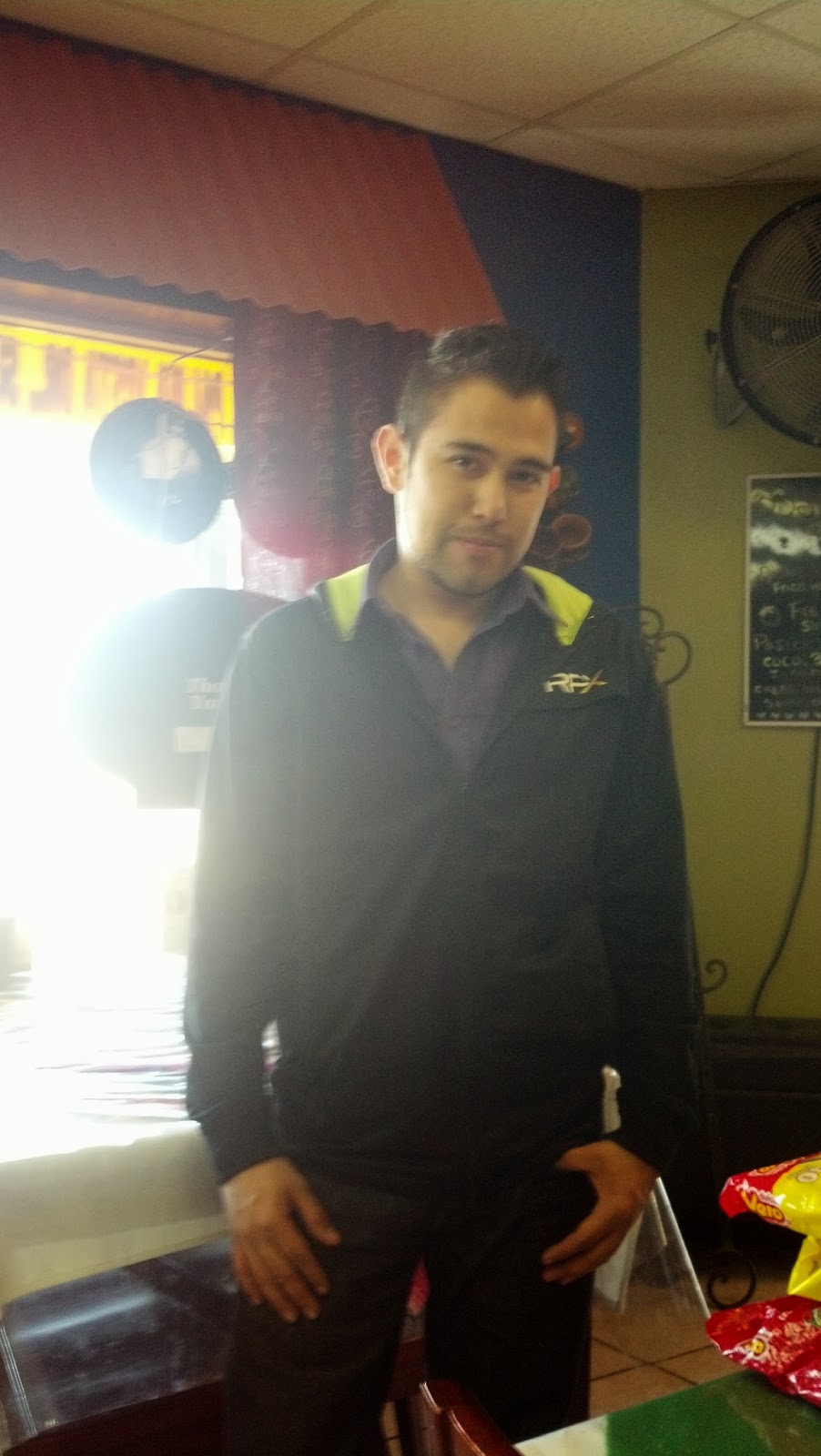 Then we took his picture!  The restaurant is run by a family.  Mom cooks, the three kids we have met wait tables, and all are super friendly.  They will fix your food any way you want to order it.  Sometimes the translation is not perfect.


Roma sits high above the Rio Grande River on the US side and the World Birding Center maintains an open deck that provides great views East, West, and South across to Mexico. 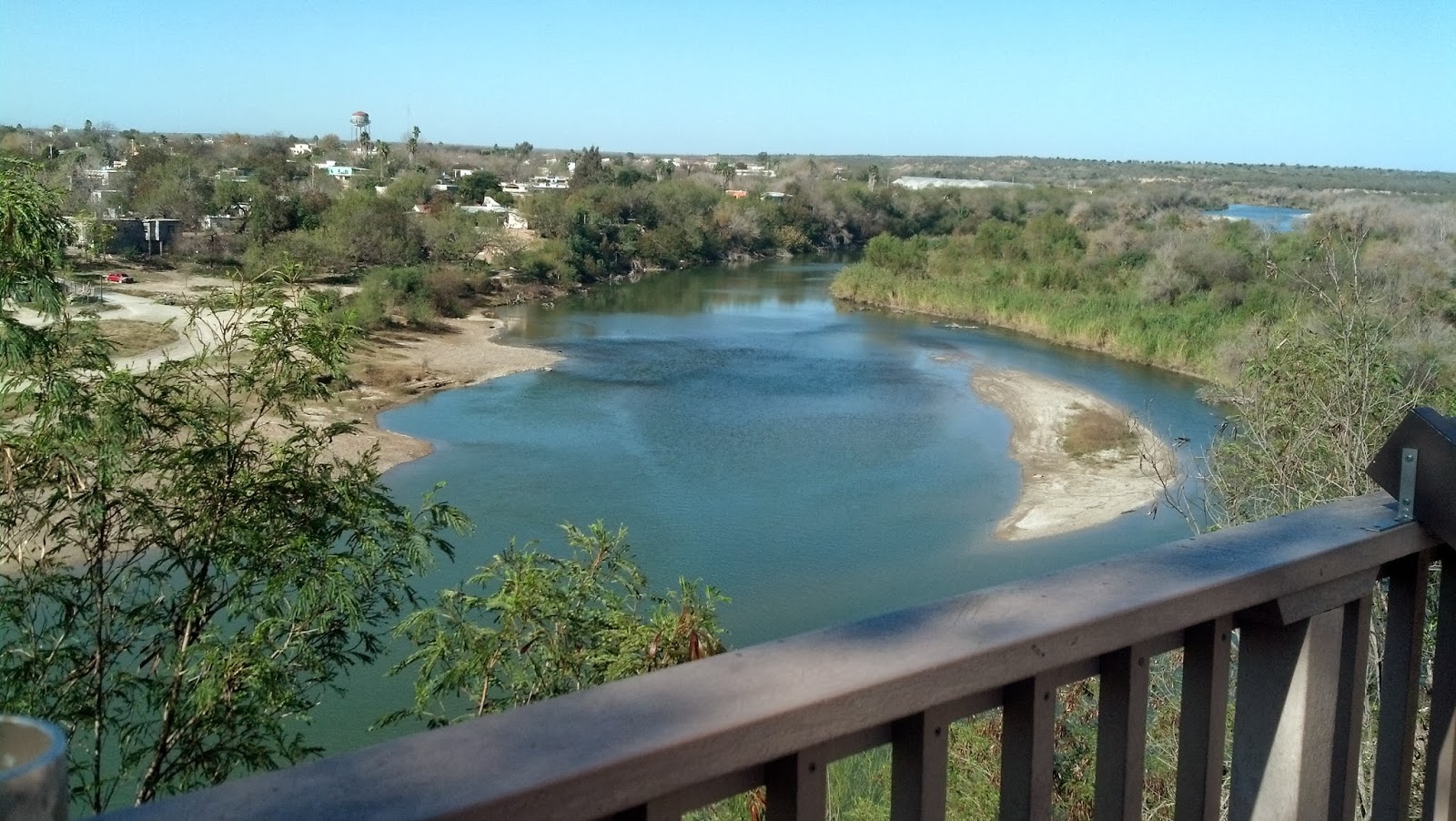 The river narrows here and looks like an easy trip from one side to the other.  Nothing interesting while we were here but our co hosts visited a few days ago and witnessed a raft of immigrants paddling across, in broad daylight, in full view of several Border Patrol officers sharing the viewing deck with them.  The officers told our neighbors there were Border Patrol at the landing and this event was not unusual.  Desperate people do desperate things. 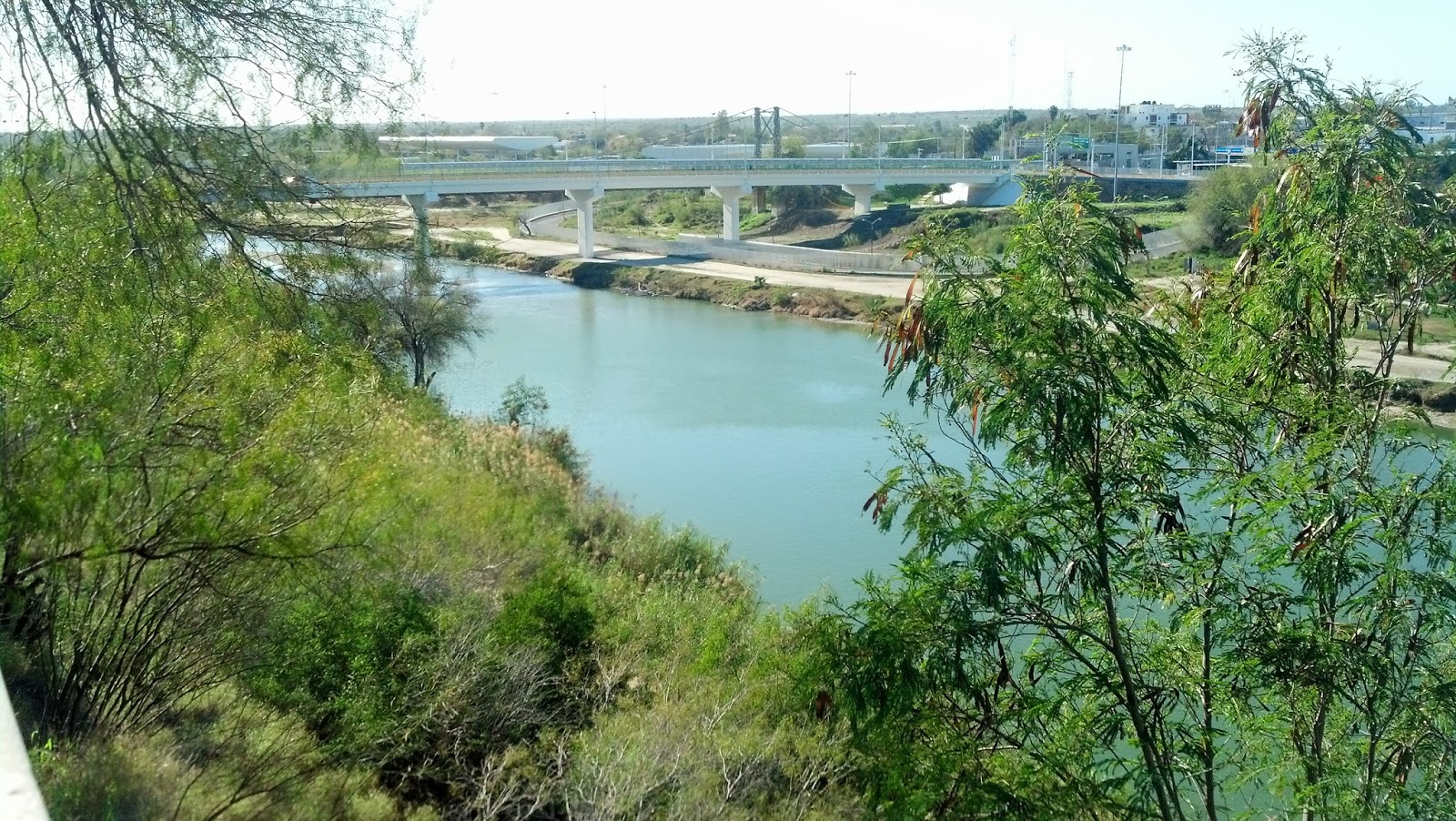 The Roma-Ciudad Miguel Aleman bridge, built in 1979 now provides access to and from Mexico. Looking to the far side of this newer bridge you can see the towers of the previous crossing.  This older Roma International suspension bridge, built in 1927, has been renovated and is planned to be open for foot traffic sometime in the future.  Made me think of the old Bucksport suspension bridge that is gone forever. 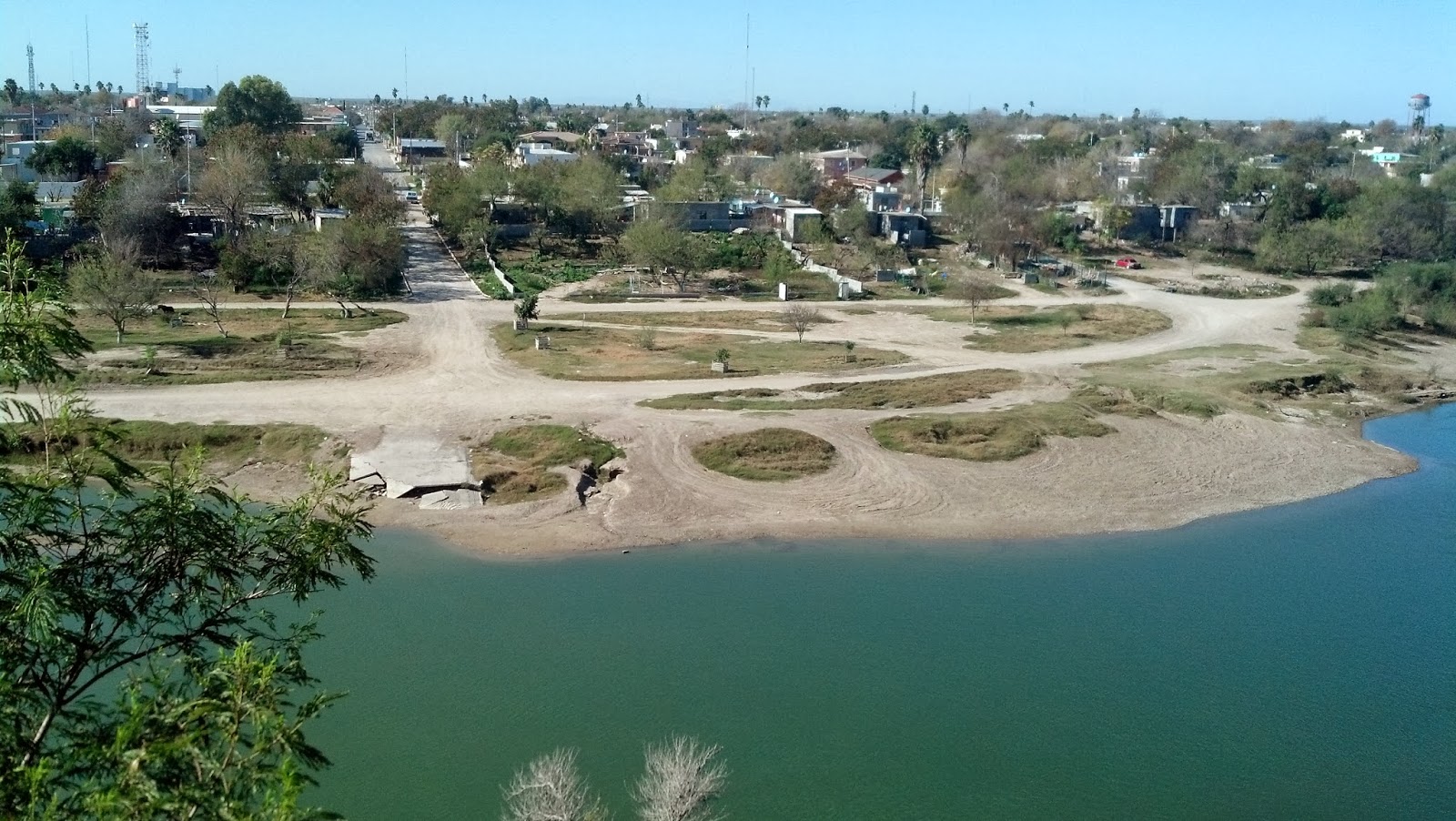 Of the nine World Birding Centers that are located along 120 miles of the Rio Grande river, Roma Bluffs is the furthest west.  The WBC Visitors center there is located in the Roma Historic District. It is owned by the city but operated by the US Fish and Wildlife Service. This small facility is housed in one of the historic buildings and includes several small gardens and patios.  The day we visited, the docent explained the reason there were no birds in any of the gardens.  Apparently a hawk had been spending the last two days perched in a tree over looking the center waiting for an easy meal. 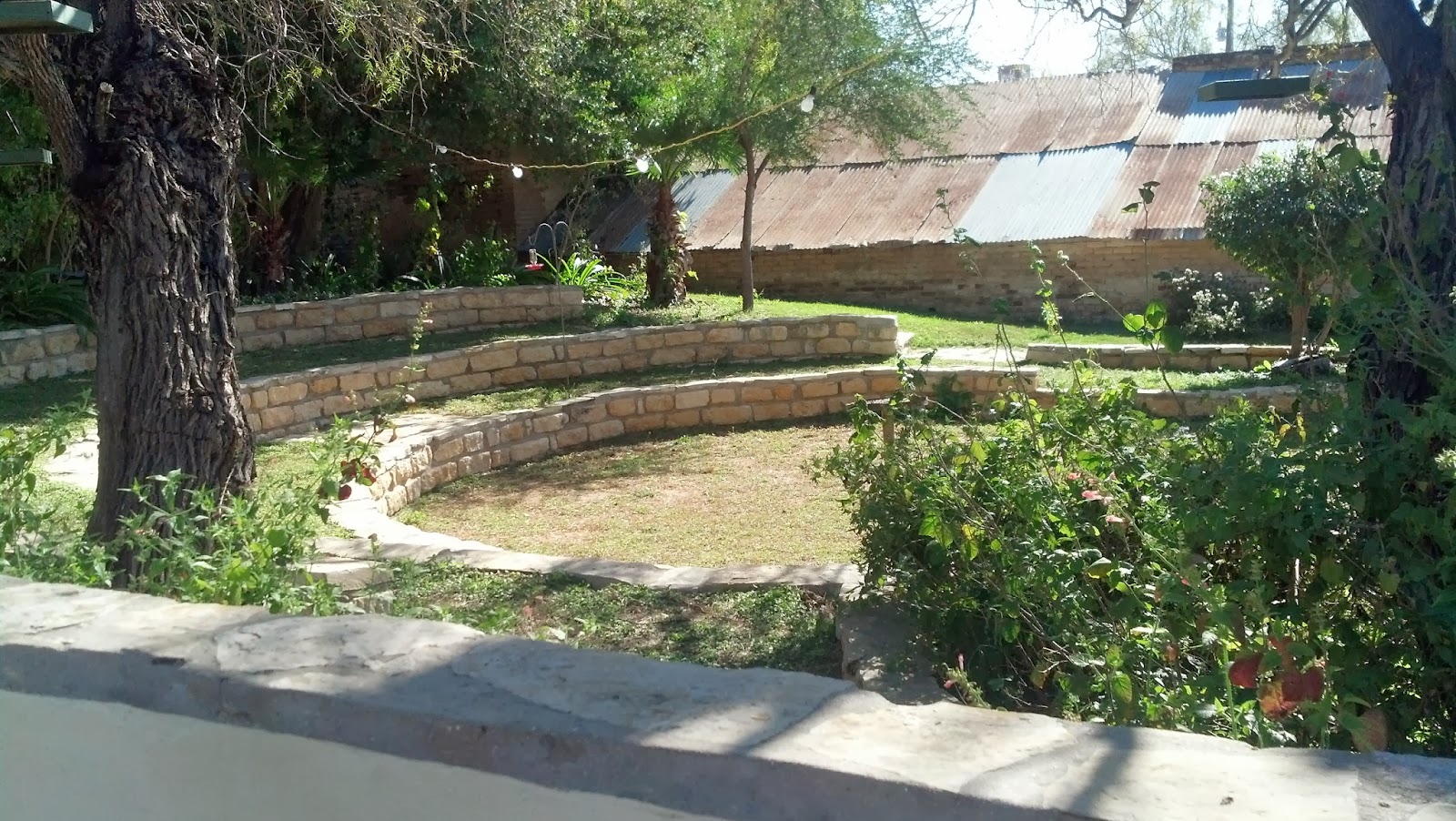 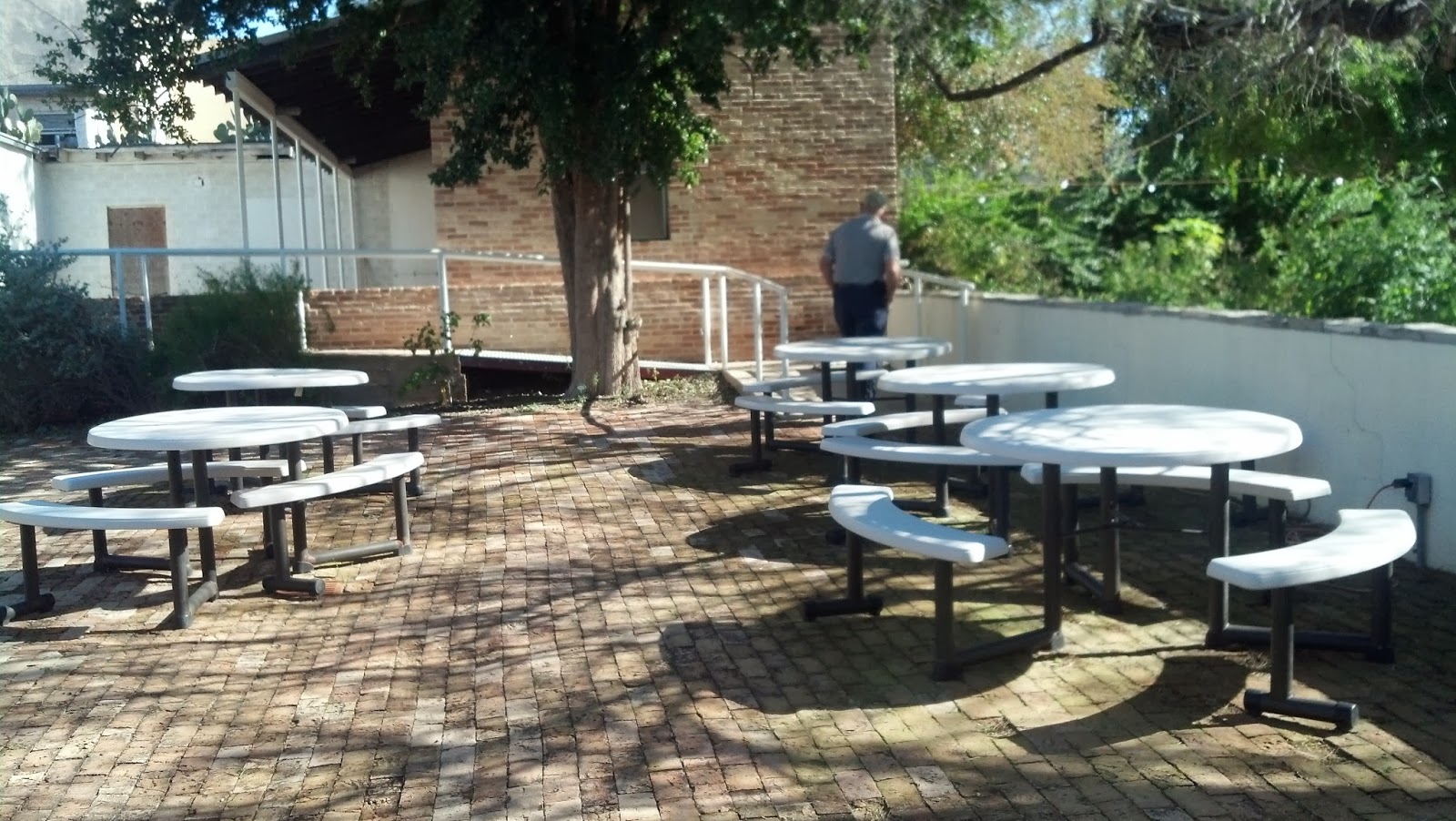 Roma was designated a National Historic Landmark district in 1993.  A nine square-block area  traces its roots back to the Spanish Colonial colonists in the 1760's. More than 30 buildings in this area were constructed in the 1880's 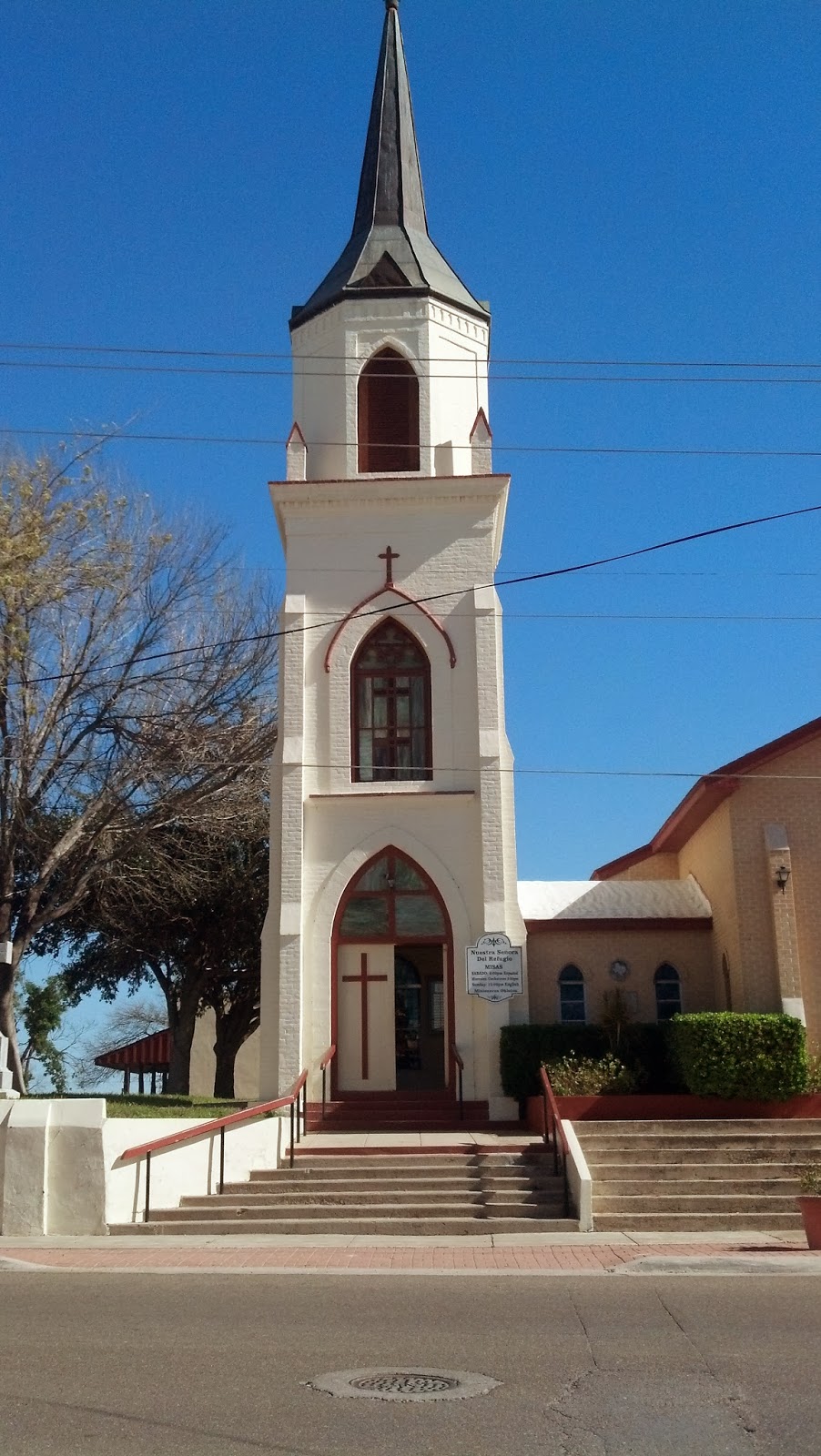 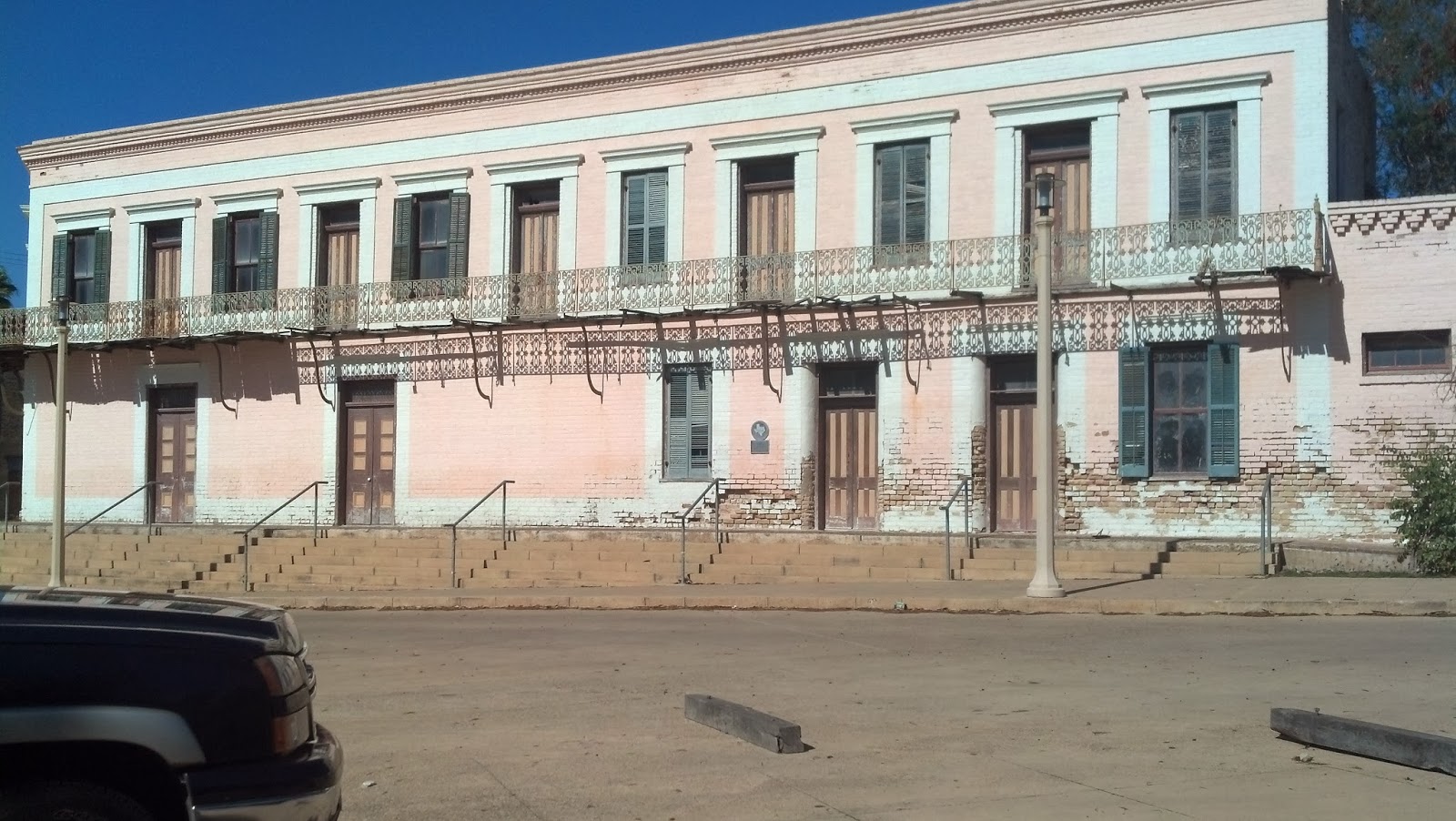 The Manuel Guerra residence and store was built by Enrique Portscheller in 1884  This was one of Roma's leading merchants in that era.  When this building was restored in the 1990's, exhaustive research was conducted in order to match the original exterior colors.  Unfortunately, it looks like it has not been maintained since then. 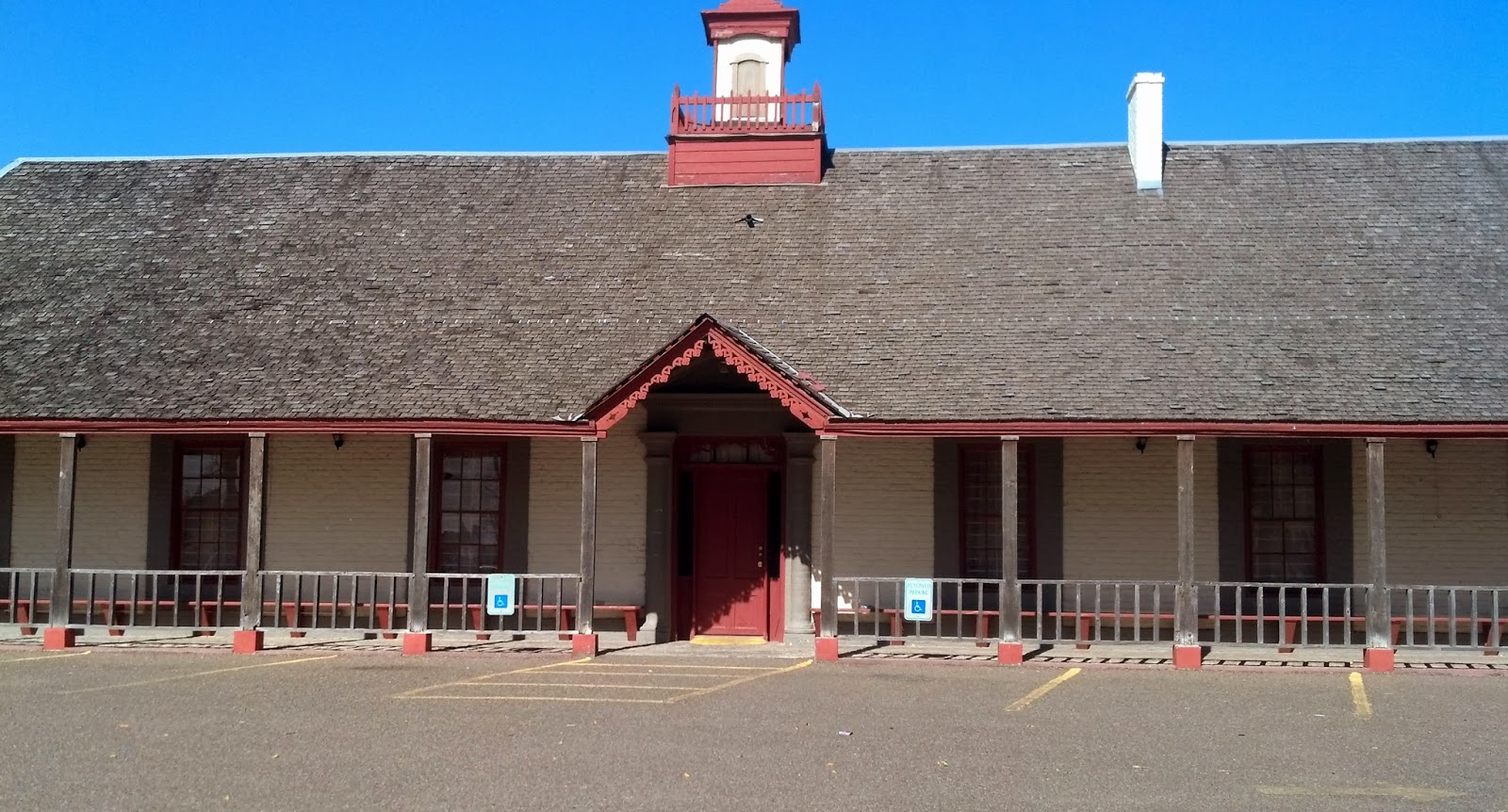 The Parish Hall, built in the 1880's, originally housed the convent of the Sisters of the Incarnate Word, and later, the Sisters of Mercy  It was also built by Enrique Portscheller, an Austrian mason who constructed many of these historic buildings.

Roma has a long proud history, hope they can keep it going.

Saturday night dinner with our co-hosts Fred & Charlotte and Peggy.