On March first we left John Miles and Naples, FL. We had a reservation at Collier-Seminole State Park in the Everglades. We have visited this park several times but have never camped here before. We wanted to spend a bit more time exploring the Everglades. One of the places we explored during our three days in the park was Everglades City. This once boom town was created by Baron Collier around 1923 as a base for construction on the Tamiami Highway. Today the original laundry building, has been renovated and turned into a museum of local history.

One of the first things we noticed in the building was a small scale model of the "walking dredge' that was used to construct the Tamiami Trail through the Everglades. I posted pictures of the dredge when we stopped to see it on our way to Key West in February. 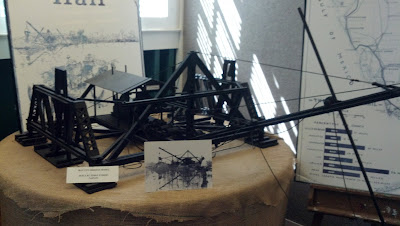 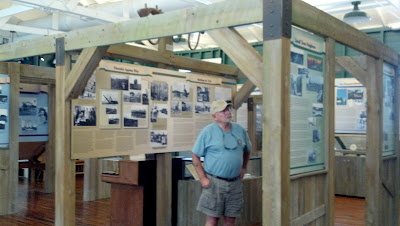 Some of the exhibits inside the old laundry 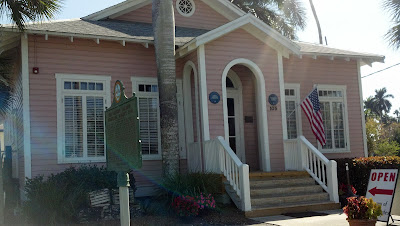 The old laundry building, now a museum in Everglades City


A short four miles down the road and over a bridge is Chokoloski Island. Back in 1897 a man named Ted Smallwood opened a general store on the island. He became postmaster and housed the post office in his store and remained postmaster until 1941, when his daughter succeeded him as postmaster. The building is currently a museum run by his granddaughter and was placed on the National Register of Historic Places in 1974. 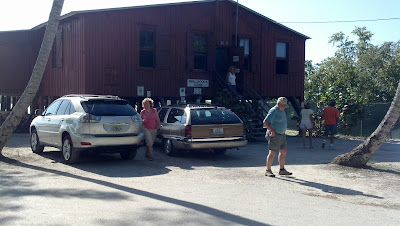 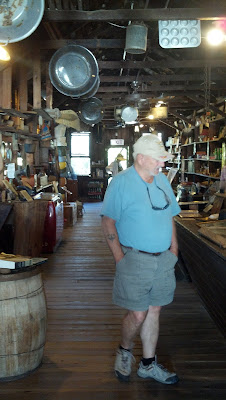 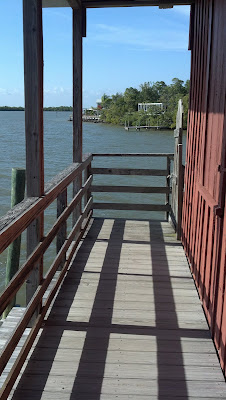 The rear of the store is over the water and was a beautiful scene with a pleasant breeze.

Back at Collier Seminole Park we walked down to the boat dock in the late afternoon to see a great wildlife show. We were sitting on the dock enjoying the sunshine and watching an osprey circle the water. He circled quite a few times when he finally spotted a fish in the water. He missed the first one but after a few more turns he dove again and was successful. 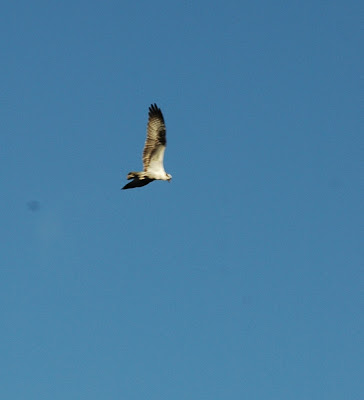 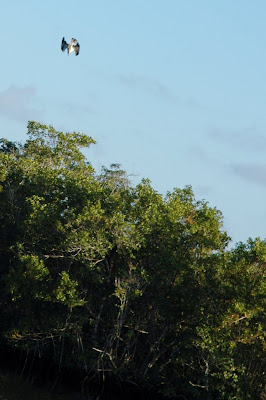 Diving straight down. What eyesight they must have. 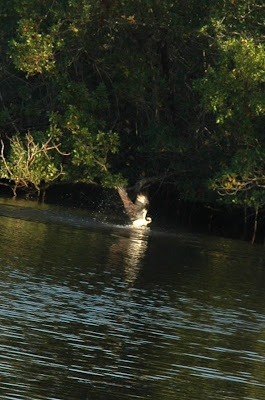 I mostly got the splash, but if you click on the picture it will enlarge and you can see the bird 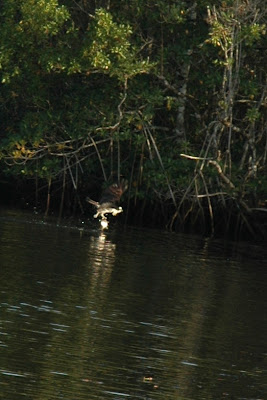 And his catch, which was almost too heavy for a take off

About fifteen minutes later, a gator that had been on the opposite side of the boat landing, saw something interesting in our direction. He slowly glided in our direction, getting closer, and closer, 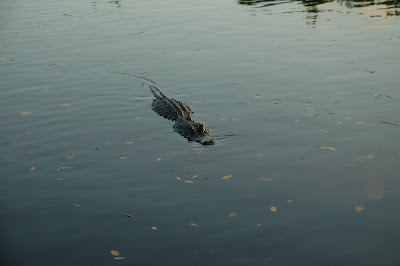 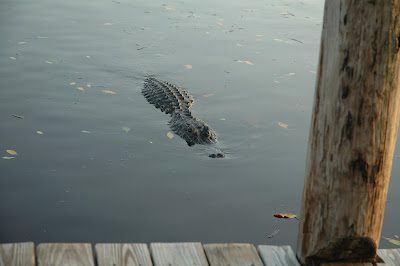 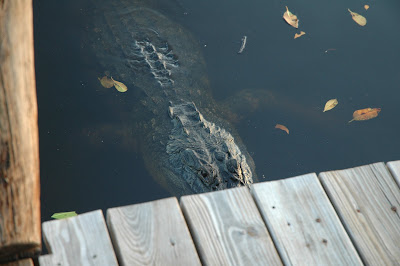 and closer. I was standing right at the edge of the dock about two feet above him, taking this shot 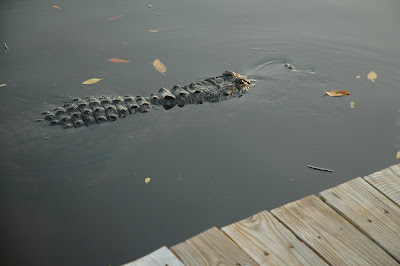 Guess we were not very interesting, so he swam away. 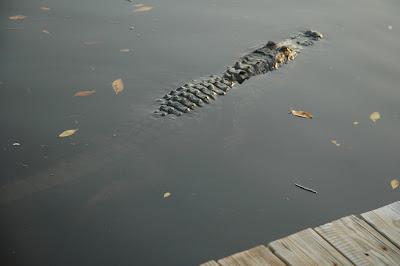 The weather here has been unusually warm, as it has all across the east coast. Of course that brought out lots of insects earlier than usual. Our three days in the Everglades resulted in lots of itchy bug bites. We were glad to move north.

We traveled across the Everglades toward the Atlantic coast, then north. We stopped for a delightful lunch with some Massachusetts friends, Jean and Bill Claffey, who were spending some time in Boca Raton.

Continuing north, our next stop was at Jonathan Dickinson State Park in Jensen Beach on the East Coast. We stopped there for two nights and visited with Del and Shelia Hartt from Hermon. Had a great day with them but somehow the pictures we took there have disappeared. Jonathan Dickinson State park is located on the land that was once the first radar training facility for the Army during World War II. Radar was in its infancy at that time and the base was top secret. Historians are still searching for information about what was accomplished here.

Still moving north we spent a few more days walking on the beach and camping at Tomoka State Park near Daytona.

Next stop was in Savannah Georgia. We spent a warm summer-like day walking through Lafayette Park and several of Savannah's famous squares. Thanks to a determined group of women in the 1950's, 22 of the original 26 squares and surrounding homes were saved from demolition and development. When developers began to demolish some of the beautiful old houses, these women found buyers who would agree to renovate the properties and not tear them down. I bet the prices today would scare you. 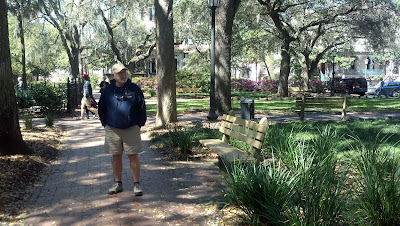 One of the squares near Lafayette Park 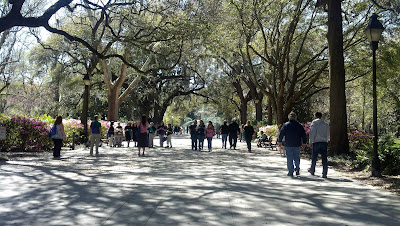 A walkway into the park 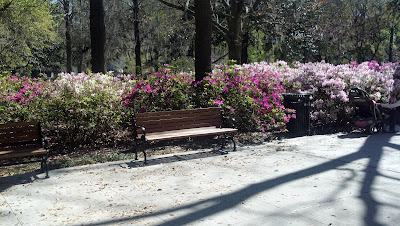 Thousands of azaleas were in bloom. 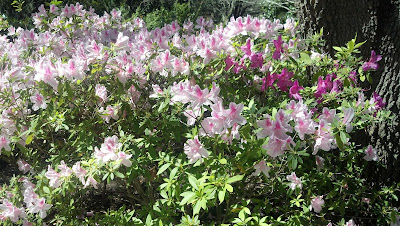 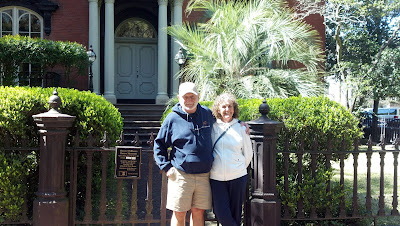 We took a tour of the Mercer Williams house which was featured in the movie Midnight in the Garden of Good and Evil. A young couple took our picture and we took theirs. 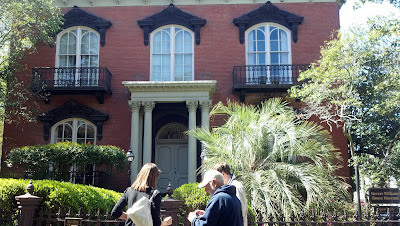 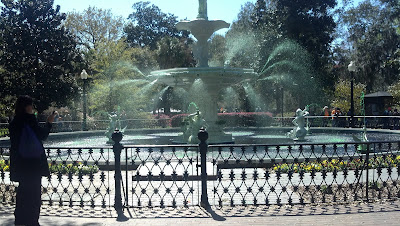 The fountain in Lafayette park was sporting green water in honor of St. Patrick's Day 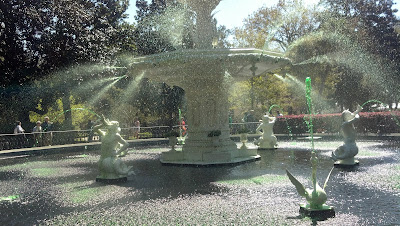 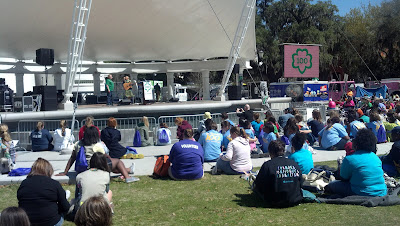 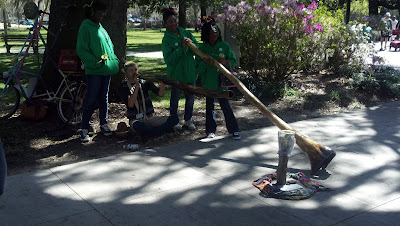 A street musician was entertaining some scouts with his digaree doo. Not sure how that is supposed to be spelled but James used to play one so I knew what it was.

On to the Outer Banks and Ben Baldwin's wedding.
Posted by cooktravelogue2007-8.blogspot.com at 9:47 PM