The ferry boat LeConte took us on the eleven hour ferry trip from Juneau to Sitka as we traveled in and out of winding passages that snaked through the islands of Southeast Alaska. This leg of the journey provided us with many whale sightings. Just outside the harbor we passed a pod of about five humpback whales, and had the pleasure of getting a look at a half dozen more throughout the day. 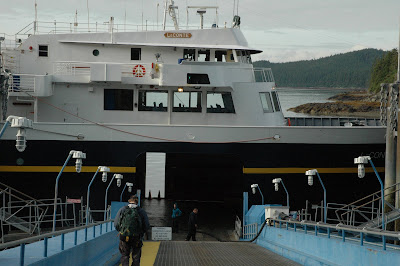 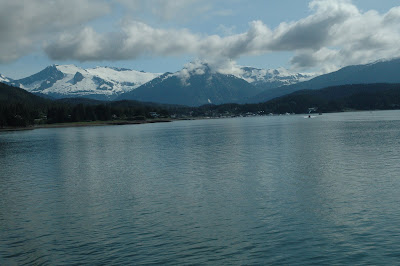 We arrived in Sitka about 8:30 PM and were met by Joyce and Allen Brackley. The Brackleys, originally from Maine, are friends of Deanna and Larry Philbrick, so when we told Larry we were going to Sitka; he made the connection for us. We expected to meet the Brackleys and perhaps spend a couple of days fishing with them. However, Joyce and Allen took us completely under their wing and entertained us for the entire week we were in their town.

Sitka is actually south west of Juneau. The city sits inside a sheltered harbor that is on the Pacific Ocean, unlike the other ferry stops on the inside passages that are away from the direct ocean. It is larger than we expected and with five separate marinas, you realize that fishing is the main occupation here also.

In addition to the commercial fishing, Sitka has a large sport fishing industry. The marinas have many fast, sleek aluminum boats that cater to fisherman who fly into Sitka for a week of Salmon fishing. Reading the bumper stickers in the parking lot that say, “Sport Fishing is Organized Crime” gives you the idea that the local commercial fishermen are not in favor of this type of commerce

The next day, after Allen had us park our camper next to their house, we headed out to do some fishing. His boat, called “The Office” is a comfortable 24-foot glasply, equipped with all kinds of equipment that was new to me and even to Marlin. Allen assured us we would be fishing with this equipment for much bigger fish than we would ever see in Maine. Over the next few days we worked on advancing our skills with the big rods, the down riggers, and general boat operation. 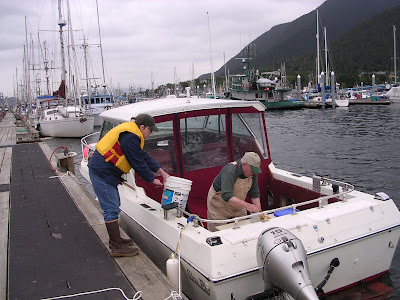 On our second trip out, I was lucky enough, along with Joyce’s encouragement and direction, to catch a Pink Salmon, a Coho Salmon, and 10-pound King Salmon. Thinking that was quite a trophy fish, I was really amazed, when a couple of days later, Marlin hooked onto a 30-pound King. This fish took up the entire length of the three-foot cooler. Marlin also caught a Coho salmon and a Yellow eye rockfish that day and Joyce claimed this ugly orange fish makes the best fish chowder. 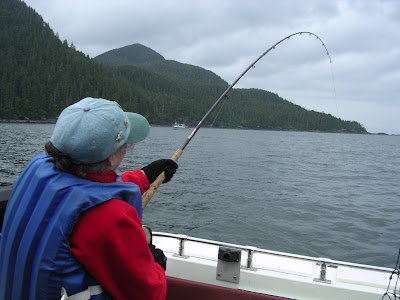 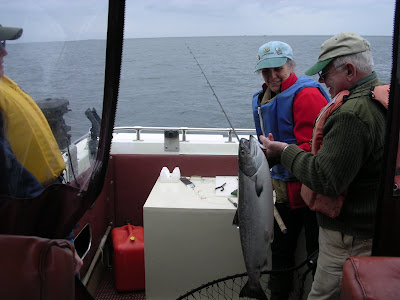 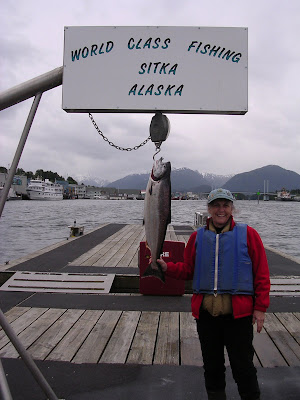 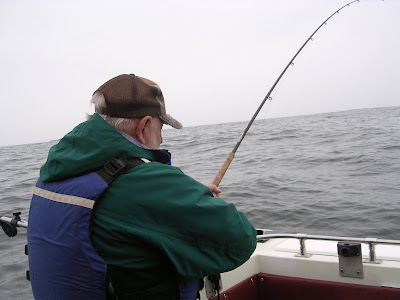 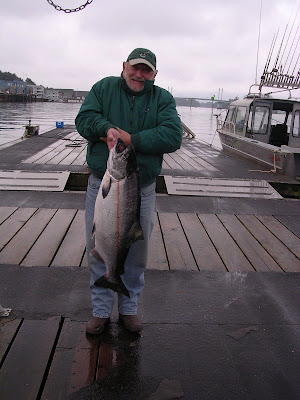 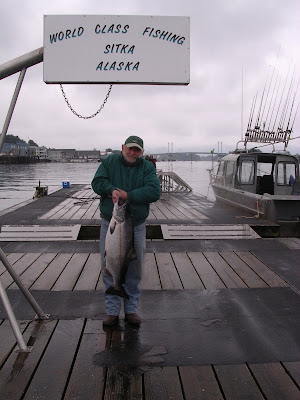 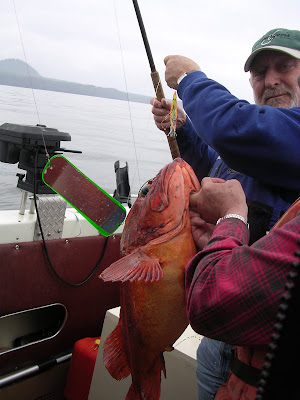 Allen has obviously dressed mountains of fish over the years because he filleted each days catch is short order. The big King, he brought home and cut into Salmon steaks, two of which were cooked over charcoal and sampled for dinner. Nothing tastes as good a really fresh fish and this was the best I had ever eaten. After dinner Joyce and I lined up the steaks, vacuum packed, and froze them for shipping back to Maine. We will have fish to share with everyone we know for the next year. 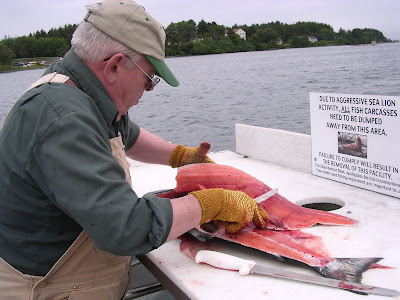 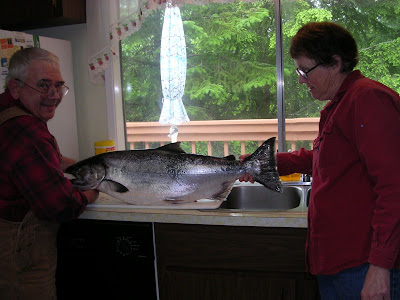 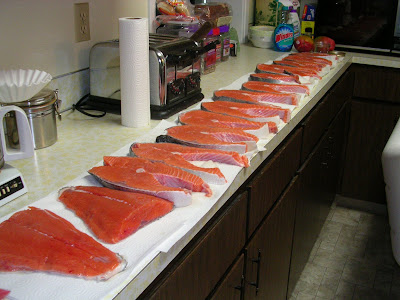 Joyce also had a turn at catching a big one. She had one heck of a job reeling in a 20 pound halibut, but it is her favorite catch. Needless to say, we had beer batter halibut for dinner that night. The Brackley's were treating us to the best Sitka has to offer. 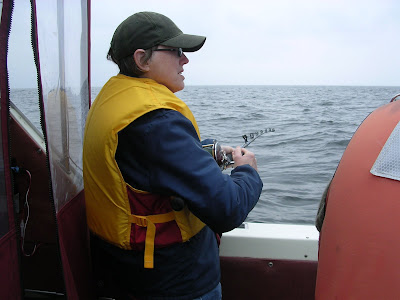 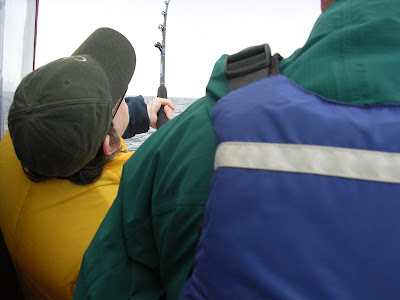 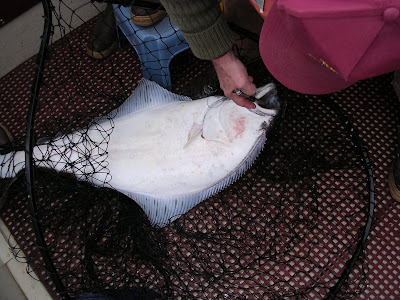 On a rainy, windy day we stayed on dry land and visited a few attractions in Sitka. The Sheldon Jackson museum houses Native artifacts collected during Jackson’s time in Southeast Alaska as a missionary. Many exquisite examples of baskets, kayaks, bentwood boxes, tools, and clothing, are exhibited in a round building on the grounds of the Sheldon Jackson College. The college is unfortunately closed, due to financial difficulties. It was disappointing that Jackson felt the need to write his name in black ink on every artifact he possessed. 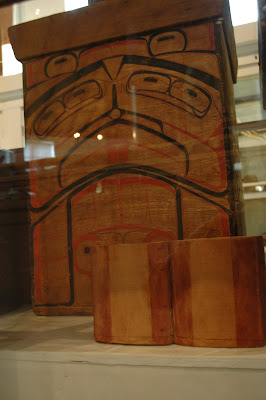 One of the bent wood boxes in Jacksons Collection. In the foreground are two small attached boxes that are made with the same technique. 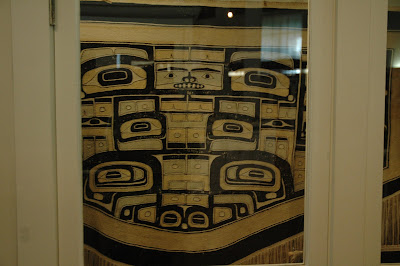 A Tlingit ceremonial robe made with mountain goat hair and strips of cedar bark
That afternoon we attended a Native dance exhibition similar to the event we went to at Totem Bight. This group had a narrator, who explained the significance of the dances and gave a more detailed background on the Tlingit culture and traditions. As at Totem Bight, the dance group included children of various ages as well as adults. A small boy of about 8 years began the program when he appeared in a raven mask, mimicking the bird’s movements, as he circled the stage and fire pit. 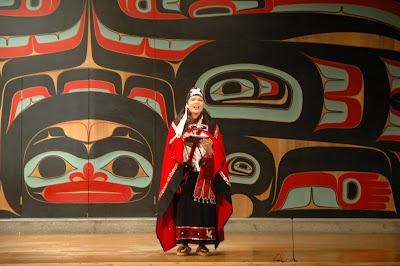 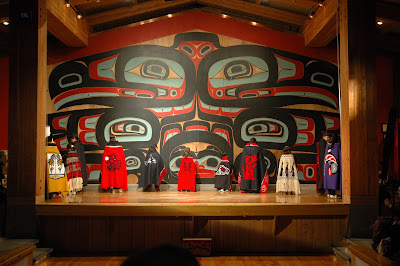 The dancers with their backs turned toward the audience in order to show their clan insignia
Our final stop that day was to the Alaska Raptor Center. This facility, which specializes in raptor rehibilation, houses an animal clinic and two flyways where recuperating birds can regain their flying strength, and an auditorium for educational presentations.
Presently there are half dozen bald eagles, a couple of immature, and a golden eagle in permanent residence because their injuries are irreversible. One of these magnificent eagles sat calmly on a handler’s arm, while the man talked about eagles, frequent accidents, where and how they were found, the center’s activity, and also answered questions from the audience. 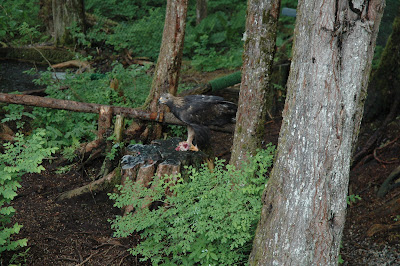 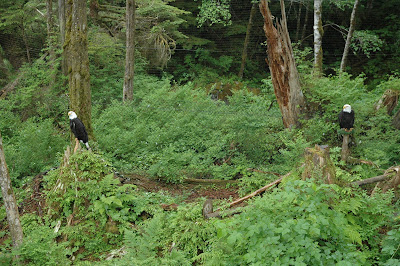 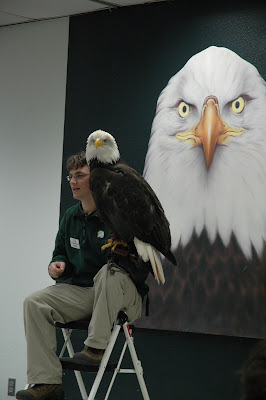 
The last day we went out fishing was a partly cloudy day with no wind. It must have been ideal weather for eagles because we saw dozens of them that day. In the marina, there were four mature and two immature birds roosting on boat masts directly across from the Brackley’s slip. Because the water was so calm, Allen took us out past Bird Island, where hundreds of Horned Puffins nest, then into the open ocean as far as Edgecomb point, where we set our lines and trolled an area called the whale’s tail, named after the shape of the ocean floor. 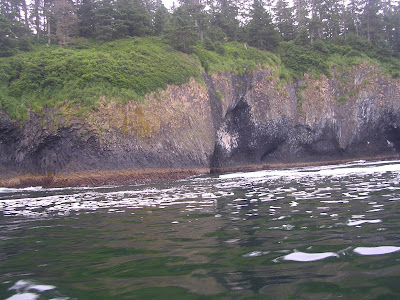 Bird Island. There were dozens of Horned Puffin in the water that do not show up in the picture

It also appeared to be a day for catching rockfish, because we were catching them by the dozen that day. The rockfish would be reeled in, unhooked, and plopped back into the water. They would often float on the surface before reviving to swim away. When they stayed on the top too long, an eagle would soar in, drop down and scoop up the rockfish in its talons then fly back to where he came from on the island, which was at least ¾ to 1 mile away. I was never quick enough to get a picture of this exciting happening, but it certainly made catching those pesky rockfish worthwhile.
Too soon, our seven days in Sitka with the Brackleys came to an end. We cannot thank Joyce and Allen enough for their hospitality and generosity while we were there. They made the week in Sitka the highlight of our trip so far and we now have good friends in Alaska.