Haines was our last stop on the Alaska Marine Highway system. Since departing the inside passage our travels have been in and out of the mountain ranges, along magnificent rivers and side trips on long dead end gravel roads. As much as we enjoyed all the rural towns and cities visited by water, we feel more in our comfort zone here in the wilderness. 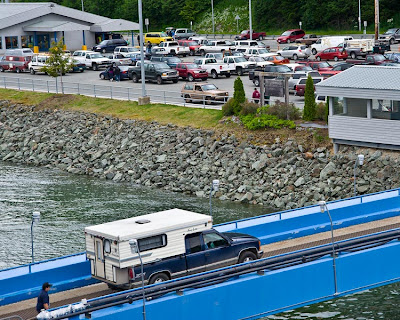 Our last departure from the Alaska Marine Highway

The pictures below highlight only a small portion of the wonders observed, partly because of the hazy smoky atmosphere we traveled through. Over 50 fires are currently burning in an area around Dawson and Fairbanks, so any views of the mountains were limited. Phone and Internet access were also sketchy.

While in Haines, we camped at Chilkoot Lake State Recreation Area, which was about 10 miles outside of town. The approach is along the edge of the Chilkoot River and the park is in a conifer forest at the edge of the Lake. I had been reading If you Lived here I’d Know Your Name by Heather Linde. Heather is a long time resident of Haines. It was fun spotting places that I had had a preview of in her writing. 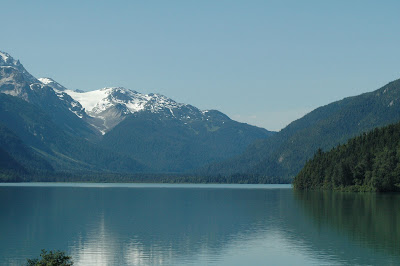 Chilkoot Lake. The campground was along the left side of the lake 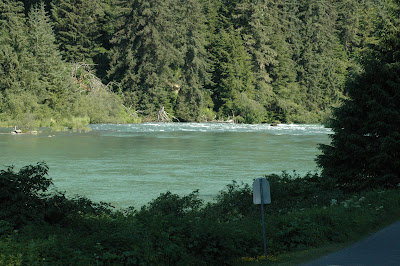 Chilkoot River that runs out of the lake

Haines is the home of Fort William H. Seward, named of course, after the Department of Interior gent who purchased Alaska from Russia. Remember Seward’s folly from U.S. history? This deactivated Army post is now B & B’s, private homes and the eclectic Halsingland Hotel. The original fort, established in 1898, was to provide law and order for the rowdy miners. 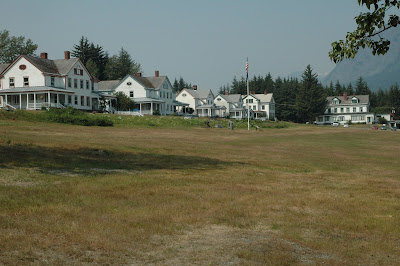 My favorite attraction in this quirky little town was the Hammer Museum. Begun by a man named Dave Pahl with his own collection, it has grown to over 1,500 specimens that includes a case of “What was this used for” hammers. People just keep sending him hammers of all kinds. The young woman docent knew the history of all the interesting pieces in the building. We thought she had been doing this for years but she assured us she had only started there 9 weeks before. Oh to have the fresh neurons and synapses of the young. 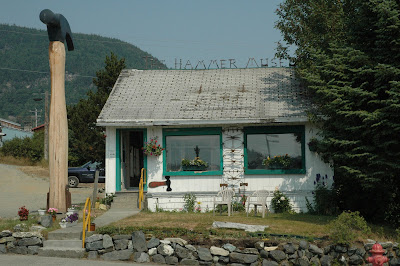 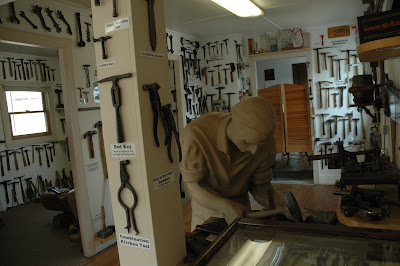 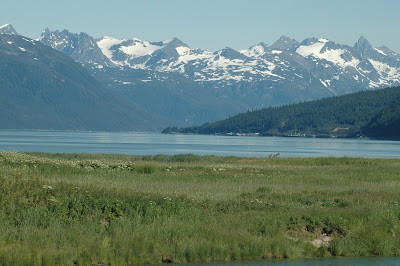 The view from Haines city limits 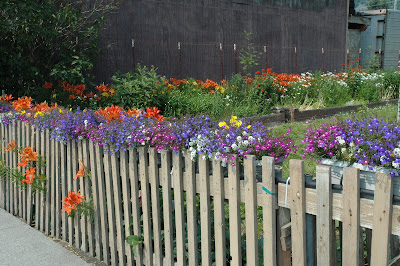 We stopped at the Alaska Indian Art Center and were treated to a totem in progress. Actually, it was half painted and only needed the addition of some minor carving details before it could be shipped off to the Adirondack Mountains in New York State. This facility receives commissions for work that is sent all over the world. 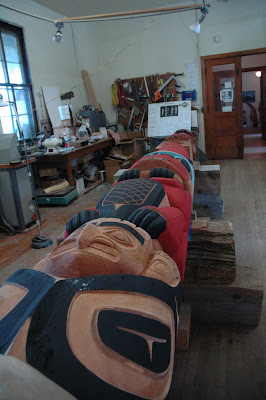 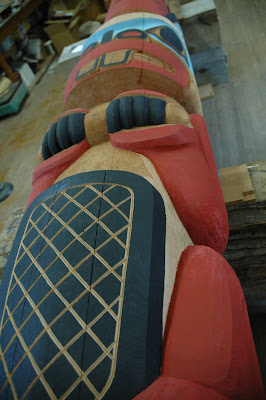 Beaver with his tail

Between Haines, which is in Alaska, and Haines Junction, which is in Yukon, Canada, the road follows the Chilkat River for a time. Along the river there were several fish wheels. We were told these are used to sample and count the migrating salmon that are coming up the river to spawn. 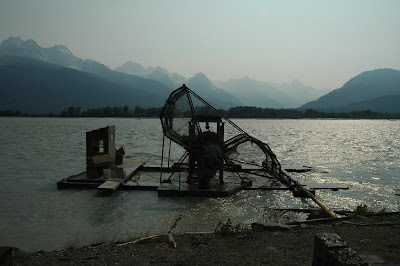 A section of this river, just outside Haines, had been designated the Chilkat Bald Eagle Preserve. In the fall there is a very late run of spawning salmon here and an estimated 2,500 to 4,000 eagles come to enjoy the last easy bounty before heading for their winter stomping grounds.
During our Inside Passage cruise back in 2003 (?), we booked an excursion to this renowned Eagle site. Our pal John Miles loves eagles, and where else could you see the most eagles in Alaska, right? Well they did not tell us that this congregation of our National Symbol occurs in October and November. We saw exactly two eagles that day, and while here on this trip, we did not see any. Looks like we need to make another trip during November if we are to witness the Council Grounds packed with Eagles. 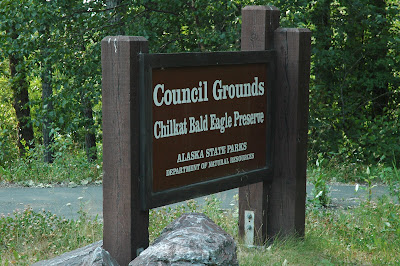 I took this for Linda & John Miles and John & Mary Cole to remember our last trip here. 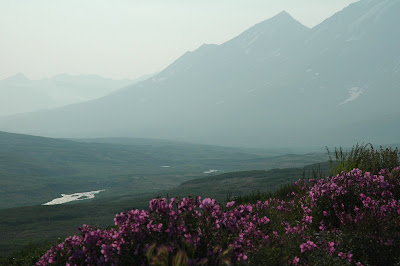 Dwarf fireweed with the smoky mountains in the background 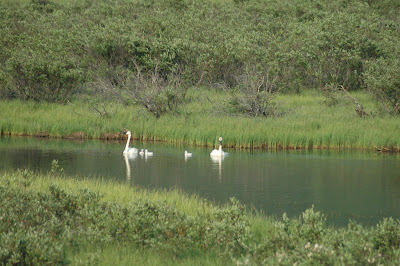 Trumpeter Swans seen along the road. Large numbers of these and the Tundra Swans, who are slightly smaller, nest here 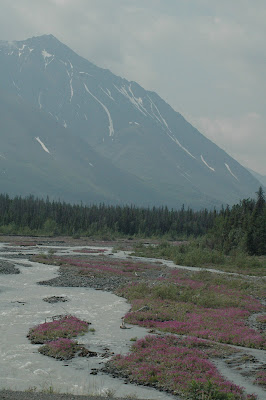 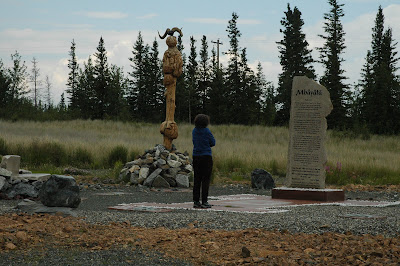 This monument to a 21 year old Native American was just at the side of the highway. Beautiful carvings were on all the rocks surrounding the central obelisk 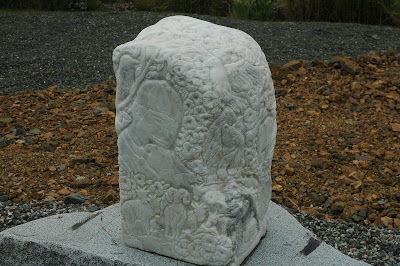 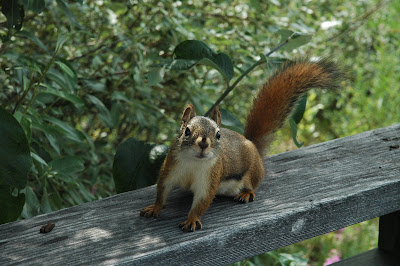 The campground experiences we have had range from the majestic to the whimsical. In Tok, an ad for Sourdough pancakes tempted us to pull into the Sourdough Campground. It not only advertises, “All you can eat sourdough pancakes”, they boast that it is the campground where you will have the most fun. Who could resist all that hype?

One piece of the “fun” was a nightly pancake toss. The object was to land a pancake in a bucket that was about 30 feet away. About 30 to 40 people were in attendance, most gave it a try and only three participants hit the bucket. Marlin was one of them and got a token (one corner of a pancake) for a free breakfast the next morning.

At the end of the official “toss” the young man, who had been adding local color to the spectacle, asked two couples if they would like to play another game. They were agreeable, so he set the husbands up with buckets on their heads, gave the wives large stacks of cakes and instructed them to throw as fast as they could. The winner turned out to be a softball player with a husband who had a good sense of humor. It was fun 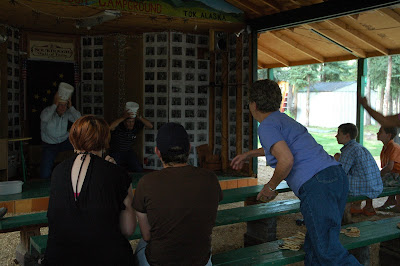 In Wrangell St Elias National Park and Preserve we spent a couple of nights camped on the 43 mile long, dead end Nebesna Road, checking out fishing conditions in the many accessible small ponds. The sign below was the “local color” here. We choose not to camp here. 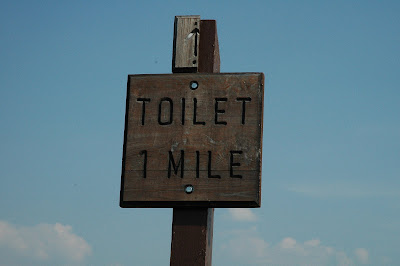 The next off shoot from the highway investigated was the road to Lake Louise. Here again are dozens of small trout ponds just a short distance off the road. We checked out quite a few of them, and stayed in a former Military vacation spot. Dwight D. Eisenhower once stayed in a cabin here to enjoy the fishing and quiet after returning from WWII. 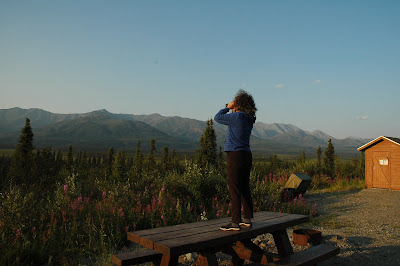 Checking out the lake just below this camp site. There was one lonely swan there. 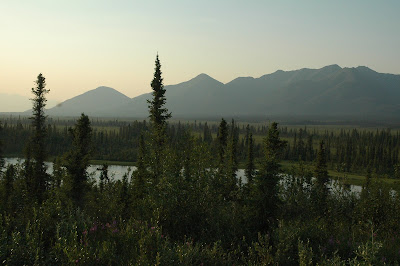 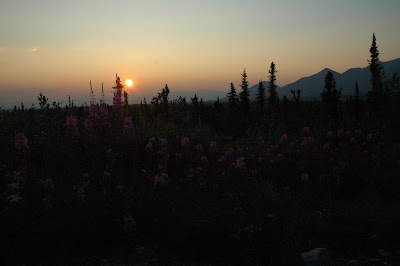 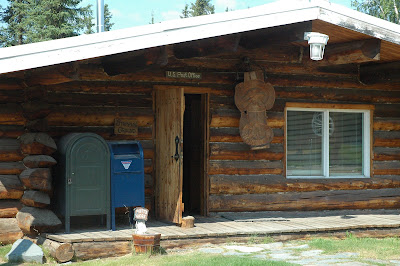 This was the post office located at the Hart D ranch, which includes a lodge and restaurant and run by a local sculptor, Marion DeHart. It is currently for sale. Breakfast at Lake Louise
Between Lake Louise and Anchorage the road passes the Matanuska Glacier who’s upper basin sits at an elevation of 10,000 feet where it may snow any day of the year because summer temperatures average below freezing. An information sign said that 75% of the world’s fresh water is stored in glaciers. If all the land ice melted at once, the sea level would rise 231 feet world wide. 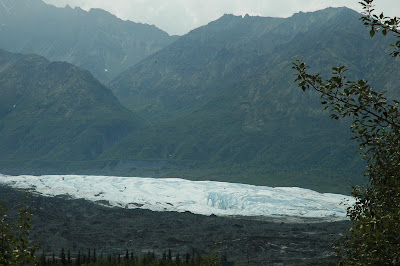 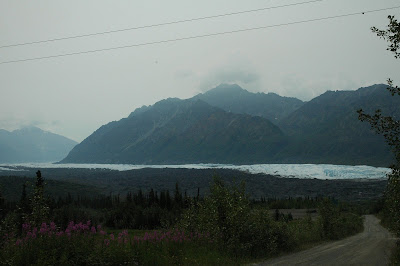 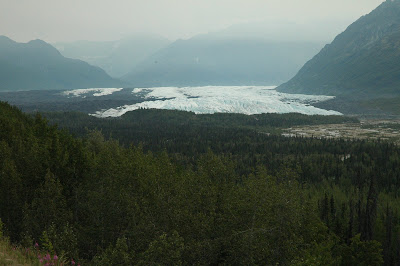 We made a quick stop in Anchorage to have our truck checked out and decided to head on to the Kenai Peninsula. We will stop to see what the city has to offer on our return trip.
Posted by cooktravelogue2007-8.blogspot.com at 1:09 AM