After leaving Brownsville, we stopped to visit good friends we had volunteered with at Bentsen Rio Grande State Park, the first year we decided to try out the Park Hosting experience.  Fred and Charlotte are full timers and are currently hosting at Colorado Bend State Park, west of Killeen, TX. 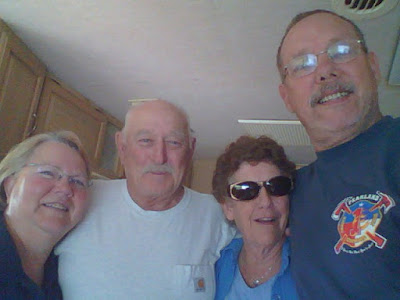 To add to the excitement of seeing Fred and Charlotte again, there was a flood warning for the Colorado Bend area.  Just before we arrived, the park was closed and all the campers had to leave because the entrance to the Park required crossing a local creek. 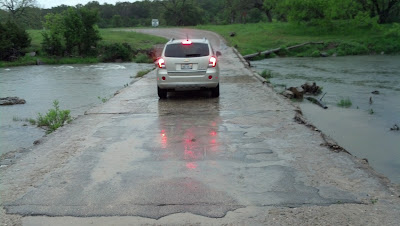 When this creek rises it completely covers the road and it often takes several days to recede.  We decided to gamble that we would not be on the wrong side of this waterway.  We were right.  No flood while we were there.  All that water went on its way to Houston, and they certainly got more than their share.

Exploring some of Colorado Bend State Park with Fred and Charlotte 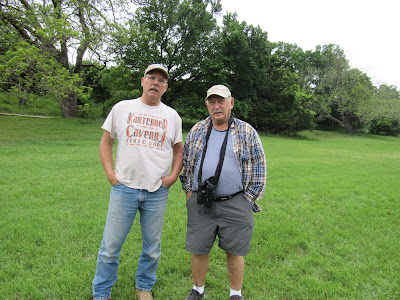 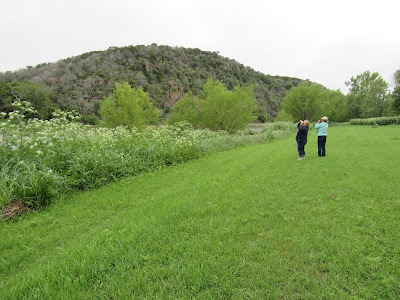 The Colorado River was on the other side of the flowers.  Charlotte and I were following a red tailed hawk flying across the river. 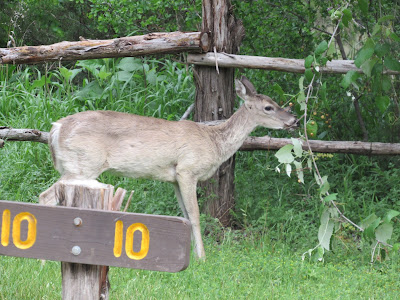 
We spent three days exploring their new park, sharing some good food, and playing a few rounds of cards.  Great to touch bases with them again.  Charlotte suggested we take a short side trip to Santa Fe to see the Loretta Chapel, so we did just that.

Went on line to find an RV park to stay in that was close to the city and decided on one called Trailer Ranch.  As we were driving in, I realized it looked familiar.  Sure enough, we had stayed here back in 2007 with the Burwells and the Baldwins when we were on our way to the Balloon Festival in Albuquerque.  Julie had a picture to prove it.

Here we are today. 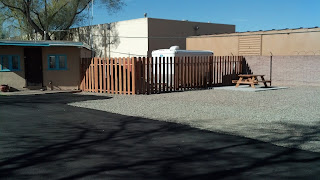 Santa Fe is growing like all cities these days.  It has its share of fast food joints and strip malls,but the City requires that all the buildings be built in the adobe Pueblo style, so the entire town is beautiful sand or terra cotta color. 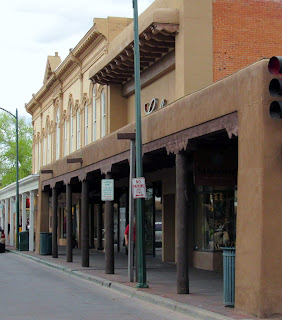 The Saint Francis Cathedral Basilica was built around an old parish church between 1869 and 1886. The Cathedral dominates one end of the famous "Plaza" of Santa Fe.  The design is of Romanesque Revival style, and is in contrast to the surrounding adobe structures. The Cathedral style was influenced by Jean Baptiste Lamy, who was the French-born Archbishop of Santa Fe when the Cathedral was built. 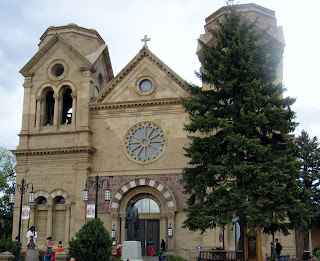 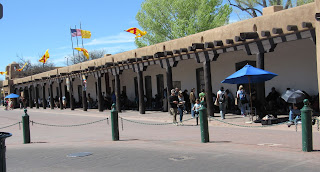 The "Palace of the Governor's", so named because this building was occupied by five different nations: Spain in 1610; Pueblos in 1680; Spain again in 1693, Mexico in 1821; the United States of America in 1846; and fifth, by the Confederate States during the Civil War; lastly again by the US Government.  This building is the oldest continually occupied public building in the United States and currently houses the New Mexico History Museum. 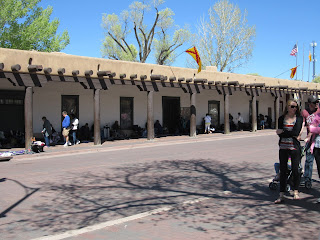 The area under the overhanging roof is reserved for Native American artists to exhibit and sell their work.  I came away with several pieces of turquoise jewelry myself. 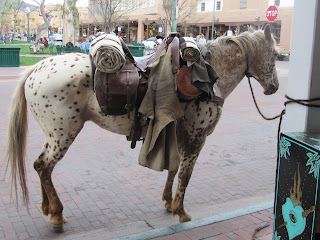 Interesting sights to be seen around the plaza. 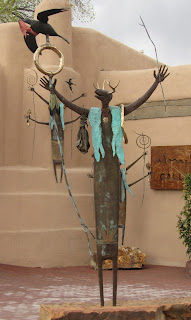 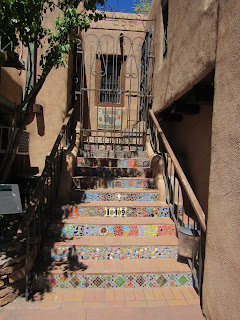 Beautiful art even on the stairways, 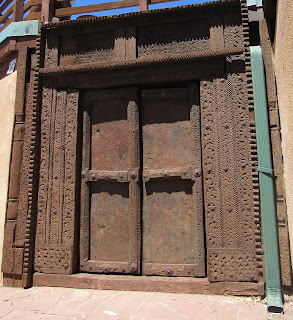 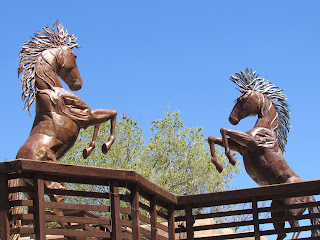 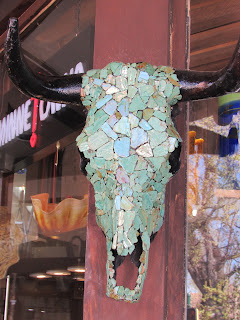 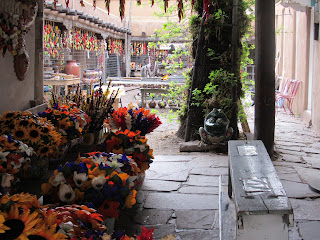 
The Loretto Chapel is a stone Gothic building completed in 1878 and commissioned by the same Archbishop, Jean Baptiste Lamy, who built the Cathedral.  The chapel was part of a 10 building school for girls that, at one time, had 300 students. 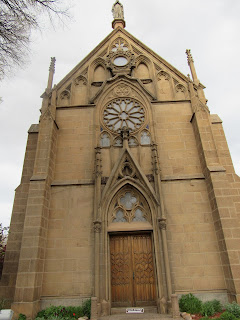 The small chapel, with outside dimensions of 100 long by 26 feet wide, left little space for an interior staircase.   When built, there were no stairs to the choir balcony.  In Europe it was the custom for the choir to be all male and they climbed a ladder up to the balcony.  With nuns' habits and girls' skirts that was impossible, so the nuns prayed for a solution.

The legend told today claims the nuns prayers were answered by the sudden appearance of a carpenter, who set to work with only a saw, hammer, and a carpenter square to work with.  The story claims he completed this work of art in either 6 or 8 months, leaving without pay. 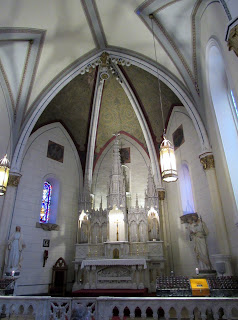 The staircase makes two complete 360 degree turns and has no central support.  Wooden pegs hold the construction together.  Engineers today are still baffled as to how the staircase can remain standing and not collapse.  The original stairway had no railing, this was added about 10 years later, at the request of the school nuns. 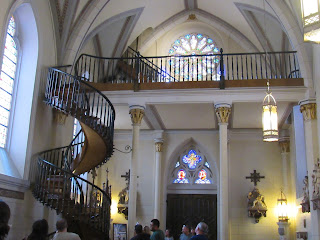 View of the staircase and the choir loft above.

Today the chapel is privately owned. It is open to the public as a museum and for wedding ceremonies.  The minimal $3 entrance fee is used for chapel upkeep and repairs.  The beauty of the chapel interior creates a very moving experience.  Definitely a highlight for any visit to Santa Fe.