First stops on this years trip

So sorry for the long lag in postings. We have been having annoying technology glitches. No access, then computer deficiency's. Anyway, here are our doings up to when we arrived in Florida.

Our 6 AM departure goal was only missed by an hour and a half on the morning of our exodus. It was 9 degrees and the usual “more than we thought” things to do, but we got it all done and set out about 7:30. Our first stop was at the Baldwin’s in Frederick, Maryland.

About half way there Marlin remembered that we said we were never again going to try to make this trip in one day. Oh Well, old habits are hard to remember to break. We arrived at their house about 8:30 PM and Glen had a wonderful Brisket dinner all ready for us. Over the weekend we played multiple card games of GOLF and Oh Hell, went to a neighborhood party, met many of their friends, and all in all had a great renewal visit. Their son, Ben, was also there that weekend so we got a bonus with our visit. 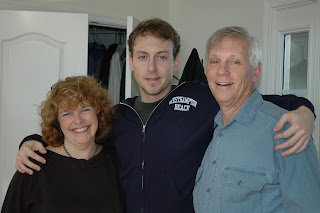 Their town of Frederick , which is an hour west of Washington, was farm country until several years ago when living any closer to DC became impossibly expensive. Today the many new housing developments are still surrounded by small villages with corn fields and cow pastures in between. It is also close to many Civil War battlefields and historic locations such as Harper’s Ferry. Usually Marlin is intent on visiting some of these venues, but I think we have hit most of them in the past, so there are none on the list this trip.

Monday we headed for a couple of visits in North Carolina. Our first stop was with Becky Miles, who recently moved to Chapel Hill with her friend Megan. They share a great apartment in a complex of 7 or 8 three-story buildings surrounding a pool and clubhouse. Becky landed herself a job at the University of North Carolina and Megan is studying at Duke University. Great life for these 20 something girls. Brings back lots of memories. The best part was when we went out to dinner with Bec and had the entire evening to visit with her alone, instead of sharing attention with all the other members of her family.

Tuesday, January 6, 2009
The next morning we stopped to visit Louise Sikes in Snow Camp, which is a small rural town about an hour outside Chapel Hill. Louise, who was named after my mother, is a cousin, and I still have memories of stories told by my mother about her and her brother, who came out from Dorchester to Randolph in the summer for a country vacation. This was long before I was born, but the tales were repeated so often that I feel like I had been a participant somehow. She does’t get many visitors from relatives in the north, so she was excited to see us. We reminisced for a few hours that afternoon then headed further south. 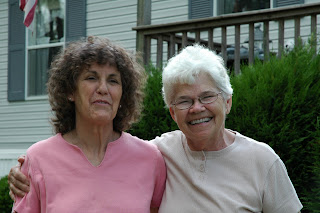 Our destination for the day was Huntsville Alabama, but just before reaching Ashville North Carolina we decided to visit “Biltmore” the estate of George Washington Vanderbilt. This 8,000 acre estate and house was completed in 1895 and is the largest home in America, boasting 250 rooms including 61 bedrooms, 26 servant rooms for single women only, married help had to lodge in town, and 43 bathrooms.

Beginning with the three mile drive through the extensive grounds designed by the famous landscape artist Frederick Law Olmsted, the size and elegance of the estate is almost too big to comprehend. The tour guide said that Vanderbilt purchased 125,000 acres of bare hills after his first visit to North Carolina, constructed the house and grounds while still a bachelor, then three years later brought his new bride there to live in1898. The entire house had electric lights and modern plumbing, with call bells in every room, and a clock system that was synchronized from a main station in the kitchen. 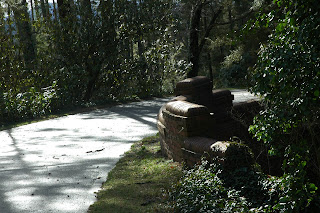 One bridge on the entrance road

Unfortunately, they do not allow photos inside the house. The tour begins at the Main entrance, which opens onto an inside Winter Garden, complete with glass ceiling, fountains, and bright red poinsettias tucked among lush green plants.
The banquet hall is 72 feet long and 42 feet wide, but the astounding feature is the height, which soars up 7 stories high. Three enormous side-by-side fireplaces grace one end of the room, with a balcony and Skinner pipe organ at the opposite end. The walls are covered with 400 year old Flemish tapestries that were appreciated by guests during the routine 7 course meals that were served in the room. 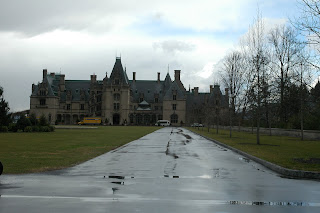 Visitors are allowed in 13 of the Main floor rooms, which include a billiard room, a breakfast room, a salon, a music room, a 90 foot long tapestry gallery, featuring three enormous Flemish tapestries woven in 1535, paintings by John Singer Sargent, and a library with more than
10,000 volumes. Vanderbilt kept a log, beginning at age 12, that documented the 3159 books he had read. We were told that a secret panel door in the billiard room opened into a suite of rooms for bachelors, who, according to etiquette of the day, could not sleep in the same part of the house as unmarried women.

The tour continues up the grand four-story marble staircase, through family and guest bedroom, sitting rooms, servants’ bedrooms, linen closets, an observatory. The rooms are all furnished with original furnishings and priceless artwork by more famous artists such as Renoir.

The basement offered an interesting look into the workings of such an extensive household where all linens were washed and ironed by hand, and all food came from the working farm on the premises. Apparently, the Vanderbilt’s were very good to their hired help. They were provided with private bedrooms, food, uniforms and training necessary to do their jobs well. The staff had their own dining room, where they were served three meals a day.

The basement, in addition to the necessary spaces for cooking, cleaning, preparation, and storage, also included a bowling alley and a 9 foot deep swimming pool with underwater lighting. There is an entire corridor lined with dressing rooms for guests to suit up for bowling and/or swimming. Imagine the servants required to help the ladies into their multiple daily changes of clothing that was necessary for this level of socialization at the turn of the century

We spent four hours following the audio tour guide up, down, around, and through five levels in this amazing house. It is so immense and convoluted that it is hard to imagine how it was ever designed to be as functional as it is portrayed to be. But the house was only part of this extravagant residence.

The exit road lead down past a vast azalea garden into the formal walled garden and conservatory. This time of year the outside sleeping gardens were not much to look at, but inside the multi-wing green house, nature was at her best, showing off every imaginable green and flowering plant.

After the conservatory, the road continued on past the Bass pond, the winery, the barns and the Biltmore Inn where you can stay for $299 to $599 per night, then back out to the real world. 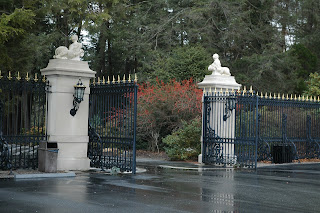 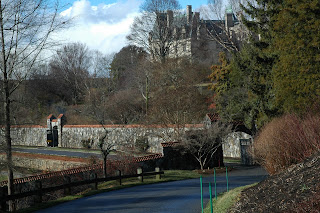 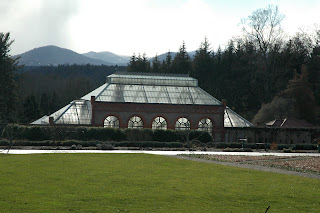 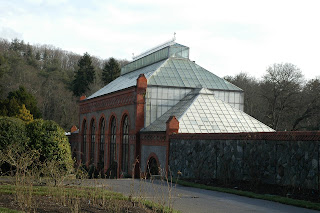 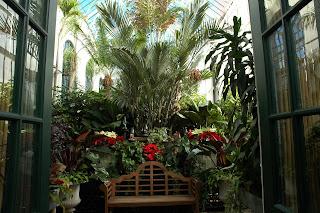 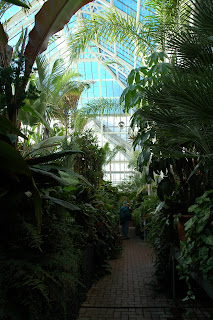 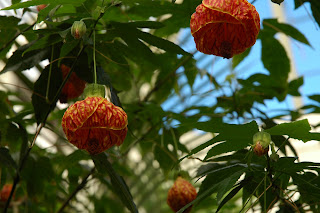 The conservatory was full of unusual plants. This was my favorite, looks like a lampshade. 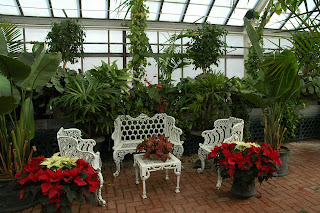 There were many quiet seating arrangements in and around the six wings off the main conservatory. 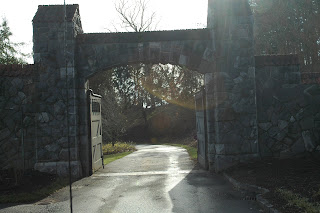 Gate out of the garden

George Vanderbilt died in 1914 when his only daughter Cornelia was 14 years old. His wife Edith, sold 87,000 acres to the State of North Carolina, which became Pisgah National Forest but she continued to call Biltmore her principal home until 1924 when Cornelia married. In 1930 the estate of Biltmore was opened to the public, not only to share this treasure with others, but to provide a source of income to cover the expense of upkeep and preservation

Today the great grandchildren of George Washington Vanderbilt oversee the operation of Biltmore and the current extensive restoration of unseen parts of the house. The tour includes several films about the process of matching fabrics and wall coverings that duplicate original hangings and are being made at the same businesses in France that produced the originals. It is a bit pricey, but I recommend this as a “must see” if ever in Ashville, NC. One bridge on the road of the estate


Our next three days were spent in Huntsville, Alabama with an old, old, old, friend from my childhood, Kathy Gallagher. I don’t mean she is OLD, but our friendships goes back to our days when we were being pushed in strollers by our big sisters. Our time overlapped with one of her older sisters, Theresa, and her son and grandson, so it was a real family affair.

Me, Kathy and Theresa 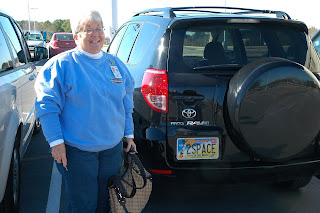 Kathy works for NASA. Check her license plate
While in town we visited the new building at the Space Center that houses an entire Saturn V Rocket. The pictures cannot convey the real size of this rocket that is suspended on it’s side above your head. There are pictures and bios of the astronauts who flew on all the Apollo flights that were powered by this Saturn V rocket. The displays brought home the passage of time since most of these men were born in 1930 and flew in the 60’s and 70’s when space flight was an exciting new-born infant. The display allows you to see how each stage separates and the next piece has its own engine. Imagine all the millions and millions of parts there are in each section that could go wrong. An amazing piece of technology. 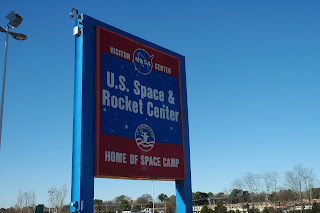 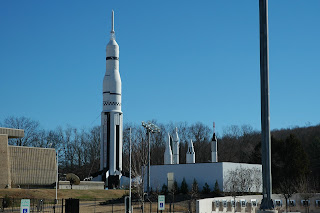 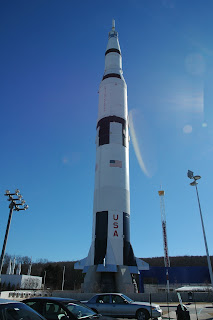 A Saturn V outside the space center 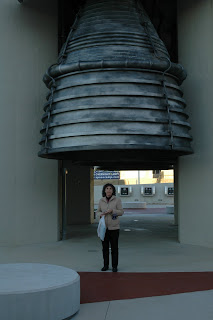 I am standing under the engine on the above model 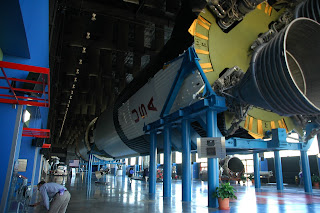 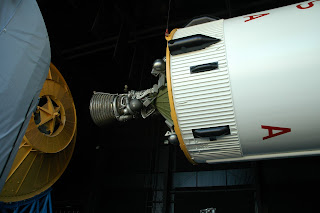 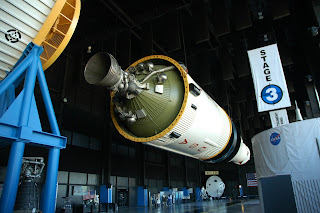 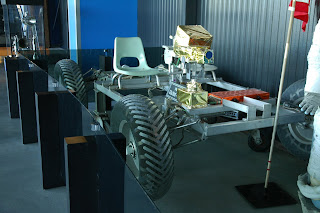 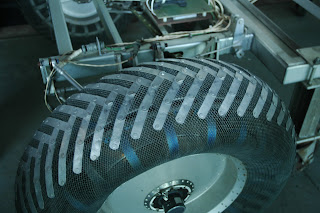 The tires are metal mesh 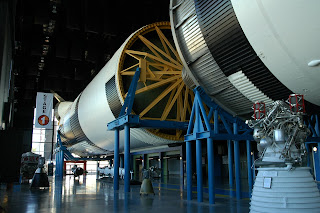 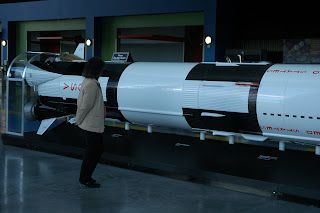 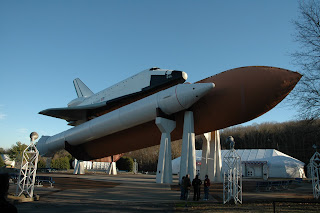 A shuttle model, mounted for takeoff


There were some models of the new Ares rocket that is being designed for future flights to the moon and Mars, but only a limited amount of information is available about this project because it is still in the changing design stage. The shuttle is only going to make 8 or 9 more flights before it is retired to make room for this new project. 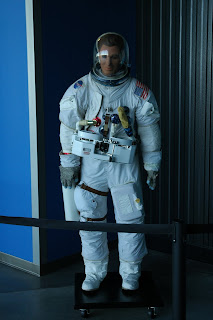 Is this Jacob Cook?

Jacob, study hard so you can be part of the new and emerging wonders in space that are coming along today and tomorrow.
It will be hard to top that visit, but we had one more stop in Alabama before going into Florida. In fact, Lillian, Alabama, is on the gulf coast, right over the bridge from Pensecola Florida. Several cousins live in this tiny town and we always stop for a quick hello when in the area. It is fun to listen to their childhood memories about when they grew up in the same neighborhood in Illinois, all went to the same small school, and were related to most of the other kids in the school’s population. Somehow, four of them ended up here in Lillian.
Our visit included a stop at the beach, where Elmer does maintainance for beach property. Going to work here every day would be tough! 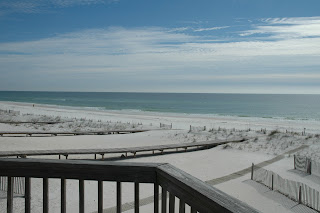 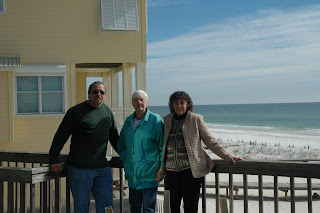 Elmer & Judy Covert and me
After another long driving day, Wednesday January 14th, we pulled into the building where we will be staying with Linda and John Miles. We spent the next few days getting settled and familiar with the area. This complex has 2 ½ miles of trails through a nature preserve that surrounds a large development of condos and villas. This makes it easy to step out the door onto paved paths and get that needed exercise every day. One section becomes a boardwalk out into the bay, with a launch spot for kayaks. Looking forward to daily walks and many many bird sightings. I will attempt to be more prompt with postings, baring unforseen computer difficulties. Please, keep in touch.
Posted by cooktravelogue2007-8.blogspot.com at 2:26 PM