Well, as predicted, we took the fast lane home, arriving here on Sunday April 27. Our only stop was at Moline, Illinois for a quick visit with some uncles and cousins.

We did spend a morning with James and Shellie at their new home in Auburn, Maine. When we left in January, they had barely moved in and only had a cluster of boxes everywhere. It was nice to see it all put together. Shellie has a great talent for decorating. Again we neglected to take any pictures.

It took us the first week to unpack, put everything away, and clean the camper. It was no wonder that the rear end of the truck sloped down 6 or 8 inches. After unloading, it is level again. With all the snow reports we had received over the winter, I was somewhat surprised that there was none left. When we walked down back this weekend, however, there were still some patches in the woods. 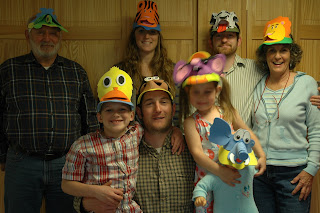 This past weekend James, Jed and families were here. As you can see, we took some family photos, adding a little whimsy to the mix.


On Saturday night the kids had brought their tents and wanted to have a cook out at the fire pit and camp there. All was fine until it began to rain about 3:00. Well, that did not slow them down. they saw no reason to change plans, so we cooked our hot dogs over the fire in the rain. Jed could not convince them to sleep in the house, so they put a tarp over their tents and had their camp out. Marlin and I choose our nice cozy bed. Guess it made their trip because the next morning they both said they would like to live here! 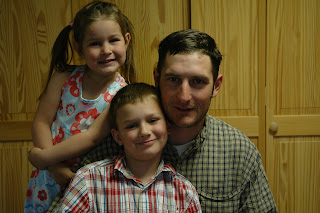 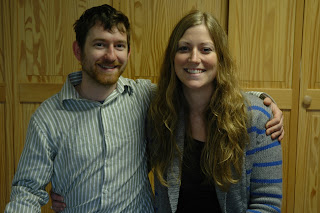 
Well, we are back into home projects. Marlin spent a couple of days repairing the lawn mower and I have been doing yard work. The weather is a magnificent 70 degrees and sunny. Looks like this is the end of a fairytale adventure.

When we take off again, for who knows where or when, I'll continue this or a new blog. Thanks for tuning in and sharing our travels. Hope you enjoyed it as much as I liked putting it together. Keep in touch, Judy & Marlin
Posted by cooktravelogue2007-8.blogspot.com at 7:57 AM